A mother of nine who started medical school when her youngest child was 4 years old graduated with her medical degree and plans to be a neurosurgeon.

Sarah Merrill graduated this month from the Mayo Clinic Alix School of Medicine in Phoenix, Arizona, with her husband and nine kids, who now range in age from 20 to 8, by her side.

Merrill and her family are now moving to Indiana, where she will begin her residency in neurosurgery at Indiana University next month.

"It's going to be a new challenge, a new adventure," Merrill told "Good Morning America" of her upcoming residency. "But everybody is on board and I think we have a great support system."

Merrill, now 41, said her journey to medical school began at age 17, when she entered Dartmouth College as a pre-med major.

She then met her husband, got married and had a 5-month-old daughter by the time she graduated from Dartmouth. 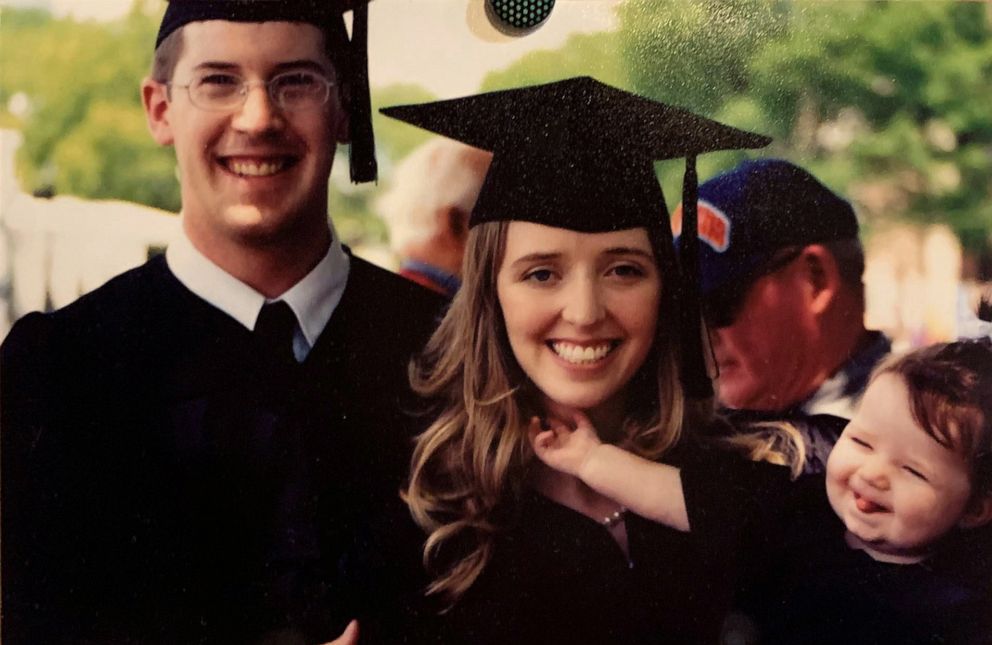 Courtesy Sarah Merrill
Sarah Merrill poses with her husband and their daughter at their graduation from Dartmouth College.

Merrill said she took the Medical College Admission Test (MCAT) while pregnant with her daughter and had plans to go straight into medical school after college, but changed her mind and decided to be a stay-at-home mom while her daughter was young.

Then, Merrill said she and her husband began to grow their family.

"We weren't necessarily going for a large family, in particular, in our planning, but that is what we did," she said. "We ended up having four daughters and five sons, and we had all nine of those kids in 12 years."

While raising her kids, Merrill said she tried to keep one foot in medicine by doing some part-time work in medical research. When her youngest child was 2, Merrill decided to go back to school.

She said she first thought about going to school part-time to get a master's degree, but then decided to follow her original dream of attending medical school.

"I was 34 and I decided to go back and start taking some more recent coursework and I had to retake the MCAT," she said. "I remember studying for the MCAT when my two youngest were 2 and 3 years old and my 2-year-old would climb on me like a mountain while I was trying to take practice tests."

When Merrill was accepted at the Mayo Clinic Alix School of Medicine, she and her family moved from Pennsylvania to Arizona so she could attend.

"Before I even applied to medical school, we had a big family meeting and everybody got to voice their opinion about it and we explained to them what it would mean," she said. "They all gave it a big vote of support at the time." 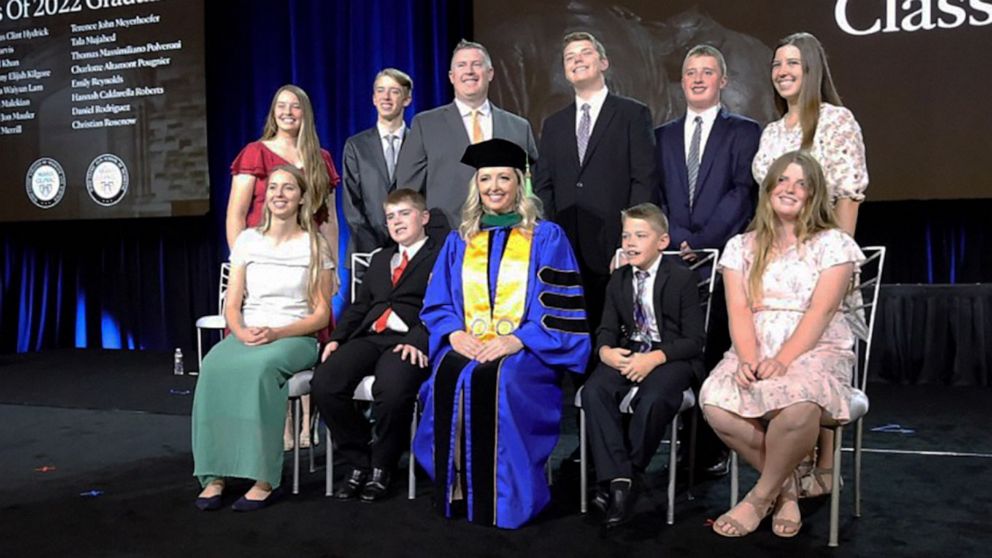 While in medical school, Merrill said she relied on a village of support, including her mom, who moved to Arizona to help, and her husband, who was able to keep his job and work remotely from Arizona.

"A lot of times my teenage daughters would say, "Hey, mom, let's have a homework party,' so that's what we do for fun," she said. "We'd have snacks and they'd be doing their homework and I'd be studying for medical school."

Merrill said she felt lucky to see her studies inspiring her children, including seeing her 11-year-old daughter want to become a surgeon and overhearing her teenage son tell his friends, "My mom's so cool. She's going to be a brain surgeon."

At school, Merrill said she went from being the only mother in her class at the beginning of medical school to being one of three moms in the program by the time they graduated. 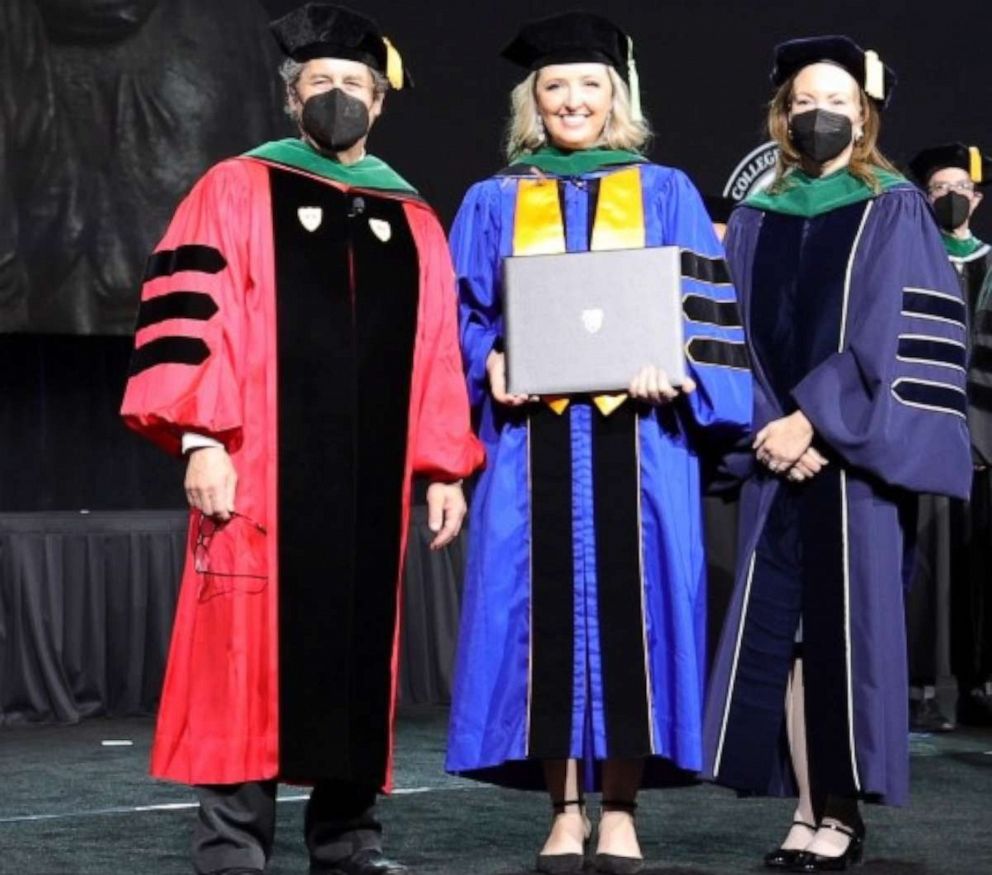 While it kept her busy, she found being a mom made her a better medical school student and ultimately doctor.

"Waiting so long to do this, I think, made me appreciate it more and made me enjoy it more," said Merrill. "And once I got into my clinical rotations, I noticed that I had a lot of life experience that helped me connect with a lot of patients, especially on my pediatrics and OBGYN rotations."

Dr. Michele Halyard, a radiation oncologist and dean of the Mayo Clinic Alix School of Medicine, said Merrill was known as a focused and dedicated student throughout her four years of medical school.

"I was very impressed from the very beginning that she would endeavor to undergo the rigors of medical school education as a mother, let alone a mother of nine," said Halyard. "Having a mother of nine going into medical school and making it work really speaks, I think, to tremendous support from her family, including her husband and her kids, and tremendous organizational skills."

Merrill's next step into a neurosurgery residency at Indiana University will take her into a male-dominated field where only 5% of board-certified neurosurgeons are women, according to data shared by the American Association of Neurological Surgeons (AANS). 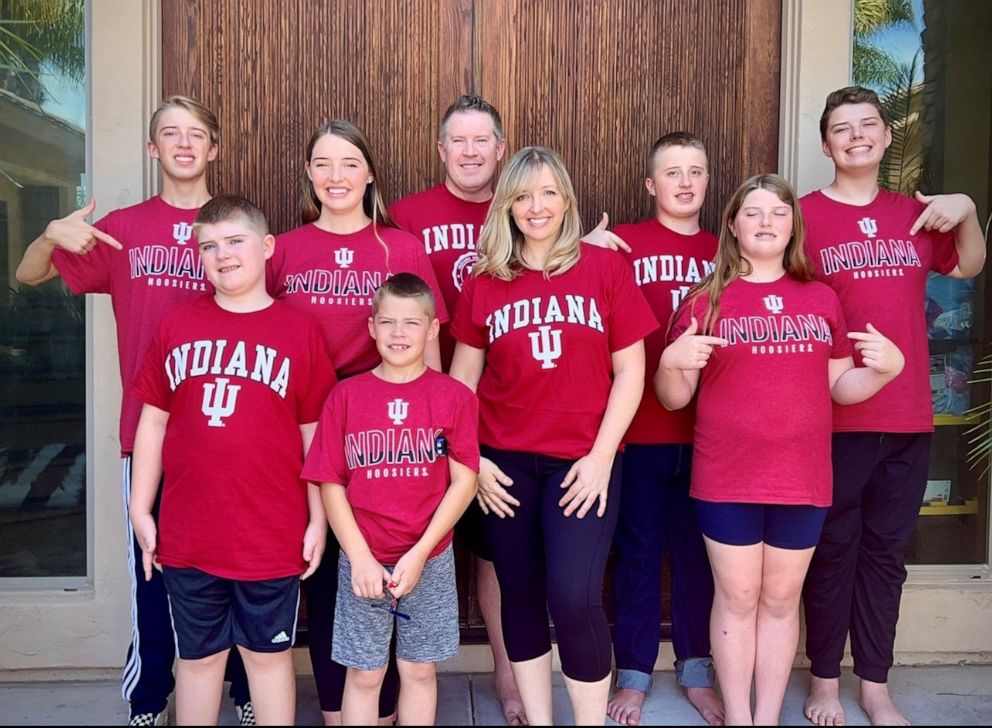 Courtesy Sarah Merrill
Sarah Merrill poses with her husband and children in t-shirts for Indiana University, where she plans to complete her residency in neurosurgery.

Halyard said she believes Merrill will have no trouble getting through her residency, saying, "If you can make it through having nine children and keep your sanity, neurosurgery residency should be a piece of cake because there's no amount of stress that you can't handle."

Merrill said she explored choosing a specialty that would be more family-friendly but, again, choose to dream big and follow her original passion. She majored in neuroscience for her undergraduate degree at Dartmouth.

It's the same advice she would give to all women, including moms, she said.

"Set the goals that are what you're really passionate about, that you would love to do and want to do, and once you've set that goal, then it helps to think small," said Merrill. "If you know what your priorities are, focus on the next step and then you'll get where you want to go."