A mother is speaking out after she claims her 2-year-old daughter was deliberately ignored by a Chuck E. Cheese employee on Saturday at the Route 23 location in Wayne, New Jersey.

The family was attending a birthday party at the Chuck E. Cheese location when the alleged incident took place.

In a video of the incident, which was posted Sunday on Twitter, a costumed Chuck E. Cheese character can be seen giving high fives to children while walking in front of a small stage. 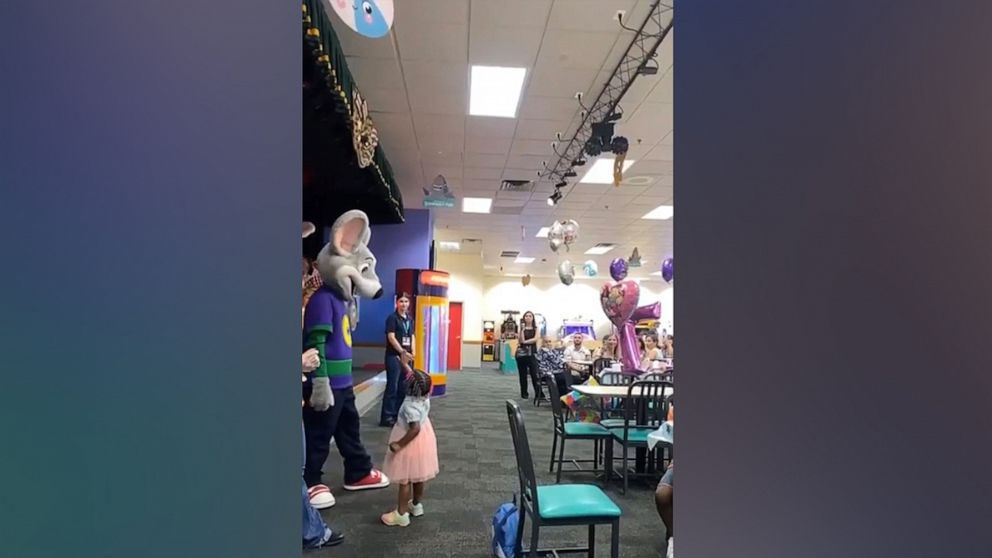 "There were a bunch of caucasian children ... that were on stage that received a high-five. My Black child was the one to get ignored," Safa's mother Natyana Muhammad told New York City ABC affiliate WABC.

"When she turned around she just was excited to see him," Muhammad continued. "She saw that he was giving all the other kids high-fives and she put her hand up, it was her turn, but he put his hand in and then down and then acted like he didn't see her."

Insistent on getting the character's attention, Safa continued to hold her hand out waiting for the employee in the Chuck E. Cheese costume to acknowledge her, to no avail.

Muhammad told ABC News in a separate interview that she had "tapped [the character's] shoulder to let him know that Safa was standing in front of him" but claimed the employee "just ignored me too."

"That was my first time actually witnessing someone, you know, ignore her or make her feel like she's invisible," Muhammad added, speaking with WABC.

Chuck E. Cheese, a subsidiary of Apollo Management, shared a statement with WABC following the incident.

"Chuck E. Cheese is saddened when any family or child has a less than perfect experience," the written statement read. "We want to thank the family who brought this to our attention at our Wayne, NJ location and for giving the onsite manager an opportunity to apologize and address their concerns in person. As home to millions of families and kids every year that celebrate the big and small milestones, including fun, our goal is to create an inclusive experience for children and parents of all ages, races, ethnicities, religious backgrounds, and learning differences."

"Our mission is to provide a fun and a safe place Where A Kid Can Be A Kid, and all cast members are trained to ensure that we live up to this promise," the statement added.

Muhammad said she was displeased with the initial response to the incident.

"Gave the onsite manager an opportunity to apologize when she said 'I'm sorry you feel that way,'" she said. "Was that the apology?"

The manager of the Wayne, New Jersey, Chuck E. Cheese declined to comment on the incident to ABC News.

This incident comes in the wake of a report from another family in July who said that their children, who are Black, were ignored by costumed employees at Sesame Place in Philadelphia.

The family in that incident joined other families in a class action suit against the theme park seeking $25 million and alleging racial discrimination. Sesame Place told ABC News in a statement at that time that the company was reviewing the lawsuit, "[looked] forward to addressing that claim through the established legal process" and was "committed to deliver an inclusive, equitable and entertaining experience for all our guests." 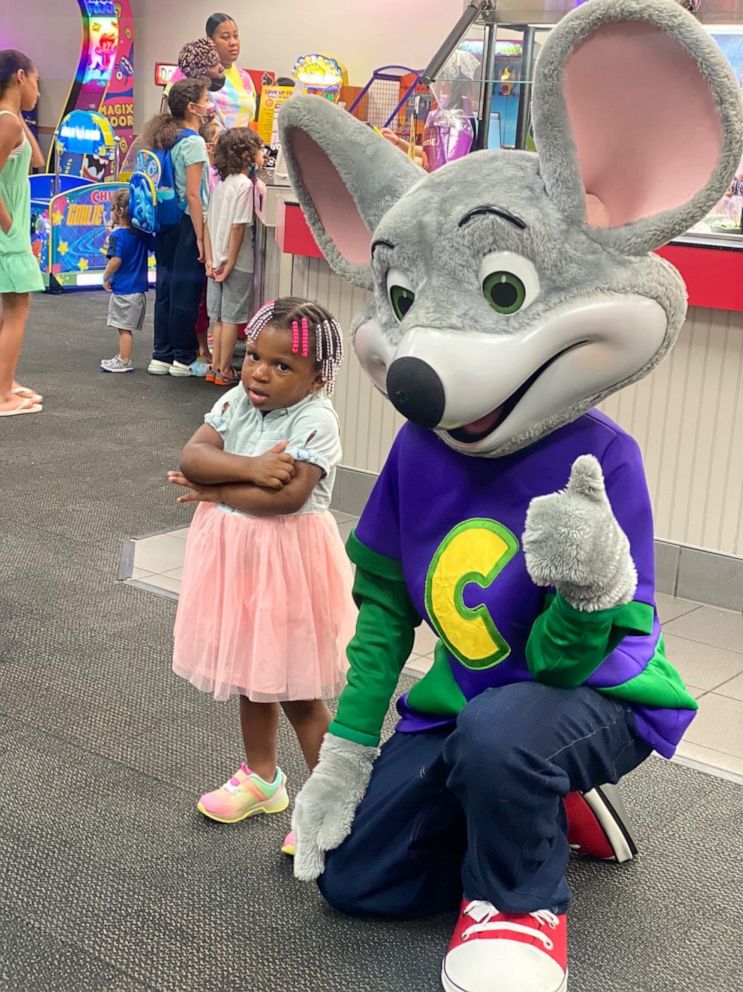 Natyana Muhammad
Natyana Muhammad's 2-year-old daughter is pictured posing with her arms crossed beside the Chuck E. Cheese character her mother says he ignored her.

After Muhammad brought Saturday's incident to the company's attention, she said onsite leaders offered to have the Chuck E. Cheese character pose for a picture with 2-year-old Safa. According to her mother, Safa's "demeanor changed from ... excited, happy, jumping, high-five, to -- when it was time to take a picture -- just standing beside him."

In that picture, Safa can be seen standing next to Chuck E. Cheese with her arms crossed.

"I hugged her, told her that I loved her and that she never has to come beg for love because she is loved by many," Muhammad said.

Muhammad told ABC News this week that she is now seeking legal representation, following the incident.

"Yes, I actually am in the process of looking for someone to represent us," she said.

Remarking on the similarities between what her daughter experienced and the incident at Sesame Place -- which she said immediately came to mind after the Chuck E. Cheese incident -- she added, "It's like a pattern, unfortunately."

This article was updated to include additional comments from Natyana Muhammad.