Sara Cunningham made headlines when she began offering hugs at Pride parades.

And now, the mother of two, who has since become an unofficial mom within the LGBTQ+ community, has recently been standing in at couple’s weddings when their own families won’t support, or accept, their relationships.

"I think about the parents who might be refusing the day or the occasion -- I'm not here for them. I'm here for these beautiful couples who are starting a family and celebrating that," Cunningham told "Good Morning America." "We have moms all the over the world getting ready to stand in."

Cunningham said her journey began when her son Parker, 30, came out to her and her husband.

"I was frozen in my own ignorance," Cunningham admitted, adding that she had a hard time accepting her son's revelation.

But seeing others celebrate Parker as he lived authentically as a gay man proved inspiring to Cunningham, who would later become a notable advocate for lesbian, gay, bisexual and transgender people.

"He spent his whole life coming out to me," Cunningham explained. "And in 2014, my husband and I stood with Parker at the Oklahoma City Pride parade. It was my first interaction with a community that I fell in love with."

I will fight for my son and our friends lke my hair is on fire.

Cunningham became ordained in 2016 and began officiating same-sex weddings. Of the countless ceremonies over which she's presided, only two of the couples have been straight. 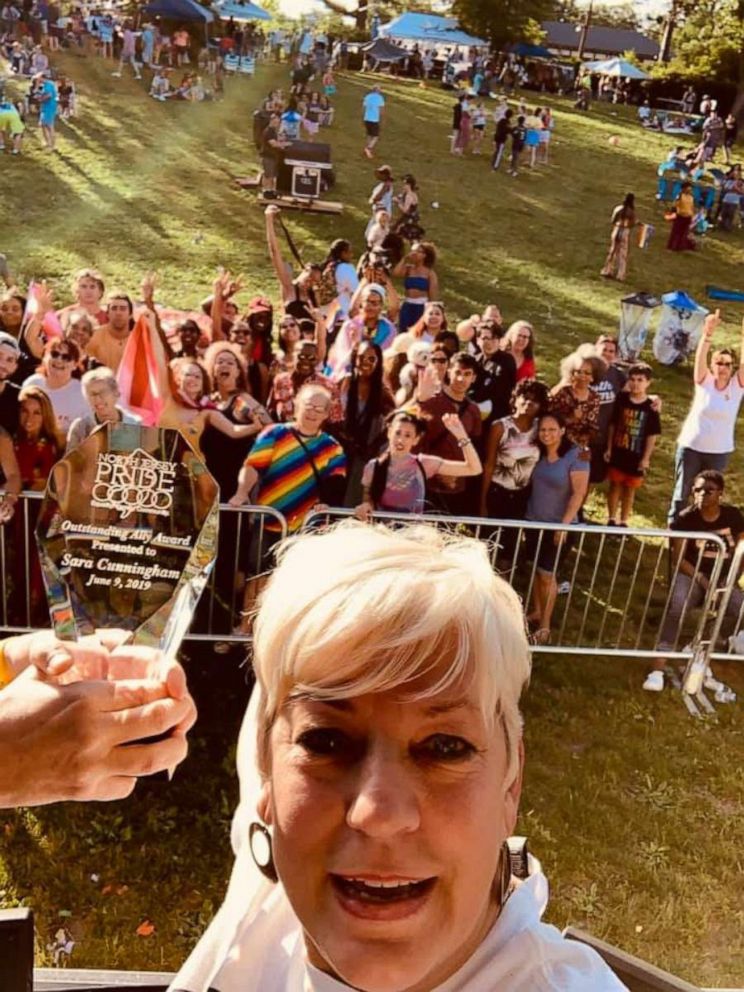 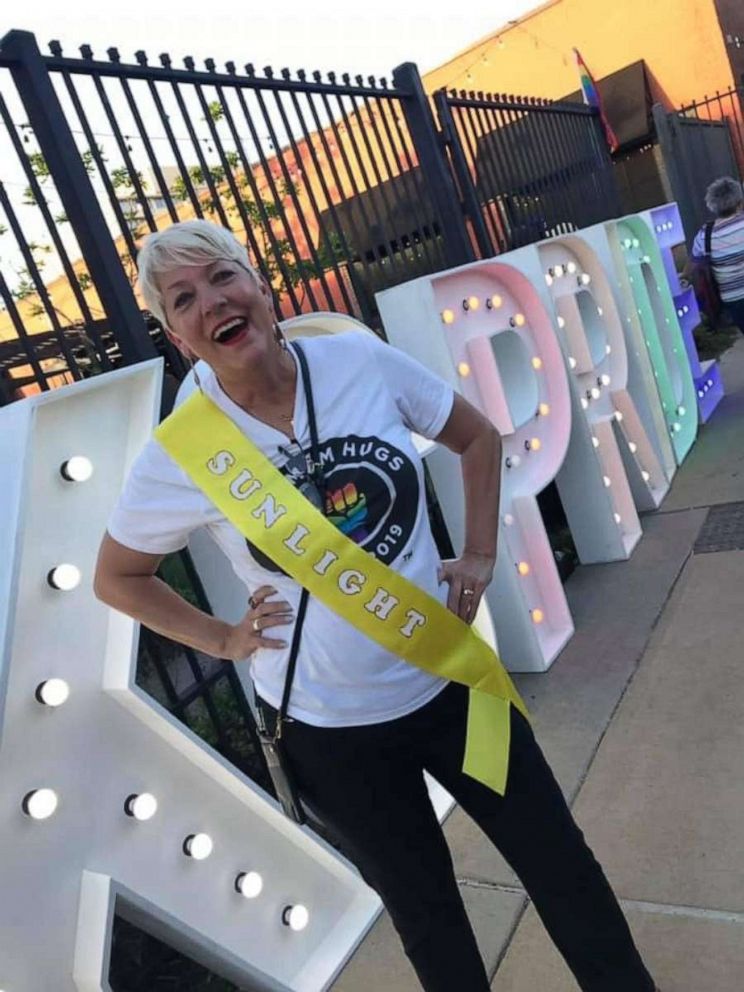 "We are dedicated to educating families, church and civic leaders encouraging them to not only affirm the LGBTQ+ community but to celebrate them," the organization's website proclaims.

"Through getting involved and hearing stories about these people who have been alienated from their families, church and from many parts of society, it educated me on the history of human sexuality and science and evidence and testimony that allowed me to look past my own fear and my own ignorance," Cunningham said. "I don't believe homosexuality is a sin. We have been fueled with this idea through a mainstream, evangelical society."

"We have been duped and it's devastating to the LGBTQ+ community and their families and I'm accountable to that," she added. "I'm accountable, and I will fight for my son and our friends like my hair is on fire."

As Cunningham continued her activism, she received a request from a gay couple whose wedding she was set to officiate last October. 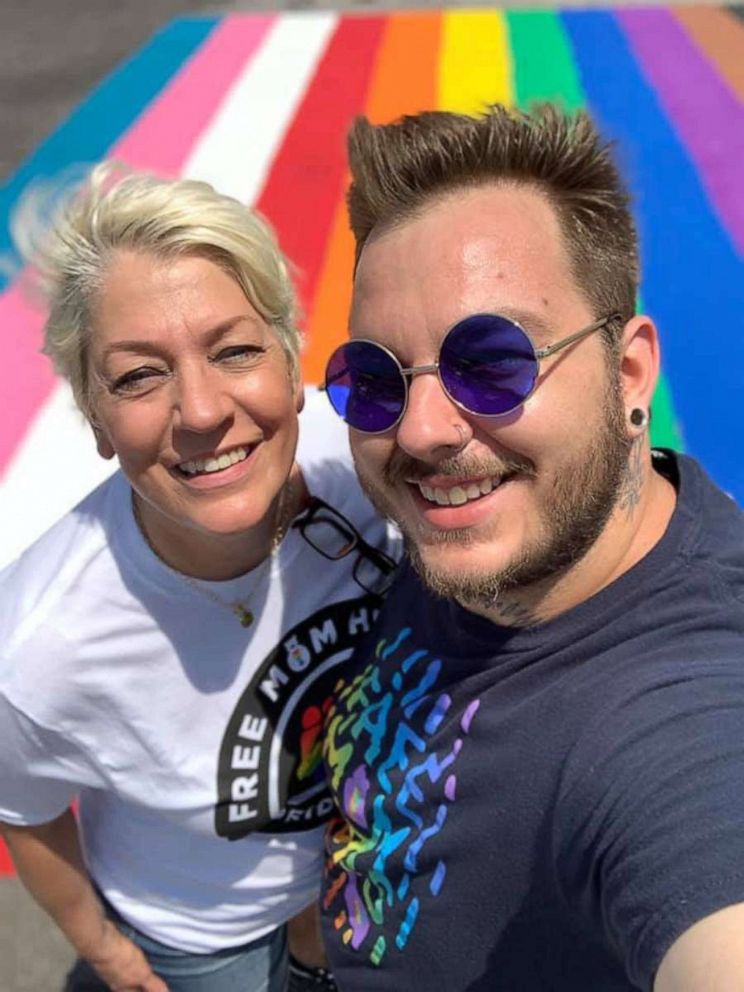 One of the mothers chose not to attend the wedding. As a result, Cunningham agreed to stand in as "mom."

The couple's request came months after Cunningham's post went viral on Facebook, where she posted a "PSA" offering to attend LGBTQ+ weddings when members of the couple's families refuse.

"If you need a mom to attend your same sex wedding because your biological mom won't. Call me. I'm there," Cunningham wrote in the post. "I'll be your biggest fan. I'll even bring the bubbles."

Cunningham's initiative is part of "Serendipitydodah Mama Bears to the Rescue" -- a private Facebook group that offers help to LGBTQ people who need support in their holiday gatherings, stand-ins as affirming moms at same-sex weddings, notes of encouragement, finding helpful resources and, among other things, a phone chat or texting.

After her post gained worldwide attention, Cunningham heard from couples planning their weddings, college students asking for someone to attend their graduations and more people reporting to have unsupportive families who refused to participate t in their children's lives and or milestones.

Cunningham has stood in at three weddings and she has three more in the upcoming future, she said. 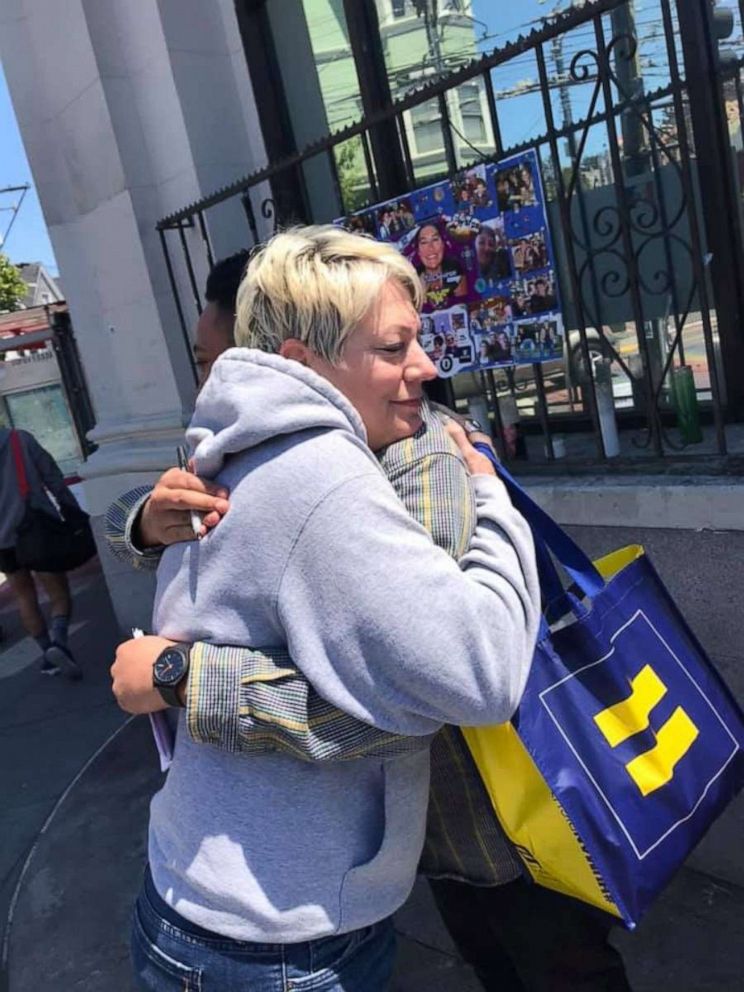 Sara Cunningham
Sara Cunnningham of Oklahoma City, Oklahoma, launched Free Mom Hugs, a group of affirming parents and allies who love the LGBTQ+ community unconditionally, in 2016. She also stnads in for parents of gay couples at weddings.

On June 2, Cunningham was a stand-in mom for Sam Hedrick during his marriage to Haley Hedrick.

I'm here for these beautiful couples who are starting a family and celebrating that.

The Tulsa, Oklahoma, couple met Cunningham through their advocacy circle.

"A friend reached out to her when we got engaged and [learned] my husband's family wasn't going to come," Haley Hedrick, 27, told "GMA." "I identify as bisexual. My husband identifies as transgender and he grew up in an evangelical home environment. Their moral ideologies and beliefs don't allow them to affirm my husband's life and the life that we're building together." 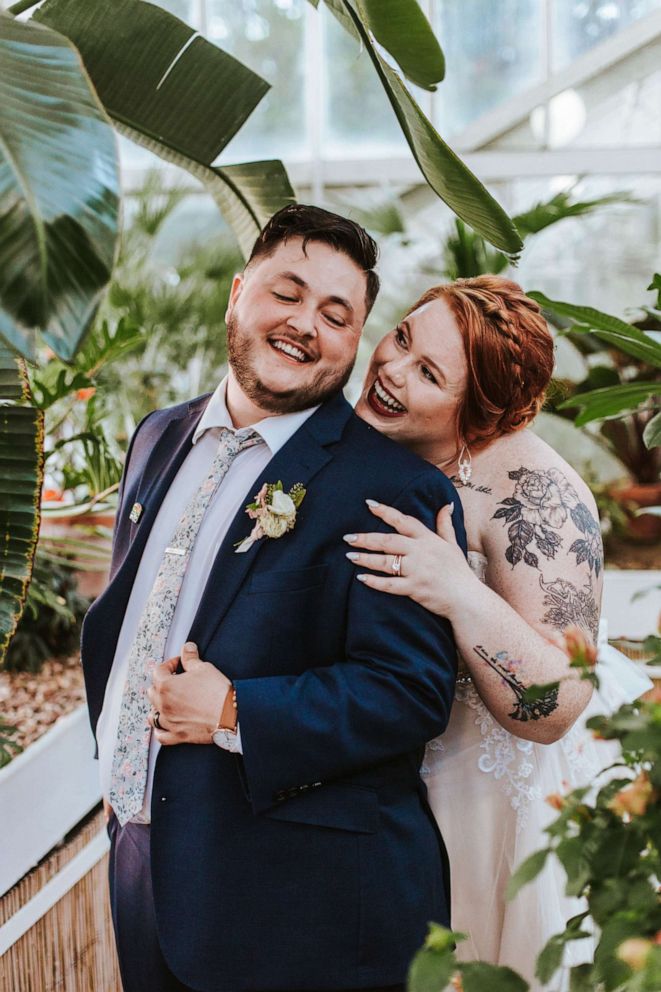 "We have been in our own journeys and really love this life that we built," Hedrick added. "We wanted the people in our lives to celebrate even if his family weren't going to be those people."

Cunningham stood in for Sam's mom. She walked with him down the aisle, gave him encouraging words and even posed for photos with him and his wife. 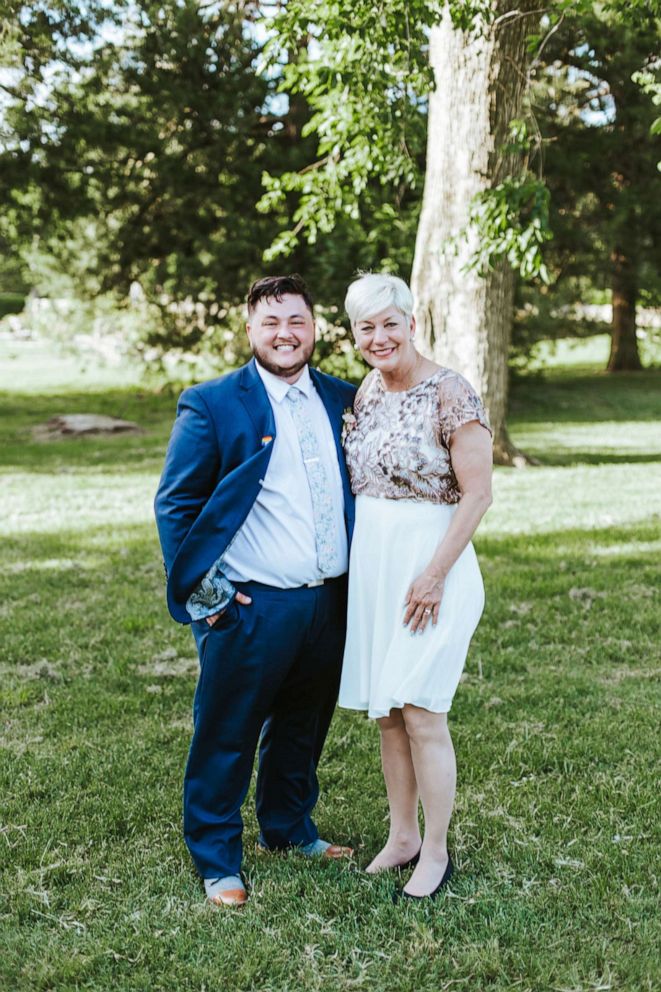 Erika Ryan Photo
Sara Cunningham of Oklahoma City, Oklahoma, stood in for Sam Hedrick's mother as he married on June 2, 2019.

"She told him she was proud of him, said there was nothing to be ashamed of and it was a love worth celebrating," Hedrick said. "She offered him her whole heart in a way his mom would."

Cunningham said her role as a stand-in mom is "bittersweet." 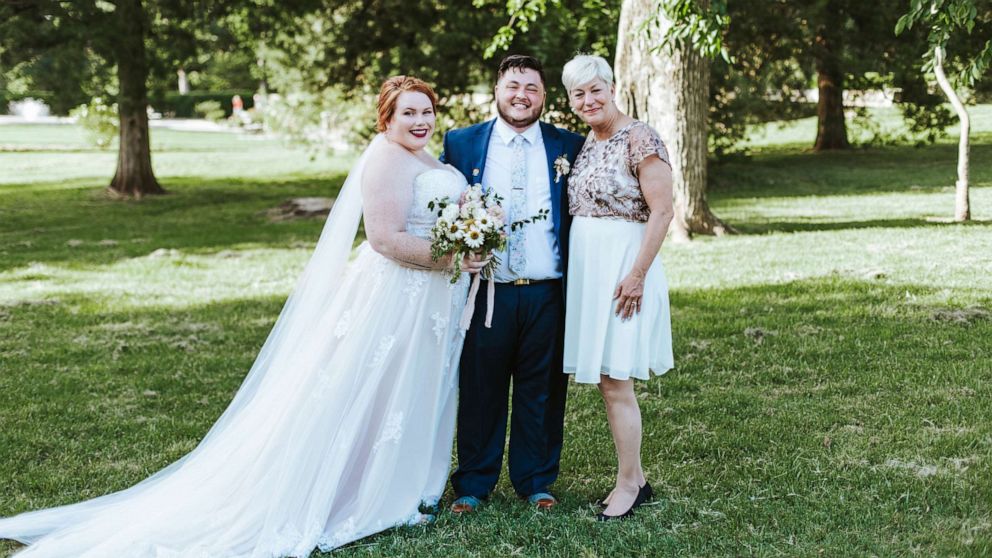 Erika Ryan Photo
Sara Cunningham of Oklahoma City, Oklahoma, stood in at Sam and Haley Hedrick's wedding on June 2, 2019, as a support system for the couple on their big day.

"I am not trying to replace anyone's mother by any means," she said, adding she hopes LGBTQ people surround themselves with people who "love, support and celebrate" them.

"If you don't have those people in your life, then you find them," Cunningham noted.

Cunningham's self-published book, "How We Sleep at Night: A Mother's Memoir," caught the attention of actress Jamie Lee Curtis. Curtis acquired the rights to the memoir and plans to bring it to "Lifetime" in an upcoming film entitled "How We Sleep At Night," Cunninhgam said.