An Indiana mother whose toddler accidentally ingested a button battery is speaking out in hopes to warn parents of this potential risk that could exist inside the home.

The battery, which was approximately the size of a quarter, was surgically removed late September at IU Health Riley Hospital for Children in Indianapolis after doctors said that 1-year-old Mahziere likely swallowed it two weeks prior.

"He brought me the battery and I broke down," mom Ta'Sha Garrett told "Good Morning America" of the surgeon who removed the battery. "I knew the severity of swallowing batteries. I didn't think that would happen to us..I'm really careful when it comes to things like that."

Garrett said Mahziere had still been eating well, sleeping, playing, laughing and otherwise behaving, until one day she noticed his breathing was off.

"That day I had picked his brother up from school and he was really lethargic," she said. "Everything about him was moving slow. He ended up sleeping on the car ride home."

Editor's Picks
MORE: I'm a cautious mom who had a hot car scare. Here's my plea to parents and lawmakers.

Garrett said when they got home, she heard Mahziere whimpering in the other room. She went to check on him and saw bubbles coming out of his mouth. She and Mahziere's grandmother brought Mahziere to the local hospital where they tried to administer a COVID-19 test, though Garrett insisted they take x-rays, she said.

Mahziere was transferred to Riley, where medical staff weren't exactly certain of what Mahziere had swallowed until surgery was performed. 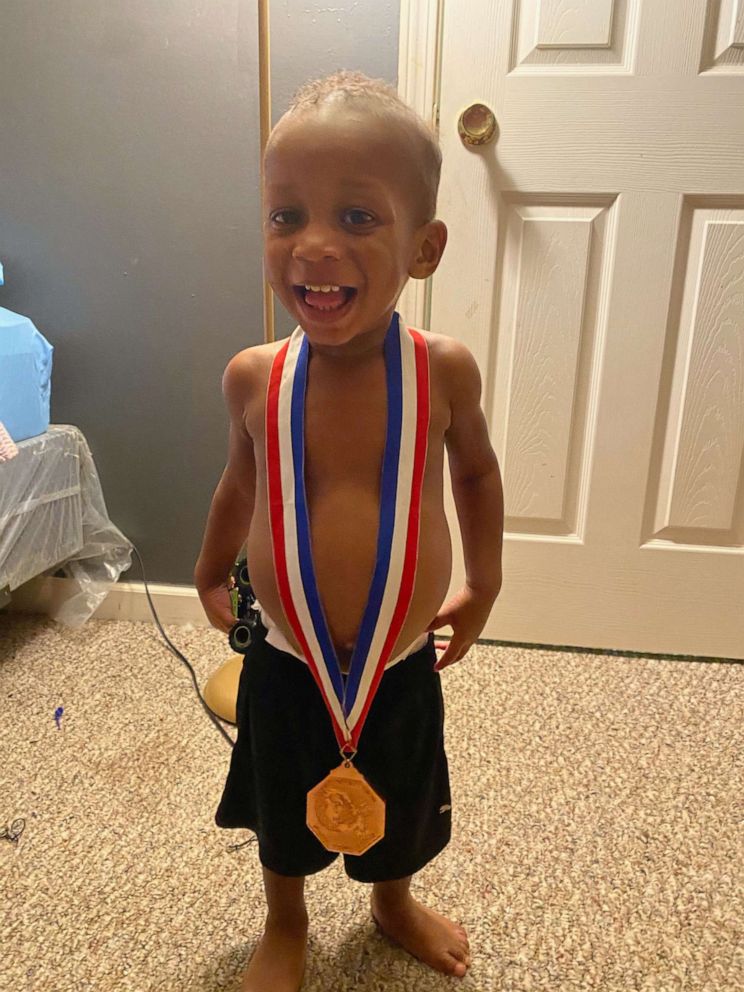 Ta'Sha Garrett
A toddler named Mahziere, 1, accidentally ingested a button battery, which was surgically removed in late Sept. 2020 at IU Health Riley Hospital for Children in Indianapolis, Indiana. Mahziere is now recovering after suffering burns to the esophagus.

"Up until then, I was pretty optimistic it wasn't a battery," Garrett said. "I don't have watches around the house."

Dr. Fred Rescorla is the pediatric surgeon who removed the 22-milliliter lithium battery from the bottom of Mahziere's throat near his clavicle. Mahziere ended up being hospitalized for a week and a half.

"His mother, she's a great mom," Rescorla told "GMA." "She knew right away something was wrong...I was a little apprehensive when I went up to see her. When I approached her, she just wept. She never left his bedside."

Rescorla told "GMA" that the actual operation took about 30 minutes, although anesthesiologists had issues getting an airway during the bronchoscopy since the battery burned a hole in Mahziere's esophagus and caused some swelling. 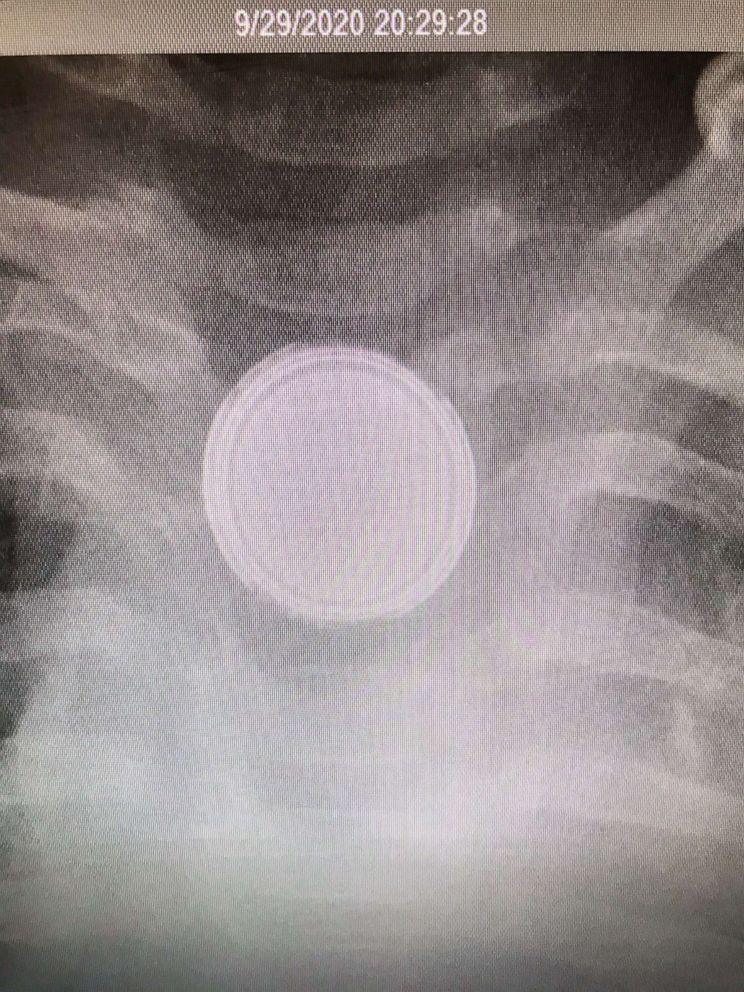 Ta'Sha Garrett
A toddler named Mahziere, 1, accidentally ingested a button battery, which was surgically removed on in late Sept. 2020 at IU Health Riley Hospital for Children in Indianapolis, Indiana. Seen in this undated photo is a picture of the x-ray showing the battery which Mahziere swallowed.

"I think he's doing really well," Rescorla said. "We really want to make sure he doesn't get any narrowing or scarring on the esophagus where it was damaged."

Emily Samuel, program director at the nonprofit child safety organization Safe Kids Wordwide, said on average, more than 6,300 children are seen in he emergency room each year after having ingested a battery.

Children under the age of 5 are more likely to be seen in the emergency room for swallowing a button battery, and toddlers ages 1-3 are at the highest risk for swallowing. This data was compiled via the National Electronic Injury Surveillance System (NEISS) from the U.S. Consumer Product Safety Commission.

"Younger children under the age of 5 are curious and they're actively learning and developing new skills," Samuel told "GMA," adding that children are also exploring their senses, including taste.

"Which is why we often find toddlers putting things in their mouth around the home," she said. "It's important if you have button batteries around the house that you store them in a safe and secure place."

Garrett said the battery that Mahziere swallowed was a battery from a watch. She learned this after Googling the serial numbers on the battery, she added.

Garrett said her son may have gotten a hold of the battery while playing at a relative's house.

Her message to other parents is to be overly attentive to your kids, especially small children. 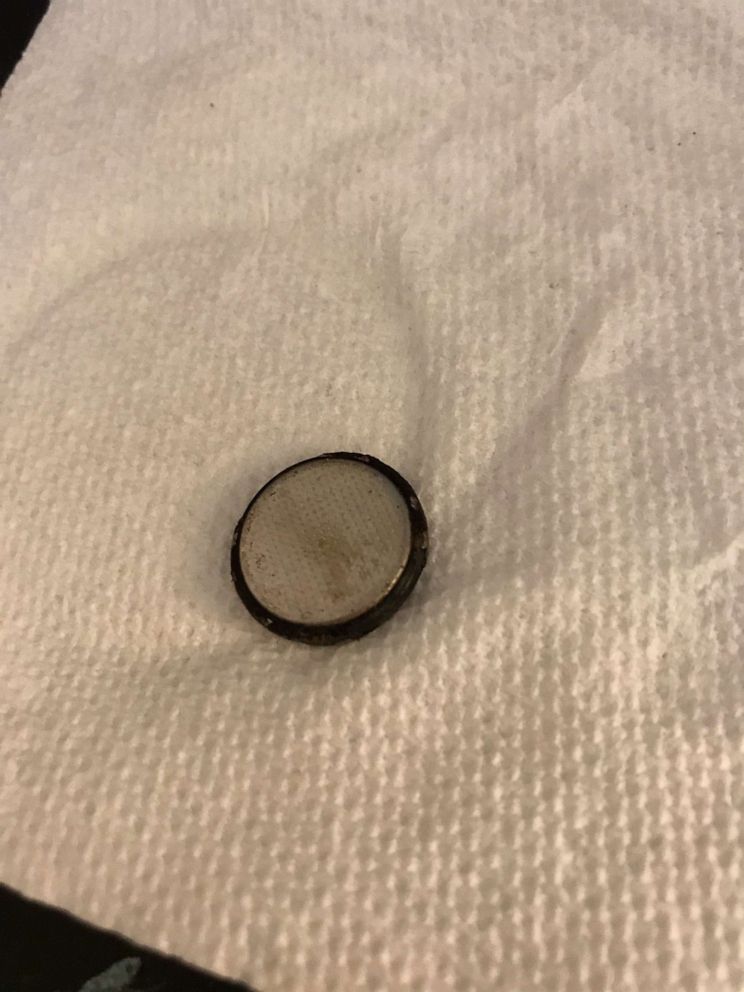 Ta'Sha Garrett
A toddler named Mahziere, 1, accidentally ingested a button battery, which was surgically removed in late Sept. 2020 at IU Health Riley Hospital for Children in Indianapolis, Indiana. Seen in this undated photo is the battery which Mahziere swallowed.

"They move really fast. Even if you think you're watching them, you have to be mindful that kids move quicker than you," Garrett said. "If a lot of times people are watching your kids or your kids are going places, warn others what your child is capable of and getting into. Let them know your child is Curious George."

"It was definitely scary," she added. "I watched him from going to a breathing tube and not being [himself]. It's a very traumatic experience for the child and the parent."

According to Safe Kids, when a button battery is swallowed, the saliva triggers an electrical current.

"This causes a chemical reaction that can severely burn the esophagus in as little as two hours," the organization writes on its website.

In addition, symptoms of battery ingestion could be tricky to recognize but may include coughing, drooling and discomfort. 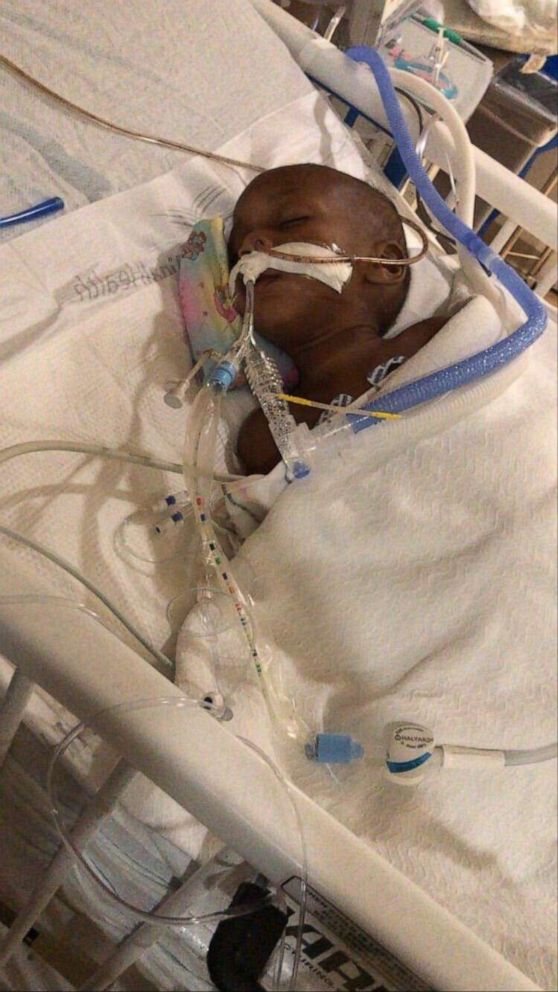 Ta'Sha Garrett
An Indiana mother whose toddler, Mahziere, 1, ingested a battery is speaking out in hopes to warn parents of this potential risk. The battery was removed late Sept. 2020 at IU Health Riley Hospital for Children.

"If you think a child has swallowed a button battery, go to the emergency room right away," Samuel said. "No eating, no drinking and don't induce vomiting."

Here are tips on how to stay safe, according to Safe Kids:

-Keep greeting cards, remotes, cameras, watches, flameless candles and any other items that may contain batteries out of reach.

-Place a piece of duct tape to secure battery compartments.

-Search your home and any place your child goes for items that may contain coin-sized lithium batteries.

-Share this life-saving information with caregivers, friends, family and babysitters.

-If you have any doubts, bring your child to the hospital and request an x-ray.