A photo of a baby's swollen toes is igniting conversations about a little-known syndrome that can be caused by a single strand of hair.

Jill Mraidi of Orlando, Florida, snapped a picture of her son Qasim's foot after discovering a hair wrapped tightly around his toes.

"I was like, 'What the heck is going on? What is this?" Mraidi, a mother of four, told "Good Morning America." "I had him scheduled for a checkup that day. Once I got him there, the doctor looked at it. It was called hair tourniquet syndrome."

Toe tourniquets in particular are rare and dangerous but it's a preventable condition of infants, according to the U.S. National Library of Medicine. Hair tourniquets typically occur when hair becomes entangled in the fingers, toes and sometimes genital area.

MORE: Pediatrician now a mom after adopting 10-year-old patient and his younger sister

In the most extreme cases, the hair can cut off blood supply and the child is at risk for amputation, said Dr. Alexander Davit, a pediatric hand surgeon at Children's Hospital of Pittsburgh.

In 2016, a Kansas father spoke to ABC News after a photo of his 5-month-old daughter's swollen foot went viral on Facebook. That child also had a hair tourniquet, which her mother, a registered nurse, removed with a tweezer.

Editor's Picks
MORE: The controversial water safety technique that could save a baby from drowning

Mraidi suspects Qasim's hair tourniquet fell off when she removed his sock, though his foot was still red and swollen.

Mraidi said she had never heard of hair tourniquet syndrome, even as a former child protection investigator. 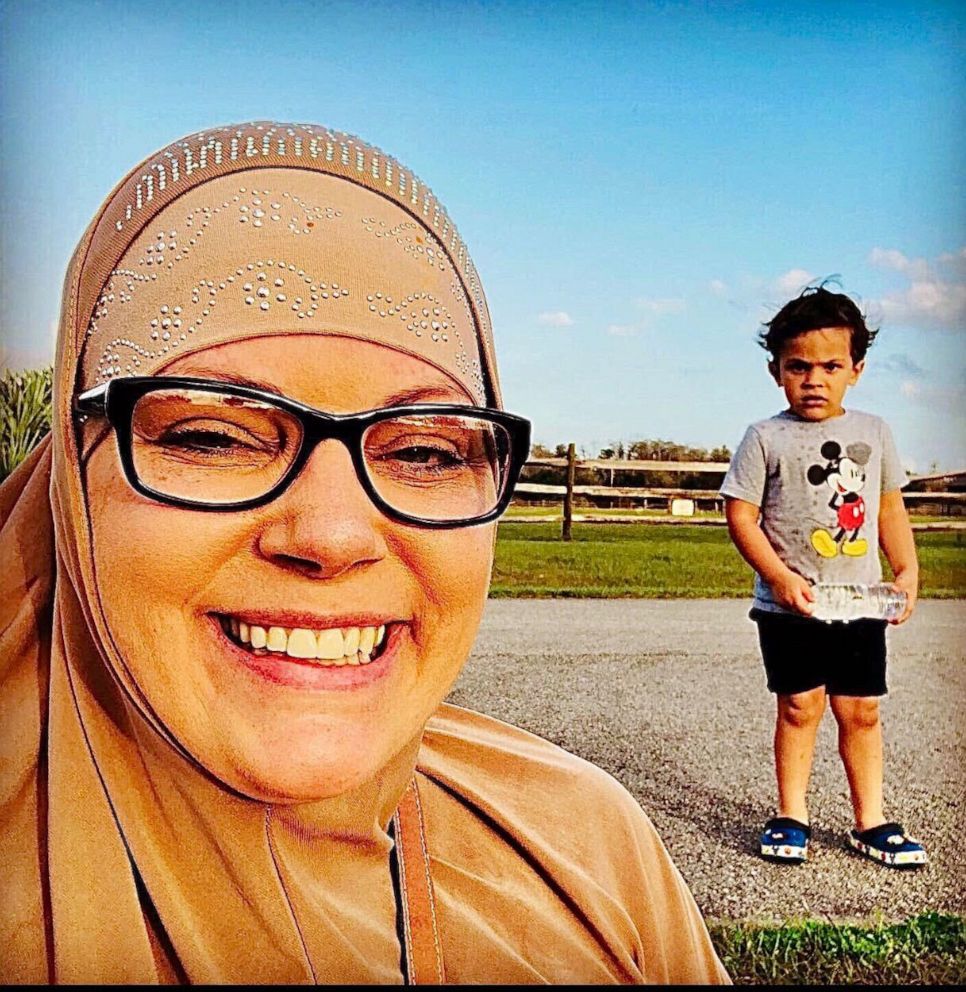 Jill Mraidi
Jill Mraidi, a mother to four boys from Orlando, Florida, poses in an undated photo with her 3-year-old son, Qasim.

Because she was experiencing postpartum hair loss when Qasim was a baby, Mraidi suspects a piece of hair was stuck in the child's sock after going through the dryer.

Davit, who has seen three cases himself, noted that this is the common cause of hair tourniquet syndrome.

"A lot of moms end up losing hair after the pregnancy and that's why [infants] are at risk," he explained.

In an effort to alert other parents, Mraidi shared the photo on Instagram. Qasim, now 3, was an infant when Mraidi posted the image, though it recently gained new life after the Instagram account, Pregnancy Guide, shared the image with its 350,000 followers.

💗 PSA: This is Qasim's 4 month old foot. It was caused by a single strand of hair. It's official name is Hair Tourniquet Syndrome. He is my 4th child and I had never heard of such a thing until today. He was seen by his Pediatrician last week, there was nothing there, he was evaluated by his Physical Therapist 3 days ago, there was nothing there. I bathed him yesterday and I didn't see anything abnormal. Then today, I noticed the indentation in his toes and found a small piece of hair but figured no way it could be from that, so I disregarded it. I called right away for him to see the Pediatrician and within 2 hours he was being seen. When the Dr told me it was caused by I piece of hair, I was in disbelief. He told me how very lucky we are to catch it so soon because it often results in immediate amputation of the affected appendage. It's most common in infants because of the post-Partum hair loss of the mother. Light colored hair is extremely difficult to identify and surgeons often need microscopes to even see it. If you have infants or toddlers in the house, please keep this in mind!!! #growingpains #hairtourniquet. . . . - 📷 ( Via @jilliana_suzanne ) . . . - Tag Someone!

In the comments section, some parents revealed their children had experienced hair tourniquet syndrome as well.

"I'm glad if it can bring awareness," Mradidi said. "This is my fourth baby and I had no idea about it. It would not have entered my mind as a first-time mom."

Here are remedies and signs of hair tourniquet syndrome, according to Davit.

If your child seems irritable or is crying for no reason, check for a tourniquet. Davit said to completely undress them and inspect every inch of their bodies--focusing on the fingers, toes and genital areas where the most common areas hair tourniquets are found.

If one is found, the area may be red, swollen and have an indention where the suspected hair tourniquet is.

What to do if you suspect or find a hair tourniquet

Many tourniquets can be easily unwound, though any concerns should be brought to your pediatrician who may recommend a hair removal product.

"It can look terrible but if you treat it, it's OK," Davit said.

How would a doctor treat it?

If doctors opt for sedation, it's to ensure your child will be as comfortable as possible during the removal process.

"Despite it being an intimidating thing to worry about, in many cases the child won't need surgery," Davit said.