If at first, you don't succeed, try, try again!

That's exactly what Lilia did when things didn't go her way at T-ball games last year and mom Ashley Denby caught it all on video.

Denby first shared the video clip on TikTok last year. She wrote in the caption, "I don't think baseball will be her thing," adding a laughing emoji at the end.

"I thought it was funny," the mother of two from Port Huron, Michigan, told "Good Morning America." "That's just typical Lilia, for us. She's very independent, very sassy. So I posted it to TikTok, and I had never really had a viral video before so I really didn't think it was going to go viral at all. It was mostly just I was sharing it with our friends and family and stuff and then it blew up. And I was so shocked that everyone in the world thought it was just as funny as I did." 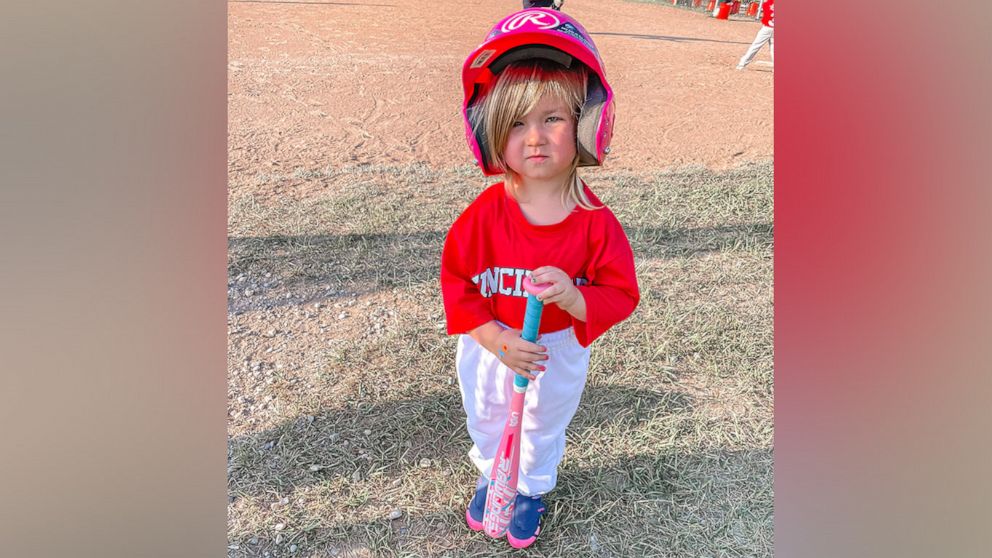 Ashley Denby
Lilia took up T-ball, a modified version of baseball for young kids, last year. Her father was her team's coach.
MORE: This 4-year-old narrating while snowboarding is melting our hearts

Denby is mom to Lilia, who was 3 at the time of the video and is now 4, and son Mason, 10. Her husband Matt, was the coach of Lilia's T-ball team and is also in the video, picking Lilia up and piloting her to first base.

"It was one of the first games. It took her a couple of tries to really hit the ball and once she finally did, she wanted to chase after it and catch her own ball," Denby recalled.

"My husband, her dad was the coach, and he's the one that you can see in that video picking her up and trying to carry her to first base. And then she didn't like that. She's very independent. She wants to do it herself. So you can see her throwing a little temper tantrum there, kicking her legs and then she just kind of pouted and then he set her down."

MORE: Toddler has hilarious 'conversation' with his dad

Denby describes her free-spirited daughter as "pretty athletic" with a competitive streak and also a "big animal lover." Besides playing T-ball, she's also a figure skater and dancer.

"I think she really gets it from her big brother. He's always been into sports. So she wants to be just like him. She wants to try everything that he tries," Denby said, adding that Mason plays hockey, basketball and baseball. 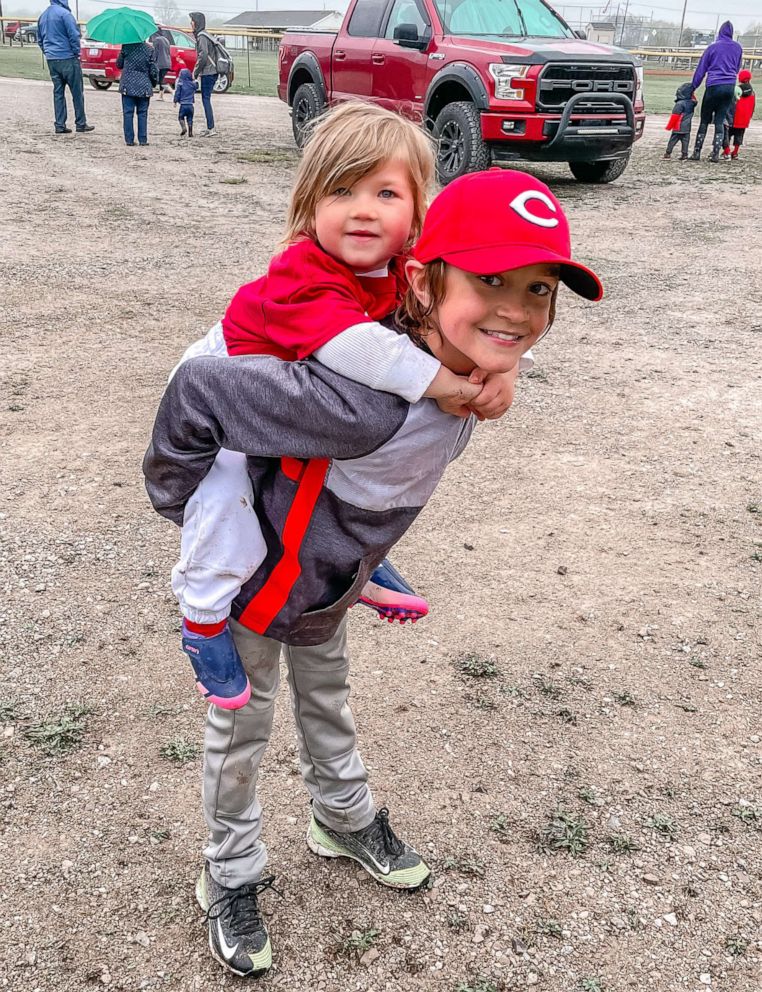 Ashley Denby
Lilia with her older brother, Mason. Denby says Mason has been supportive of his sister's athletic pursuits.

This season, Lilia's giving another team sport a try as well.

"She started getting good at T-ball towards the end of the season, but she decided that she wanted to try out soccer. So we're trying soccer this year," Denby said. 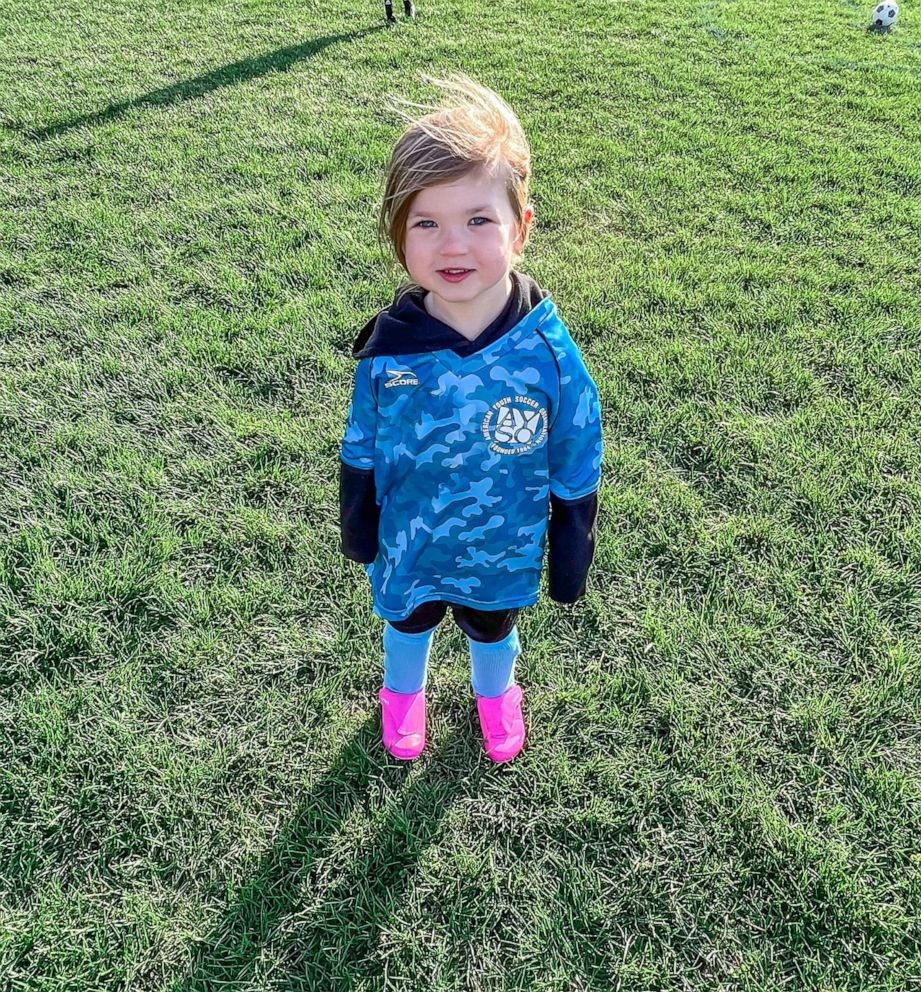 Ashley Denby
This year, Lilia is giving soccer a try and according to her mom, is "doing pretty good at it."

"She's doing pretty good at it. She hasn't scored a goal yet, but she's getting there."

Lilia will be in good hands as her dad is also coaching her soccer team this year.

After sharing her video a few times, Denby said she's received plenty of messages and comments. "I had a couple of negative comments just about like, 'Oh, this is why kids shouldn't be in sports. … They don't know what they're doing,'" she said.

"And to that, I just say, you know, that's why it's important to start kids in sports at a young age like that, because they're at the perfect age to learn. You can really mold their minds at that age, you know, they absorb everything at that age. So, yeah, (it's) just gonna be chaos because they're 3 and 4 years old and they're just learning, but practice makes perfect," Denby said.