Mothers across the U.S. are banding together to respond to the baby formula shortage emergency and execute short-term solutions in local communities while corporations and the federal government scramble to address the crisis on a national level.

Kerissa Miller, a mom from Kennewick, Washington, started the Find My Formula, Tri Cities WA Facebook group on May 11 to pay it forward after another mom helped her by donating much-needed formula for her 6-month-old son.

Editor's Picks
MORE: 'Operation Fly Formula' to bring 1.5 million bottles worth of baby formula to US

Miller’s son MJ was born two months early and needs to be fed a special baby formula made specifically for premature babies. Similac’s NeoSure is one of the formulas impacted by the Abbott Nutrition recall in February. Miller said she isn’t able to breastfeed her son and her son’s pediatrician also told her there weren’t any other formula substitutes that would work for him. 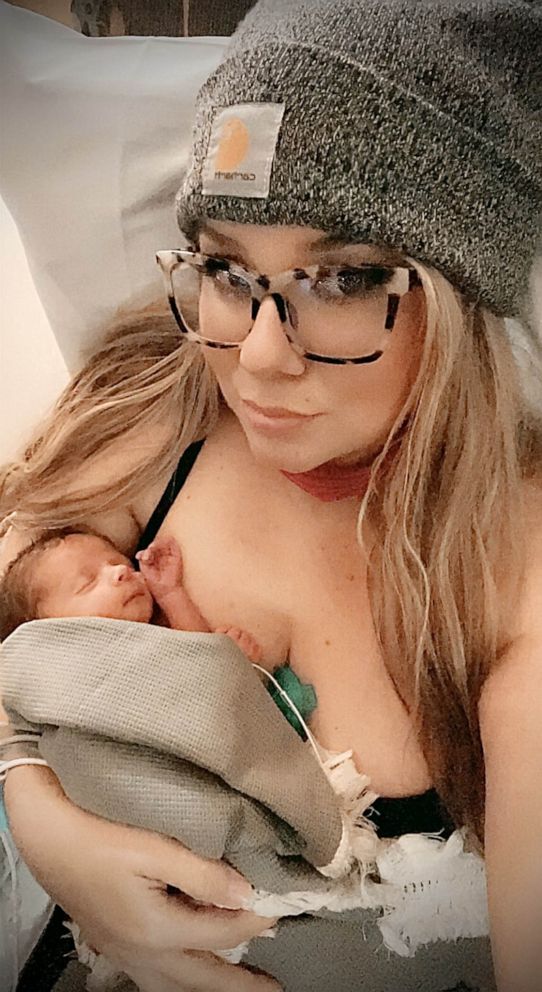 Courtesy of Kerissa Miller
Kerissa Miller, a mom of a baby boy who was born prematurely, started a Facebook group to help parents like her find baby formula and facilitate formula donations.

The Facebook group helps parents and caregivers like her in southeastern Washington ask for formula, share information on formula stock at local stores and facilitate formula donations for each other.

“Moms message us and call us crying. They're on their last can of formula so the need is extremely urgent,” Miller told “Good Morning America.” “When these moms go on Facebook looking for formula, they're at such a desperate state that delivery is really the only option to help that baby get fed right away.”

Miller and a team of several moderators as well as three delivery drivers, including Mac Jaehnert, set out every day to respond to Facebook posts from parents in need and coordinate formula pickups and drop-offs.

“We’ve fed hundreds of babies just by gifted formula to us. There's no other option,” Miller said. “Pediatricians can't supply the need. There's just no formula to go around so we're just depending on moms to donate formula to us to feed each other's babies. It's a crazy world we live in where Facebook feeds our babies.” 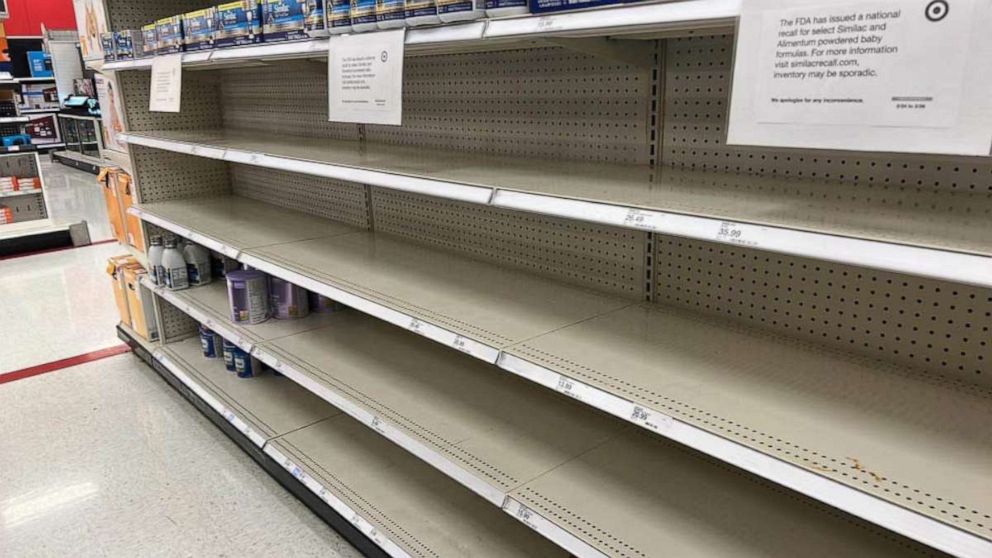 Courtesy of Kerissa Miller
Kerissa Miller took a photo of the empty formula shelves at her local Target store in Kennewick, Washington, on April 28.

In just nine days, the public Find My Formula, Tri Cities WA group has ballooned to over 560 members. Some days, Miller said she drives up to six hours with her son to make formula deliveries after she gets off her eight-hour night shift as an environmental wastewater operator simply to help.

“All we have right now is community so we're just doing everything that we can to help the babies because this has affected the wealthy, the middle class and the poor,” Miller, who is also currently four months pregnant, said.

“I've delivered formula to mansions and those moms can purchase it but they can't because it's just not available. And the moms that are suffering the hardest are the moms on WIC,” she added, referencing the federal benefits program for low-income Americans. “It's just a crisis that you never knew existed in America.”

“All I can do is just go pick up a can of formula and go drop it off before I go to bed.” 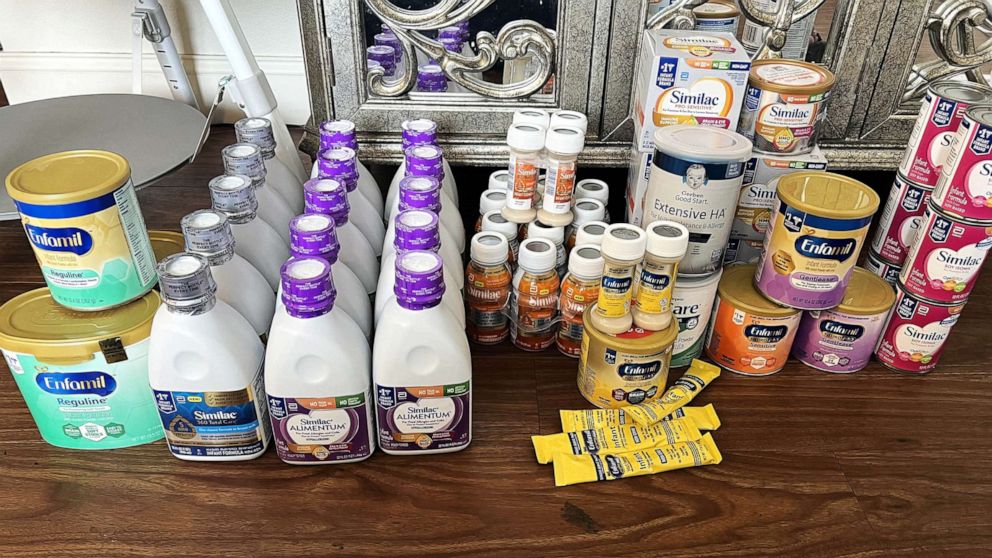 Courtesy of Kerissa Miller
Parents and caregivers have been asking others for baby formula online, coordinating formula donations, and driving for hours to deliver formula to those in need.

Marcela Young has also been dedicating her time to ease the formula crisis. Young is a mom to an 8-month-old and although her son doesn’t need baby formula, seeing stories of other families impacted by the shortage resonated with her.

“I don't formula feed personally, but I do know a lot of moms that do and just the feeling of not being able to help your child is just very close to home,” Young told “Good Morning America.” 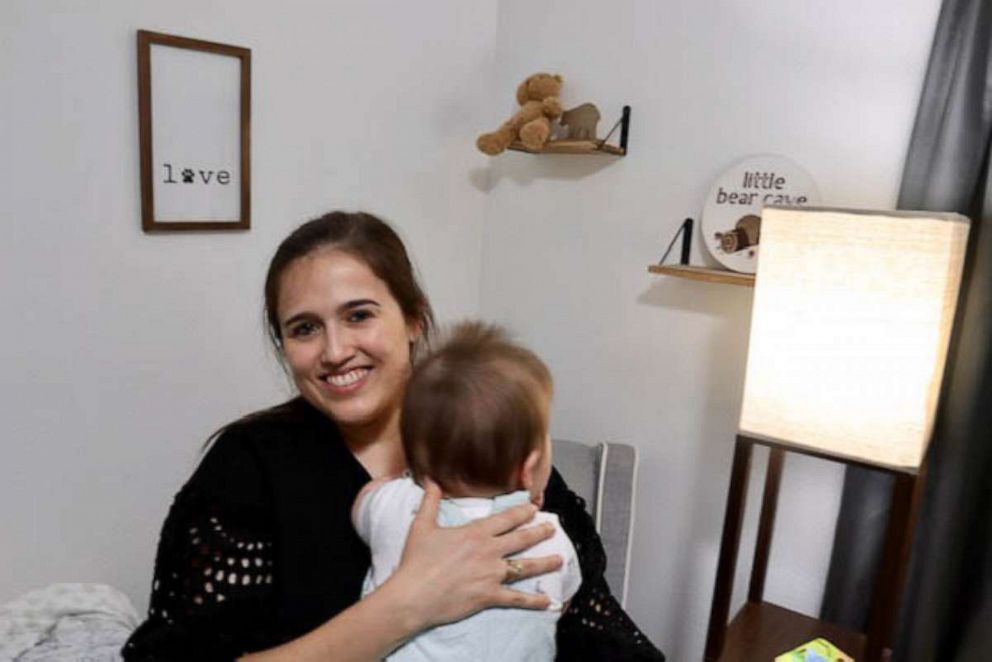 Young, a consultant in the Houston area, remembered that one of her former classmates had started a company that lets people create interactive maps online and quickly realized the map tool could be one way for her to help others.

That’s how the 29-year-old launched her “Fighting the Formula Shortage” map last week. The map, hosted by Proxi, is viewable on a computer, phone or tablet, and lets anyone add any point to a global map and organize it under several categories: “need formula,” “can donate formula,” “need breast milk,” “can donate breast milk,” “formula in-store” and “milk bank.” 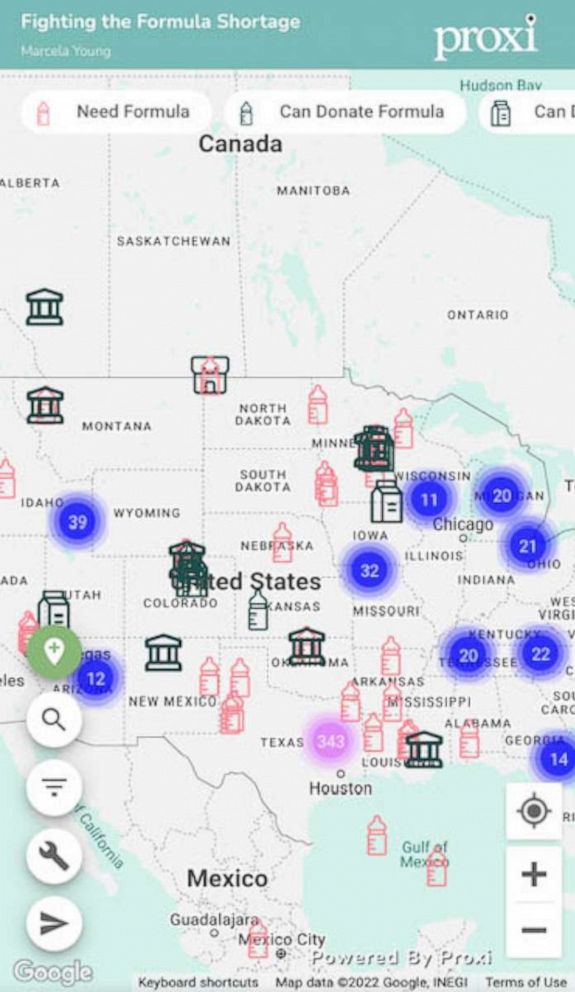 Courtesy Marcela Young
Young's "Fighting the Formula Shortage" map can be viewed and updated on a computer, tablet or mobile phone.

“The way the map works is you add a point anywhere in your country. You don't have to put your actual address,” Young explained, adding that anyone who adds a new point will also receive a welcome email afterward.

But Young also tries to help arrange connections whenever possible.

“People do reach out and say, ‘Hey, I have this pin that I'm looking at near my area. They need formula. I see formula at my store, I would like to ship it to them or I'd like to take it to their house or wherever to meet up,’” Young said. “Then I, as the admin of the map, can see their information if they decided not to share it, and then put them in contact with each other. I make sure that the person receiving it knows who's going to contact them and I try to make sure that the other one knows who needs it.”

Young has spread the word about her map through her friend network and on social media on the Fighting Formula Shortage Facebook and Instagram pages. As with many groups online, Young also warns others to stay vigilant about potential scammers.

“There's a lot of good in humanity still,” she added. “And it's been really nice to see people stepping up and willing to spread [the] word, spread resources.”