In any year, Thanksgiving can be both the best of times and the worst of times for families, but 2020 is bringing with it some even bigger potential landmines for conflict.

First, the holiday is taking place just weeks after a divisive election, the results of which some people are still protesting.

This Thanksgiving is also taking place amid the coronavirus pandemic, which has left families stressed emotionally, financially and physically.

With the Centers for Disease Control and Prevention, now advising Americans not to travel for Thanksgiving, the holiday is also creating new conflict between family members with different ideas about how to celebrate safely.

"There’s the old saying, you only hurt the ones you love," Sherrill W. Hayes, Ph.D., professor of conflict management at Kennesaw State University in Georgia, said. "Families feel that they can have these debates because they have a long history of knowing that even after the they’ve fought for a while they’re going to make up and everything is going to be okay."

The pandemic also means many families will be communicating on Thanksgiving this year via technology rather than in-person, another potential stressor. 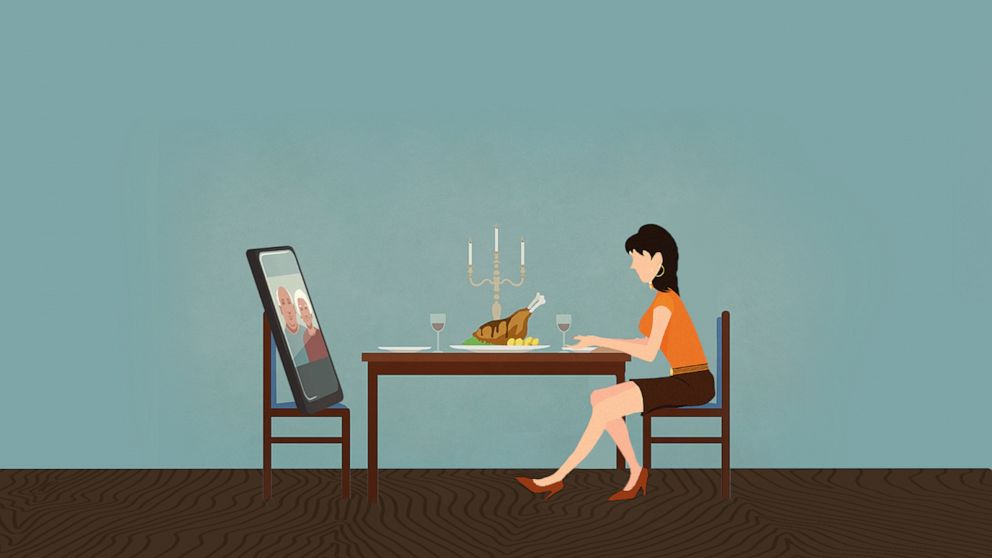 ABC News Photo Illustration, Getty Images
How to handle conflict with relatives amid the election and the pandemic

"The truth is conflict happens every year for families, and that can make holidays so stress-inducing because people know that potential is there," said Kory Floyd, Ph.D., an author and professor of interpersonal communication at the University of Arizona. "Add to that the stresses of the pandemic and the stresses of the national election, and it can be very tough."

Here are five tips from mental health and communications experts to help keep the peace in the family.

1. Make a decision and move on

Once you make the decision about what's best for your family for celebrating the holidays safely, communicate it clearly and move on, advises Nicole Beurkens, Ph.D., a holistic child psychologist and the founder and director of Horizons Developmental Resource Center in Caledonia, Michigan.

"Once you’ve communicated that, 'yes we’re coming,' or 'no, we’re not,' or 'this is how we feel about it,' it’s important to not continue to feel obligated to engage in discussions or arguments about it," she said. "Ultimately each of us as individuals and as a family unit needs to decide what is best for us and then just calmly and respectfully communicate that and try to let go of how other people are going to feel around that."

Beurkens recommends communicating your decision by framing it around doing what's best for yourself and your family versus what is right or wrong to do.

"If there’s people in the family who do want to get together for the regular gathering, they can do that and it’s not our role to be argumentative or judgmental about that," she said. "Everybody needs to decide what’s best for them and stick with that and say, ‘I’m doing what’s right for me and whatever other people do is totally fine.’"

2. Use 'I' statements when the conversation gets heated

Whether you are talking politics or the pandemic, the experts say to frame the conversation around what you believe, instead of what your friend or family member should think.

MORE: College students urged not to travel home for Thanksgiving amid COVID-19

"How we phrase things and how we present things is really half the battle," said Deborah Duley, the owner of Empowered Connections, LLC, a women-focused counseling center in Maryland. "Sometimes it’s not what you say but how you say it."

Using "I" statements, like "I believe," or "I hear what you're saying, but this is how I think," keeps your feelings to you and invites more of a conversation than a heated debate, according to Duley.

3. Decide to be the one to defuse arguments

Experts say to take these words of former first lady Michelle Obama to heart at the Thanksgiving table -- "When they go low, we go high."

Specifically, Floyd says to have a conversation with yourself ahead of time to make sure you are the one going high when the conversation goes low.

"When a conversation starts to get heated, what keeps it from devolving is that someone in the conversation has the resolve not to let that happen," he said. "All it takes is one person to derail that sort of downward spiral that can happen in conflict."

4. De-escalate with humor and deep breaths

Duley, who described her political beliefs as being very different from her family's, said she has learned to take a few seconds before replying to something hurtful or inflammatory said by a family member.

"It's just a deep breath or just reminding myself that I don’t need to go there if I don’t want to," she said.

Floyd said simply cracking a joke can ease the tension of a stressful conversation.

"Whenever my wife and I feel like we’re going down the road of conflict, we derail it with humor," he said."One of us will crack a joke, like, why are we even fighting about this? It reminds us that it’s not important enough to drive a wedge into our relationship."

5. Set ground rules ahead of time

Before you even sit down at the dinner table or log onto a family Zoom call, experts say you should already have set ground rules with your family.

The ground rules can focus on everything from what topics will and will not be discussed to how potentially tough conversations will be handled, according to Hayes.

"What are the things we can talk about, and if we want to talk about important things, what are the ground rules for those conversations," he said. "One ground rule could be, we’re not going to make personal attacks."

Especially when it comes to families, people also need to set ground rules about fully hearing people out, Hayes noted.

"My ground rule number one is always, are you listening or are you waiting to talk," he said. "In families, we know the other people sitting around the table, whether it’s a virtual table or a real table, we think we know them so well, we’re not listening, but just hearing what we think they’re going to say."

Hayes says to listen to people by asking why they think that way, and then look for what your views and life experiences have in common.

"It’s way easier to focus on differences and chaos and disorder, but focusing on those commonalities makes a huge difference in breaking things down," he said.