Amid a heated debate playing out in school districts across the country over whether students should be required to wear face masks, a Tennessee dad is going viral for an impassioned speech in which he explained why he is having his 5-year-old daughter wear a mask.

"She went to school and was one of just a few kids in her class wearing a mask, which made her ask why she had to. My answer was because we want to take care of other people," Justin Kanew, of College Grove, Tennessee, said during a school board meeting Monday night. "She's 5 years old but she understood that concept, and it's disappointing that more adults around here can't seem to grasp it."

Kanew, also the dad of a 2-year-old son, spoke before the Williamson County Board of Education, which last week, just before the start of school, approved a temporary mask requirement for elementary school students, staff and visitors until Sept. 21, according to the school district's website.

The school board's ruling prompted an outcry from groups who opposed the mask requirement. Videos shared on social media showed people wearing masks heckled and confronted as they left the special session where the board ruled on masks.

Kanew said he had not planned to speak at Monday's meeting, which he attended to cover for his website, TN Holler, but decided to do so when he saw so many people speaking out against masks in schools.

"It just seemed important for the school board to hear that there are other voices out there," Kanew told "Good Morning America." "I just hope people will really continue to make their voices heard, especially in counties like ours where we can sometimes be drowned out by the other side of this discussion."

Both the Centers for Disease Control and Prevention and the American Academy of Pediatrics , an organization of nearly 70,000 pediatricians, have called for schools to enforce universal masking mandates as the United States experiences a COVID-19 surge, including among children, brought on by the delta variant and low vaccination rates.

MORE: How an epidemiologist plans to send his kids back to school amid COVID-19 surge

Some governors in states like Florida and Texas have banned mask mandates and threatened to remove local school officials who break state rules and require masks for students. In Tennessee, Gov. Bill Lee this week signed an executive order requiring schools to allow parents to opt their children out of a school mask mandate.

Kanew said his daughter told him she is one of just a few students in her class to wear a mask, but will continue to wear one regardless.

"To her credit, she’s totally seemed to understand that concept of helping other people and we’ve reiterated that to her over and over again," he said. "We just tell her that we want to keep everybody safe and the more people that wear masks, the safer everybody can be and the sooner we can get back to not wearing masks."

"She fully understands that and I wish more people would stop making this political and start making it more about taking care of each other," Kanew added. "At the end of the day, we should be doing everything we possibly can to keep our kids in school and to get back to some sense of normal, and if masks are a path to that, that seems like a small price to pay."

Kanew said his speech before the school board was met with silence in-person, but that he has received thousands of supportive comments on social media and has also been thanked in-person by members of his local community.

"[A school board member] said at the meeting that she’d gotten over 1,000 emails about this issue and over 700 of them were in favor of a mask mandate, so she reminded the people in the room that they may be a majority in that room but and doesn’t necessarily reflect the reality of the greater situation," he said. "You can’t judge based on who shows up to kick and scream."

MORE: Delta variant in kids: What parents should know

In his speech, Kanew also provided a counterpoint to parents claiming on behalf of their kids a religious exemption from wearing a mask.

"I asked a pastor friend of mine and he was very clear that there was no actual biblical justification for using the Bible to get out of a mask mandate passed by a majority of this elected board," he said. "But thousands are doing it anyway, calling it a religious exemption, which is frankly just sad. Avoiding masks is not in the Bible, but taking care of others is. 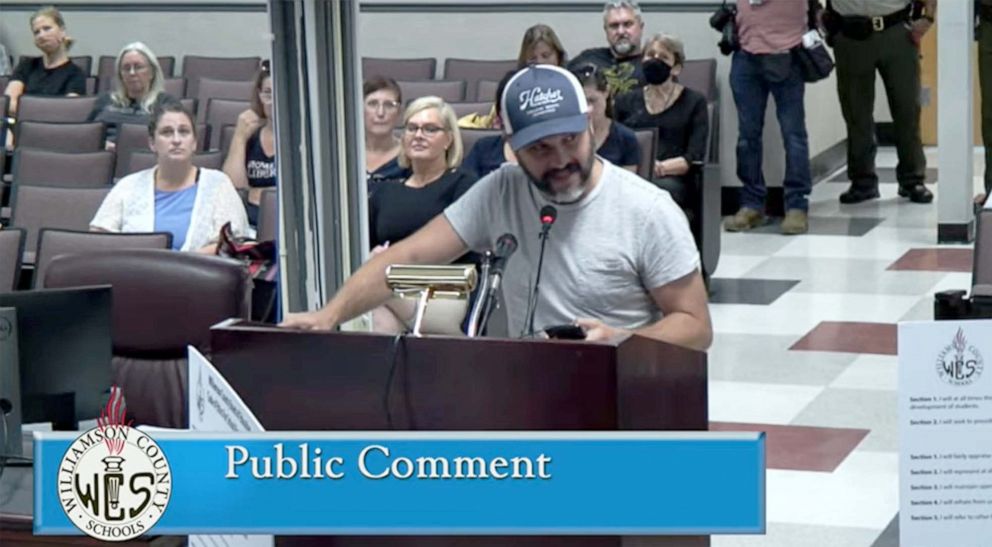 Kanew told "GMA" that although he had not planned on speaking out publicly amid the mask debate, he is glad he did and hopes his example encourages others to do the same.

"I think it’s important to put a face on some of these disagreements whenever possible and actually see the humanity in each other," he said. "It’s easy to hide behind our social media screens and keyboard and I think it’s good to get out and talk with each other. It doesn’t mean you’re going to agree with everybody, but at least you can be reminded that we’re all trying to do what we think is right."