By Nicole Pelletiere
Video by Naomi Shah
Share —
Sign up for our newsletters to get GMA delivered to your inbox every morning!

A mother of two has come up with a unique solution for when her kids are squabbling over the same toy.

"In my clinical practice, I've used preference assessments to identify toys and objects that would motivate kids to learn," Fairly told "Good Morning America." "I took that idea and adapted it to the toy draft with my own kids."

When Fairly's children, Logan, 6, and Boden, 4, would disagree on toy-sharing, she'd lay out several items for a toy draft -- aka a preference assessment -- to identify what kids like and rank them in order of desire.

Fairly places the bin of toys in the middle and each child picks one toy. Flip a coin on who goes first and everyone gets three turns each.

"They may not love their choice, but they do have a choice," Fairly said. "There is power and control in having a choice."

On March 19, Fairly posted an Instagram video of her kids engaging in a toy draft. She offered them different types of superhero capes, masks, dolls and toy vehicles.

Instead of arguing, they enjoyed doing it.

Farily offered more unique tips for parents when kids are arguing over toys.

Narrate instead of intervening

Be the sportscaster instead of the referee. Instead of taking sides, describe what's happening.

Fairly suggests saying, "You took the toy, and now your sister is crying." This way, you're not taking sides. They then have the opportunity to work it out themselves. If they can't, then decide how you'll get a little more involved. 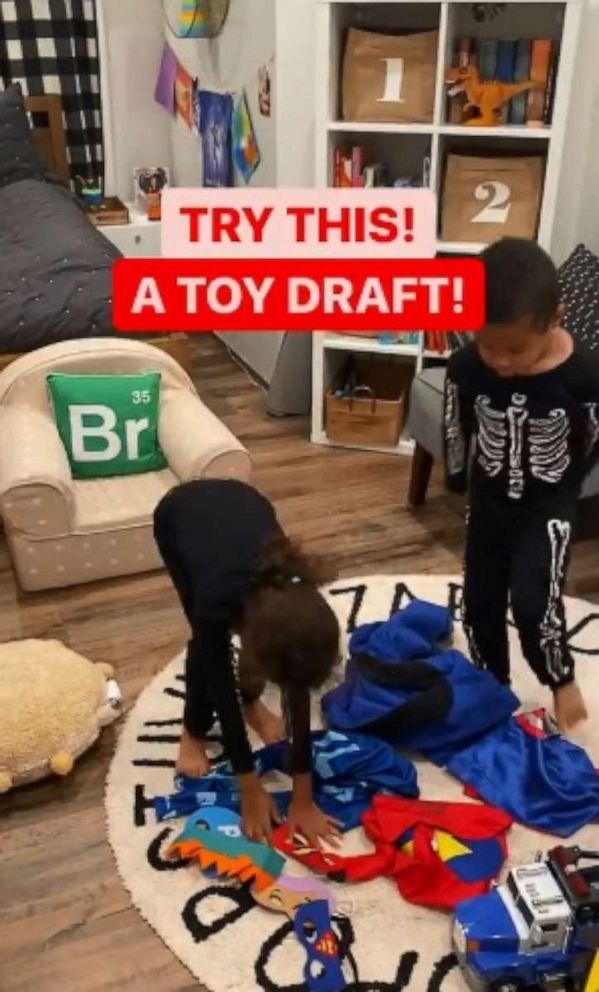 Don't put the toys away

Teach some alternative methods, like the toy draft. If the toys get put away and the kids hear, "Now, no one gets to play," then they aren't learning.

Set up a 'crash zone'

If one child is building or creating, parents will often see a sibling or another playmate wreck the scene.

Set up a "crash zone" or other area with the same building toys. That area is for crashing, separate from the area that's reserved for building.

Call attention to when they take turns, when they swap or share toys. Say things like, "I love the way you're playing."

"What you pay attention to is what you're going to keep seeing," Fairly explained.

Fairly said it varies for kids, though sharing is a practice that's not likely learned until age 3 or older. An alternative to sharing is taking turns for kids between ages 2 and 3.

"The more practice, the more they'll learn," Fairly said. "Sharing to them means, 'You want me to give up this thing I love, to this other person.'"

Try using a timer to introduce the idea of taking turns with one toy.

What works for some may not work for all

What works for siblings might not work with their cousin or peer. Once kids learn strategies like toy drafts, they'll start attempting them on their own and introduce them to each other.