Whether you live across the country or simply can't snag a reservation for a coveted table at Carbone, you can now recreate the taste of the iconic New York City Italian restaurant's pasta sauce from the comfort of home, no reservation required.

"I think the hardest part was dealing with two award-winning chefs and getting people to agree on taste," Skae said with a laugh. "Really, really nailing that Carbone taste took an extraordinary amount of time. Just to get marinara right might've taken six or seven months."

The team of chefs who oversaw the entire production process are exact and really specific about what they wanted and to make sure what they put in the jar was the best that it could be," Skae added.

At launch, the 24-ounce jars of sauces are available in three varieties: marinara, arrabbiata, and tomato basil, for $8.99 a jar. "We'll get a fourth [flavor] pretty quickly, roasted garlic will be our next one," Skae said. 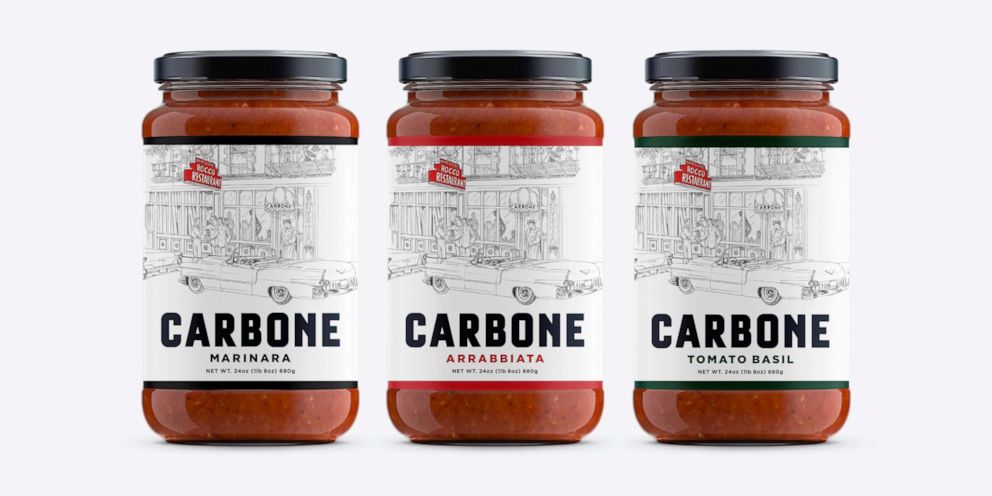 The recipe is made with all fresh ingredients and takes nearly one hour to produce, Skae said.

"We're opening up a number 10 can of tomatoes like we do in the restaurant. Each can has between 29 and 31 tomatoes in it that's picked at it's ripest in southern Italy," Skae said. "We use fresh basil, fresh onions, fresh garlic -- they're being chopped right there, so everything's the highest quality ingredients we can. The goal was to give consumers something that they can recreate, a Carbone-type recipe in their own home and that's what we've been able to accomplish."

"To ensure every jar of Carbone Sauce delivers restaurant-quality taste, we make it in small batches and craft our sauce with only fresh ingredients and use only the finest Italian tomatoes," Torrisi told "GMA" in a statement.

"We've replicated the same quality and flavors people expect from our restaurants, by giving them the same time and care that’s applied in a Carbone kitchen," Carbone said.

The jump from turning an iconic restaurant brand into a consumer product simplified Skae's job because as he explained, "the Carbone brand was already built -- It's remarkable because of the amount of time that saved me with brand development."

"Mario, Jeff and Rich had the vision to use the menu for the label," he said of the adapted illustrated sketch of the exterior of 181 Thompson Street that adorns the restaurant's menu. "Really it jumps off the shelf and looks different than anything else."

Skae first came on as CEO for the Carbone team in November to help shape the long-term strategy, equipped with years as a CPG executive and proven track record in the premium sauce category with another legendary New York Italian spot turned CPG brand -- Rao's Specialty Foods Group.

As they continue to build the brand, Skae said they decided to "stay very disciplined" and sell strictly on the East Coast and online. "I won't go West until I can go to those retailers and say, 'hey here's what we've done out here and this is why you should have us."

Skae said the brand's spicy vodka sauce beloved by celebrities and Carbone loyalists "is in development," but that it may take up to a year before the chefs are ready to put it in a jar and onto shelves.