By Katie Kindelan, Angus Hines
Share —
Sign up for our newsletters to get GMA delivered to your inbox every morning!

When Duchess Meghan celebrated her 38th birthday last week, she did so with a birthday cake that carried very special meaning.

The Duchess of Sussex celebrated at home at Frogmore Cottage with a sweet creation by Luminary Bakery, sources told ABC News.

The bakery in northeast London is dedicated to empowering women, a cause championed by Meghan as well. The duchess featured Luminary Bakery in the "Forces of Change" September issue of British Vogue she guest-edited.

She was impressed at how the bakery, which describes itself as a social enterprise, teaches women who are homeless, have been in the prison system, are victims of domestic violence, or in the sex trade, how to bake — and find employment.

Since being featured in the magazine’s September issue, Luminary Bakery has been inundated with royal fans eager to find out more about their work, and check out their pastries, according to Alice Williams, the bakery's founder and CEO.

"To have someone like the Duchess acknowledge us and champion us is incredible," Williams told "Good Morning America." "I think it will open a lot of doors for us."

"There's so many more women that need opportunities," she said.

👋 new faces around here: Luminary is a social enterprise working to empower the UK's most disadvantaged women. We recently compiled an impact report looking at our grads measures of independence- learn more about how Luminary works- https://t.co/g8Q78cWlTo pic.twitter.com/DQyQphi0KZ

Williams founded the bakery in 2014. Since then it has helped more than 60 women build their careers and gain independence, according to the bakery's 2019 Impact Report.

Women who are referred to Luminary Bakery start in a six-month training program where they learn how to bake while also gaining life skills. The program is also designed to help the women build a network and develop trusting relationships.

Once they complete the training, the women can apply to work at Luminary Bakery or at one of the bakery’s partner organizations.

The bakery then supports the women over the next two years with mentoring, group workshops and community help as they progress into independence and long-term employment.

(MORE: All the details of Duchess Meghan's capsule clothing collection for charity)

To date, 10 women who completed the training program with Luminary Bakery have gone on to start their own businesses, according to the bakery.

Last night we graduated our 10th Cohort of incredible trainees!! They each have made such amazing progress to achieve their goals and we absolutely love honouring and celebrating each of them.

"[Luminary Bakery] is designed to support the U.K.'s most disadvantaged women to reach their potential," Williams said.

Williams found out the bakery would be featured in British Vogue just days before the September issue was published.

Duchess Meghan sent Williams and her team a handwritten note along with a black leather Smythson notebook with "Forces For Change" embossed on the cover.

In the note, Meghan said including the bakery in the September issue was "non-negotiable" and commended the team "for what you represent to the community."

"...The work you do, what you represent to the community, the spirit of the women there- you all embody what it means to be "forces for change". Thank you for being a part of this special project." — HRH The Duchess of Sussex @BritishVogue #duchessofsussex #meganmarkle pic.twitter.com/XApGthXcom

"It was really special to hear directly from her about that," said Williams, who described the gesture as a "real surprise." "It was a real honor to be included."

When it came to Meghan's birthday, her first as a mom to son Archie, Luminary Bakery delivered with an artfully decorated carrot cake with "Happy Birthday Meghan" written on top. 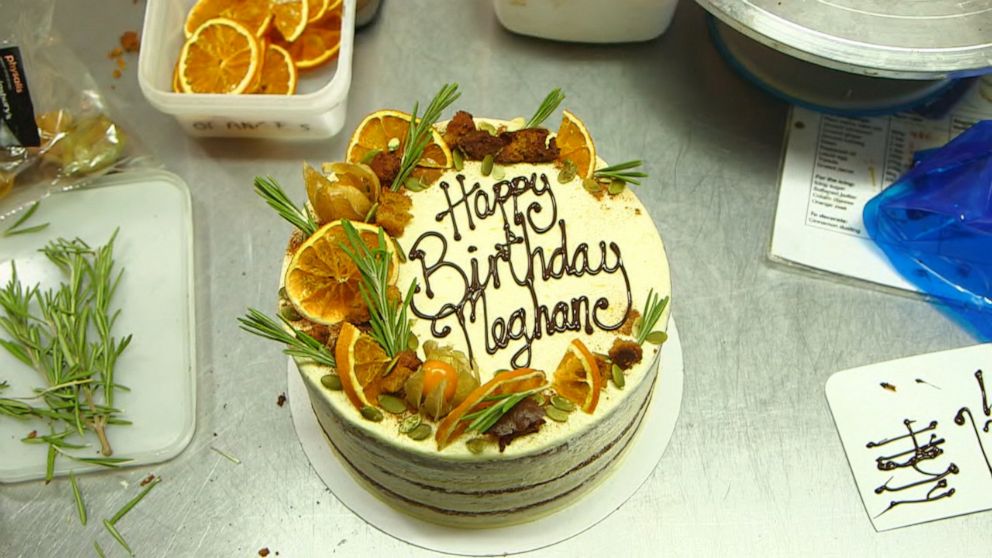 "When I applied for this job I did not expect that I'd be making a cake for Duchess Meghan Markle," Caoimhe Bennett, a baker at Luminary, told "GMA." "That was pretty crazy and being in Vogue, that's amazing."