Hunger and food insecurity should not stand in the way of Americans who want to exercise their right to vote.

This year, more groups, companies and initiatives have created campaigns to ensure that voters who show up to polling places on Nov. 3 for the 2020 election can do so without fear of going home hungry, missing a meal or being unable to provide food for their families.

Went to early vote today. This is the sign at the voting site. pic.twitter.com/QETothXiiq

From pizza deliveries and food trucks to healthy, gourmet-prepared and catered meals, organizations such as Feed the Polls and Pizza to the Polls are raising money and awareness in order to feed food-insecure voters for free. 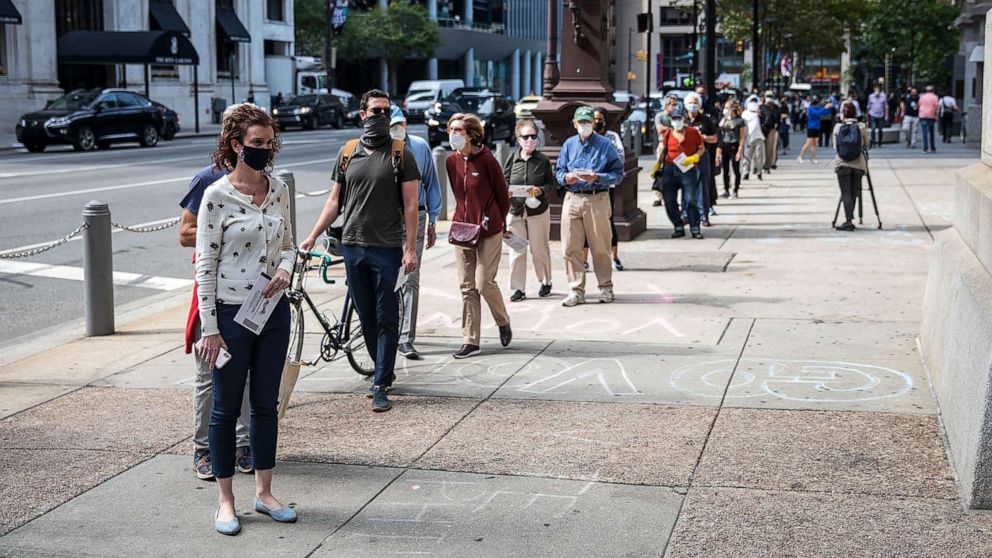 Gabriella Audi/AFP via Getty Images
People wait in line to cast their vote during early voting at City Hall in Philadelphia on Oct. 7, 2020.

Hunger disparities have been heightened due to the ongoing coronavirus pandemic, with one in six Americans -- nearly 54 million people -- predicted to experience food insecurity, according to Feeding America.

The Migrant Kitchen teamed up with Zagat and The Infatuation to devise a plan using grassroots partners, caterers and food trucks to help sustain voters waiting in what are expected to be historic long lines on Election Day.

The team wanted to focus on communities where voter suppression and voter intimidation issues are present, and plan to distribute at least 50,000 hot meals depending on funds to those disproportionately impacted districts across the country. 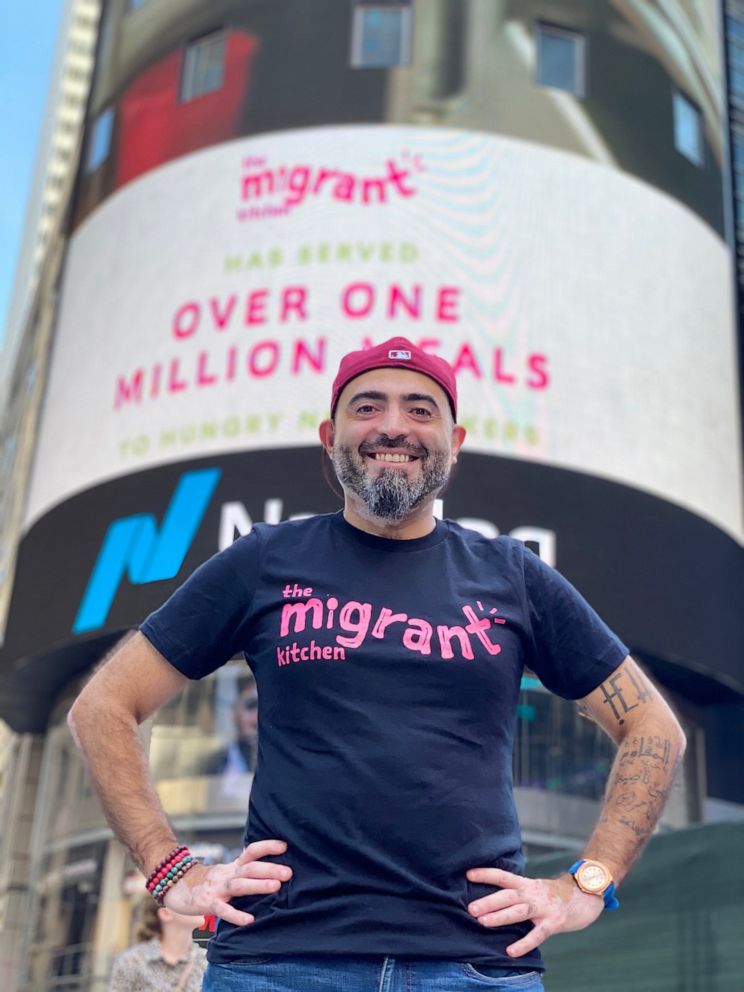 Nasser Jaber, the co-founder of The Migrant Kitchen -- a social good food company that was one of the first to feed front-line workers during the height of the coronavirus pandemic -- told "Good Morning America" that hunger doesn't discriminate.

"We believe that hunger is universal regardless of skin color or politics," he said. "However, in certain areas, there are going to be long waiting lines and people aren't going to be able to practice the right to vote," which he explained could mean those who do wait "can't even cook for their families or don't have the money to buy food because of the economic crisis."

Voter access is a bigger issue than ever in 2020. So is food insecurity, which an estimated 1 in 6 Americans will face this year. @infatuation and @zagat, along w/ @themigrantkitchen, are launching Feed The Polls - goal is to offer 50k free meals on Nov 3 https://t.co/nvO5DVzh5z

"Our job is to make this as easy as possible and that's by providing meals, things that can make the long wait bearable," Jaber said. "We care about feeding people with dignity."

Jaber explained that The Migrant Kitchen has the purchasing power to buy high-end products at a fair price and deliver at scale. 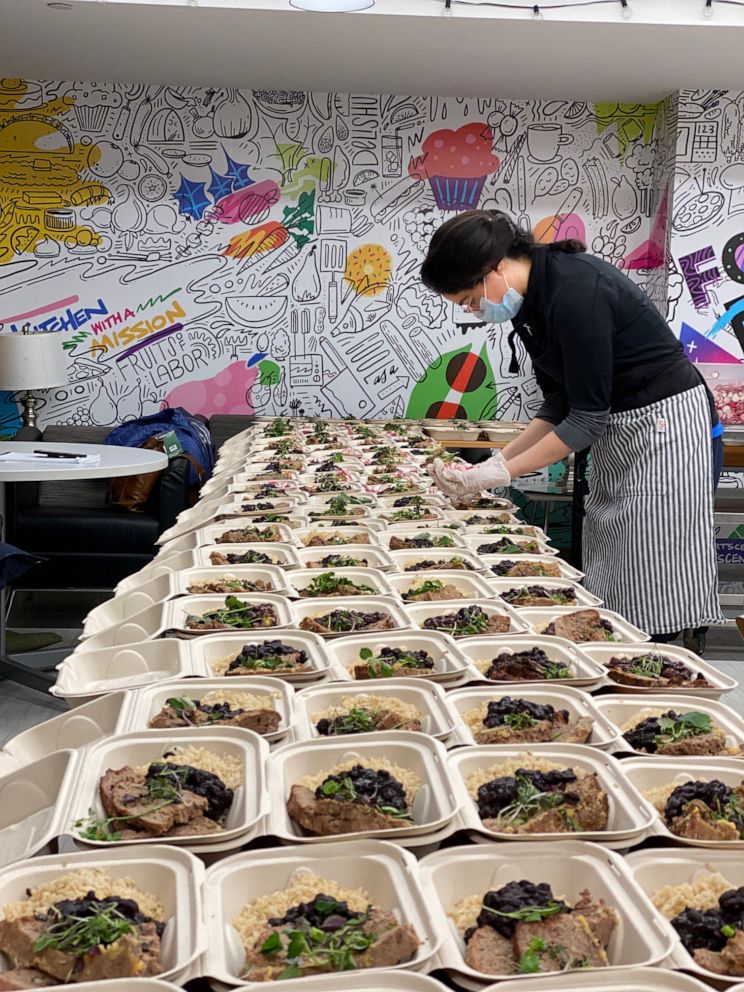 "We do a lot of gastro diplomacy in general and how to empower," he said of their culinary approach. "We look at the areas that we are going to and we try to provide food based on the demographics of that neighborhood."

In order to logistically create a cost-effective model that pumps money back into the local communities, Jaber said they want to bring in food trucks that are "usually owned by women, minorities and veterans, and were really hit hard by COVID."

The Migrant Kitchen staff, led by Chef Lisselly Brito, will then vet and contract those local food businesses to scale up meals of anywhere from 2,000 to 15,000 plates depending on need and funds, and train them via Zoom from their New York City-based kitchens.

Feed the Polls is currently in touch with multiple nonpartisan, grassroots organizations and asks "them the demographics near the polls, how we get that data" in order to hammer out operations logistics to make their plans in that area. Each meal will likely cost around $10 to make, which is why donations and awareness are their top priority.

Zagat and The Infatuation CEO Chris Stang said they launched the project to help communities solve issues that would otherwise prevent citizens from voting.

"As food is something we know well, and in partnership with The Migrant Kitchen, we’re ensuring that food insecurity doesn’t stand in the way of anyone exercising that right," he told "Good Morning America." "We’ve seen a tremendous outpouring of support from our community donating whatever they can to help the cause. Every $10 helps us closer to our goal of serving 50,000 meals on election day."

They will also need volunteers in each area to help fundraise, distribute meals, work in kitchens and spread the word.

"As someone who became nationalized post-9/11 -- I'm an immigrant and I come from Palestine -- for a long time I wasn’t able to vote," he said. "Millions of people like me -- forget race, culture or which part of the aisle you're on -- just people who don't have the income or job flexibility to do so, when you don't get the right to vote, then nothing really changes."

"Coronavirus exposed the haves and the have nots," he continued. "The truth of the matter is people who were marginalized regardless of politics can't feed their families. Our goal right now is to make sure people use their right to vote."

Pizza to the Polls has another approach to tackle voter hunger in long lines this Election Day.

To keep people fed this Election Day, @UberEats is teaming up with @pizzatothepolls to deploy a fleet of food trucks to deliver free, tasty treats to polling places. Don’t let hunger stop you from voting.

The innovative food truck program was created in response to record voting interest and poll worker shortages amid the pandemic. The fleet of more than 185 food trucks will be deployed to 25 cities across the country to deliver free snacks to Americans in need at polling places with long lines.

My mom & I early #voted today, not realizing it would take 3hrs! But we did it so that our voices could be heard. We did it for our ancestors that in the past, couldn't. We did it for #democracy. Thanks @PizzaToThePolls and @PapaRaysPizza for coming to the rescue! ✊🏽🍕🙆🏽‍♀️ pic.twitter.com/eylfpjLzaM

The nonpartisan, nonprofit campaign is working in partnership with Uber Eats as well as popular food-service brands such as Milk Bar, Shake Shack, Voodoo Doughnut and more.

“We’re already seeing a record number of people voting in places like Virginia,” Pizza to the Polls co-founder Scott Duncombe said in a statement. “Hunger is the last thing that should hurt our elections. Our mission is to create the same enthusiasm that brought everyone to the polling site in the first place.”

Charlie Balsam, director of operations for The Migrant Kitchen, reiterated that at the end of the day, "no one should have to choose between filling out a ballot and filling their stomach," he told "Good Morning America."

"There are already so many obstacles surrounding the voting process this year, we will do everything we can to make sure food insecurity is not one of them."