Award-winning restaurateur Michael Scelfo has run kitchens post-9/11 and through the 2008 economic downturn, but he said the COVID-19 pandemic and soaring inflation have brought on prolonged issues businesses are still trying to figure out.

"What's so different this time around is it's this sustained, evolving-downward spiral since March of 2020 when things hit the fan with COVID and the shutdown," Scelfo told "Good Morning America." "What we're left with is the economic rubble of the aftermath." 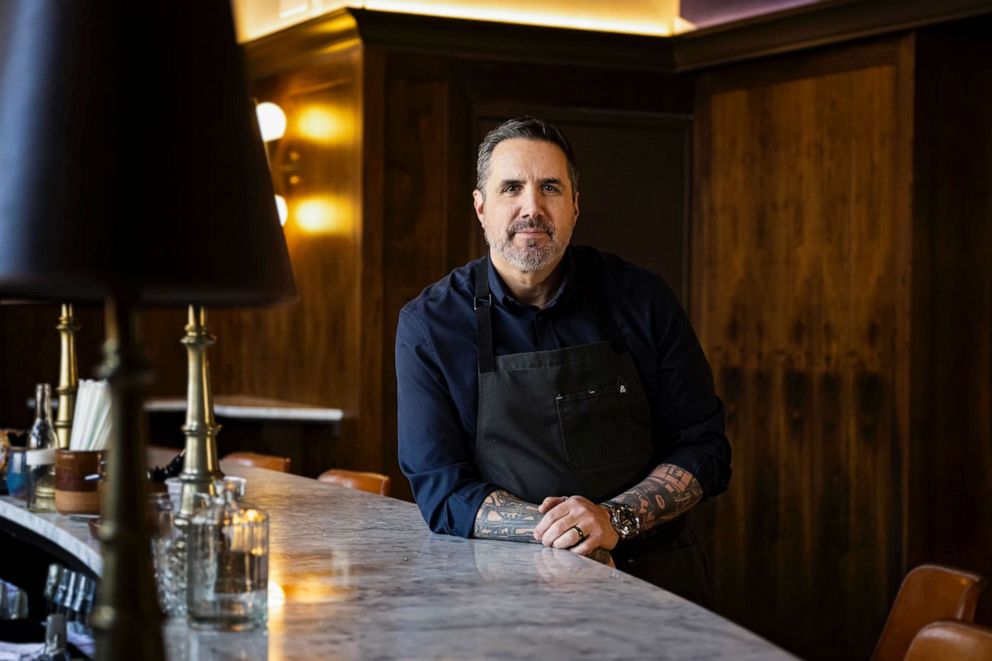 Restaurant owners are accustomed to dynamic changes, but even industry veterans like Scelfo said, "it feels like we're continually taking punches and not necessarily getting the relief that we expected."

And problems that began at the onset of the pandemic -- mandated restaurant closures, safety restrictions, staffing shortages and broken supply chains -- have been exacerbated by rising costs on food, fuel and materials, failed federal relief packages and inflation, experts said.

Food prices have outpaced the overall inflation rate, which is up nearly 11% year-over-year in July, according to the latest data from Bureau of Labor Statistics. Common restaurant staple ingredients like flour -- when purchased in a U.S. city -- rose 22% in the last year, while eggs have increased 38%. 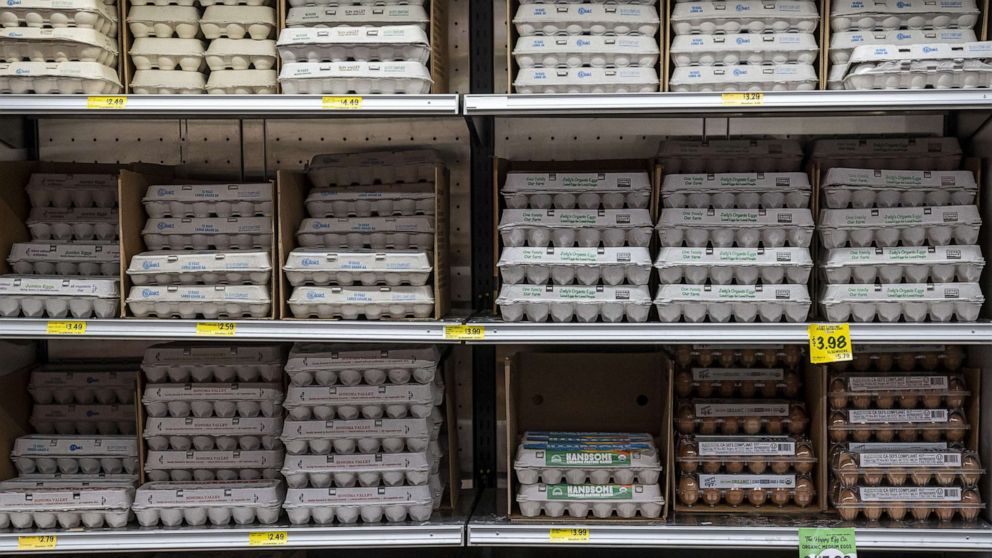 David Paul Morris/Bloomberg via Getty Images, FILE
Cartons of eggs for sale at a grocery store in San Francisco, Calif., on Nov. 11, 2021.

I don't want to raise prices on the consumer any more than I have to because I'm sensitive to it too...

"It all trickles down to what the baseline cost of whatever the product is," Scelfo said. "If you're paying more for it on the home front, you can be assured that we're paying more."

Scelfo, who has not passed along increases to his guests, looks at that as a last resort.

"I don't want to raise prices on the consumer any more than I have to because I'm sensitive to it too. And I do think there's a limit to what you can realistically charge," he said. "If you're a restaurant that's operating on thin margins, you're really probably up against it right now -- there's kind of this feast or famine out there for restaurants who have the means to navigate this period."

"Inflation is having a tremendous impact on everyone across the board," Leslie Silverglide, co-founder of California casual restaurant chains Split and Mixt, told "GMA." "[We've tried to] hold price as much as possible," she added, and "be smarter about how we run our business."

Brooklyn-based chef-owner Sal Lamboglia of the newly opened Italian hotspot, Cafe Spaghetti, thinks customers may relate more than ever to the challenges of rising food costs as they shift their own spending on groceries. 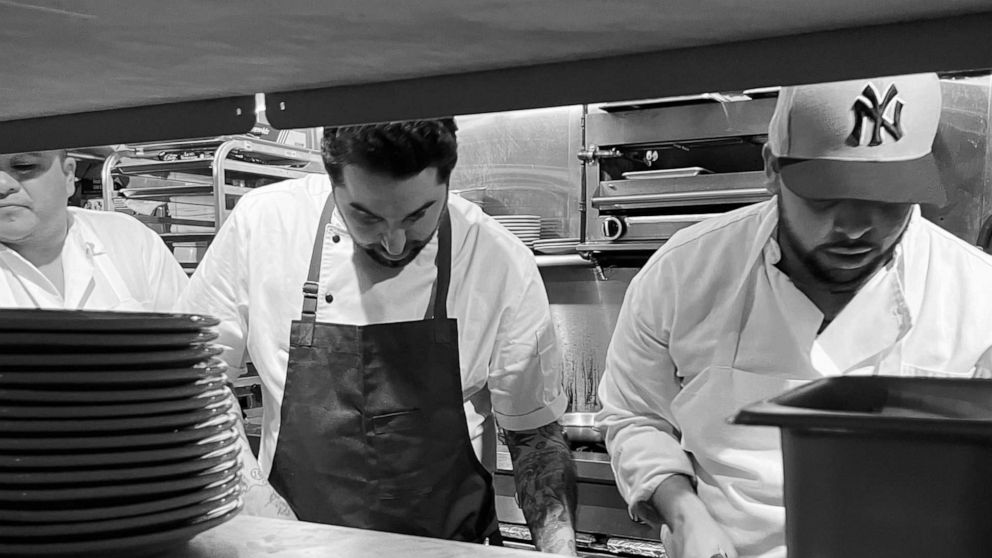 "So many things that we use that aren't even specialty items -- eggs, milk, cream, butter – have gone up 10, 20 30% -- I'm sure every restaurant is going through this, but I also feel also for the diner," he said. "It's scary because I don't know if things will make their way down again."

And he said Lamboglia's menu has taken a hit.

"We've been getting shorted on certain pastas, and certain grains and flour -- I've had to actually change a brand of pasta," he said. "[We] go back to the drawing board each time and say, 'OK, how valuable is this dish with this exact pasta? Can we change the shape? Are people going to like it? And that's what we deal with now. It's a lot."

Chef David Nayfeld, owner of Che Fico and Independent Restaurant Coalition (IRC) board member, told "GMA" that some think inflation is "just now happening." "Our costs have been rising steadily and aggressively for nearly two years," he said.

"We've decided to actually lean into quality," Nayfeld said. "It may mean that people will dine out less," but he believes diners will choose restaurants "based on quality." 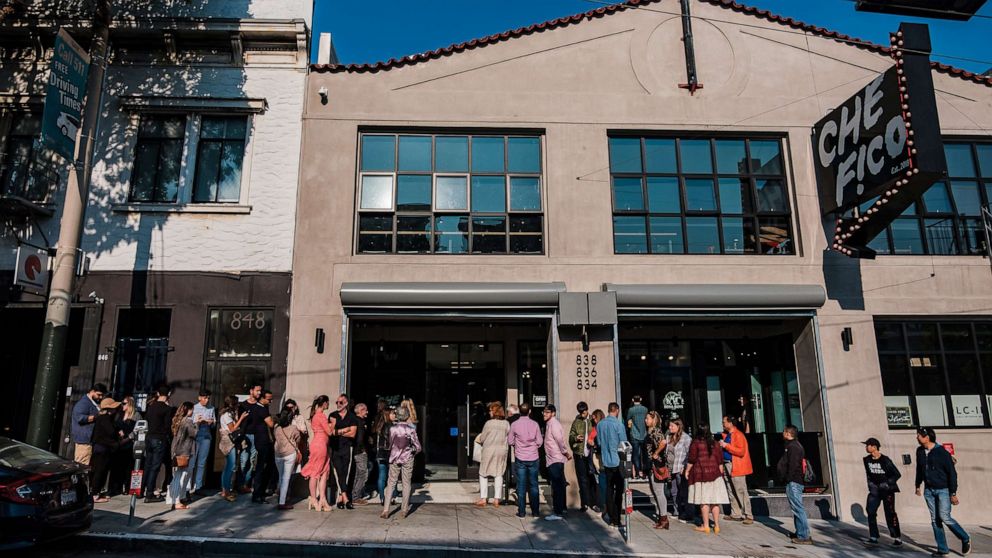 The Washington Post via Getty Images
People are lined up outside the Italian-themed Che Fico in San Francisco, Aug. 11, 2018.

He also hopes the decision to spend more on employees, products and farms will ensure the support of key players who share his values to "offer a better quality of product to our guests, knowing that they're smart enough to know the difference."

"Our labor costs per head were up 30%," he told "GMA" of the overhead and "first punch" at the start of the pandemic. "And that's pretty tough in a business where labor costs are already massive." 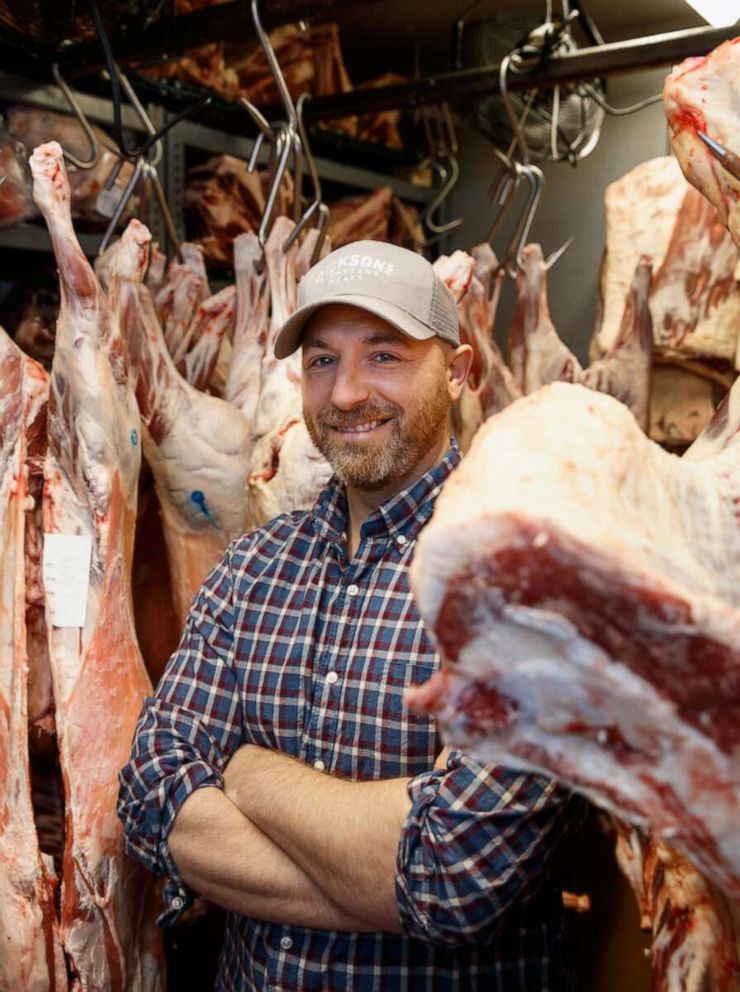 Our farmers' costs are now going through the roof

Where Dickson was initially "insulated from food cost increases" and able to keep meat prices steady thanks to longstanding relationships with purveyors, he said "unfortunately, those things don't hold right now."

"Our farmers' costs are now going through the roof," he said, noting fertilizer and fuel costs have prompted higher prices.

"They don't want to increase prices on us because they don't want me to buy less and they know that if I raise my prices, we'll probably sell less," Dickson said.

Four months ago, he made a "very purposeful decision to add a beer and wine license," opening a bar that serves as "a high margin business" to offset other new costs. 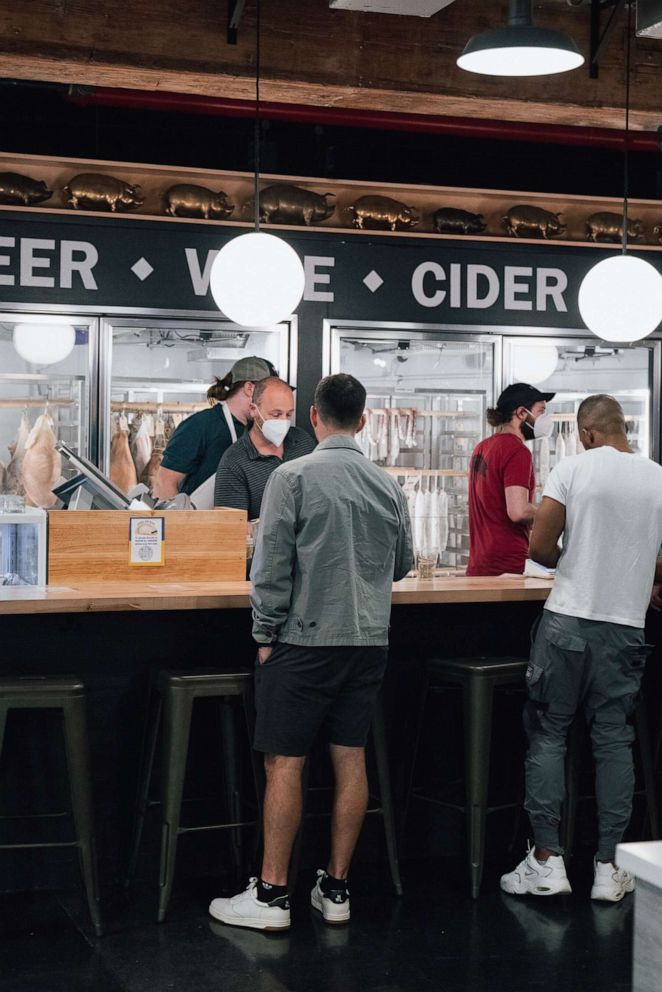 "We've kept either small increases or no increases in many places because the bar's margins are so much higher," he said, hailing it "a bulwark."

He also strategized his labor costs.

"Now they're pretty much flat because we made a choice to pay our employees really well then and we haven't had to keep giving raises -- we're very competitive -- now we're just kind of figuring out all the other pieces."

In 17 years of opening restaurants across California, Texas and Arizona, Silverglide said her growing list of challenges has been unlike any other.

it's like Whac-A-Mole ... we solve one thing, then something else pops up

"We joke that it's like Whac-A-Mole. We solve one thing, then something else pops up," she said. "Especially as we're looking to build out new restaurants, we're finding it really hard to just get standard equipment -- we place the orders and then as we get closer, they're like, 'Oh, actually, it's gonna be another four to six months.'"

"It's a hard place to be running a restaurant today," Silverglide told "GMA."

Lamboglia thinks restaurants can strike a balance by offsetting expensive entree lists with a section of the menu that's affordable.

"At least giving the guests the option not to feel like, 'Wow, I almost can't even go out to eat because it's just too much," he said.

Rather than constantly revising menu prices as inflation rose to 7% this spring, Leslie Whitney, the owner of Sunset Grill in Virginia, told "GMA" she and her husband decided on a "temporary fix" to add an "inflation fee" of 3.5% to diners' checks.

"As food prices were literally rising and changing every day ... we had to do something to recoup some of the money loss," she said. Although the flat fee won't cover all their new costs, they are "simply trying to stop the bleed."

Staffing has been one of the "lasting effects of COVID" that Whitney has grappled with.

"We can fluctuate with rising food prices, but not having appropriate staff really puts a wrench in our operations of service -- we're constantly trying to hire where we are short staffed," she said. "Back-of-the house positions are the hardest to hire because we have high expectations and aren't willing to cut corners in knowledge and experience."

A push for federal funding

"The one big player here that has not done enough is the government," Nayfeld said. "[The government] has had the ability with multiple bills to refill the Restaurant Revitalization Fund, which would really do a tremendous amount – not just for now, but for a couple of years, making sure that these restaurants can stabilize." 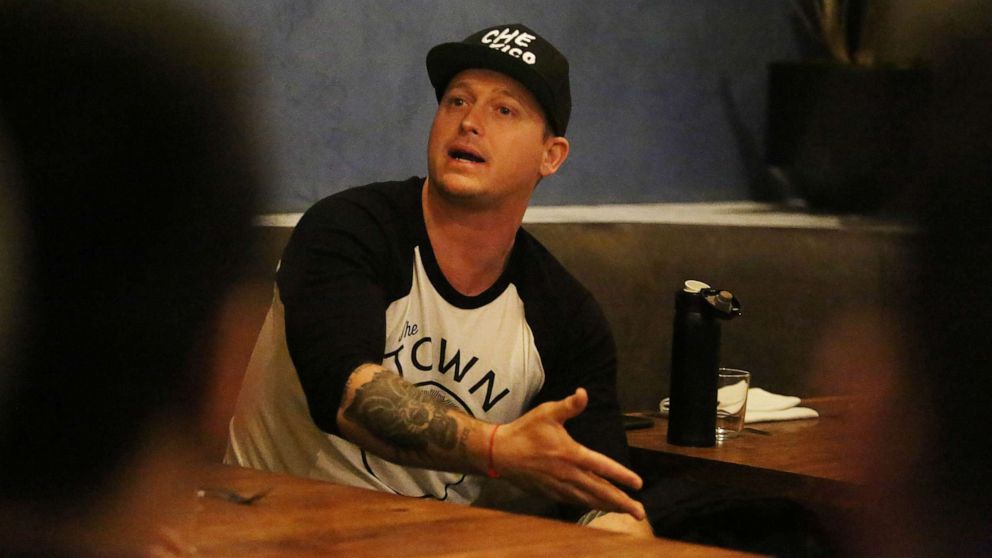 San Francisco Chronicle via Getty Images
David Nayfeld, chef owner Che Fico, speaks during a meeting of a handful of notable San Francisco chef and restaurant owners and others who gathered and met at Mourad to discuss the state of the restaurant industry, March 16, 2020, in San Francisco.

Scelfo, who applied and said he never received money from the bill that was part of the American Rescue Plan, added that the "RRF only funded maybe a third or half of restaurants that applied for it and they've still never replenished that."

Despite the constant battering, resilience has created a resounding sense of gratitude and respect in the industry.

"To look for a positive in all this, I've never been more proud of our teams," Scelfo said of the staff who continuously rises to the occasion.

"Restaurants are continuing to find a way to provide a great customer experience so that they really try to minimize the effect of what's happening out there and make you feel like you're escaping it … that's why I'm trying not to pass along that cost."

"None of that would be possible without a lot of dedicated people that continue to work in this industry and work harder than they ever had before," Scelfo said.