By Kaila Nichols
Share —
Sign up for our newsletters to get GMA delivered to your inbox every morning!

In what has become a family tradition, Keith Mitchell, 64, decorates his house in Suffolk, Virginia, with millions of lights each year. In 2020, Mitchell told "Good Morning America" that he put up 1.2 million lights and increased it to 1.5 million for the 2021 holiday season.

Mitchell always put up lights, he said, but the large displays all started at the request of his granddaughter, Samaria Johnson, 6, who asked for 100 lights one year. Mitchell’s response was to give her even more.

“It’s all about my granddaughter for me," he told "GMA," adding that she absolutely adored the display last year. "Plus, it makes a lot of people happy."

Keith Mitchell
Mitchell, along with friends and family, also created a pathway specifically for people to walk through to view the light decorations.

The display brings locals and visitors from other states, including North Carolina and Missouri, he said.

"Last year I had anywhere from 200-500 people a night. Every single night. It was crazy last year," he said. 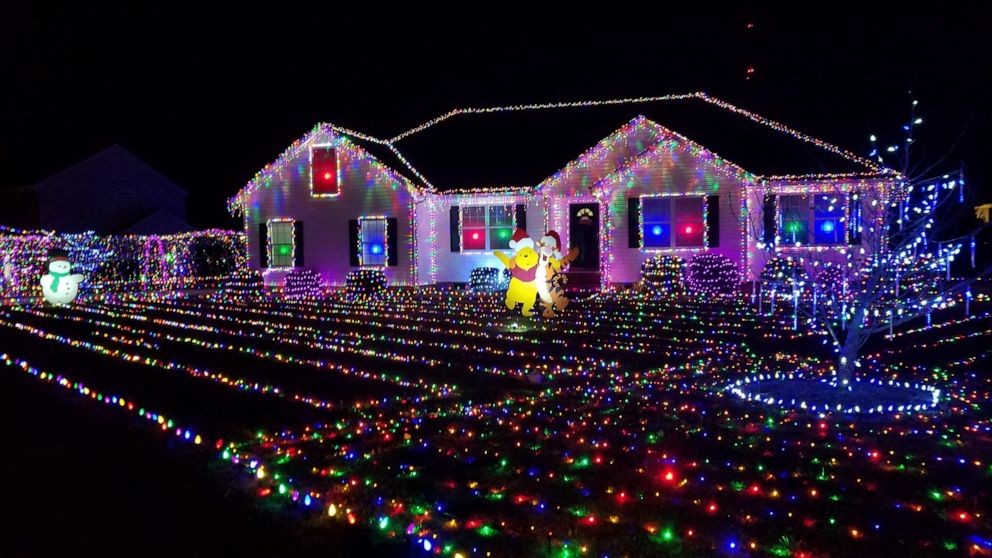 Keith Mitchell
Mitchell keeps track of how many lights he’s put up by counting the number of lights indicated on each string. He also buys most of his lights after Christmas when they're on sale.

Mitchell said that some emotional events have taken place at his lights display. A man once proposed to his girlfriend in one of their tunnel decorations years ago, he said.

Mitchell's wife, Tammie, also said that a woman whose daughter died from cancer was brought to tears by a display featuring the girl's favorite color.

“Her daughter was a cancer child and she died. Her [favorite] color was purple. And for whatever reason, my husband hung up purple colors that year. That woman came through and she saw the purple colors and started to cry hard,” said Tammie Mitchell.

The Mitchells say they are committed to bringing the light display to life every year since 2018. It takes about three months to create the display, they said, and Keith Mitchell gets the help of family, friends and neighbors, he said.

The lights take up so much storage, that Mitchell said he had to add another 6-by-12 foot area onto his tool shed.

This year, he said they started building the display on Sept. 1 and finished the weekend before Thanksgiving. Mitchell said that most of his creative inspiration just comes to him while hanging up the lights.

“I just see what I want in my mind and I just go for it. I don’t plan anything. I just envision it,” he said.

He said he does have plans for next year: only blue and white colors. They will have the lights on display from Thanksgiving to New Year’s Day. The Mitchells said they decided to use the display to fundraise this year and are asking for donations to the Children’s Hospital of the King’s Daughter, where Samaria spent three weeks after she was born.