Several dogs were among the responders sent to Texas Wednesday, one day after a gunman opened fire at an elementary school in the city of Uvalde, killing at least 19 children and two teachers.

The trained animals are all part of Lutheran Church Charities (LCC) K-9 Ministries, a K-9 unit that travels across the U.S. to provide comfort and support to people impacted by disasters such as mass shootings.

Eight of the group's canines, all golden retrievers, are dedicated to the Uvalde community. They range in age from 3 to 9, according to Lutheran Church Charities' K-9 crisis response coordinator Bonnie Fear.

Eight LCC K-9 Comfort Dogs and Hearts of Mercy & Compassion Deploy in Less Than 24 Hours to Mass Shooting at Robb Elementary School in Uvalde, Texas.
Please pray for Uvalde, TX and our teams as they travel today.

Canine responders Cubby and Devorah traveled from Fort Collins, Colorado, while Miriam was sent over from Kingfisher, Oklahoma. Abner, Elijah, Gabriel, Joy, and Triton were already in Texas and headed over to Uvalde from Austin, Houston, Plano, and Wichita Falls. 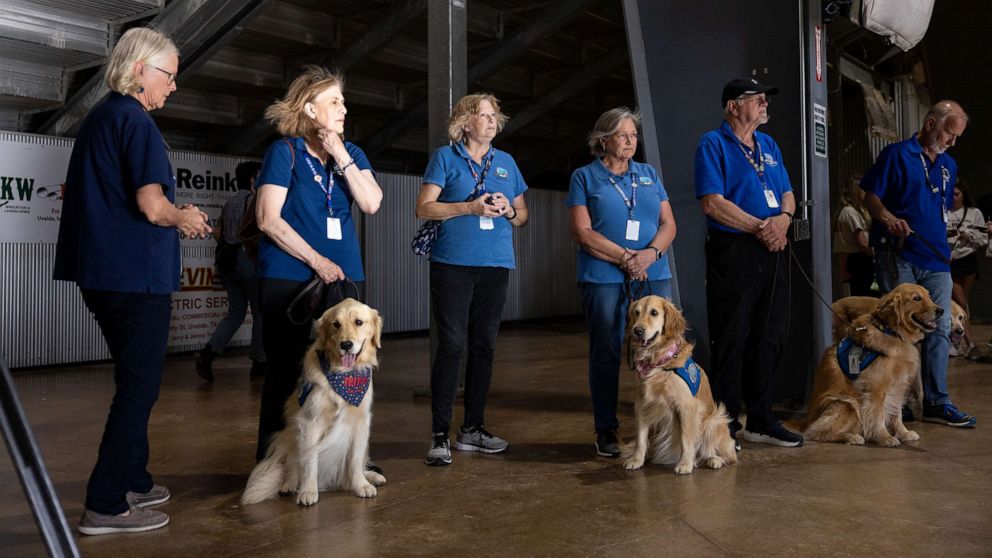 Jordan Vonderhaar/Getty Images
Volunteers with comfort dogs from Lutheran Church Charities offer their services to mourners at a vigil, May 25, 2022, for the 21 people killed at Robb Elementary School on May 24 in Uvalde, Texas.
MORE: 'K9 Comfort Dogs' Help Support Orlando Victims and Survivors

The dogs offer a unique form of support to anyone impacted by the Robb Elementary shooting, including children, adults, local residents and first responders.

"We are going to attend a mass vigil at the fairgrounds in Uvalde at 7 p.m. tonight," Fear told "Good Morning America" ahead of the evening event. "We are also aware and have been directed to the civic center in Uvalde where school staff, teachers, families are gathering, and from there, we hope to connect with first responders, the school staff, families, any churches that request the dogs." 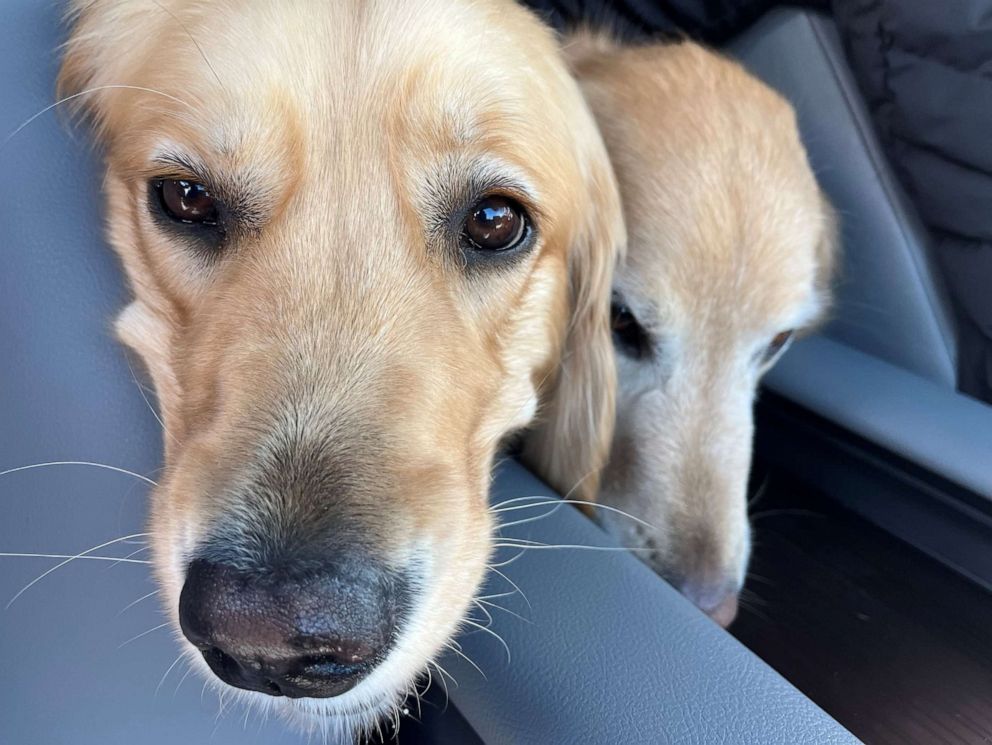 Some of the dogs have responded to past school shootings as well.

"Cubby has been to all the mass shootings and crises with me since 2016," Fear told "GMA," including the Oxford High School shooting last November in Oxford, Michigan.

“We just see a lot of shock, crying, [people who are] distraught, especially coming in the day after a mass shooting," Fear said. "People are not ready to process or listen or answer questions. So we just show up with the dogs."

"We listen if they talk," she added. "We're silent. We let the dogs connect with people and they can express their feelings at that time and we're not counselors, so we are just present, standing with them in their sorrow."

Lutheran Church Charities' president and CEO Tim Hetzner recalled to "GMA" one comfort dog visit that made a particularly lasting impression on him.

"I remember one situation in Sandy Hook, four days after the shooting," Hetzner said, referring to the 2012 mass shooting at an elementary school in Newtown, Connecticut, that left 20 children and six adults dead. "We were at a community center and this couple was there with their young boy. … I had a dog named Howe at that time." 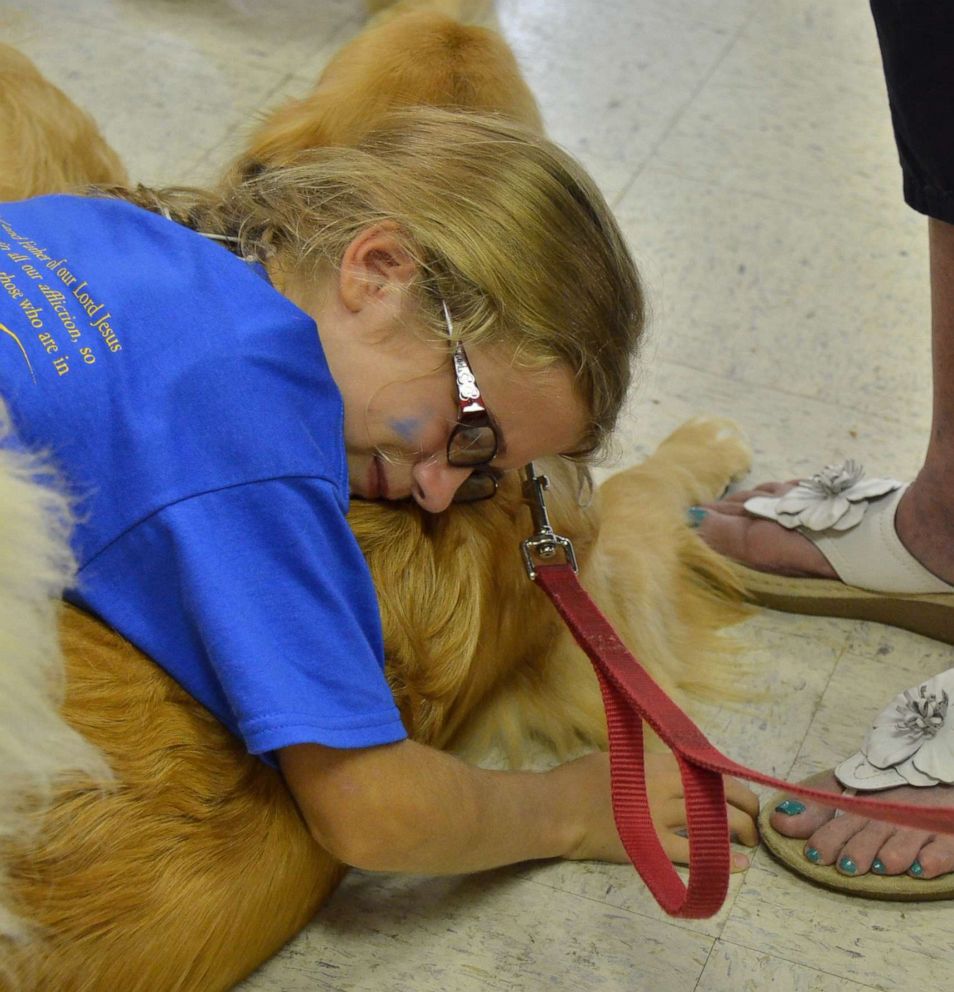 "Howe looked up at the boy, got up, walked over to the boy, rolled into his legs and the boy came down on top of him. They just laid there. After about 10 minutes, the boy lifted up Howe’s ear and told him everything that happened in that classroom. Parents started crying because it was the first time the boy had talked in four days. First time and it was a dog."

Hetzner said the charity has seen an increase in requests for comfort dogs in the last two years. The group's K-9 unit has expanded from four dogs in 2008 to over 130 dogs in 27 states.

The dogs will be deployed in Uvalde until at least Monday and will be given ample breaks to recuperate in between working shifts, the group said.