Across the country, an estimated over 1.4 million children will spend Christmas without at least one parent because they are serving time in prison or jail.

One woman in Columbus, Ohio, Janese Boston, is making an effort to keep local children connected to their incarcerated parents through her annual Build a Bond toy drive.

Boston, 38, shops for hundreds of toys each year and distributes them to kids of incarcerated parents through a partnership with the Franklin County Sheriff's Office.

"Dropping off the gifts, by far, is one of the [reasons] why I do it," Boston told "Good Morning America." "Most kids have no idea that I'm coming and I say, 'Your mom [or dad] sent me here to give the gifts to you."

"They're looking at me like, 'Oh my goodness,'" she added of the kids' reaction. 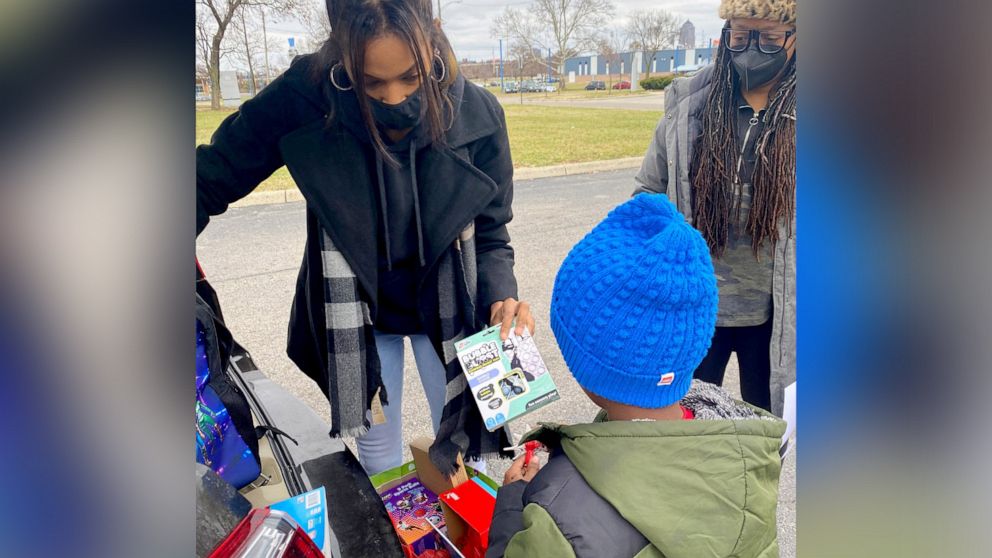 Janese Boston
Janese Boston distributes a toy to a child during the "Build a Bond" toy drive she founded in Franklin County, Ohio.

Boston said she started the toy drive because she knows firsthand how hard it is to be in prison as a parent. She served four years in prison, a sentence she started in 2003, just 30 days after she gave birth to her first child.

Boston's son, who is now 18, lived with her aunt while she served time.

"As a parent being in jail for that long, leaving my baby at such a young age, my biggest thing was would my son know me when I came home," said Boston. "My aunt did a good job of making sure I was connected to my son. She showed him pictures. She brought him to see me. I got to talk to him on the phone."

"Just those little milestones, during my time, it helped me to keep on the right path," she said. "It helped me to realize I needed to put in the work so I could be a better person and make better decisions."

When Boston was released from prison in 2007, she began to care for her son full time and pull her life back together. She used college credits she had earned while in prison to complete her associate's degree, but said she still struggled to find a career.

After giving birth to her second child, a daughter, Boston put herself through culinary school. After working odd jobs in the food industry, she started her own private chef business in Columbus and then began to give back to the community. 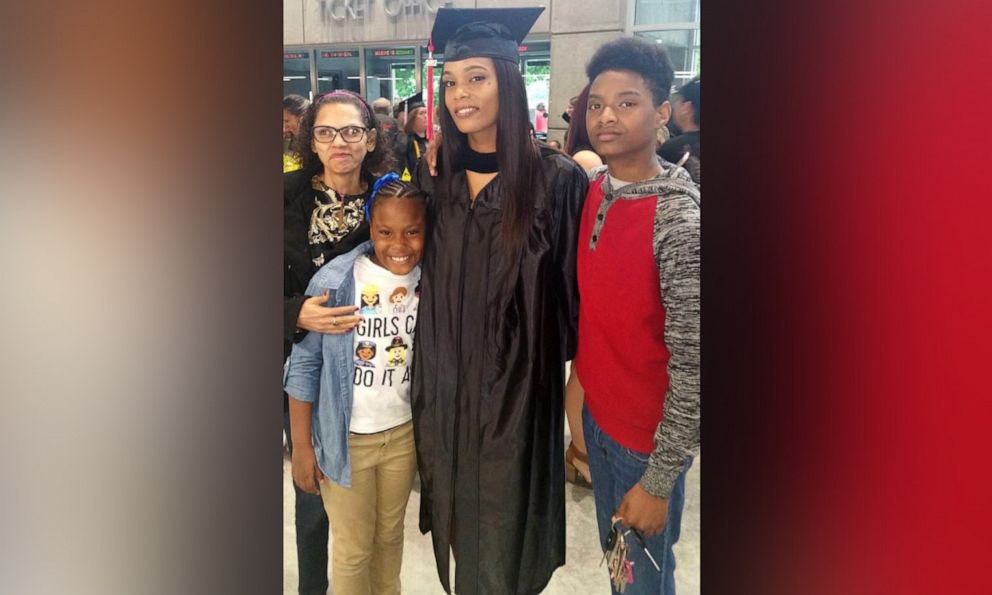 Janese Boston
Janese Boston, of Ohio, poses with her mom and two children at her college graduation.

Boston knew she wanted to help parents in prison keep in touch with their kids and came up with the idea of the Christmas toy drive.

"There's nothing else in a million years that I would rather be doing than try to help [a parent] that's incarcerated because I know myself I was laying in the bed, praying and hoping that they can make it work to make sure my kid had a good Christmas," she said. "That's why when I shop for these kids, the most important thing is to make sure every toy is something these kids will want and will be super happy that their parents gave to them."

Tresalyn Butler, director of social services for the Franklin County Sheriff's Office, works with Boston to identify around one dozen parents for the toy drive. The parents must meet certain criteria to show that they are working to prepare themselves for life outside of prison, according to Butler.

Once the parents are identified, Butler and Boston send letters to the children's guardians, who then send back gift forms that include information like the kids' clothing sizes and their Christmas wish list.

From there, Boston spends several weeks shopping to make sure each child has personalized gifts based on their wishes. 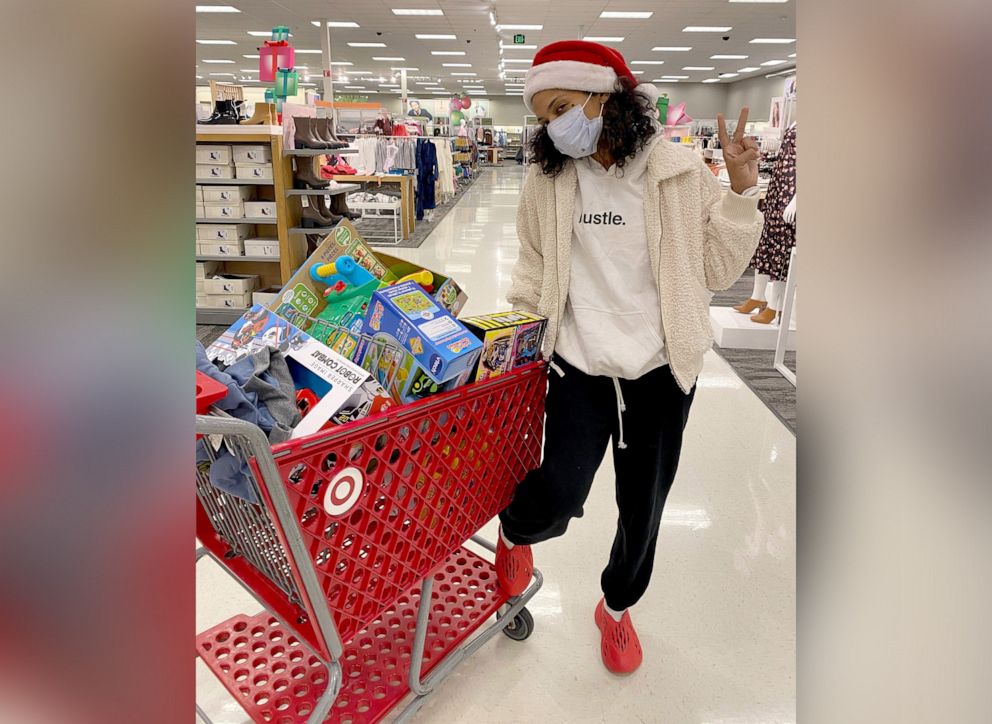 Janese Boston
Janese Boston is pictured shopping for presents to distribute through the "Build a Bond" toy drive she founded in Franklin County, Ohio.

"There's a part of me that feels like I have I have a duty to make sure that every connection with the parent and the kid is phenomenal," she said. "When they put the toys in their hands or the clothes on their body, it is a positive connection between them and their parent."

Boston continued, "Whether it's one time, they play with it five times or every time they put their coat or shoes on, they know that their parents, regardless of where they are, still made it happen to get them something for Christmas."

When Boston delivers the gifts to the children at home before Christmas, she also brings along a handwritten letter from their parent. She said she uses the opportunity to tell them that she too is a parent who spent time in prison.

Butler said the Build a Bond toy drive can often help the parent in prison as much as it helps their child.

"For our parents it's a big deal. Some of them are their family's sole providers. For our dads, it may have been more monetary providing than it was caretaking, and we know statistically that the majority of moms that are incarcerated were the primary caregivers for their children before incarceration," she said. "This allows for them to be able to provide for their kids in a moment where their hands are kind of tied. I think it gives them hope."

Butler said she has also seen the toy drive help start conversations between kids and their parents, saying, "One family in particular, I remember them ripping their gifts open and they were super excited and they wanted to talk to their mom and let her know what they had received. That is always super cool because it spurs conversation between the parents and their children during what can be an uncomfortable time in their lives."

The money for the toy drive comes from the fundraising Boston does on social media and in the community. The sheriff's office does not provide any funding, according to Butler.

Butler and Boston each said they hope to expand the toy drive to include more parents and children and to hold similar events throughout the year, rather than just at Christmas. 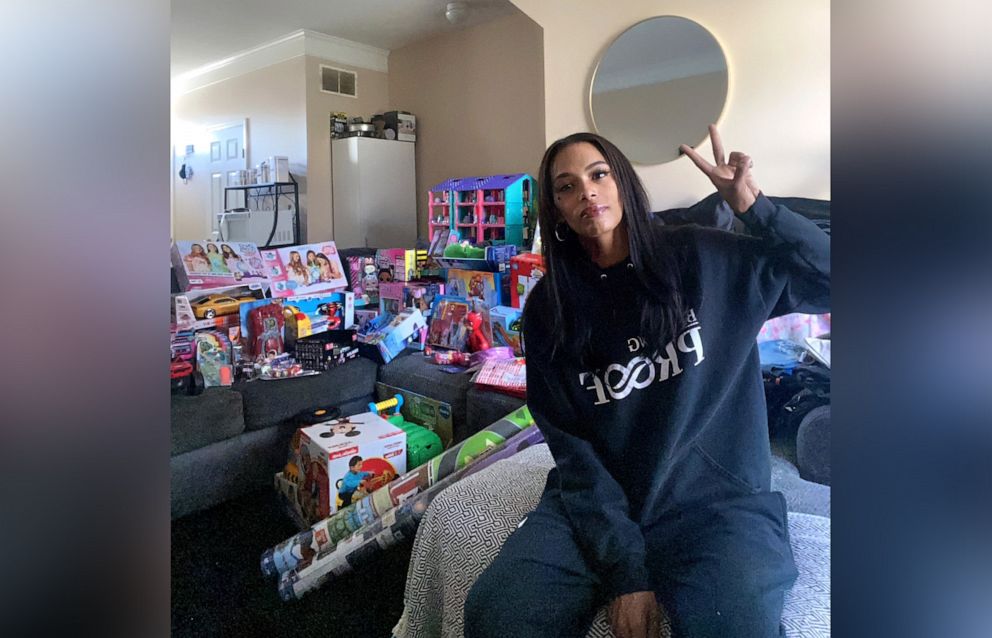 Janese Boston
Janese Boston poses in her home with presents for kids in the "Build a Bond" toy drive she founded in Franklin County, Ohio.

Butler said she sees children as the "forgotten element of incarceration" and hopes that by continuing to strengthen the parental and child bond, it will make for a better future for the parents and their families.

Boston called it a "dream come true" to be able to give back to incarcerated parents.

"I spent days in jail hoping that I could give back and all these years later, I'm giving back in a way that I could ever imagine," she said. "I am so thankful that I got myself together and that I got some education, I got a business and that God put me in a situation to even do this."