The back to school season for Jillian Glawson, a mom of three in Texas, looks much different this year.

Instead of just shopping for pencils and backpacks for her two older kids, ages 8 and 5, Glawson is searching for curriculum plans. She and her husband have decided to homeschool their kindergartener and third-grader instead of sending them back to their local public school during the coronavirus pandemic.

"Probably the primary reason was the inconsistency of whether or not they were going to shut down and how they're going to do it," Glawson said of her school district's plan to deal with COVID-19 outbreaks. "Right now they said they'll close for five days if there's a positive [COVID-19 case]. How often are they going to do that? How strict are they going to be?"

"For kindergarten and for third grade to be interrupted all year long was not going to be feasible for us," said Glawson, adding that she also found it frustrating last spring to watch her older child sit in front of a computer for hours each day when her school switched to virtual learning. 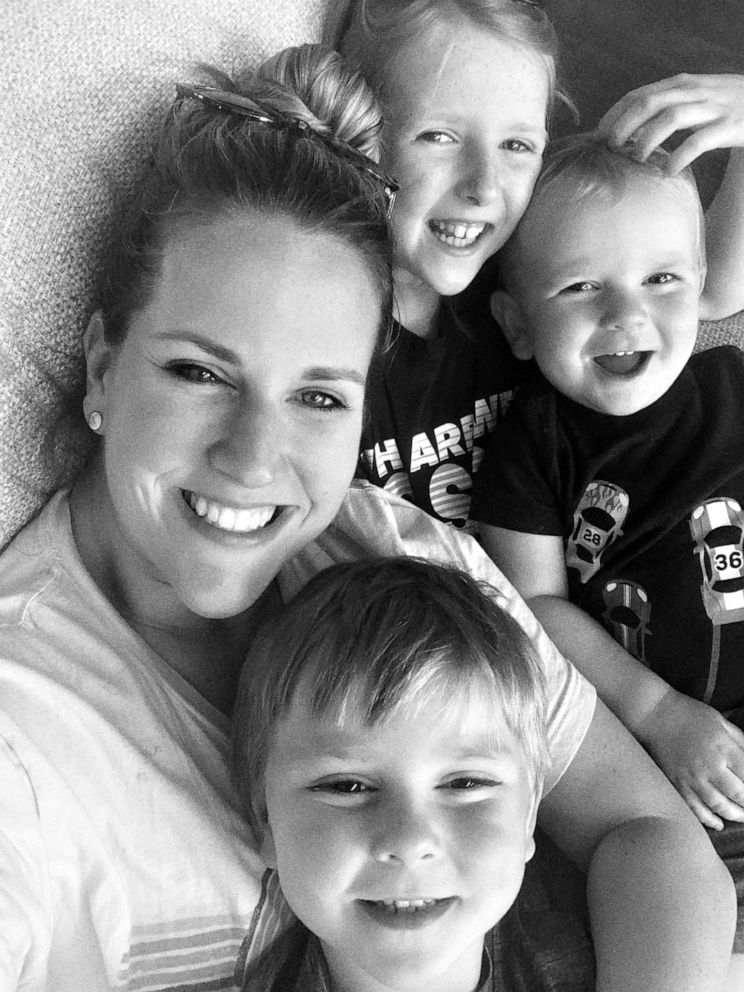 Glawson is one of a growing number of parents who are turning to homeschooling as school districts across the country struggle to respond as the number of COVID-19 cases in the U.S. continues to grow.

In Texas, Glawson's home state, the Texas Home School Coalition, a coalition of three homeschool-focused organizations, has experienced triple its usual call volume in the two weeks since the state's education agency announced its guidelines for school reopenings, according to Stephen Howsley, the coalition's public policy analyst.

"We see a lot of families coming to us asking, 'How do we get started? We want to make this big change,'" Howsley told "GMA." "We've seen that the public view of homeschool has increased."

Two national homeschool organizations, the National Homeschool Association and the Home School Legal Defense Association, also told "GMA" the volume of inquiries they are each receiving is "through the roof." Both groups said they are receiving interest from not just stay-at-home parents but working parents as well who are anticipating having to juggle their full-time jobs with education and childcare responsibilities.

"One of the things we're seeing is just an enormous amount of innovation and creativity in how families are organizing themselves to be able to meet the needs of their children today," said Jim Mason, vice president of the Home School Legal Defense Association, a nonprofit organization. "With homeschooling, parents can pick from a huge range of options that can be tailored specifically to not just your children, but to each one of your children."

The surge of interest in homeschooling comes at a perilous time for the public school system in the U.S., which consistently faces budget cuts and is now facing a pandemic that has seemingly stretched the system to the limit.

"It could be the case that many families once they go to [homeschool], may choose to leave public education, which is already vulnerable in terms of its funding, in terms of its support," said Prudence L. Carter, dean of the Graduate School of Education at the University of California-Berkeley. "People are talking about the threat of privatization of education, the threat of moving and going into different spheres and what will that mean and I think that’s something we have to be really mindful of."

There are currently more than 50 million students enrolled in public elementary, middle and high schools in the U.S. As of 2016, the most recent data available, 1.7 million children were enrolled in homeschool programs, a number that nearly doubled from 1999, according to the National Center for Education Statistics (NCES).

As more parents consider the option, here are six common questions about homeschooling answered by experts.

1. How do I know if homeschooling is right for my family?

The decision to homeschool is of course a very personal decision based on factors ranging from a child's situation in school to their learning style and the dynamics of the family, experts say.

"Teaching is not easy. It’s actually an art," said Carter. "It is the case that there are some natural teachers among us, and it is also the case that some parents are not going to be patient enough for their children."

"There’s no one particular learning style and sometimes it’s repetitive and you have to do it over and over again," she said, adding that parents of children with special needs and learning disabilities need to take extra steps to make sure their children will be supported in a homeschool environment.

When it comes to academics, Dr. Joseph Murphy, associate dean at the Peabody College of Education of Vanderbilt University, recommends parents ask three questions to see whether their children are succeeding in a school environment or need a change.

"Are your kids engaged meaningfully [with learning]? Did they build their own understanding, or was it passed to them on a piece of paper? Has that been molded an into understanding of why things are the way they are," he said. "Those are the only three issues that parents need to have their fingers on.

2. What do I need to do legally to homeschool my child?

It depends on where you live, according to Mason.

Oversight of homeschooling is a "state and local responsibility," according to the U.S. Department of Education, which does not does not "regulate or provide financial support" for home schooling students. The Home School Legal Defense Association (HSLDA) has a map of state laws on its website that parents can access for free.

In Texas, a state where homeschooling is not heavily regulated, Glawson said she simply had to email the registrar at her children's school to say they were withdrawing.

In New York, a state with more oversight, homeschool parents must submit an Individualized Home Instruction Plan (IHIP) each school year and file quarterly reports to a school district official, among other requirements, according to the HSLDA's analysis of state laws.

3. What is the cost of homeschooling?

Because of the resources available online -- many of them free -- homeschooling can be very inexpensive, according to Mason.

There are also curriculums available online that can cost as much as $1,500 and include materials and access to online classes.

"It can be very inexpensive to really expensive, depending on what you want to do," said Mason, who added that homeschooling expenses cannot be written off on taxes. "But typically the expense of actual schooling is not as high as many people fear it would be."

In Texas, for example, the average out-of-pocket cost for homeschooling is $300 to $500 per student, according to Howsley, of the Texas Home School Coalition.

4. Is homeschooling the same as virtual learning?

No, homeschooling a child is not the same as providing support to children who are learning at home through via their school, as many school districts are planning to do this fall, according to Carter.

"It’s important to differentiate," she said. "What most of us are doing is not homeschooling. What we’re doing is providing some provisional supplementary support for our children, many in conjuction with school districts that will be providing some lesson plans and some face to face time via Zoom with educators and other kids."

The difference between homeschooling and virtual learning or being in a regular classroom setting is also a mindset, according to J. Allen Weston, the founder of the National Homeschool Association.

"Homeschooling is a mindset. It's a lifestyle," he said. "It's a way of trying to bring joy to learning for a child or maintaining that joy of learning."

Weston said learning to homeschool often requires parents to unlearn how they and their kids were taught in traditional classrooms.

"Parents are often tied into the schools' way of doing things, where it's a reward and punishment system, where you feel pride if you get a good grade and shame if you get a bad grade and it's all about the external rewards of doing your 'job' at school," he said. "Homeschooling is really about finding ways to make learning organic, to make it fun and interesting and not have to focus on the minutiae of all that kids are taught in schools."

5. How do I find the right curriculum for my child?

Glawson, the mom in Texas, said finding a curriculum to use has been the hardest part of her homeschooling journey simply because there are so many options available.

West suggests that parents first ask themselves whether they want to follow a faith-based or secular curriculum.

The next step is to decide whether they want to go a more traditional route -- i.e. trying to recreate a school environment at home -- or if they prefer "unschooling," which gives more freedom to kids to decide what they are interested in studying.

From there, homeschooling parents have even more options, from joining homeschooling groups and co-ops to doing project-based learning.

Project-based learning involves coming up with a project your child is interested in and then incorporating all the school subjects in that one project, according to Weston.

"Maybe your child is interested in Superman," he said. "You'd come up with a way to integrate science and say, 'Let's talk about Superman, who shoots lasers. What are lasers and how do they work and why do they burn through things? How long would it take for Superman to fly around the planet?'"

When it comes to choosing a curriculum, the benefit for homeschooling parents is they can take parts of different options and also quickly pivot if the curriculum isn't working for their child, according to Mason.

"When you're making this decision, you really have to do what's best for your family and for your child," he said. "In general, I think the flexibility that homeschooling allows really does meet the needs of most children, which is great because it's not very one size fits all and you're able to customize the education for each child."

6. Can a working parent also homeschool their child?

Yes, working parents can homeschool their kids because it allows for flexibility but parents need to understand the level of commitment required, both in time and philosophy, according to Mason.

In terms of the flexibility homeschool allows, parents and kids can set their own schedule instead of being tied down to a school schedule of virtual lessons or in-person classroom time and homework. Homeschooling also allows parents to zero in on their kids' learning for a concentrated amount of time, and to incorporate the learning into everyday activities, according to Weston.

"Parents have it in their head that they have to be doing this book stuff for eight hours a day or sitting in front of a screen and being productive," he said. "But if they're playing games like Monopoly, where they can learn math, or cooking and learning fractions, those are the ways that kids learn, because they're experiences that they enjoy doing and they see the relevance."

"And you don't have to know everything [about the subjects], because you ask [your child] to teach you, and that's a much better way to learn," Weston added.