Spruce up your holiday dinner table this year with DIY cinnamon and rosemary place settings created by actress Sasha Pieterse.

"I have this passion for entertaining; I've always loved cooking and baking," said Pieterse, who recently released a new book, "Sasha in Good Taste: Recipes for Bites, Feasts, Sips & Celebration."

Pieterse said she's been cooking and baking since she was a teenager, and when she got her own place she loved having people over. 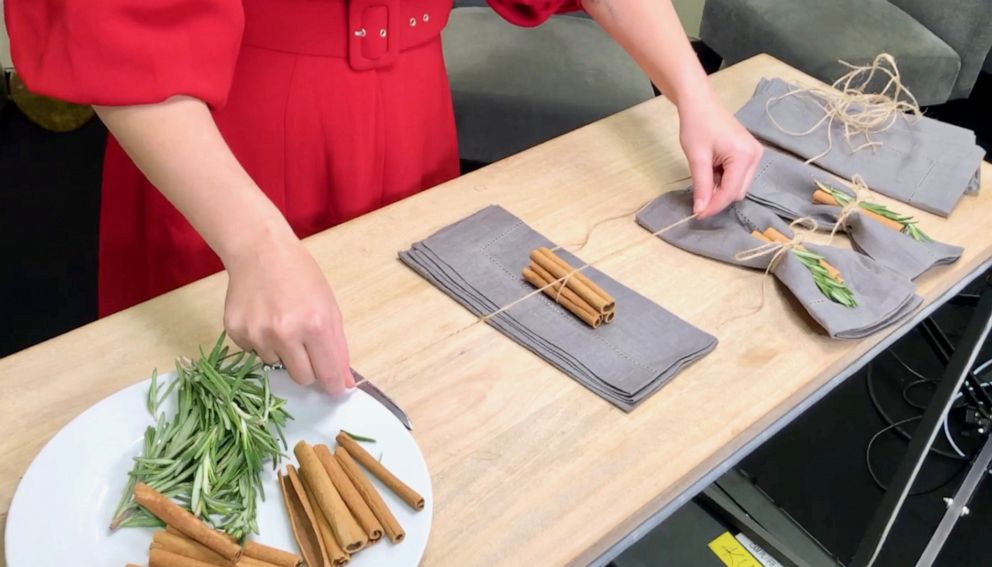 ABC News
Actress and author Sasha Pieterse shows how to make holiday place settings with rosemary and cinnamon in Los Angeles, Tuesday, Oct. 15, 2019.
(MORE: Your scientific excuse to decorate your house even earlier for Christmas: How decorating can boost your happiness)

"I like to create something different for each holiday," Pieterse said.

These place settings are special because they add a personal touch.

"I like to add a tag to it, whether it says, 'What are you grateful for?' or whether it's someone's name or a cute little quote," Pieterse said.

Here how to make the place settings:

2. Tie your cinnamon sticks together with the twine and double knot it.

3. Add a sprig of rosemary to the knotted cinnamon sticks.

"Not only does it smell good, but it puts a little fresh touch and it really does feel like the holidays," Pieterse said.

4. Place the cinnamon and rosemary in the center of the napkin. Take the string and wrap it around the napkin twice.

5. Shape the linen with your hands and finish it off with a bow.

You can place it to the side of each plate or at the center. Enjoy!