Josh Smith, a quadriplegic, has been unable to walk or perform most activities after an accident seven years ago.

So when Smith proposed to his girlfriend, Grace on bended knee, it was a big surprise for his friends and family.

Smith was able to do so using an exoskeleton suit.

MORE: How groundbreaking new technology is helping people with paralysis

"I had this huge idea, and I didn't know if it was even possible because I don't think I've ever seen anybody do it before," Smith said. "So, I reached out to my therapists and told them I wanted to try to get down on one knee to propose, and I was hoping that we could use the exoskeleton to help with that." 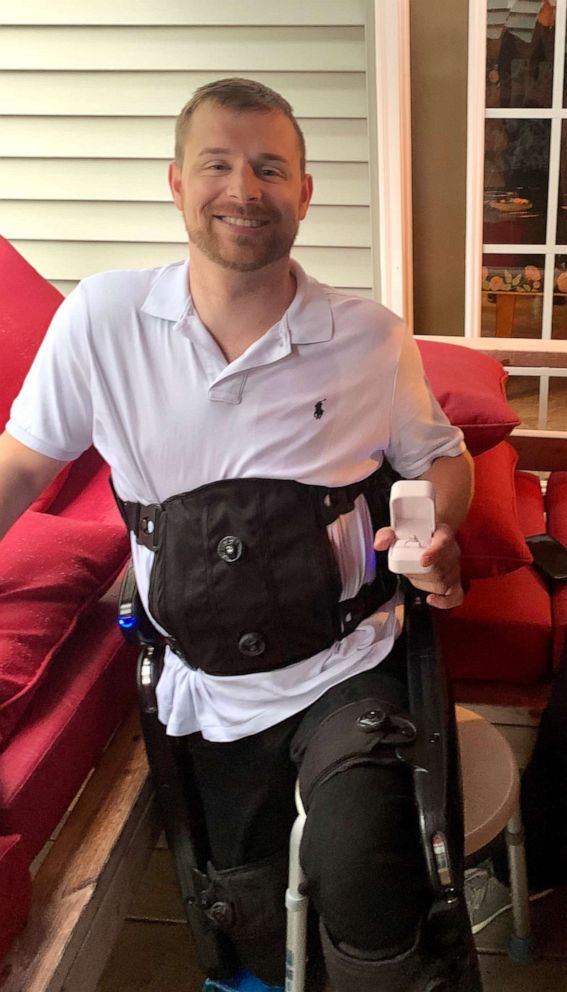 After he was given the green light, Smith got to work. But just like the last few years of his life, he knew it wouldn't be easy.

In August of 2014, Smith was visiting some friends in Virginia Beach when he dove into a wave head first, slamming into a sandbar. He was instantly paralyzed from the chest down.

"I was floating there face down and couldn't move anything, but my eyes were open," Smith said. "It took me a little bit to realize that I couldn't move at all and then once I came to, I thought I was going to drown there."

"It was really scary," he added. "Luckily, my friends dragged me out onto the beach and waited for the paramedics to get there."

At 23 years old, Smith said he realized he would be in a wheelchair for the rest of his life. 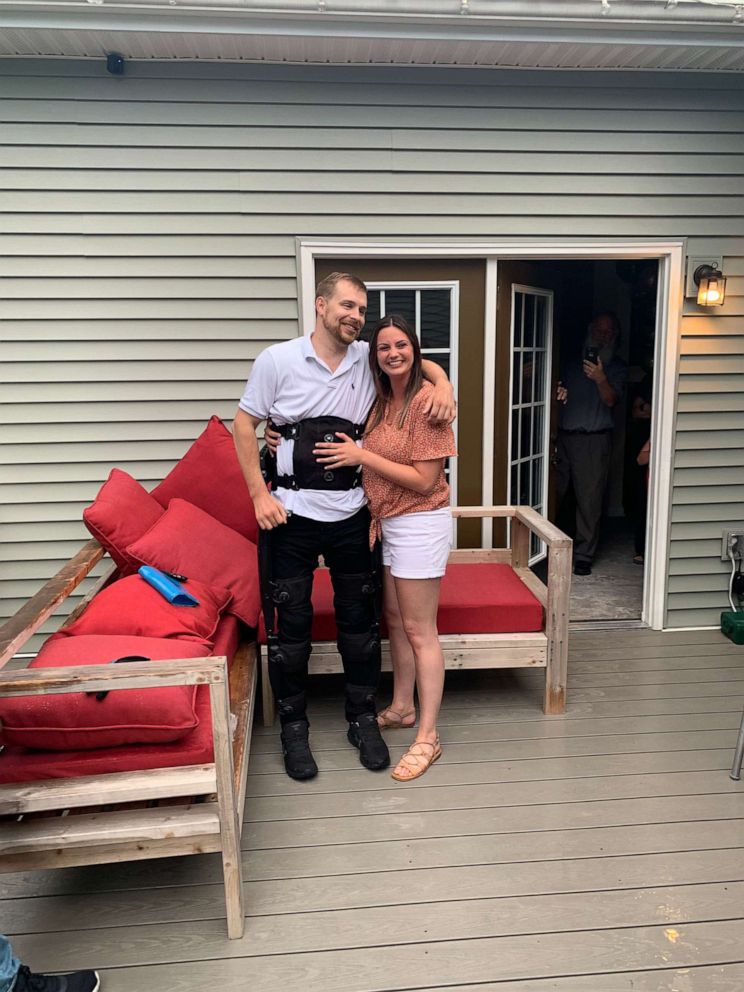 The weeks following the accident were tough for Smith. He spent up to four months at the Shepherd Center, a spinal cord and brain injury rehabilitation center in Atlanta, where he worked with therapists to help him adjust to his wheelchair. Shortly after, he returned to his hometown of Richmond, Virginia, where he continued life, but forced to look through a new lens.

"Life as Josh knew it had changed in one horrific instant," his mother , Caroline Smith said. "With his level of injury, living independently is very hard to achieve, but we worked together as a team to help him reach that goal."

In under a year, Smith was making stride. He could drive an accessible van, work full-time, participate in adaptive sports and even invent products and tools for those, like himself, with limited motor functions. A little over two years after his injury, Smith lived in an accessible home he custom built for his needs, his mother said.

"It was kind of just my own drive that really pushed me forward to get independent and learn new things," Smith said. "Help from my parents definitely makes things easier too."

Although Smith said his life improving, there was one aspect of his life that he knew might not ever be the same again -- dating.

"My self-confidence kind of went down the drain a little bit," he said. "I didn't really think anybody would want to date me, let alone marry me."

In February 2020, that notion changed when Smith connected with a woman named Grace Thompson on a dating app and realized they had a lot in common. Both Richmond natives, they discovered they attended the same church. 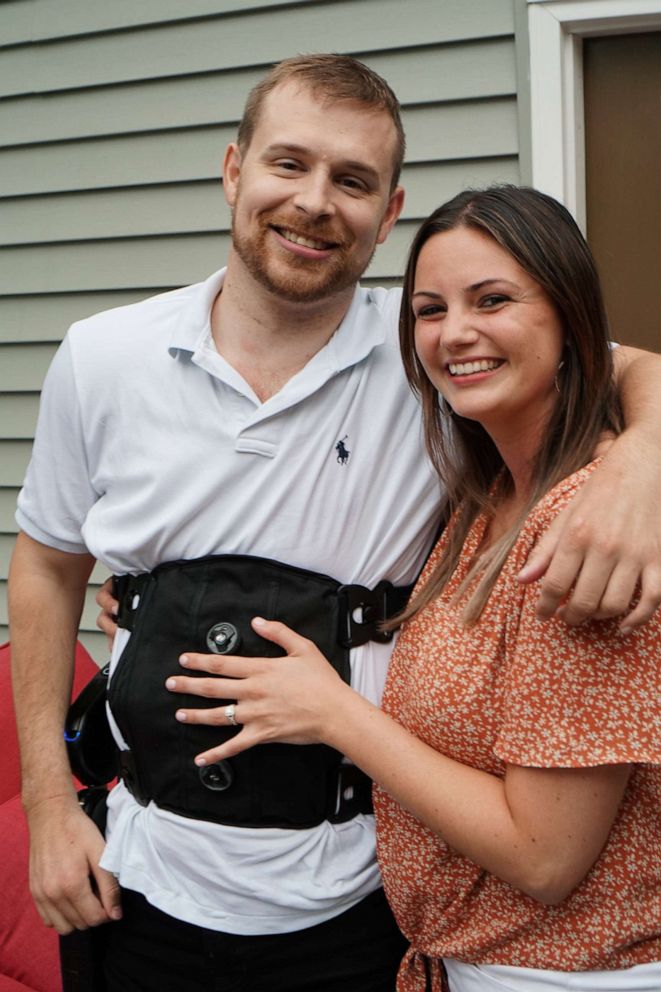 "The pandemic played a huge role in how serious we became because we went on the perfect amount of dates to where we both felt safe and comfortable not being in public anymore," Thompson, 26, said. "We were pretty lucky in the timing of it all. It was a lot of game nights with another couple that we got close with during quarantine. We liked to cook dinners together and play games, and it was kind of nice to because, you know, we were still getting to know each other. We had a lot of great conversations and went out to parks a lot. He's the only guy I've ever dated who I really work out with -- which most people would be surprised at because he's in a wheelchair -- but he's more active than most people I know."

MORE: Against all odds, this quadriplegic vets starts a family

After being in a relationship for over a year, Smith said he knew Thompson was meant to be in his life forever. He planned a proposal which would include the use of the exoskeleton suit -- made up of motorized leg braces -- allowing him to get down on one knee and pop the question.

"I went to the hospital and met with a therapist twice to sort of work through the kinks and discuss how we were going to do it," he said.

After sending Thompson off with her best friend to get a manicure, Smith made the final arrangements, waiting on the deck of his home in position while friends and family waited inside. 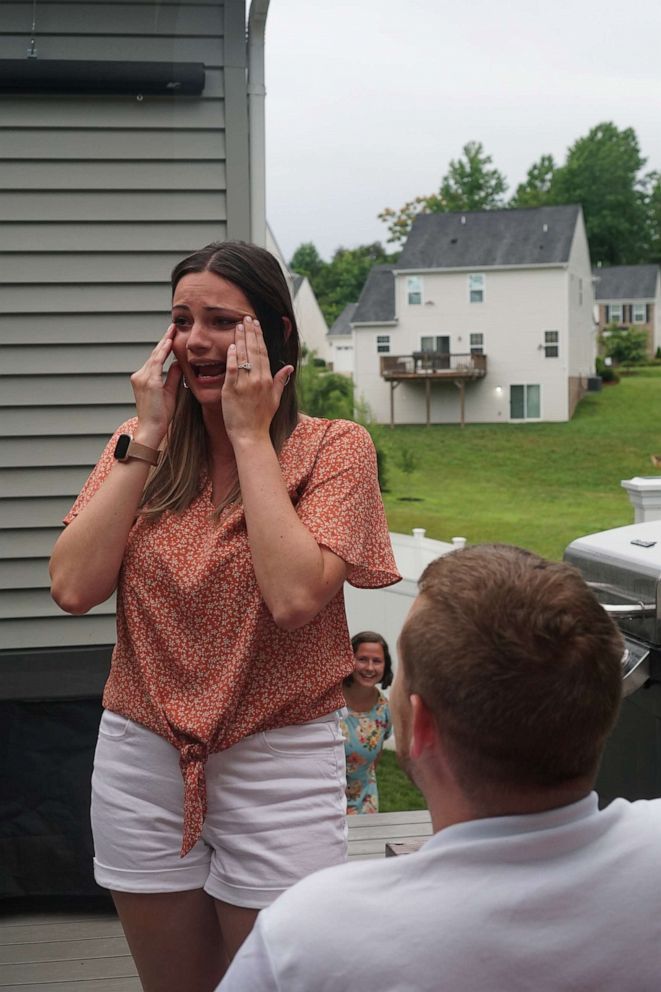 "It was just the easiest place for the therapist to set up the exoskeleton and things were just in a much more controlled environment," he said. "It was a little bit less stressful."

Thompson said she was completely shocked to see Smith down on one knee after she took off her blindfold.

"I just kind of froze, staring at him and I felt like I couldn't move," she said. "Then my family and his family started pouring out and I was like, 'Oh! It was very overwhelming but in a good way."

"It was really cool that he was able to get on one knee, she added. "But to see him stand up -- I've never seen him stand before, so that was really great and it was really strange to, like, have him hug me standing up! I wish we could do that more!"

Thompson said that meeting one another was meant to be, fueling her ambition to go to nursing school to help those who, like Smith, really needed it.

"There really is someone out there for everybody," Thompson said. "And I think on my end of things, and from what I've learned, is to just try to be more patient and learn how and when to help him and know when he wants to do things on his own."

The couple said they plan marry in October of next year and look forward to traveling more in the coming months.

"Everyone deserves love," Smith said. "Sometimes you don't know how it will come but it will always come when you're least expecting it."