After 11 grueling hours, Hannah Gavios crossed the finish line of the New York City Marathon, completing the entire race on crutches. But the 25-year-old said she didn't do it for the medal.

"One of the biggest motivators on the 26-mile journey was just thinking, 'I'm not just doing this for myself, I'm taking steps for others, people who aren't able to take steps,'" Gavios told "Good Morning America." "It means a lot to give back to my community, my city and motivate other people." 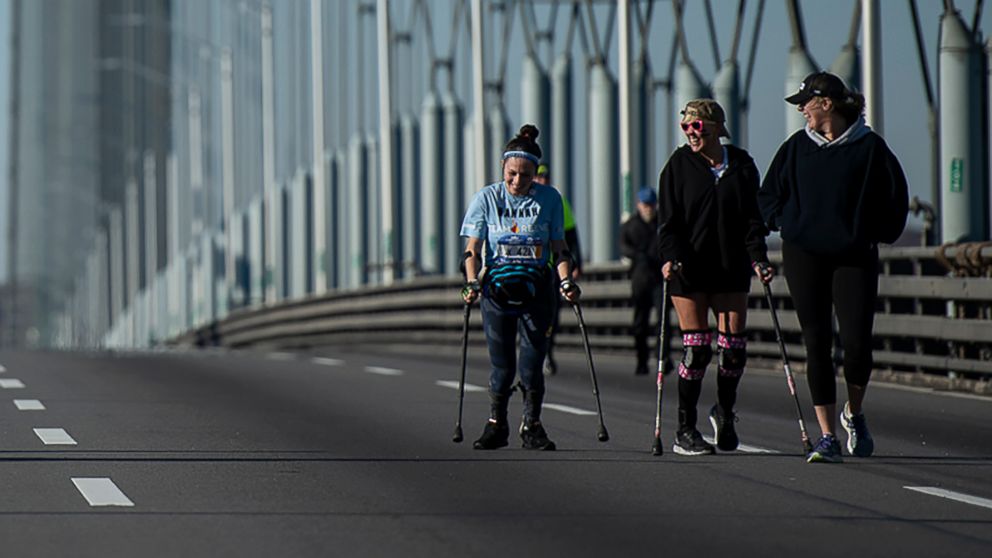 Gavios ran the race Sunday to raise money for spinal cord research as part of Team Reeve after an accident left her paralyzed in 2016. While lost in Thailand, she said she was assaulted by a man who offered to direct her back to her hotel. While trying to run away from him, she fell 150 feet off a cliff and "landed with a broken back, unable to move anything," she wrote on her Team Reeve fundraising page.

"Amazingly, even after further assault, and more than eight hours later, I was rescued and thus begun my long road to recovery," Gavios wrote.

That situation might have broken most people, but Gavios, a native New Yorker, kept going. She completed the 26.2-mile marathon Sunday supported by her father, her sister and her "hero," Amanda Sullivan, the woman who taught her how to "crutch." She was also cheered on by thousands of fans.

(MORE: Why a pizza delivery man drove more than 200 miles to deliver a pie)

Since she crossed the finish line, Gavios said it hasn't just been other people living with paralysis who have reached out to her with their congratulations. Even family members struggling in other areas of their own lives have thanked her for sharing her story.

"It's just been so great and so positive to hear that kind of feedback," she said.

Gavios told "GMA" that during the marathon on Sunday, it was the crowds and her fellow marathoners that kept her going.

"All the cheering just brought so much joy and fulfillment and power inside me, just gave me so much fuel to get through it and get it done," she said.

(MORE: Blind marathon runner and his sighted trainer fall in love, prepare to race the New York City Marathon together)

Congrats to Hannah for completing the @nycmarathon!! You are truly an inspiration! Big round of applause to all #TeamReeve members that crossed the finish line!

Gavios added that she wasn't focused on her time in the race, but just truly enjoying the journey. She was met by her father at mile 13, and walked on crutches the entire way with Sullivan, a woman who had been severely injured years back in a car accident and crutched the 2017 marathon in honor of her mother, a cancer survivor.

Gavios also said it was Sullivan who gave her the motivation she needed to compete in the race this year.

"I had no idea I would do the whole thing with her," Gavios said with excitement about crutching with Sullivan. "There were just so many memories that were made Sunday night to look back on. That wouldn't have happened if I accomplished this in a shorter time. It was truly an amazing experience."

She continued, laughing, "Don't get me wrong, there were def moments that sucked."

Gavios said Sullivan tried to tell her that when she crossed the finish line, she would feel no more pain.

Unforgettable day!!! Crossed that finish line with @crutching_tigress. We stayed together the whole 26.2 miles????. Thank you to everyone who rooted for us!???? #TeamReeve #ProjectPurple #Espn . . If you haven’t had a chance to donate, please support #TeamReeve by clicking the link in my bio. Every dollar will speed up the process of finding a cure for paralysis. Soon I will RUN the NYC marathon. Thank you for your support, you’re all amazing!!!?

"I'm definitely not going to forget this pain," Gavios said, laughing again. "Everything hurts, but you have to keep telling your self to go and go."

As for what's next for the inspiring young woman, she has upped her fundraising goal for Team Reeve to $30,000 and wants to continue to work with the organization to raise awareness for those living with paralysis.

"I feel so confident and prepared. And ready to crush 26 miles!" - Hannah Gavios, #TeamReeve @nycmarathon | via @yahoolifestyle

"This research will give us answers on ways we can connect the damaged telephone cord, so that messages will seamlessly transfer from the brain to the rest of the body," she wrote on her Team Reeve page. "This year I am crutching the marathon, but soon you’ll see me running it."

6 hours of crutching in the freezing cold!!! #imdead #26miles #whydidisignupforthis

Gavios told "GMA" that she wants to "give everybody that hope -- it's all about what you do with your pain."

"I was very inspired by Amanda Sullivan, she said, 'Your pain can bring others down, or you can use it to lift other people up!'" Gavios explained. "We can't always control what happens to us, but we can control the way we react to that."