The Gullah Geechee culture has been around since the start of America, and in fact, helped build the nation. Today, those part of the distinct group of Gullah people with deep roots back to Africa are working hard to preserve their culture.

Gullah Geechee people are African American descendants of enslaved, mostly West Africans who were forced to work the rice, indigo and Sea Island cotton plantations on the southeastern coast.

A vibrant, rich culture was created along with a way to communicate -- a unique English-based, Creole language called Gullah.

The words "Gullah" and "Geechee" are often used together but the exact origins of the words are unknown. Many believe "Gullah" comes from Angola, Africa, were many of the enslaved people were brought from to the U.S. Some think "Geechee" refers to Gullah people who lived around the Ogeechee River near Savannah, Georgia.

One thing is certain: whether it's through art, historical figures or food, the impact of the Gullah people on the nation is undeniable.

Some say that soul food or Southern cooking can be attributed to the Gullah. Southern, seasoned favorites like shrimp and grits, okra, and red rice are all original Gullah dishes.

Along the Atlantic Coast in the south, people can feel that Gullah Geechee spirit and there's no ambassador quite like 80-year-old Mary Rivers LeGree of South Carolina's St. Helena Island.

"This was not widely known that there was something special about our culture," she told ABC News.

On the sea island, LeGree is the caretaker of one of three Gullah praise houses left in the area. Praise houses were small -- typically 10-by-15 foot buildings -- that were built as a gathering place for enslaved people to pray and reflect on their blessings. 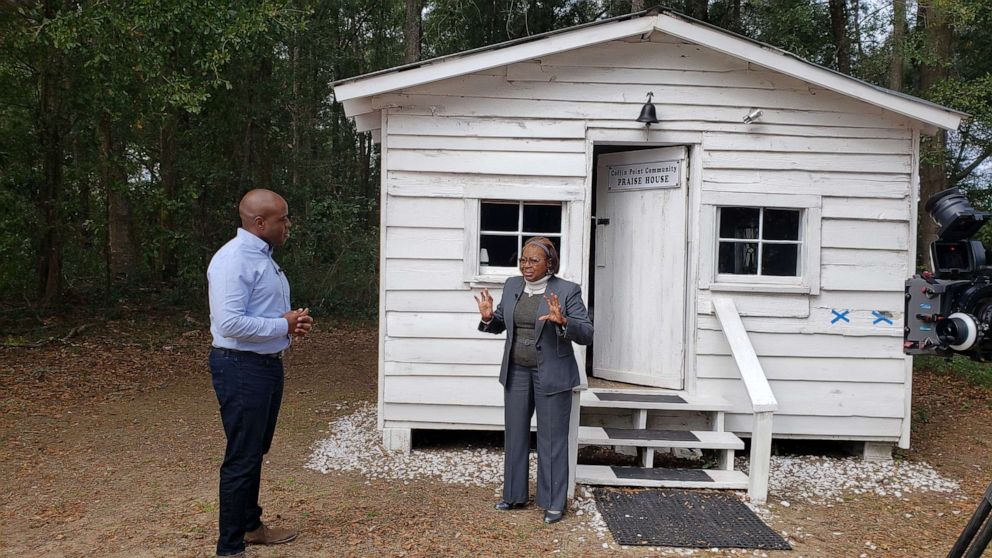 ABC News
Mary Rivers LeGree of South Carolina's St. Helena Island is the caretaker of one of three Gullah praise houses left in the area. Praise houses were small – most 10 ft. by 15 ft. buildings – that were built as a gathering place for the enslaved to pray and reflect on their blessings.

LeGree said she hopes the remaining praise houses will be a source of inspiration for younger generations as she works to preserve the Gullah culture.

More people are feeling a greater sense of pride about being Gullah and Geechee.

Victoria Smalls, the executive director of the Gullah Geechee Cultural Heritage Corridor, said the mission of her group is to protect, preserve and sustain the Gullah culture by lifting up the people.

Smalls said she believes there are ways to keep the Gullah culture alive by not only talking about it but reminding the nation of key Gullah figures in history like Robert Smalls (who is of no relation to Victoria).

Robert Smalls was a former slave, statesmen and one of the first African Americans to serve in Congress.

In Beaufort, South Carolina, visitors will find the Robert Smalls House. The Civil War hero for the Union purchased the property where he was born a slave and advocated for Black land ownership. The man who created legislation to bring free public education to South Carolina for every child during Reconstruction is known for saying all his race needed "is an equal chance in the battle of life."

"My ancestors, Adam and Betsy Smalls, also purchased land during that time," Victoria Smalls told ABC News. "And we still own 20 acres of the land that was purchased. It is empowering … because we can sustain ourselves as a family. We can grow crops on it."

Smalls said the Gullah culture is more important now today than ever. "More people are feeling a greater sense of pride about being Gullah and Geechee. When I was growing up in the 70s, people would call you 'geechee' and those are fighting words."

Many people inside and outside of Gullah nation credit a first-of-its-kind, 1990s children show called "Gullah Gullah Island" on Nickelodeon for changing the image of the Gullah people.

"There was this richness and purity to the culture that time hadn't passed in a way," said Perez-Brown. "We didn't want to go there and exploit the culture and say do it like this because it's going to work for camera. And we had ambassadors. Ron and Natalie opened those doors for us."

The responsibility we have as creators of color of television and content of any platform to make sure our kids have images that look like them.

Twenty-five years later, Perez-Brown says there's still not enough TV content that reflects children of color but there are more positive images of the Gullah people.

"Between the art and some of the movies and some of the shows since we did ours, I feel that they've had an opportunity to capture that culture," she said. Perez-Brown told ABC News that when it comes to that type of programming highlighting Black and brown people, "I see the responsibility we have as creators of color of television and content of any platform to make sure our kids have images that look like them."

3:55
ABC’s Kenneth Moton traveled to South Carolina to learn more about the sacred and unique art of basket weaving.

There are images of South Carolina's Lowcountry that are just quintessential from the captivating marsh to the Southern charm of downtown Charleston.

But on Highway 17 in nearby Mount Pleasant, there's no image that strikes the soul like those sweetgrass baskets of the Gullah Geechee people. The craft came to the southeastern coast in the 1600s when enslaved West Africans and ancestors of the Gullah people were brought to the area. The highway is designated "Sweetgrass Basket Makers Highway" to honor the legacy of the state's official Lowcountry handcraft.

"I love my community. I absolutely love it. There is nothing like being Gullah in the world," said basket weaver Andrea Cayetano-Jefferson. 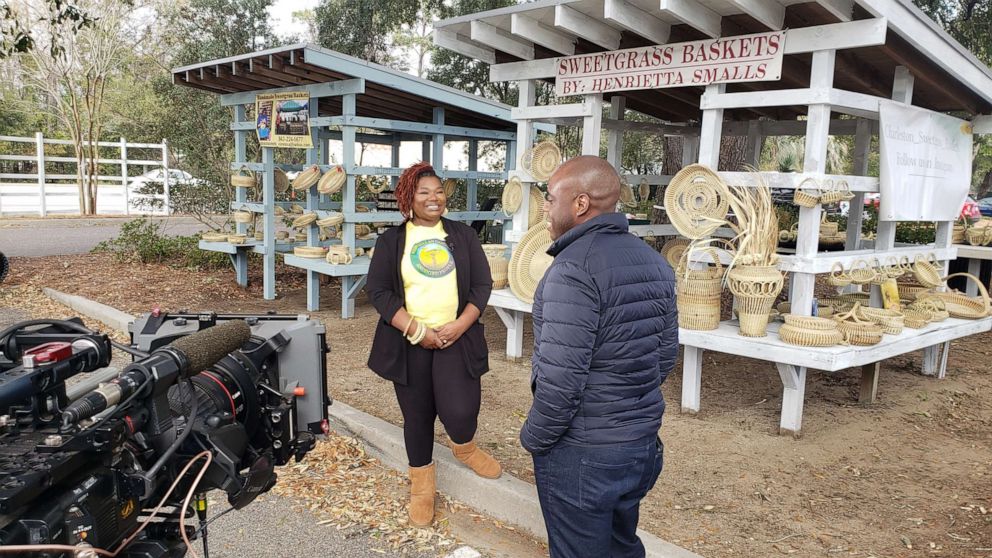 ABC News
Basket weaver Andrea Cayetano-Jefferson has her own business weaving the intricate baskets since she was a child.

The 42-year-old said she has had her own business weaving the intricate baskets since she was a child.

"Growing up sowing baskets was like, you would hide it. It was demeaning work," Cayetano-Jefferson said recounting how she was ashamed to tell people in high school that she made baskets. "It's like you make baskets, oh, you're an old lady. And I'm like, there's nothing old about me. It's not just baskets. It's art. I'm an artist."

Each basket is one-of-a-kind taking days, weeks, even months to create.

"Our technique was actually brought from Sierra Leone," seventh-generation basket weaver Michael Smalls told ABC News. Smalls learned how to make baskets from his great grandmother. Now he and his business partner and one-time apprentice, Dino Badger, spend much of their time on Hilton Head Island sowing and educating to help preserve.

"It's our job as ambassadors of these baskets, of our culture, to be able to represent and present it in a wholesome way to where it's effective," said Badger.

Baskets made of bulrush -- a tough marsh grass -- were important tools on rice plantations. Over generations, pine needles, palms and sweetgrass were added.

Badger says his ancestors used whatever they could to make something so useful. "And I try to apply that to my everyday life. That sometimes you are dealt with not such a good hand but you make it work."

From agricultural tools to decorative items, the signature baskets which can last a lifetime are now one of the most sought-after products in the world. The prices range from just a few dollars to hundreds or thousands of dollars.

In Charleston's historic city market -- displaying all types of baskets known for their natural sweetgrass aroma -- generations of Gullah people have set up shop including longtime basket weaver Tonya Aiken.

"You got people coming from all around that want to come to the Charleston City Market to see these baskets, pick them up, smell them and take them back with them," said Aiken. She says the pandemic hurt but it also helped her business. "When we opened back up, the town was flooded with tourists. They were coming. They were definitely buying." 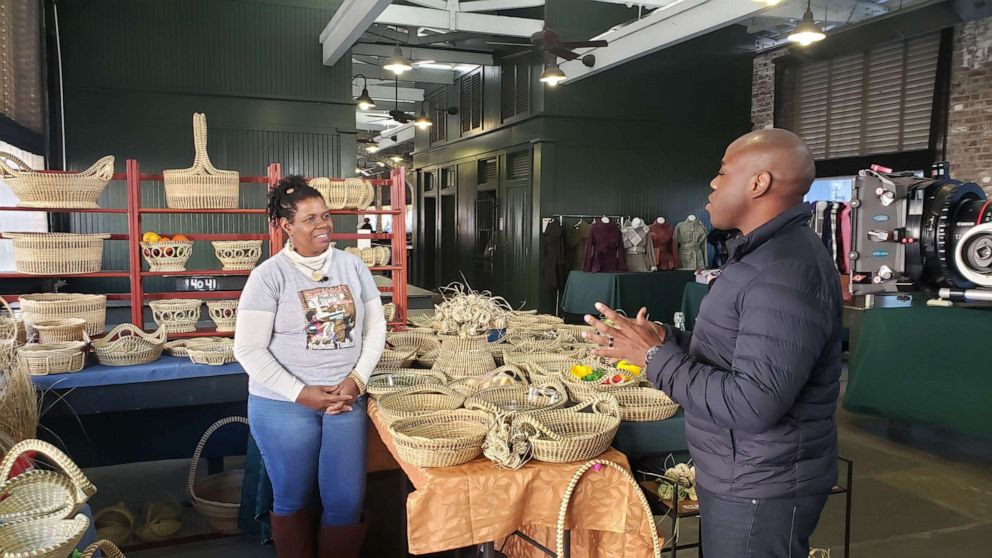 There are concerns among Gullah basket makers. Today, because of development and gated communities, those precious materials are a little harder to find, they say.

"Where the sweetgrass was growing, those places aren't available anymore," said Cayetano-Jefferson. "So what I want to start is an initiative to have basket weavers grow sweetgrass in their own yards."

Today's makers say it will take the next generation to keep this Gullah tradition alive. Cayetano-Jefferson's 19-year-old daughter Chelsea has the skills and says she has been weaving baskets since she was a little girl.

"I definitely feel like basket weaving will be in my life forever," Chelsea told ABC News. "I'm not going to say I'm a master at sweetgrass basket weaving either. But learning my culture definitely helped me learn more about weaving."

And there's an immense pride knowing the beautiful baskets are woven into the history of America. Smalls said when he thinks about the basket weaving link to West Africa, it makes him proud of his heritage.

"Knowing that our ancestors were able to create such beautiful things, even in the harshness of how they were treated on the plantations. But through all of that, they were still able to continue their culture," he said.