If you have Instagram or Facebook, you've likely run into advertisements on your social media feed for everything from beauty products and clothing to household items from small boutiques.

Sometimes, sellers promise a lot at low prices, but for many consumers, it's hard to tell if those items are worth the buy.

Still, with branding and unbeatable prices, it's often tempting to purchase those products and see for yourself.

In October, the Federal Trade Commission revealed an increase in complaints from people who say they lost money purchasing items through some social media ads. The spike in complaints happened at the height of the COVID-19 pandemic, according to the FTC.

MORE: A website gathering info on 'almost everyone in America' says a poor reputation score could hurt you

In addition, the Better Business Bureau has warned against some products advertised in social media feeds from online boutiques.

"You might see something in your news feed that looks terrific," Katherine Hutt, a spokesperson for the Better Business Bureau, told "Good Morning America" in March. "Sometimes, it'll look great in the ad and look terrible once you get it."

One of the major shopping categories growing its presence on social media is intimate apparel, specifically bras, experts say.

"My audience, a lot of them are discovering new brands through Instagram advertising in particular," said Cora Harrington, editor-in-chief of The Lingerie Addict," which Harrington describes as "the world's largest lingerie blog." "Customers want more variety and diversity with model, and that's why influencer marketing has taken off.”

"GMA" ordered four bras from companies that advertise on social media -- Honeylove, Savage X Fenty, ThirdLove and Cuup -- and partnered with Good Housekeeping Institute to test out the bras. 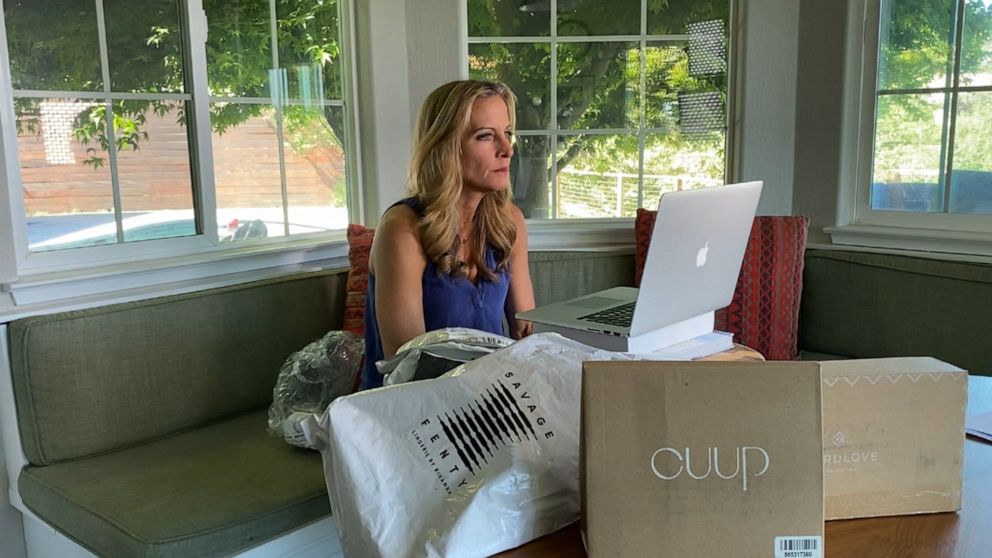 ABC
ABC News' Becky Worley is pictured surrounded by packages from intimate apparel companies with a presence on social media.

“We looked at what we call t-shirt or everyday bra, something that is your go-to bra that you can wear out and about under most of your outfits, as well as just wearing it at home," explained Lexie Sachs, Good Housekeeping's textiles director, who also noted the bras were tested on real bodies as well as in the Good Housekeeping lab.

Sachs washed the bras five times to see if they hold up in laundering. All four of the bras passed.

Next, Sachs performed what she calls a "stretch recovery test" to see if the bands that go around the body keep their shape after being worn.

All the bras had acceptable results, with Cuup's bra getting a perfect score.

Savage X Fenty, the least expensive bra tested, was described by Sachs as being both a good fashion pick and good for people who prefer a more rounded shape "because of the padding and the lift.”

Sachs described ThirdLove's bra as, "great for anyone that has a smaller bust and is looking for some lift."

She also commended the bra for being "super soft."

Honeylove's bra was described by Sachs as providing more coverage with its different style.

"It's a pullover style," she said. "It has no adjustable, no pesky clasps and a lot more coverage than the others.”

Overall, the bras had different strengths and no one bra purchased through social media failed the Good Housekeeping evaluation.

“It's important not to get so tied up and being told what you're supposed to be buying, especially when you're getting so targeted with these social media ads," said Sachs. "Make sure you're buying something that's right for you.”

Earlier this year, Worley tested clothing sites based on several social media ads, including sites with complaints filed with the BBB, like Funnydressing.

One person who says she was disappointed with her purchase was Kyla Nardini, who saw a Facebook ad for a rainbow-colored bed set from Funnydressing. She told "GMA" she ordered a queen blanket set and four pillow cases as well as a set for her friend. In total, she spent over $120, but when it was finally delivered, it wasn't what she was expecting.

"The pictures on the website, they did not match up with what I received at all," said Nardini. "What I did receive was a throw blanket. And I also received a small decorative pillowcase that does not fit a bed pillow whatsoever."

In February, the BBB opened an investigation into Funnydressing due to the amount of complaints from customers alleging that they didn't receive the items they paid for or were disappointed with what they received. Some of those complaints included not being able to receive details on their orders or refunds, the BBB says.

MORE: 3 tips to avoid puppy scams during the pandemic, according to Better Business Bureau investigator

Security expert Theresa Payton helped analyze the sites Worley ordered from by looking up company names on the website ICANN.org, which will tell you how long the site has been up. Payton said it's a red flag if a site has a newly registered name.

"Think about it like when you used to go to the store," said Payton. "Often [with] this impulse buying, things would be right in front of that cash register. These [ads] are designed to do the same thing."

For Funnydressing, Payton found that the website wasn't registered until October 2020. However, the website claimed to be a family owned, Paris-based establishment that had been around for 10 years.

As for the quality of the bed set, Jackie Reeve, a bedding expert from the site Wirecutter, said the product was not worth the price.

"I wouldn't pay $20. And we've tested $20 blankets that are significantly nicer than this one," Reeve said after examining the Funnydressing bedspread. "They haven't used enough material to really fill this in. It's not warm at all and just looks cheap."

Of the products that were advertised and purchased from online boutiques, nine of them received a thumbs down from Wirecutter experts. Funnydressing did not respond to ABC News' request for comment.

When it comes to clothing, the BBB says it receives some of the top complaints from customers who purchase apparel from boutiques that are advertised on social media.

"You might see something in your news feed that looks terrific," said Hutt. "Sometimes it'll look great in the ad and look terrible once you get it."

In addition, the FTC found that most of the complaints filed by consumers said they found the ads on Facebook or Instagram.

Worley purchased six clothing items from several online boutiques to see for herself, including a blouse from a site called ZOLUCKY that claimed to offer "high quality and exclusive fashion products from independent designers."

However, when it was delivered, Worley said she had a similar experience to the bed set purchase.

"It looked [in the ad] like something like a fine Italian knit, like the designer Missoni," said Worley. "But when I got it, it's polyester, it has white stitching." 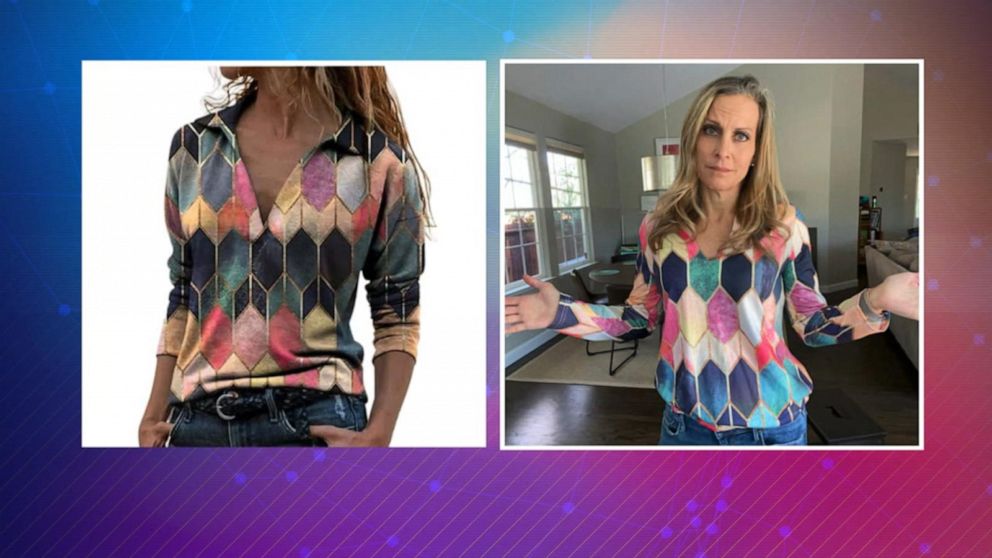 Other pieces Worley purchased included women's cashmere sweaters retailing at more than $100 each from two other sites. But like the blouse from ZOLUCKY, an expert told ABC News it wasn't worth the money.

"For a hundred bucks, you could do a lot better," said Jenn Hunter, apparel editor at Wirecutter, who examined the items Worley purchased. "One was extremely thin. I wouldn't expect it to keep you warm at all. The other cashmere sweater, I was really disappointed. When I put it on my hands, [it] almost felt greasy. That can often indicate that the manufacturer has used softeners. But those will wash out in time and then you'll wind up with something that doesn't feel luxurious at all."

While Nardini got her money back through her credit card company for the bed set, and Worley was offered a refund from ZOLUCKY and offered another product from one of the sweater vendors, experts say be cautious when purchasing through social media ads.

"I would be very careful spending money through these ads," said Hunter. "Marketers know how to phrase their language so it sounds appealing. And they often don't deliver in my experience."

While there are a lot of big-name brands and reputable small businesses selling high-quality goods on social media, experts say there is also misrepresentation and poor customer service that can be found on our social feeds.

Here are some additional tips before spending money on products you see on social media.

1. Skepticism should be your starting point if it's a brand you don't know.

2. Read the product descriptions carefully. If the price is too good to be true, there's a reason for that.

3. Do an image search. If the picture of the clothing item is listed for sale on other sites, that's one way to figure out if it's a knockoff of a more well-known brand.

4. Check the return policies. For clothes and bras, you want to be able to order multiple items to try on and return any that don't fit without paying more for return shipping.