And to celebrate, their classmates made more noise than you would ever expect for competitors in a chess tournament -- at a pep rally. 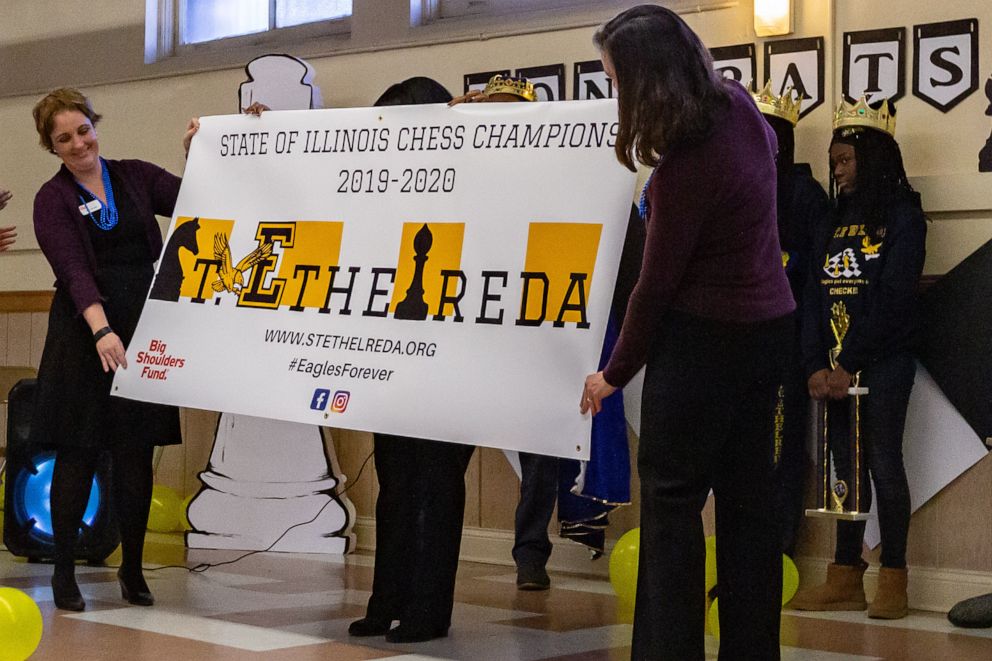 Denise Duriga
St. Ethelreda School is presented with a banner as state champions in chess during their pep rally.

With families and friends alike, Shakira Luster, 13, Trechelle Williams, 14, and Imani Hill, 14, ruled the halls of St. Ethelreda School, on the South Side of Chicago.

Together, they took the third, fourth and 10th places at November's Illinois State All Grade Chess Championship.

"The pep rally was very empowering because we could see how our fellow classmates are looking up to us, believing in us and celebrating us for winning," Imani said in excitement.

While this deserved win was more than enough reason to celebrate, chess holds a special place in the experiences for the students at St. Ethelreda School. 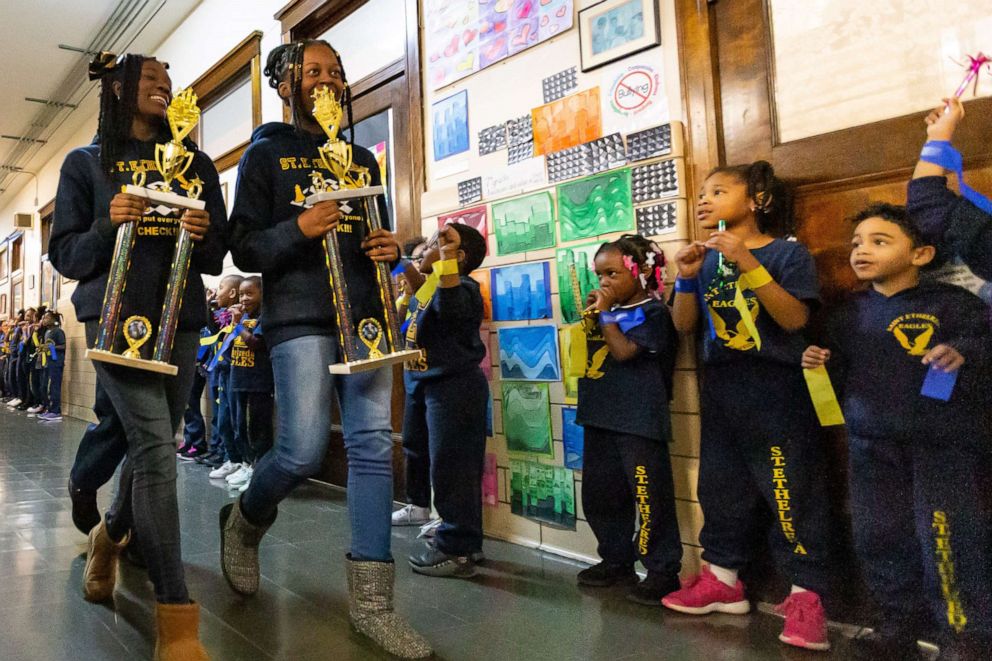 Eric Luster, the chess coach and a math teacher at St. Ethelreda, as well as Shakira's father, has a longtime love of the game.

"As a casual chess player myself -- and looking at the research on how chess can help improve students' math scores -- I wanted to create a chess team here at the school," Luster told ABC News. "We've been playing chess here for over seven years now, and we have definitely seen an improvement in math scores and an overall growth in academic performance, particularly for the students who participated in the team."

In those past seven years, the chess team has grown to become a source of community and fun for students.

"There is something about being a member of the chess team here. You might not be an athlete, you might not be the smartest kid in the classroom, but you're still on the team," said Dr. Denise Spells, principal of St. Ethelreda School. "You get on the bus to go to your tournaments. You come in your T-shirts ready to play. We, as a school, win a trophy and everybody is happy. It's our own little community."

Although St. Ethelreda School has collected a fair amount of trophies, these state wins have been historic. 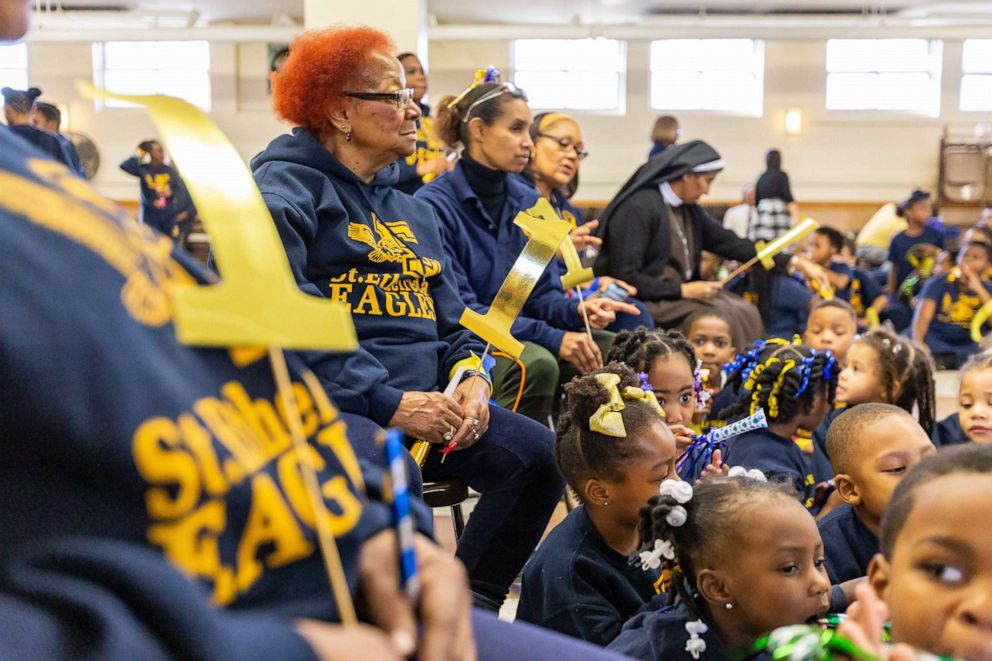 Denise Duriga
Family, friends, and community members cheer on the students of St. Ethelreda School during their pep rally.

(MORE: A new computer program taught itself how to play chess, go and shogi)

"We always thought we were the best eighth grade team, but when we actually won, it felt empowering to know that we made history," Trechelle said.

Spells wanted to do something big for the girls to show them how proud the entire school was of them, she said. As Shakira, Trechelle and Imani walked through the hallways of St. Ethelreda School, they were crowned alongside Luster, their coach, to make them feel like kings and queens of the school. 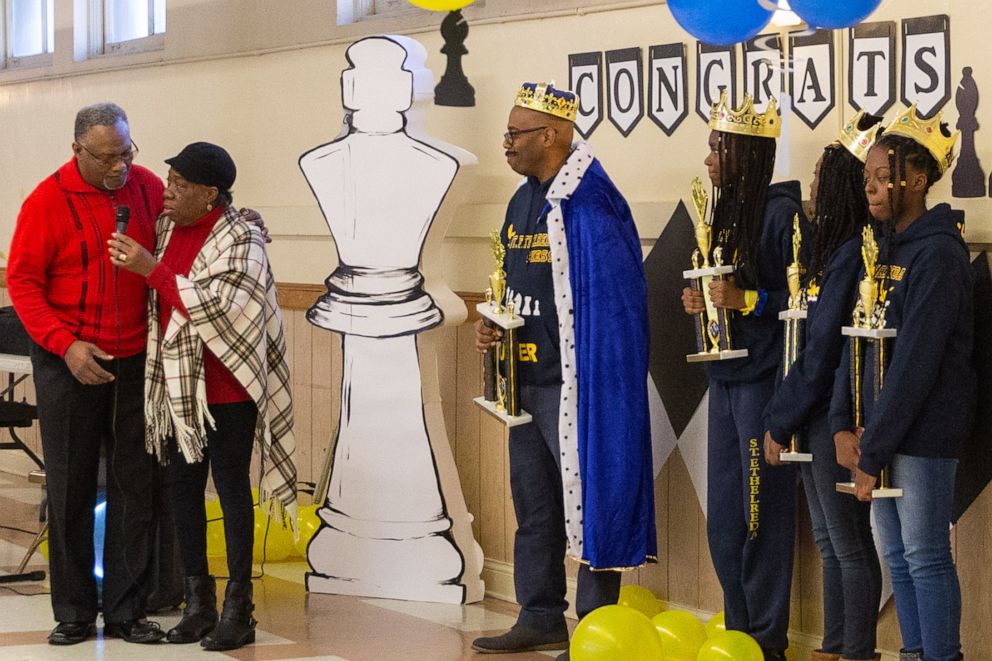 Denise Duriga
Coach Luster and the three winners of the Illinois Chess Championship are celebrated at the school's pep rally.

"Because the chessboard is ruled by the king, and the most important piece is the queen, they decided to crown us at the pep rally -- which surprised us because we were not expecting it," Luster said.

Winning at the state championships, in many ways, is really just the beginning for these girls.

"Being on the chess team means a lot to me because it has helped out with my math and test scores a lot," Shakira said. "So the more I play chess, the more I feel like my scores are going up."

And to that, checkmate.