By Nicole Pelletiere, Genevieve Shaw Brown, Chris Cirillo
Share —
Sign up for our newsletters to get GMA delivered to your inbox every morning!

We all have that one school teacher that holds a special place in our hearts.

In honor of Teacher Appreciation Week, here are some moments where educators inspired by going above and beyond for their kids.

Olivarez, an educator at Copperfield Elementary School in Texas, sparked dreams of higher education when she asked universities across the nation to donate college T-shirts to her students. 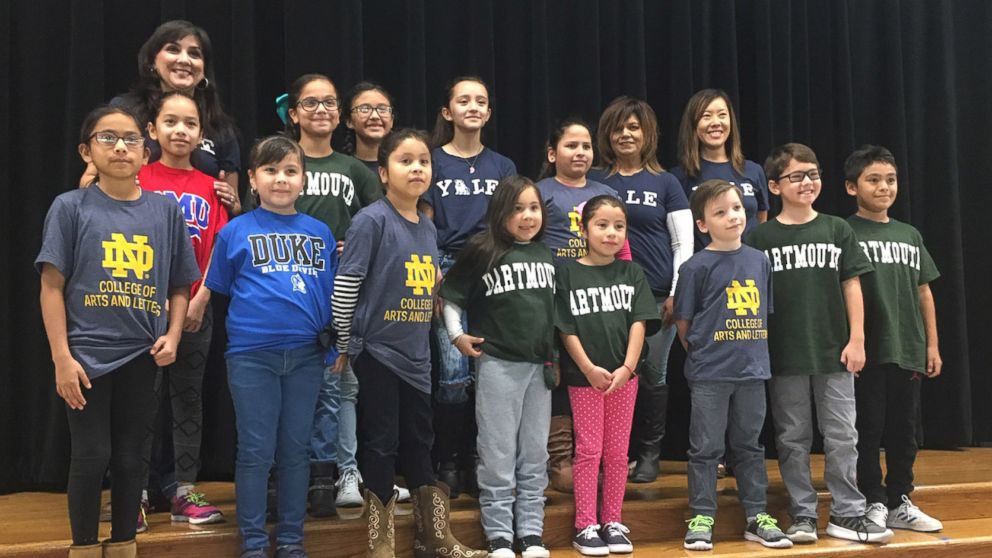 The entire school now rocks their tees each week during "College Shirt Wednesdays."

"I want [the students] to know that the possibility of getting into college is there," Olivarez said. "Nothing should hold them back of their dreams."

Erin Castillo, an English and peer counseling teacher who created a viral mental health check-in chart for her students

Castillo, an educator at John F. Kennedy High School in Fremont, California, inspired teachers around the world when she gave her students a safe place to share their feelings. 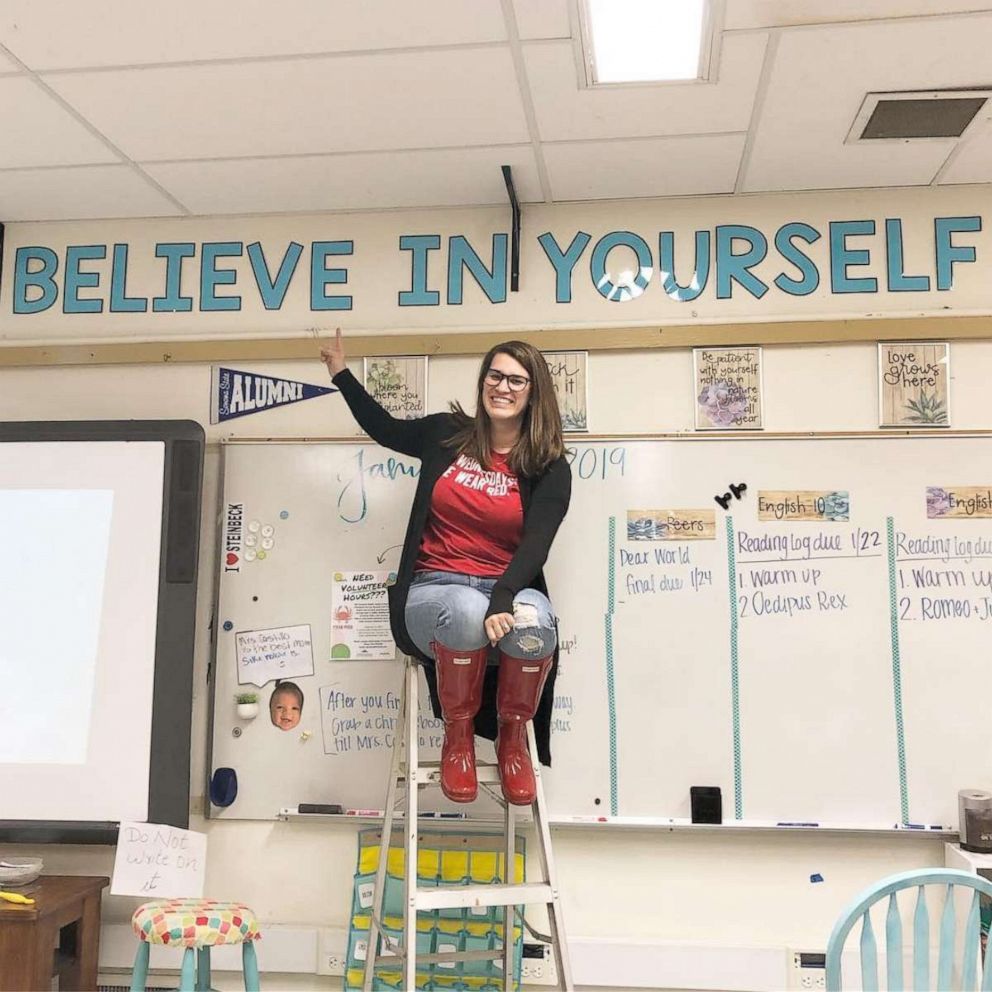 Castillo shared her mental health check-in chart on Instagram and soon, teachers around the globe soon made their own versions of the chart for their classrooms.

When using the check-in chart, students are encouraged to grab a post-it, write their name on the back and place it next to the statement that best matches their feelings for the day. Two of the statements merit a check-in with Castillo and a follow-up conversation with the counselor or the school psychologist on campus.

"If it can help one student, then it'd be better than where we're at now," Castillo said. "I hope it gets to a place where we can talk about our struggles openly and our mental health. This looks like a step in the right direction."

She added, "To see this being used in multiple countries around the world, having [teachers] reach out from New Zealand and Africa...to hear actual stories of people helping their students, I'm really overwhelmed with joy."

Ranesa Shipman, the assistant principal who slayed the "Level Up" challenge at high school pep rally

Shipman brought the house down during a September pep rally as she nailed Ciara's "Level Up" challenge alongside Wilson Central High School's dance team. 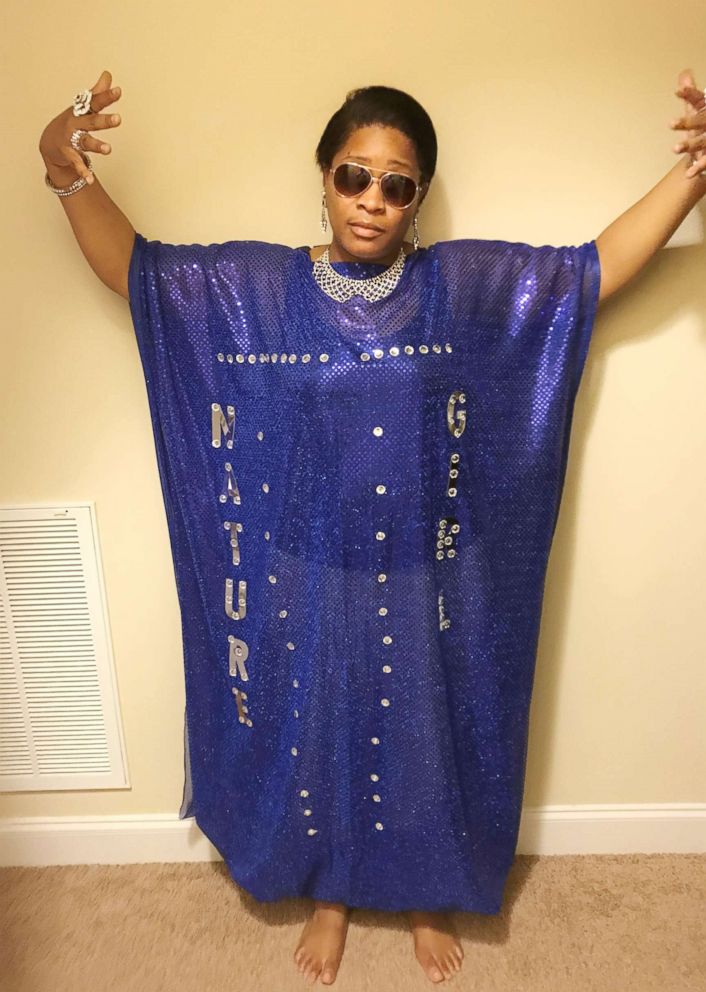 Shipman performed the viral dance inside the gymnasium in Lebanon, Tennessee, and the students totally lost it.

Even Ciara herself shared the video of the performance on her Twitter page.

"I will perform, do cartwheels and jump through fiery hoops," Shipman said, adding that she'll do anything for the kids. "If I am able to turn a bad day into a great day, I will do it."

Shannon Grimm, the kindergarten teacher who cut her own hair when her student was bullied for her shorter style

Grimm warmed our hearts when she cut her hair for her kindergarten student, Prisilla Perez, who was apparently being teased by classmates for her new haircut. 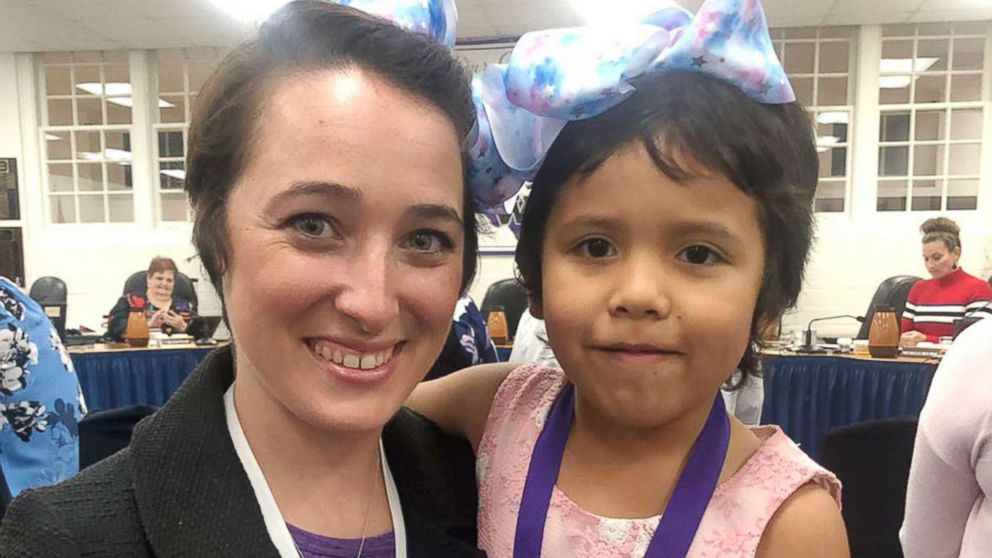 Courtesy Jamie Fails
Shannon Grimm, a second year kindergarten teacher at Meador Elementary School in Willis, Texas, cut her hair in January after kindergartner, Prisilla Perez, 5, was apparently being teased by classmates for her new haircut.

Grimm, a mom of three, told "GMA" she wanted to turn Prisilla tears into a teachable moment for the entire class.

So one day in January, she arrived at school with a new haircut that matched Prisilla's.

"I told Prisilla that I did it for her and I wanted to show her that it didn't matter if you had longer hair or shorter hair," Grimm said. "It matters what's inside and that she's a caring, silly girl."

Grimm later nominated Prisilla for student of the month on account of her strength and courage to continue coming to school despite being sad. Prisilla then presented Grimm with a medal for being her hero.

Andrew Olson, the teacher and coach who shocked his students with surprise return from Afghanistan

Olson, a captain in the Army National Guard who coaches basketball and football, surprised his athletes at their Northridge High School in Layton, Utah. 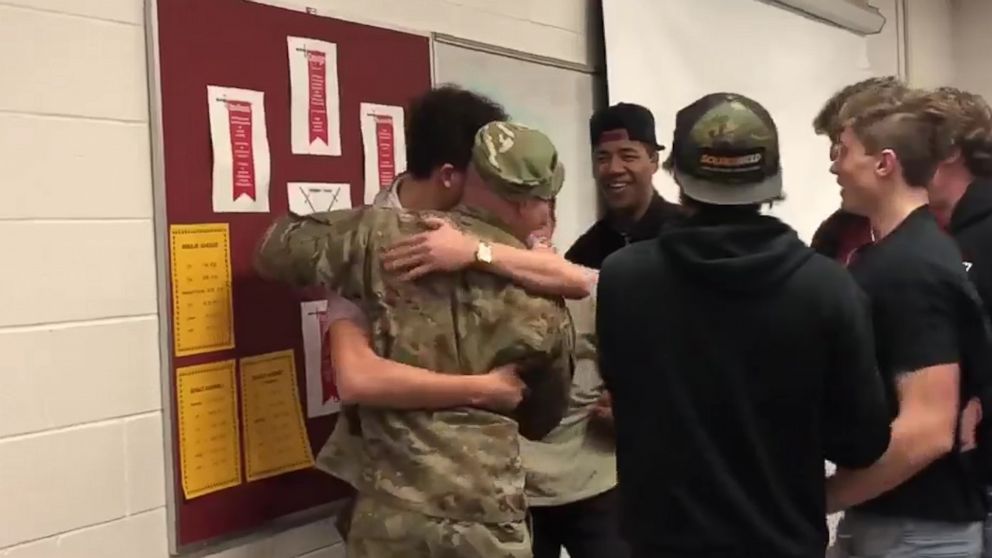 Tina Olson
Captain Andrew Olson is greeted by his student athletes when he surprised them at school.

The video showing a group of teens rushing to hug Olson was captured at the school. The kids were told they were going to have a guest speaker. But instead, they got Coach Olson.

One jumped into his arms. Another jumped clear over the table he was sitting at to get to him.

Aaron Tanner, one of the boys in the video, told "GMA" there was "a moment of disbelief."

"He's taught me so much about hard work and commitment, he showed that he really cared about my team and their success," Tanner said. "He set a great example by committing to serve our country."

Jonathan Oliver, the phys ed teacher who paused to fix his student's hair in gym class

Oliver was filmed as he paused in gym class to assist kindergartner Kristen Paulk at WG Nunn Elementary School in Valdosta. The sweet moment was shared on Facebook where it garnered 3 million views in January. 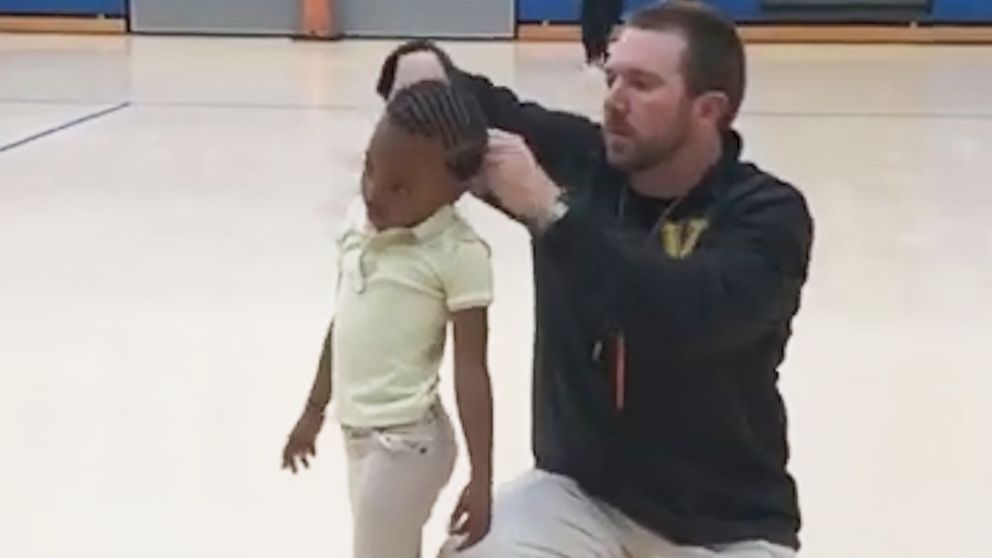 "It was shocking to me that it got that much attention because we all do it," Oliver, 34, told "GMA" in February, adding that he didn't realize he was being filmed. "To me, it was just a ponytail."

Oliver, a dad of three, said Kristen approached him asking to put a ponytail in her hair during a basketball activity.

Kristen's mom, Miyah Cleckley, told "GMA" that she was touched by the video.

"I always know that Kristen is in very good hands with him," Cleckley said of Oliver.

Steve Culbert, the elementary school teacher who accompanied his students to the father-daughter dance

Culbert of Davidson, Michigan, took Alivia Reece, 7, and Avery Reece, 8, to the daddy-daughter dance on Oct. 13, along with his own daughters, Aliyah Culbert, 6, and Hailey Culbert, 8.

Alivia and Avery's dad, Luke Reece, died Sept. 19 after a blood condition put him in cardiac arrest. He was 32-years-old. 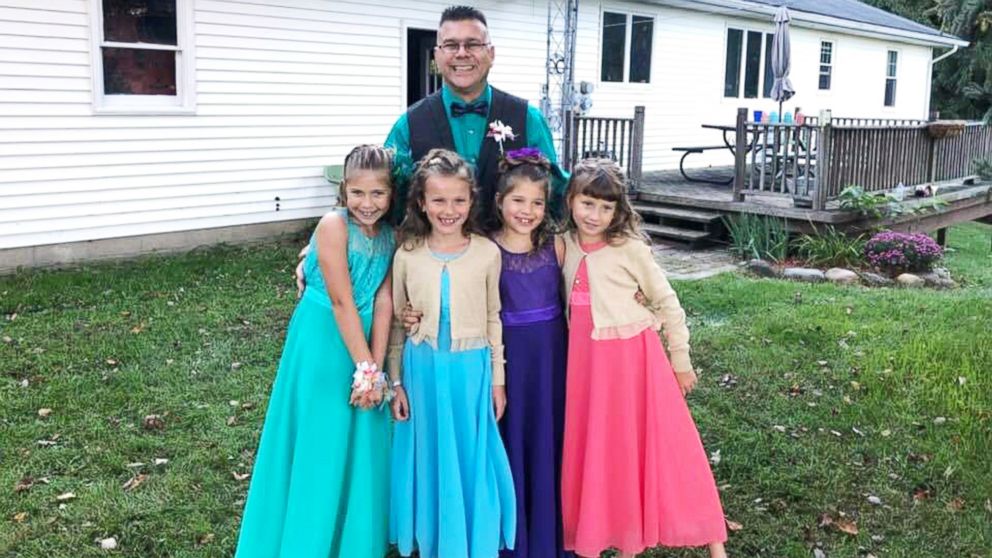 Steve Culbert
Steve Culbert, a teacher from Davidson, Michigan, escorted his former students Alivia Reece, 7 (in coral) and Avery Reece, 8 (in blue), to the father daughter dance along with his own daughters, Aliyah Culbert, 6 (in purple) and Hailey Culbert, 8 (in green).

For the dance, Culbert, who taught both girls in second grade, surprised the sisters with a stretch limo and a day of beauty. Members of the community bought the dresses for Avery and Alivia and Culbert's daughters, so the four of them could match in their favorite colors.

"I am forever grateful," Shelley Reece, the girls' mom told "GMA." "Having Avery come home that evening and tell me Mr. Culbert brought her smile back was all a mother could ask for."

Culbert said he hopes to help set up a college fund for Avery and Alivia.

Elisabeth Milich, the teacher who courageously revealed her salary online

Milich, a second grade teacher at Whispering Wind Academy in Phoenix, Arizona, disclosed her annual income on Facebook in hopes to spark change during the #RedforEd movement. 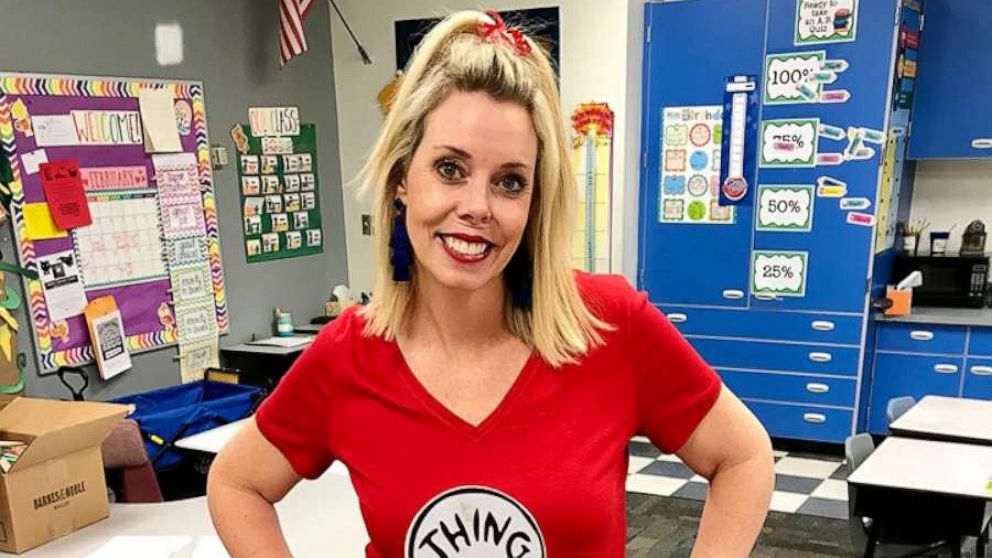 Thanks to Milich's candidness and Adam's generosity, several Arizona classrooms were adopted. Later, Adam launched a website, classroomgiving.org, to help other teachers who are in need of supplies.

LaShonda Carter, the high school teacher who babysat so her former student could attend a job fair

Carter came to the rescue of her former high school student Larresha Plummer of Chicago, when she watched her 1-year-old daughter. 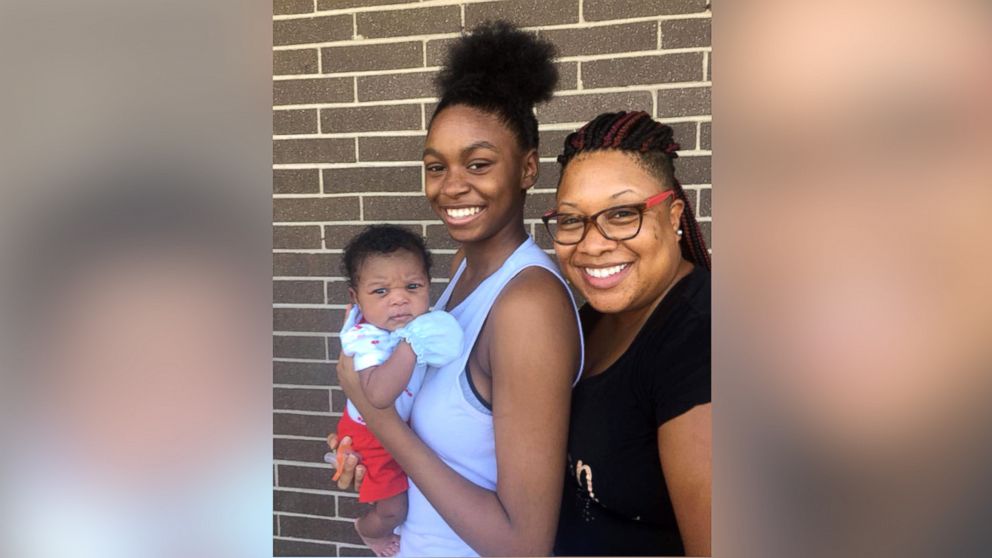 Plummer, who was entering her freshman year at Kennedy-King College, was hoping to land a part-time position to support her child. But she needed a babysitter to help find a job -- and that's when Carter stepped in.

Carter picked up Plummer and sat in the car with her daughter while she attended the job fair. She shared part of the event on Facebook Live. 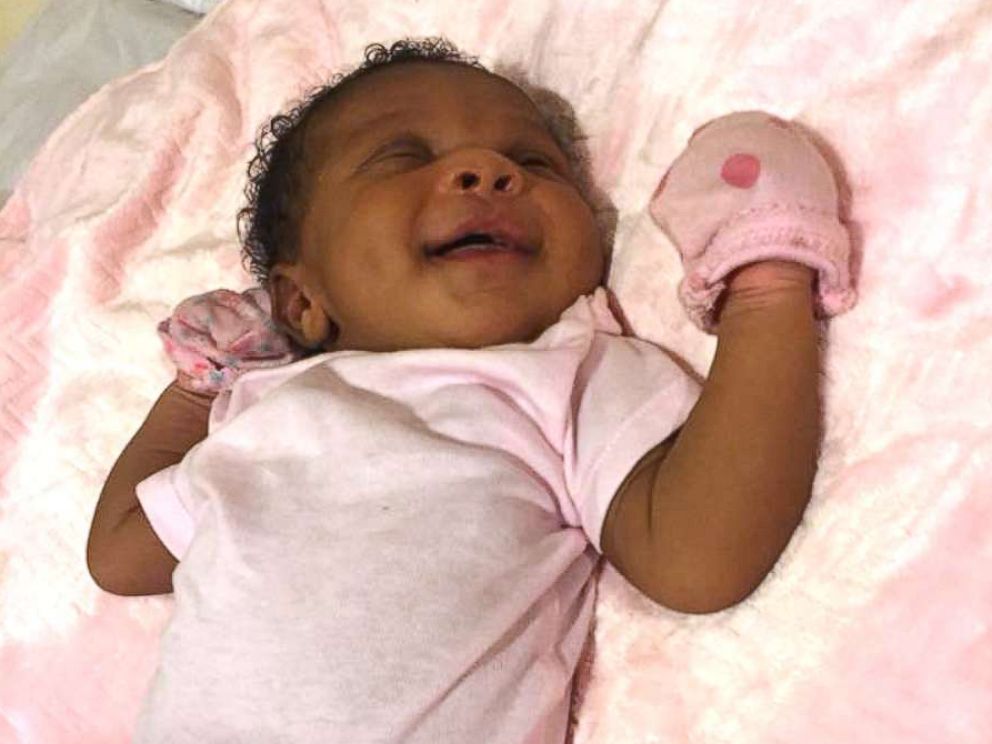 "I really hope I can do something for her [Carter] one day. I really do," a gracious Plummer told "GMA," after she had landed a job in retail. 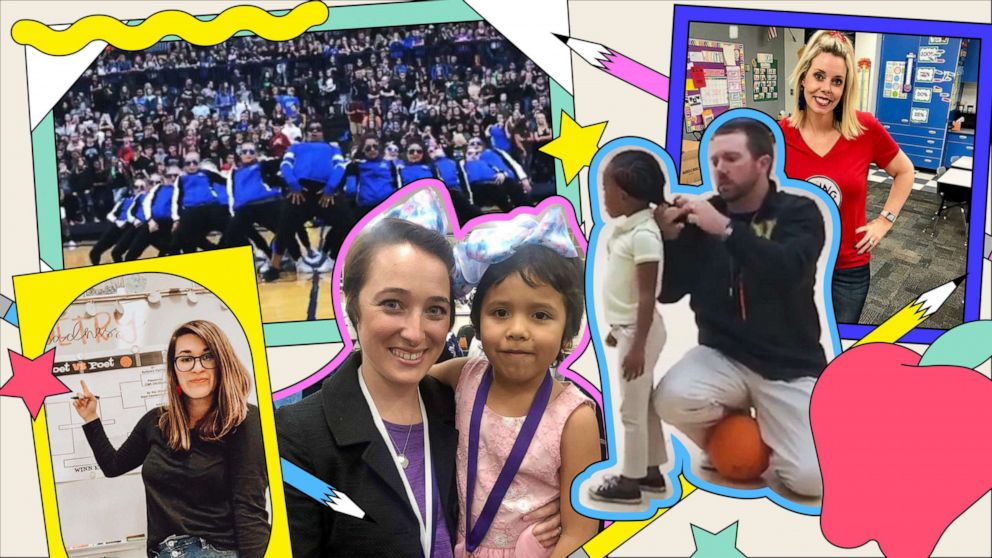