A retiring Michigan teacher received a standing ovation at a Grand Rapids high school on her last day of classes, an emotional moment that has since gone viral on TikTok.

Video of English teacher Sheridan Steelman's celebratory send-off has amassed over 6 million views and 1.2 million likes since it was posted on June 1.

The viral footage, a combination of two videos, features Steelman being greeted with cheers and applause from students and teachers alike, who form two long lines along Northview High School’s first floor, leading to the front doors. Steelman is seen reacting in surprise, wiping away tears, as Northview Principal Mark Thomas leads her toward the crowd. At one point, she offers the crowd a twirl, prompting smiles from the students.

Katherine Steelman, one of Steelman's six children, shared the TikTok on her own account.

"My mom has taught at this high school for 50 years," she wrote in the caption. "She was 22 when she started as an English teacher. Today was her last day. The entire school sent her off as she left the building one last time 🥺” 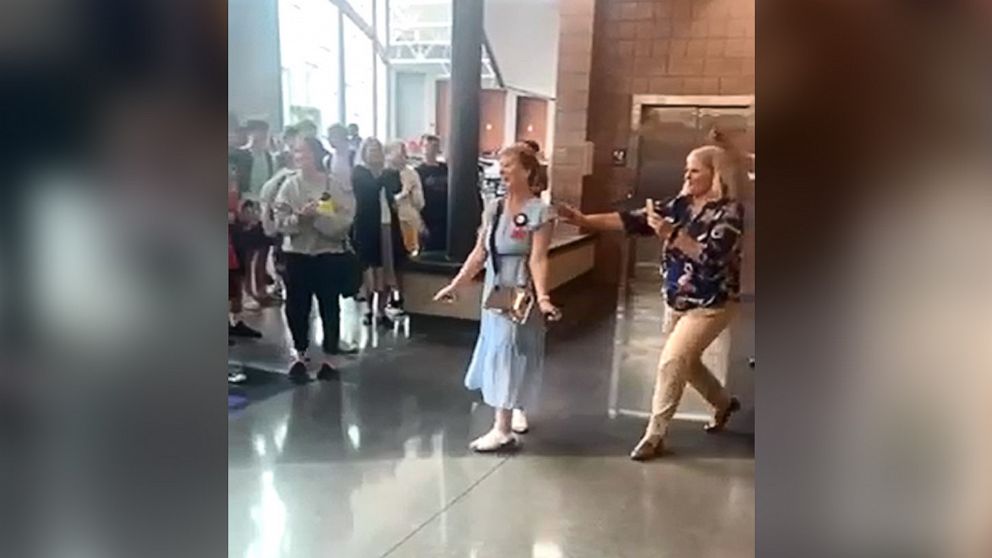 Derek Brooks
Sheridan Steelman, a high school English teacher, received a standing ovation from staff and students on her last day of school. Steelman retired from teaching this year after 50 years at Northview High School in Grand Rapids, Michigan.

Thomas, who has known Steelman for the last 24 years, since he himself started at Northview, was the mastermind behind the surprise and said he was "honored" when she asked him in advance to walk with her on June 1, her last day at work.

"In thinking about it, I literally couldn't do justice to it," he told "Good Morning America." "So I went around and got ahold of some other teachers and asked them and I kind of put this together and we were working together to get a bunch of students and teachers in the hallways, creating that tunnel, and she was not aware of it."

"Her 50th year was as good as or better than the previous 49," the principal said. "She never mailed it in a day in her life as an educator."

"I don't know if I've ever seen an educator just adjust and adapt to serve their students over the years, in order just to continue to promote learning," he added. "Some people can, in all phases of life, replicate what they've done and do that over time. Well, she constantly reviews her practices and constantly takes feedback from her students, and constantly looks at new innovations and best practices and she implements those in her classroom."

He recalled an example from "probably seven or eight years" earlier, when Steelman did away with her teacher's desk.

"I'm better when I can sit with my students and I can engage in the conversations and do the writing and do work with them," he remembered her saying.

Steelman told "GMA" she absolutely loved the job she'd held for the last five decades. The decision to retire was one she thought through purposefully. 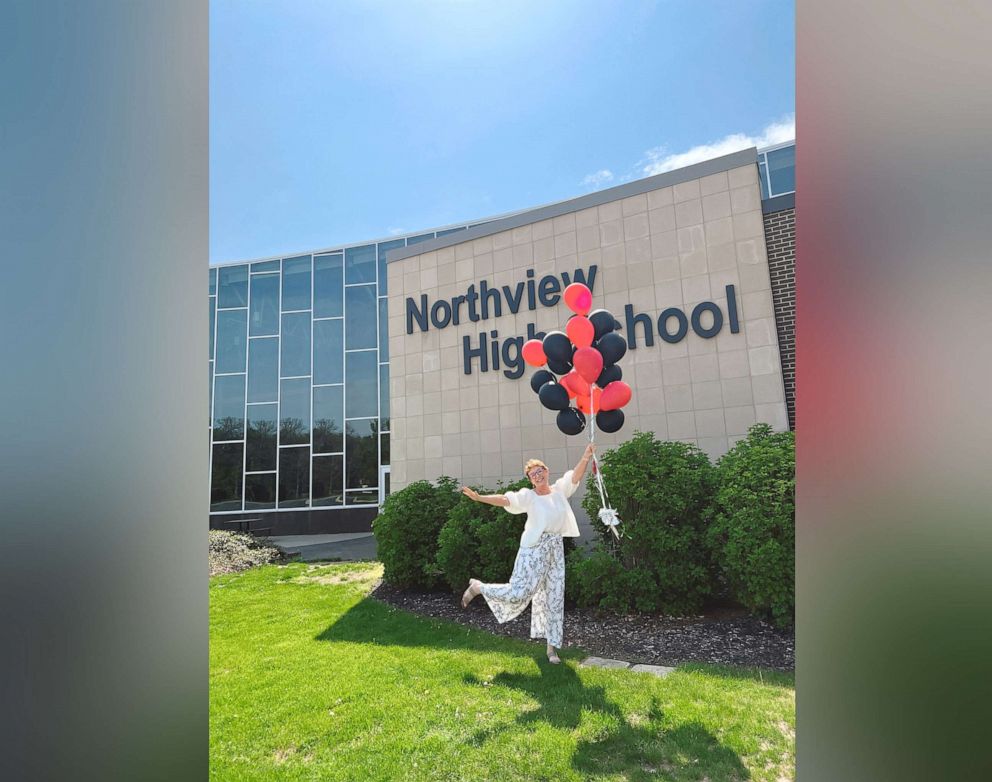 Katherine Steelman
Sheridan Steelman retired this year after 50 years as an English teacher at Northview High School in Grand Rapids, Mich. Steelman also taught French in the past but for the last decade, has mostly taught AP English Literature and AP English Language classes.
MORE: This teacher has life lessons for her students, and TikTok is loving it

"I thought it would be really cool to be able to go to 50 years but I didn't want to do it unless I was still really having fun and enjoying myself and was in good health and still learning a lot," Steelman, 72, said.

"I feel like I could have gone a lot longer," she continued. "But I also feel like it's time and even though they say, 'Well, were you ready?' No, but it's time. It's also time for those younger teachers to move up into leadership positions as department leader and curriculum teacher leader in the district."

Steelman also reflected on the impact of the pandemic on her career, saying that while some struggled with teaching, she felt "very blessed" by the experience.

"Teaching changed so much. We had to learn how to teach online. We got a new learning management system … and I was doing, basically, daily videos so that students would have the same lesson if they were home as they would have at school," she said. "I learned a lot and so I thought that was probably really good for me, and I guess that's me in a nutshell. I just have this insatiable thirst for knowledge and learning and trying to keep up with all the new things because education does change pretty quickly."

Asked what advice she would give to younger teachers coming up in the field, Steelman -- who has taught both high school English and French and, for the last decade, has focused on AP English Literature and AP English Language -- emphasized the importance of fun.

"Try to make sure that you have a balance and that you're taking care of yourself. But also, when you're there in the classroom, just have fun, be yourself and enjoy all those moments, because that's what the kids remember," she said. "They remember how they were treated as students and they remember that relationship that you had with them. They remember the funny things you talked about in class." 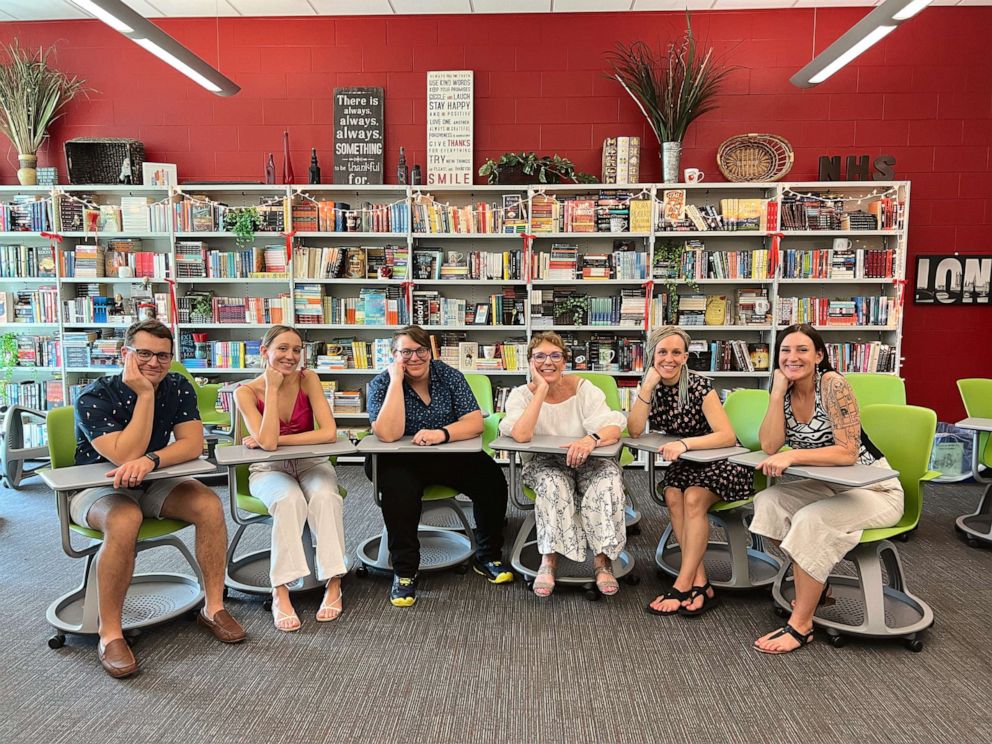 Stephanie Steelman
In addition to being a teacher, Steelman is also a mom to six children. Her kids, five of whom are pictured here with her, teamed up to coordinate a community celebration in honor of their mom at Northview High School.

Steelman said both the send-off and the ensuing online response has been extraordinary.

"The comments that I got, were so pro teaching," she said, calling them "heartwarming."

"It just amazes me still how just that one gesture, that one thing that someone does, sometimes, all of a sudden, it just has this huge impact … and sometimes you don't even find out until years later, but it's just those small moments, those small kindnesses that people do that means so much."

As her retirement kicks off, Steelman hopes to travel -- and later this year, she’ll release a book based on her dissertation, titled, "16th Century Shakespeare and 21st Century Students."