Two teachers from Georgia "tapped in" to welcome students back to the new normal of online learning amid the ongoing pandemic with a rap video that has quickly captured everyone's attention on the internet.

Audrianna Williams and Callie Evans showed off their impressive rapping and dance skills with original lyrics set to the tune of Jack Harlow's "What's Poppin'" to get students excited about the start of this unique school year.

The music video of the two Monroe Comprehensive High School teachers from Albany, Georgia, which was shot and edited by Jamel Overstreet, has garnered nearly 300,000 views on Instagram and captured the attention of the artist who rapped the original verse. 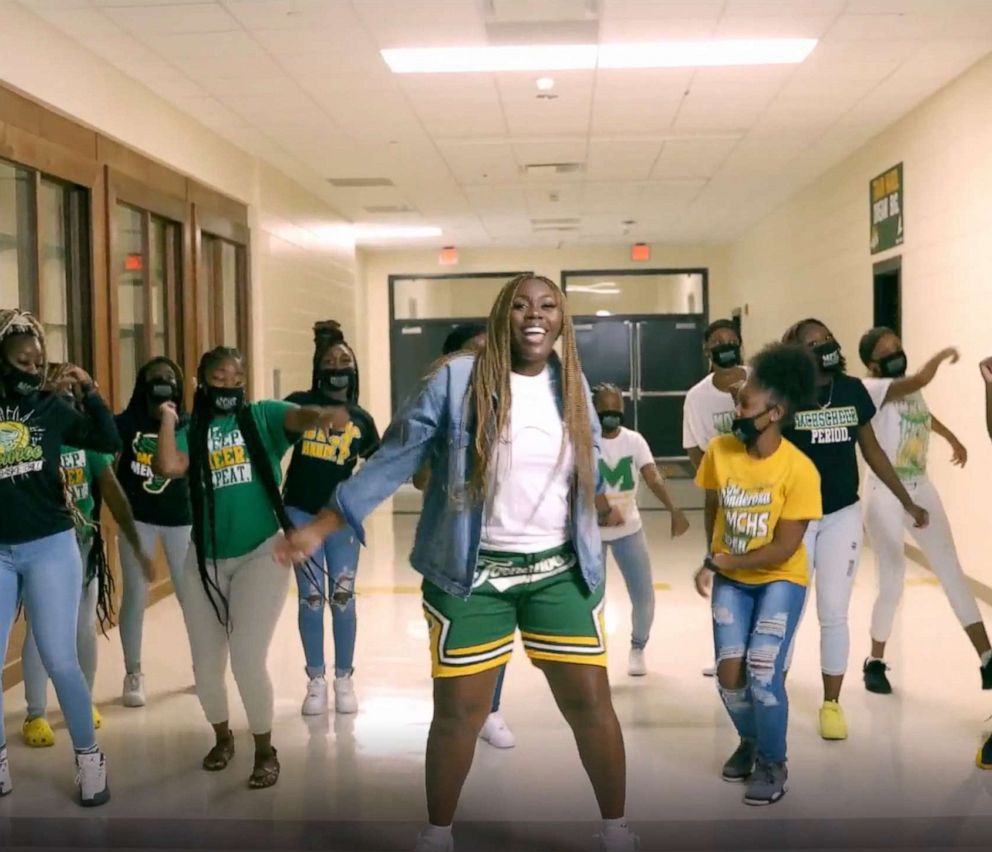 "I can't even tell y'all how amazing you are," Harlow told Williams and Evans over a surprise live video introduction on "Good Morning America" Thursday. "Thank you for making my song better you killed it -- I love you guys."

Williams and Evans, who were visibly stunned to meet the man behind the music, said they were amazed by the reaction to their now-viral video.

"It's a total big shock," Williams told ABC News. "I cannot believe the responses and the feedback and all the social media outlets that have posted us. It is mind-blowing."

Harlow also hailed the pair of educators for their creativity and the work they do for their students.

"I grew up with teachers that had a huge influence on me my whole life and it stuck with me so what y'all provide to society is invaluable," he told Williams and Evans. "I can't thank you enough for doing the job you guys do, so just as a small token of my appreciation I wanted to give both of you two thousand dollar gift cards to treat yourselves to whatever you want. I really appreciate y'all doing what you do."

"That's amazing," Williams said. "Thank you so much," Evans added with a laugh and a huge smile.

Producing a hit amid the pandemic

Overstreet told ABC News that directing the two creative teachers "was very fun -- It's very catchy and it's very different. It was a privilege to work with them. They're every videographer's dream, to work with someone that's going to make your job easy and you just have to worry about doing the camera."

"I knew that it was going to get a lot of attention in the community and where we are locally -- but I didn't know it would get this big on a national level," he said. 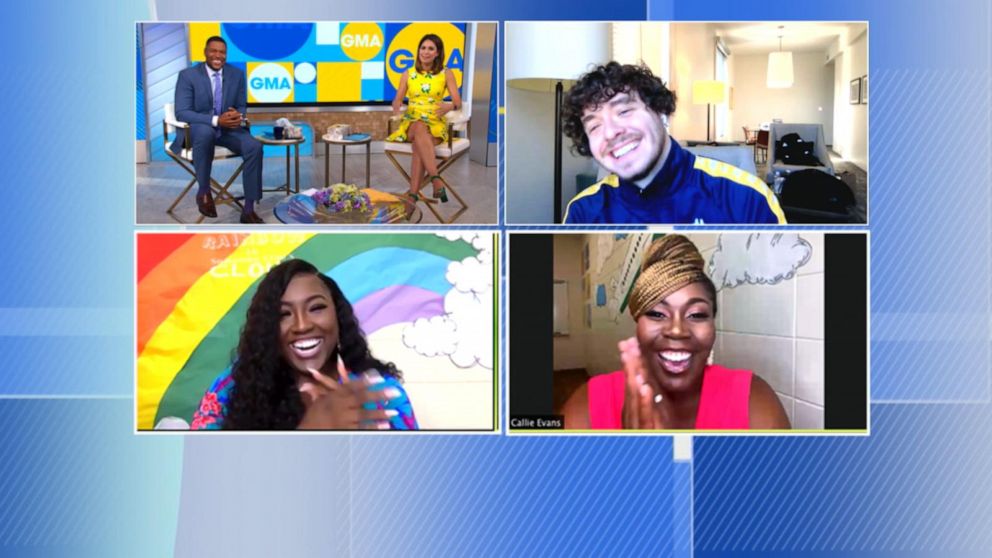 ABC News
Jack Harlow surprised Audrianna Williams and Callie Evans live on "GMA" to chat about their back to school rap.

The professional photographer and videographer said he had been wanting to work with the pair of teachers after seeing their past creative songs, so when Audrianna and Callie shared the timely song lyrics about learning amid COVID-19, he told them, "this is nice -- of course I like this."

"I thought the hallway spoke more to the whole scholastic feel," Overstreet explained about how they chose the location for the shoot on Aug. 11.

The teachers and cheer coaches had a handful of their school's cheer squad members as backup dancers, donning their best facial coverings and busting out trendy moves for the song which has been making the rounds on TikTok. 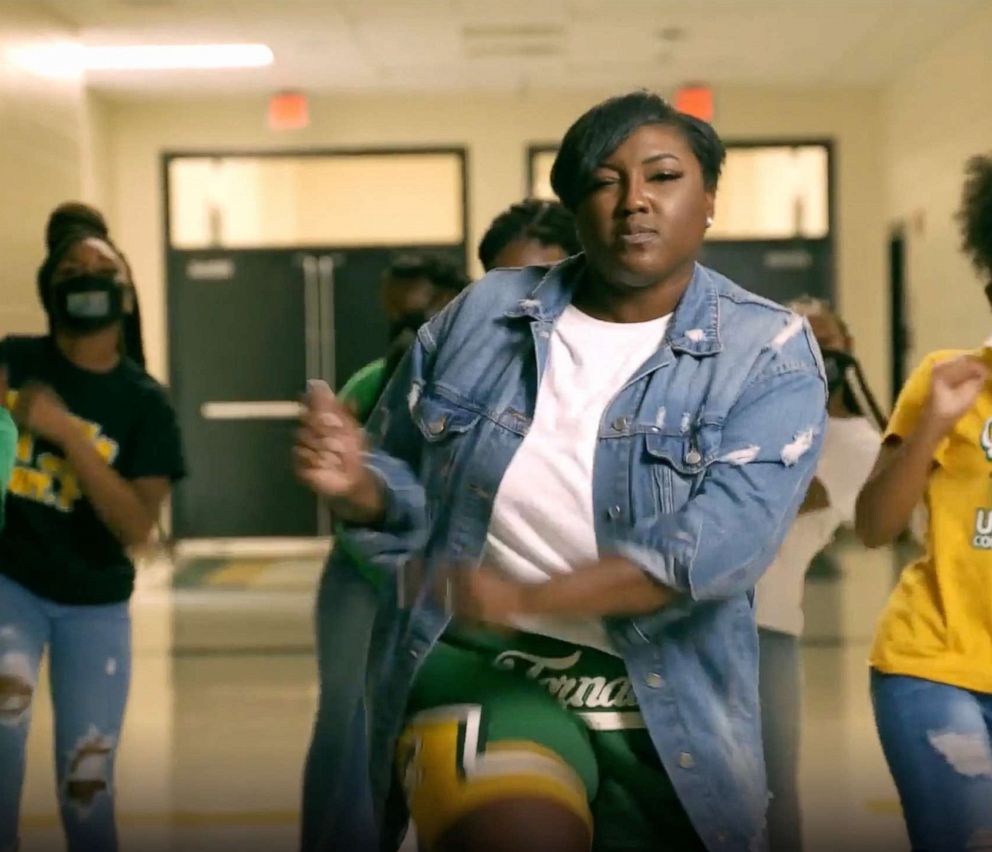 "They have worked with these girls for a number of years and they are all used to performing together," LaKisha Bruce, the school district's director of community relations told ABC News.

"We did everything, it probably took us an hour and fifteen minutes to film the whole thing," Overstreet said.

Overstreet presented the final edited video to the educators on Sunday so that they could get it posted before the school year kicked off on Monday, Aug. 17.

Bruce said that the pair developed this original video concept together and "changed the lyrics to encourage our students to get excited about the school year and virtual learning."

The dynamic duo have teamed up for other end-of-school year videos shot on iPhones over the last three years. 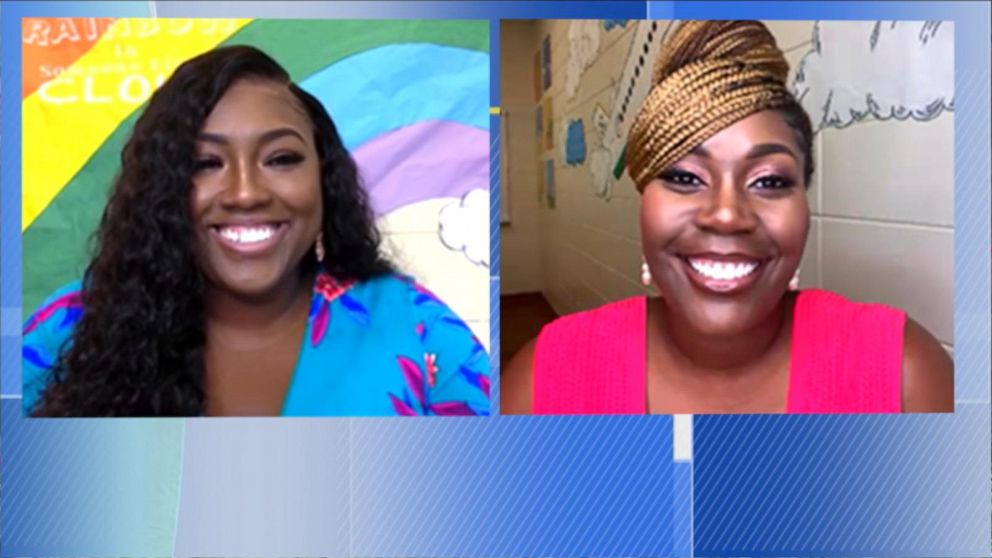 ABC News
Audrianna Williams and Callie Evans appear on "GMA" to talk about their back to school rap music video.

Williams said she first came up with the idea to make an end of the year rap after her first year of teaching four years ago.

"I wanted to kind of keep the rap going to keep the morale of the school up, so I asked Ms. Evans if she could join me in the next year school's rap and she was down and from that, it was history," Williams said.

The state of Georgia has been hard hit by the ongoing outbreak and spread of COVID-19 in recent months and despite more than 200,00 reported cases, with nearly 5,000 deaths, many schools across the state have returned for in-person instruction.

"Becayse Albany was impacted dramatically because of COVID-19, we wanted to basically just motivate, not only our students, our teachers but our community," Evans told "Good Morning America." "We have a lot of people that lost their lives and I'm sure the students were discouraged to even come to school in those circumstances, so we wanted to just show them how important it is to overcome adversity, to push through no matter what and no matter where you're from you can always be motivated and take it to the top."

Williams added that they both needed the encouragement, "just as much as the students."

"We were number three in cases in the world back in March to April," Bruce explained. "So a lot of their students were impacted by family members being terribly ill and even transitioning in death."

With their school district starting at 100% online, Bruce said "a lot of students and teachers are nervous about what that would mean."

"This video was created to calm the fears and nerves of all involved and encourage them to strive for excellence this school term regardless of the online instructional model that we are in," she said.

Both teachers were back in the classroom executing their virtual learning plans for online instruction at the time of publication and were unable to respond to ABC News' request for comment.

The Dougherty County School District's Responsible Restart Plan initially gave parents the choice of on-campus or online learning for their children, but Bruce explained "the plan is conditions-based so in the event that we had another spike of COVID-19 cases we would shift to fully online instruction to keep employees and students safe."

Their district decided to begin school in the online instructional model with rolling start dates and has a 1:1 technology ratio that provides its students in need with a device.

"Any family that does not have internet service in their home to support online instruction can get a WiFi hotspot device to support their needs. Each school is distributing devices in a drive-thru manner and following all of our safety protocols," Bruce added.