A group of Iowa teachers have sent their own mock obituaries to their governor in hopes she'll revisit plans for reopening schools.

"I'm very scared," 7th grade teacher Kerry Finley of Iowa City told "Good Morning America." "Are we going to wear scrubs? Are they going to amend the dress code? If we are going to do this, we are going to have to do this the way the hospitals did. We need training. We can't just say, 'OK, go back.'"

Finley is one of several educators who wrote their obituaries after art teacher Jeremy Dumkrieger shared his own obit with the local news blog, Iowa Starting Line.

In the article, Dumkrieger calls on teachers to email their obits to the office of Gov. Kimberly Reynolds. 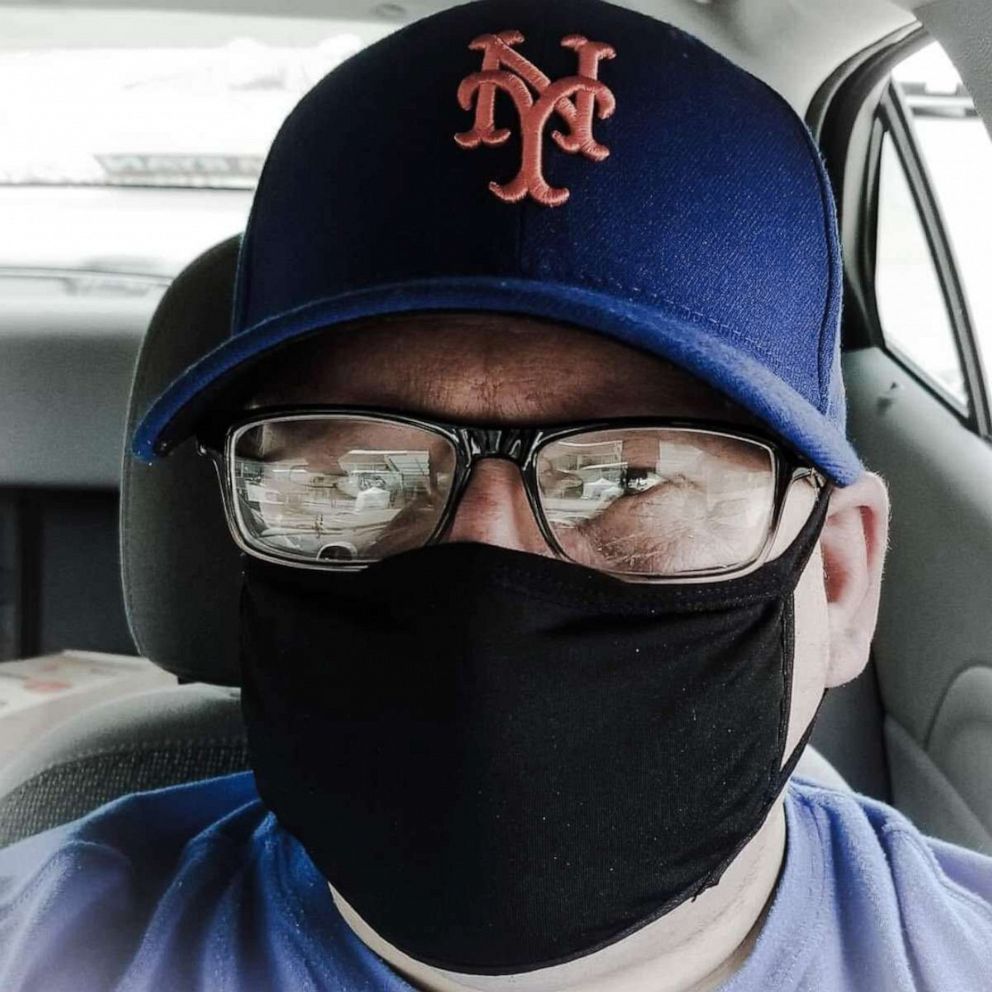 Jeremy Dumkrieger
Jeremy Dumkrieger, an art teacher from Iowa, wrote his own mock obituary and sent to Iowa Gov. Kimberly Reynolds in protest of the state's reopening plans of schools amid the novel coronavirus pandemic.

"I think what we were trying to do is humanize us in her mind, make her see us as people," Finley said.

Some schools, like where Dumkrieger teaches, plan to reopen in late August with specific dates varying from school to school.

"The governor issued no guidance," Dumkrieger told "GMA." "That means every district in Iowa will have completely different plans. Some will wear masks, some will not." 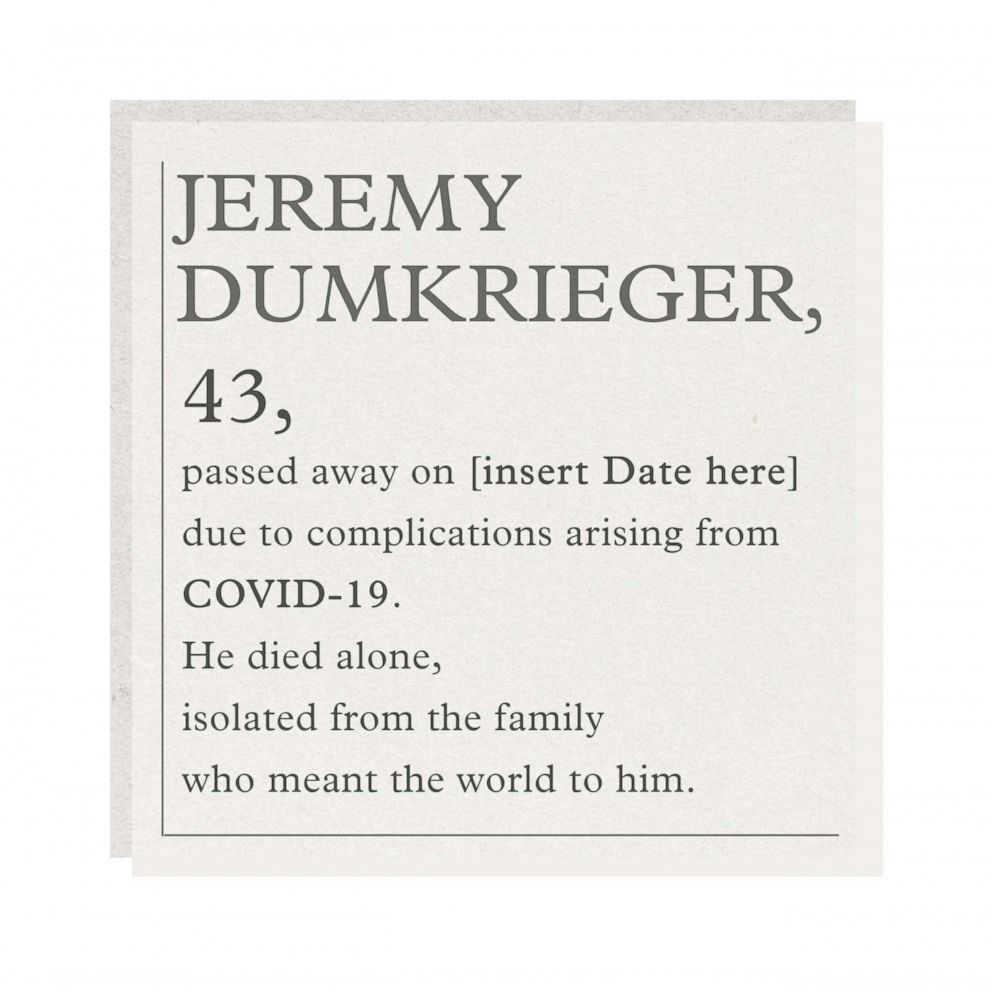 Half of online learning could be implemented, and school districts can request temporary exceptions.

Educators have been protesting in hopes that Reynolds will give local school leaders control in determining the safest return-to-learn plans.

"I would like to see masks on everyone," Dumkrieger said. "We want a safe return to school, which means safe plans."

Dumkrieger said he sent his obit to grab Reynolds' attention. 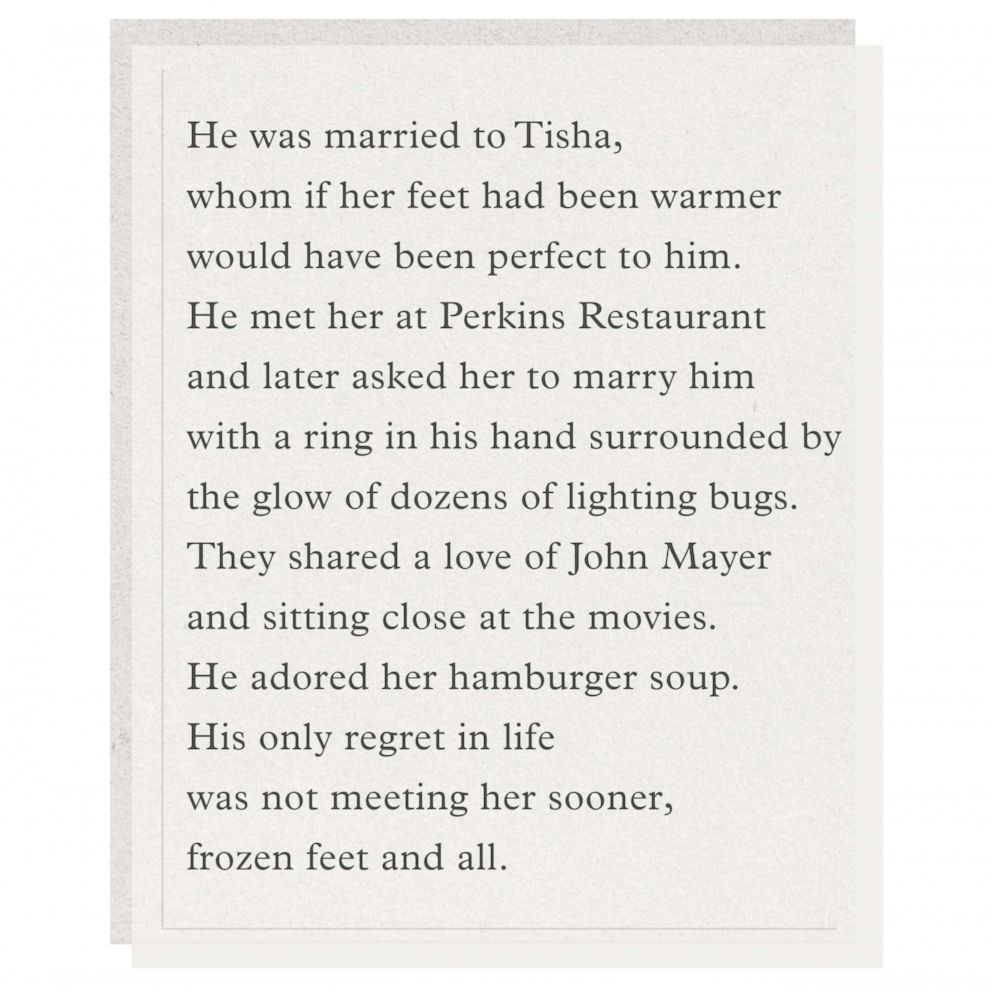 "And [to] say, 'This is what we're thinking about and a lot of teachers are too scared to say it," he explained. "Writing your own obituary reflects on who you are, what you've been and who you want to become. It's sobering for sure."

In his biographical mock notice of death, Dumkrieger wrote:

Jeremy Dumkrieger, 43, passed away on [insert Date here] due to complications arising from COVID-19. He died alone, isolated from the family who meant the world to him.

Dumkrieger also mentions his career path as an educator, his wife Tisha and their children.

In her obit, Finley wrote about her family and career change from attorney to teacher. Then, she pivoted:

You know what? I'm not dying for this - I won't even pretend to. I will fight with every fiber of my being as a mother, a teacher, a lawyer, an Iowan, and an American to make our current leadership understand and act with reason. 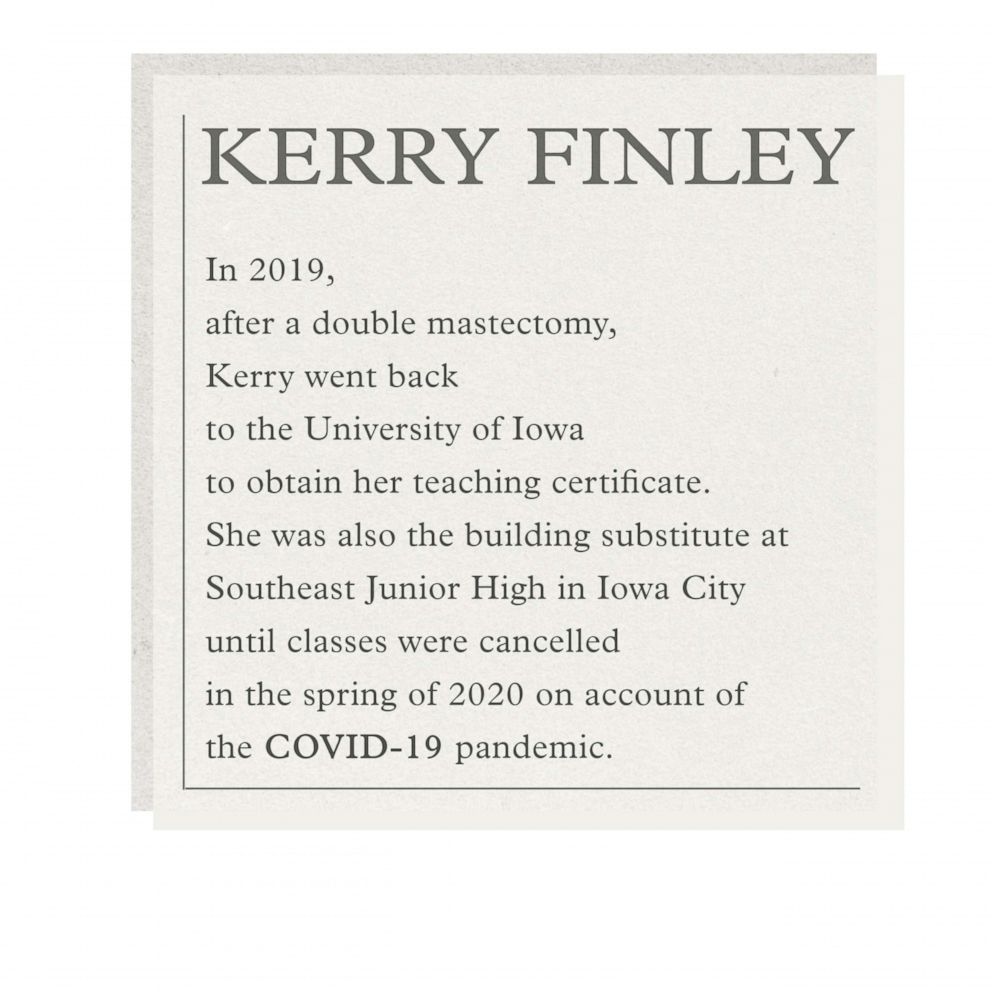 "I'm very worried. I'm a breast cancer survivor and I have some compromised immune system," Finley said. "I've only been a teacher for one year. Children can't learn unless they're in an emotionally-stable and safe environment."

Pat Garrett, a spokesman for the Governor's Office, said Reynolds believes getting Iowa's students and teachers back to school safely is an important part of the state's coronavirus recovery plan. 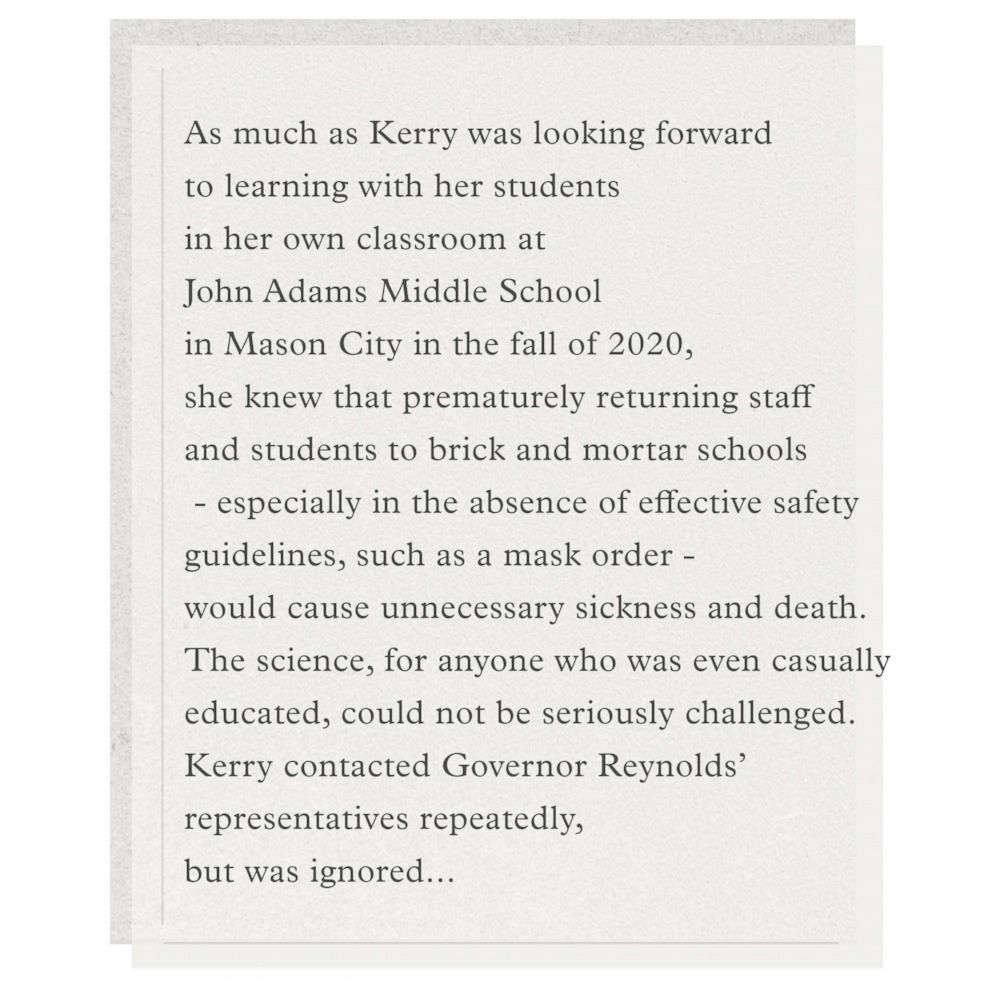 "Her proclamation helps implement the statute the legislature passed unanimously this summer and also gives flexibility and options for educators, schools, parents and students," Garrett said in a statement to "GMA."

In a statement posted to its website, the American Academy of Pediatrics (AAP) wrote that it "strongly advocates that all policy considerations for the coming school year should start with a goal of having students physically present in school." 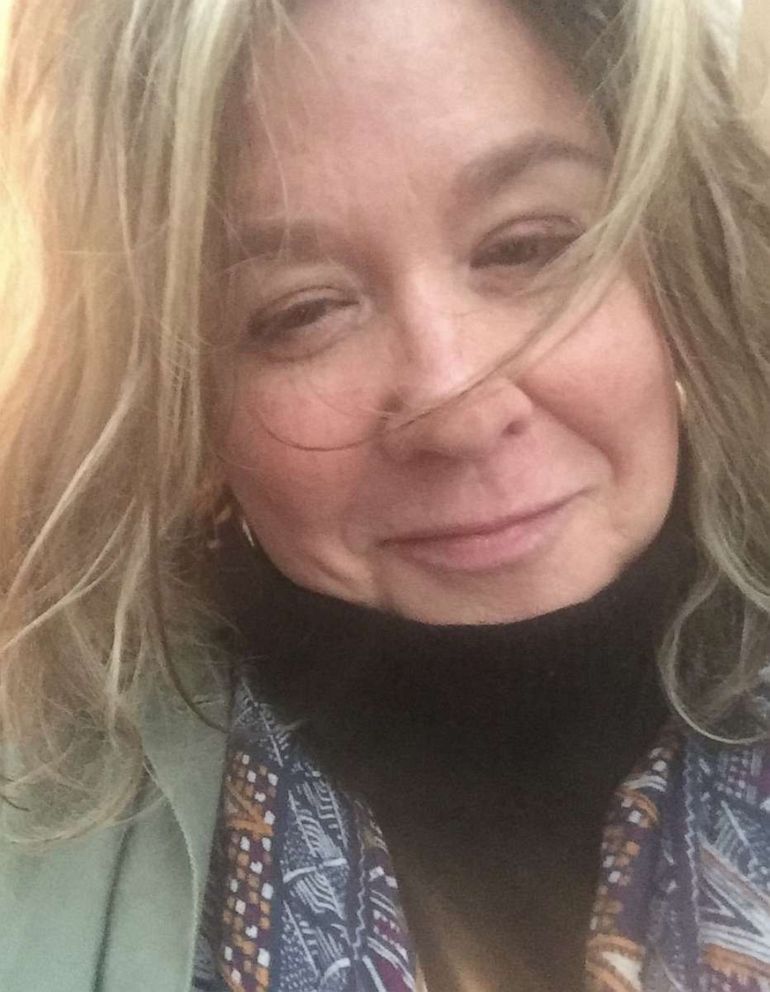 Kerry Finley
Kerry Finley, a 7th grade teacher from Iowa City, wrote her own mock obituary and sent to Iowa Gov. Kimberly Reynolds in protest of the state's reopening plans of schools amid the novel coronavirus pandemic.

The AAP stressed the importance of school in children's lives.

"Schools are fundamental to child and adolescent development and well-being and provide our children and adolescents with academic instruction, social and emotional skills, safety, reliable nutrition, physical/speech and mental health therapy, and opportunities for physical activity, among other benefits," the AAP said. "Beyond supporting the educational development of children and adolescents, schools play a critical role in addressing racial and social inequity." 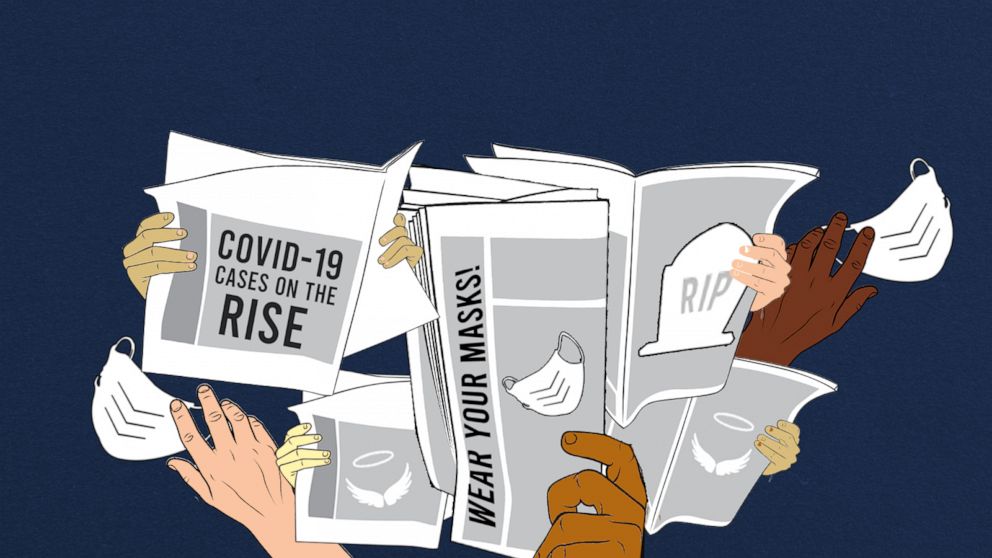 Finley believes mandating a premature return to face-to-face learning without a concrete plan, forces teachers and staff to choose between exposing themselves or their loved ones or keeping their health insurance, should they choose to exit the teaching force.