In an election year that saw a record-breaking number of women and women of color candidates run, it appears Congress will likely have a somewhat more diverse makeup in 2021.

Strickland and Young Kim, a Republican who holds a very narrow lead over the Democratic incumbent in California's 39th Congressional District, could also be the first Korean-American women to serve in Congress.

"Historically women often have to be coaxed into running for office, and so the fact that people are stepping up and that they have some support is really important," she said.

Thank you - to the voters of the 10th district for helping us make history last night, and to our supporters who have been with us on this journey. I am humbled by these results, and I look forward to working for our communities everyday in Congress. Let's get to work! pic.twitter.com/pyfNSGJc4L

As election results continue to come in -- with several House races involving women candidates still outstanding -- at least 50 women of color will serve in the U.S. Congress in 2021, surpassing the previous record of 48, set in 2019, according to the Center for American Women and Politics (CAWP) at Rutgers University.

At least 115 women of color ran for Congress in 2020, an election year beset by racial unrest and the coronavirus pandemic, which has disproportionately impacted people of color.

01:28:03
On election day, 115 women of color will be on the ballot for House seats &mdash; a record for American politics. Deborah Roberts spoke with 8 of those women across the aisle in a roundtable discussion.

Overall, at least 141 women will serve in the 117th Congress, surpassing the record of 127 women serving in Congress that was set in 2019, according to CAWP.

New Mexico is sending three women to Congress, making it the largest all-women delegation in U.S. history, according to CAWP.

MORE: A candid conversation with eight women of color running for Congress this year

What will be different in the next Congress, is that more of the women in Congress will be Republican women, notes Debbie Walsh, CAWP's longtime director.

"As much as 2018 was this record year [for women], it was also a year that was all about Democratic women, and this year has been, from the beginning, a story that has had a partisan tilt, and this time on the Republican side," she said. "As of right now, the Republican women have beat their record for new women elected."

"I think that what we saw this cycle was a concerted effort on the part of Republican women activists to make sure that they were recruiting and supporting and funding Republican women who were running," said Walsh, who noted the work done by Republican Rep. Elise Stefanik and organizations like Winning for Women and View PAC on the right. "It speaks to, this doesn’t just happen, that there has to be intentional work done and a commitment to seeing more women in order for that to happen." 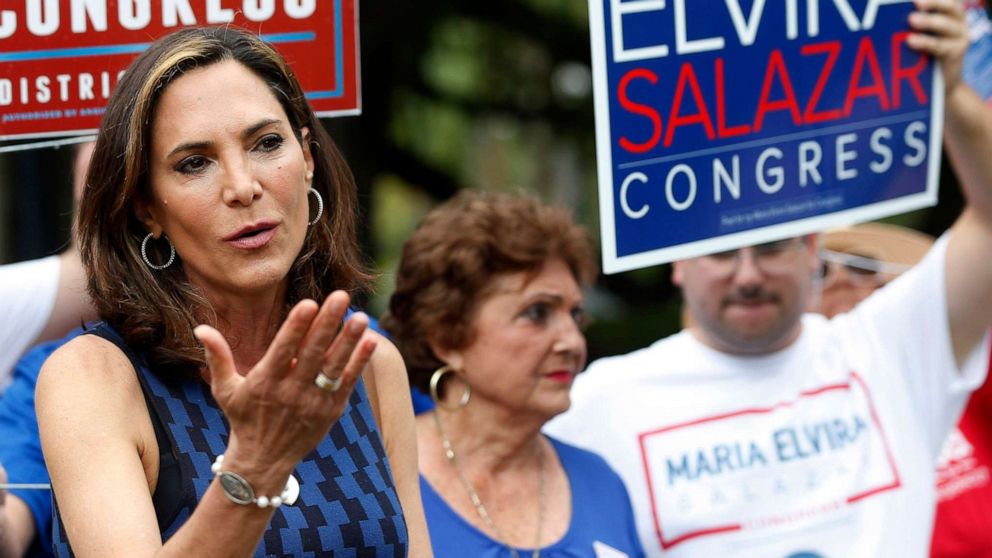 Wilfredo Lee/AP, FILE
In this file photo, Maria Elvira Salazar speaks with members of the media outside a polling station at the Coral Gables Branch Library, during the 2018 Florida primary election, in Coral Gables, Fla., Aug. 28, 2018.

Republican activists credit their efforts on the ground, not the Republican Party leadership, with getting women on ballots and winning races in this year's election.

"The party didn’t do any of this," said Meghan Milloy, founder and executive director of Republican Women for Progress, a PAC formed after the 2016 election to help elect Republican women. "They’re going to claim a victory by saying, 'Look at us, this is the most Republican women we've ever had,' and they should not be taking any credit because they didn’t do anything."

"It is truly from the boots on the ground, from View PAC and from groups like ours, that have truly tried to follow in the footsteps of what the Democrats have been doing for so long with groups like Emily's List and others that have really been prioritizing women forever," she said.

"I think it’s really important and it can’t be said enough that where the House Republican Conference started the cycle was 13 Republican women in the conference, two of whom were retiring. That is an extremely low baseline," said Hill-Davis. "We’ve made some extraordinary gains, but we were also coming from such a deficit that I don’t think it’s comparable to the Blue Wave that Democratic women saw in 2018, but it is meaningful progress toward a much more equitable situation across the House and Senate Republican conferences."

It does appear that while Strickland and other women newcomers are joining the Democratic caucus in the House, the caucus could be losing other women candidates that were part of that Blue Wave of women who won in 2018.

Rep. Kendra Horn, a Democrat who won a traditionally Republican district in Oklahoma in 2018, lost her House race to another woman, Republican Stephanie Bice.

"If all the Democratic women who lose are ones who got elected in 2018, it is not completely surprising that there would be some drop-offs in this class in that so many of these women flipped districts from red to blue," said Walsh. "What we knew about this cycle was the key for the Democratic women was they had to defend themselves in some really vulnerable districts, and that first re-election is the hardest."

Strickland, of Washington state, won her first Congressional election in a district that is not minority-majority, something she views as "breaking another barrier."

"I will make history as the first African-American member of Congress from the Pacific Northwest and the first Korean American woman, and I’m not representing a district that’s a minority-majority," she said. "In many ways this is also breaking another barrier because it shows that the people of the 10th Congressional District are looking for proven leadership, are looking for competence and they have put their faith in me."