When Florida students return to school next year, there will be a new safety measure in place thanks to a bill signed by Gov. Ron DeSantis last June. Alyssa's Law, named after 14-year-old Alyssa Alhadeff, a victim of the shooting at Marjory Stoneman Douglas High School in Parkland, requires all Florida public and charter schools to implement a mobile system that silently alerts law enforcement and first responders of potentially life-threatening situations -- from shootings to medical emergencies.

But one Florida school is ahead of the pack. Coral Springs Charter School installed and began testing a panic alert system in February before the spread of the novel coronavirus. ABC News saw the system in action before the pandemic with assistance from Andrew Pollack, whose daughter Meadow, 18, was also killed in the Parkland shooting.

MORE: Why it Matters: Parkland shooting survivors on what's driving them to vote

It's been more than two years since a grieving and angry Pollack told President Donald Trump at a White House meeting, "There should've been one school shooting and we should've fixed it."

Now, Pollack said he hopes the launch of his new program, School Safety Grant, and the implementation of ALERT, or Active Law Enforcement Response Technology, will be one fix when gun laws fail. 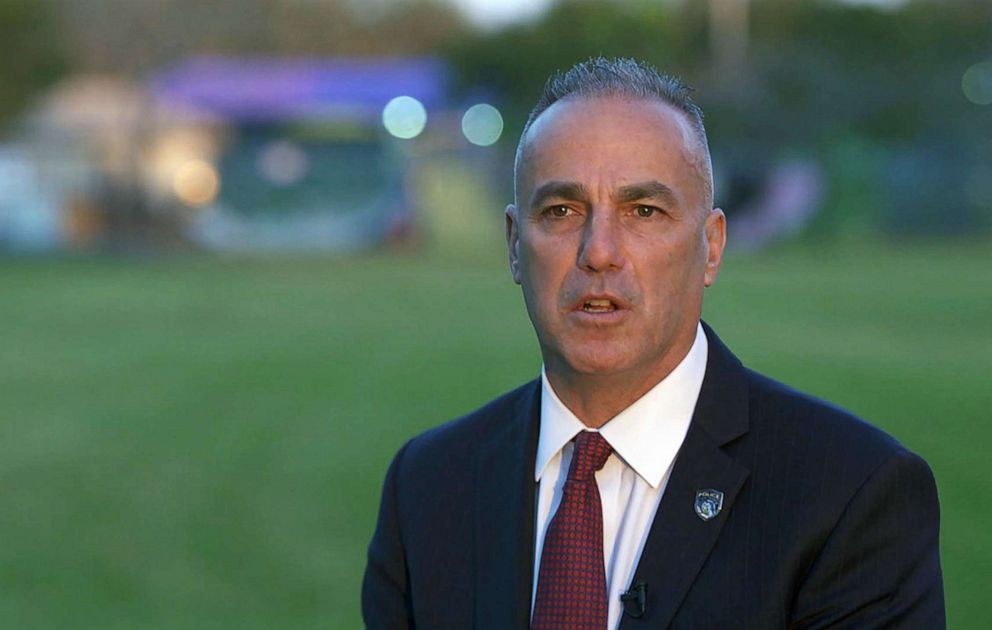 ABC News
ABC News saw the system in action before the coronavirus pandemic with assistance from Andrew Pollack, whose daughter Meadow, 18, was also killed in the shooting at Marjory Stoneman Douglas High School in Parkland, Fla.

The “School Safety Grant,” Pollack says, will help fund school safety enhancement nationwide by distributing grants. Police departments will be awarded up to $40,000 and $20,000 per campus for school districts.

But it’s not just schools, says Lee Mandel, CEO of IntraLogic Solutions. Hospitals, movie theaters, houses of worship and other mass-gathering locations will be eligible. The grants will cover the “full implementation, full deployment and all the software for life,” says Mandel.

IntraLogic Solutions, along with the other School Safety Grant partners, Actuate and SaferWatch, are initially donating up to $20 million worth of software licenses and deployment services that will allow grant recipients to use their existing infrastructure to connect them to their local police departments.

ALERT gives police access to real-time surveillance cameras within a building once a panic button is hit during an active incident or a button is hit on a phone application.

Dispatchers can then identify and track a suspect's location, and relay crucial information to officers as they respond. 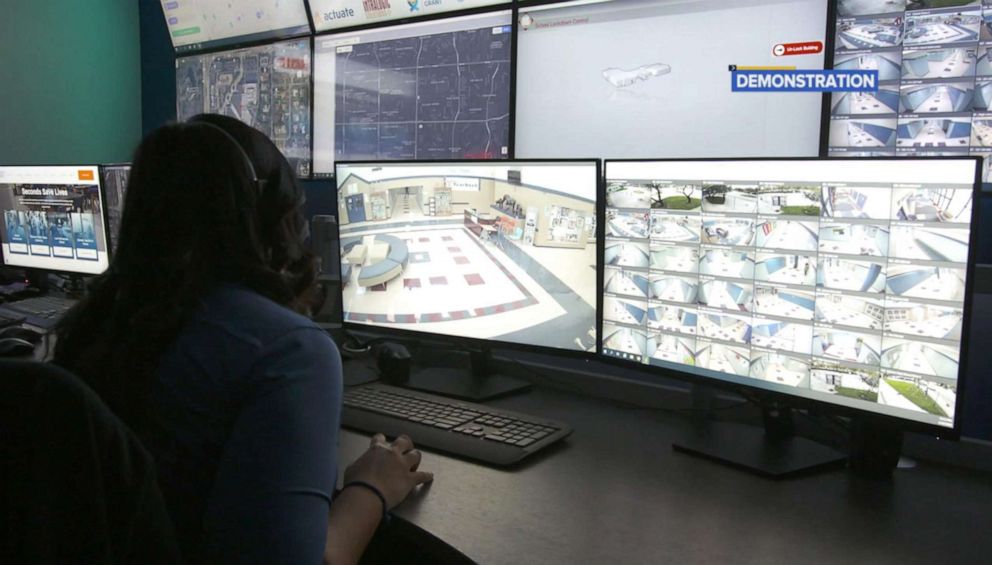 ABC News
ALERT, which stands for Active Law Enforcement Response Technology, is a system that gives police access to surveillance cameras within buildings such as schools.

"When they arrive on the scene, they know exactly where to go, how to get in, where the shooter is," Mandel told ABC News. Mandel began developing the ALERT software after 26 people, including 20 children, were killed at Sandy Hook Elementary School in December 2012.

"It really hit home," Mandel said. "And we said, 'How can we make a difference?'"

Mandel said he met Pollack shortly after the Parkland shooting that killed 17 and injured 17 others. Since his daughter's death, Pollack has been involved in legislative efforts, including the signing of the School Safety Bill in Florida, that in part raised the minimum age to buy a firearm from 18 to 21, banned bump stocks and imposed a three-day waiting period to purchase a gun.

"For me, it's always been about school safety," Pollack said. "I don't want to debate about anything else."

MORE: COLUMN: There's no undoing the pain of the Parkland massacre, but it won't define me or my school

"If this type of software was in place ... she'd be alive today," Pollack said.

"There were so many miscommunications, human errors, people not trained properly," he continued. "This makes police departments efficient. It takes them into the 21st century of response."

Identifying and solving the problems

Coral Springs police were the first to enter Marjory Stoneman Douglas High School the day of the shooting. The department is the first in the nation to receive ALERT. 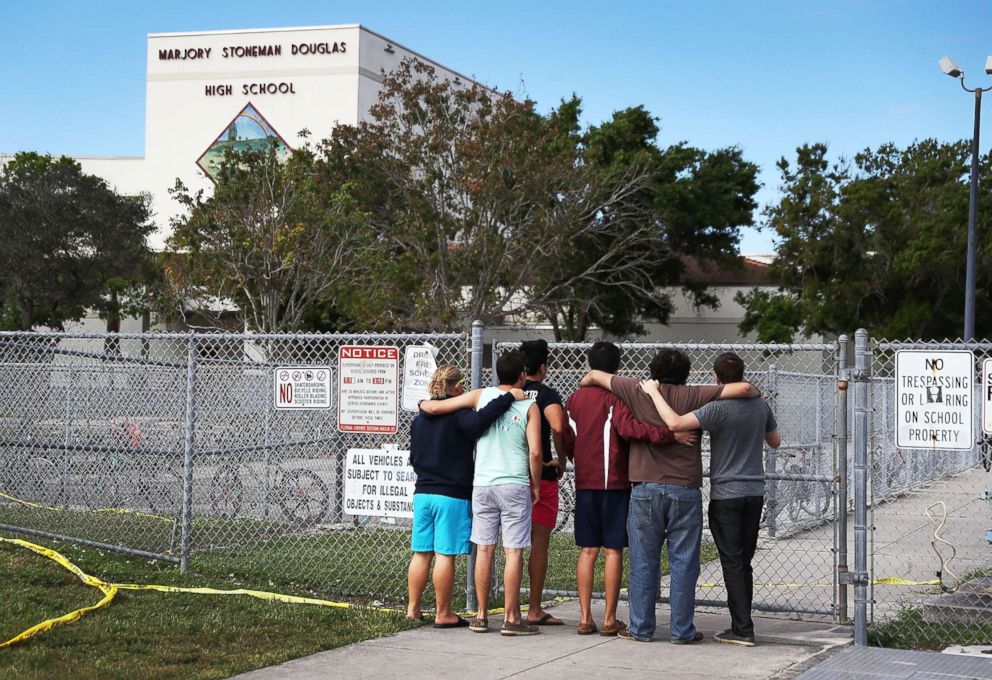 "[Marjory Stoneman Douglas] had a good camera system, but the department didn't have access," Coral Springs Police Chief Clyde Parry told ABC News. "Without us being able to tie in and look at the cameras, it obviously hampered our response in that situation." He noted that at one point information was delayed by as much as 20 minutes and officers believed the shooter was on the third floor when in reality he had left the building.

Another problem, Parry said, was the fire alarm. "It was hard for some of the students to hear ... any announcements over the intercom," he said.

"We're going to look at being able to disable the fire alarm remotely so that now we can give clear directions, 'A code red has been called -- enter your classroom, lock yourself down,' you know, so that those things, you know, can't happen again."

"We looked under every rock, we turned every leaf over," Parry said. "It's important to go through them thoroughly, vet them and find out what did I do good. What did I do bad? What can I fix for the next time?"

Coral Springs police has begun working toward interoperability between fire departments and the sheriff's office. They have also established mutual aid agreements with the jurisdictions around them so that they are able to respond to events if they are within striking distance.

As for the ALERT technology, "It's life changing," Parry said. "It's taking us from being in a rowboat to being in a starship."

Parry told ABC News that information given during 911 calls can often be unhelpful if the caller is under stress and shock.

"With this technology, it allows us to be able to have well-trained people give defined answers and directions of where to travel, exactly where the problem is," he said. "If you have a camera and I'm looking for somebody who's wearing black pants in a maroon shirt ... you can do that. You can give a direction of travel. You can tell them which area to enter the school. More importantly, which area not to enter the school, [like] if we see that somebody is maybe set up in a sniper situation."

"In some instances I imagine it will go faster than even receiving our first 911 call," Parry said. "In any emergency, where seconds matter ... this is technology that is going to trim off as many seconds as you can."

Although this technology is a step forward, those on the receiving end are confident it is not an end-all, be-all solution.

"But it will bring school safety to a different level than what we have right now. And I am excited about it. I look forward to it. And I'm embracing it," Parry added. 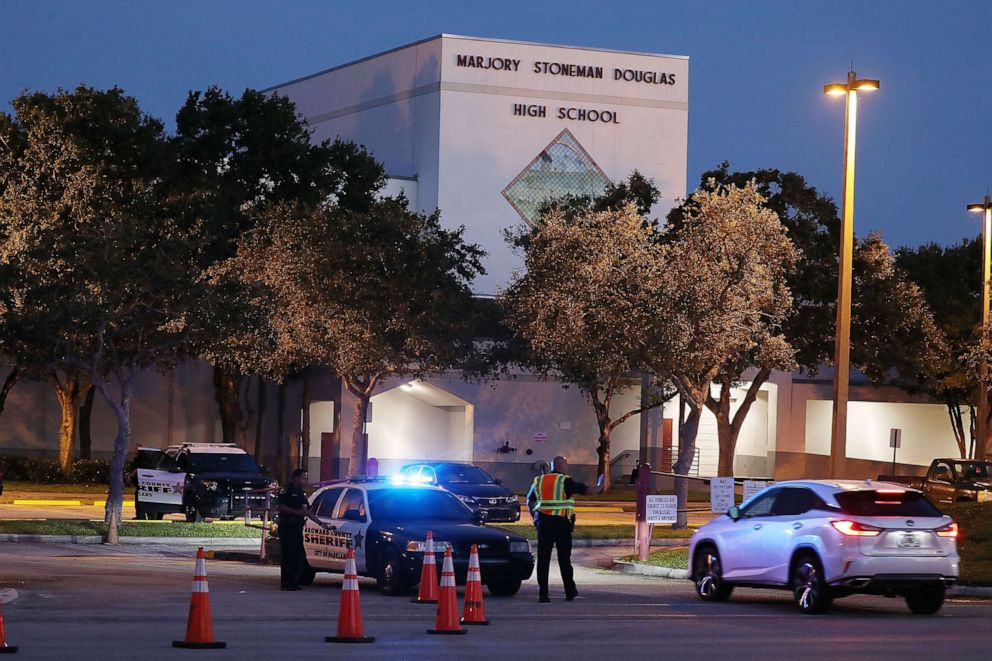 "When it's literally down the street from you, I think that has much more of a significant emotional impact," Principal Gary Springer told ABC News. "Parkland is not just our neighbor. They're literally a family member."

MORE: 'Sobering' photos show what kids think about dying in a school shooting

"I think it's really crucial that we're able to have the latest and greatest technology ... at our fingertips," Springer told ABC News. "For our first responders to have instant access into our building and a bird's-eye view ... into what's going on at our school at any time during the day, I welcome that."

The school has upward of 100 cameras throughout the building.

"This provides immediate response in order for the situation to be controlled at a greater rate," he said. "The school now has the ability to automatically set off the panic alert and that'll shut down the school. And what that'll do is immediately alert first responders upon arriving on the scene. They will already have access to a full picture of the school, which includes an overlay of the entire footprint of the school that allow someone to communicate with first responders and automatically unlock the doors that are on lockdown."

Officers were prepped beforehand by Coral Springs Director of Emergency Management Alex Falcone. The drill began when Coral Springs Police Department communication center manager Kathy Liriano received an alert that a panic button was hit at the school. Liriano immediately alerted police, then took over the school's PA system to address the shooter.

"Police are on scene. Shooter, drop your weapon," Liriano said.

"Once they start talking over the intercom, the shooter may realize, 'All right, the police are here,' and they may abandon what they're doing and try and escape or ... shoot themselves. We know that a lot of these active killers have [died by] suicide once the police show up," Parry said.

Liriano then relays crucial information to officers, including the race of the suspect and their clothing. With the school on lockdown, she is able to unlock the door for police. 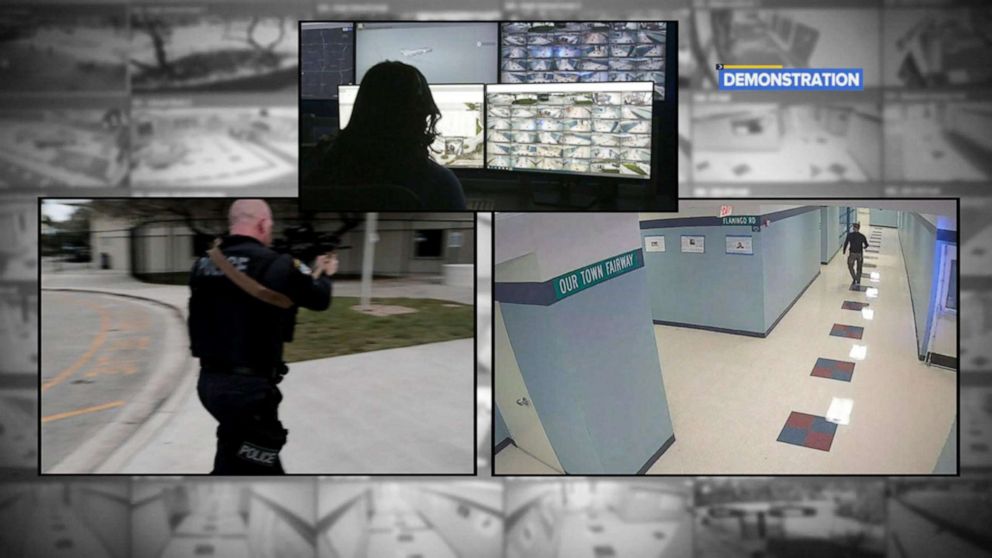 ABC News
ALERT gives police access to real-time surveillance cameras within a building once a panic button is hit during an active incident or a button is hit on a phone application.

And as officers rush to the scene, the dispatcher continues to track the shooter in order to give police step-by-step directions to locate and apprehend the shooter upon their arrival.

MORE: How to talk to kids about the mass shootings in El Paso and Dayton

On the first drill, Coral Springs police apprehended the shooter in less than four minutes.

The officers then conducted a second drill in which the shooter entered the school and moved at random.

"What we're really going to try to test with this is how quickly we can guide officers through the hallways. We're going to test using a lot of different cameras. We're gonna test using all of the features that the system has to offer," Falcone told ABC News correspondent Victor Oquendo. "They're going to have to search the school and they're gonna have to rely on the information provided to us from the software in order for them to find them."

But a few minutes into the drill, Liriano selected a button that opened up nearly 300 camera views at once.

"We'll disable that button so you can't accidentally click 10 cameras at the same time, because otherwise you're going to have too much on the screen," Mandel told Liriano.

"This is an excellent opportunity for us, so we want to make sure that we drill and we drill hard because if we can identify issues now on a safe day in a controlled environment, we can fix that," Falcone said.

They then elected to restart with a new drill. This time officers apprehended the shooter just one minute after entering the building.

Mandel says the purpose of the drill was to locate additional features and challenges of the software to make it efficient and effective for users. Following the drill, the company removed the feature. 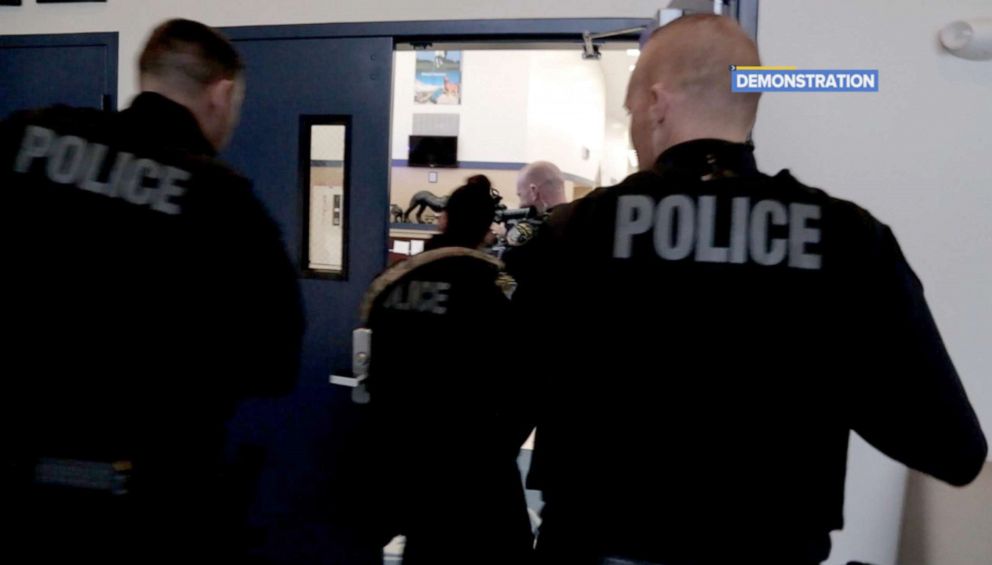 "It gives us a huge advantage to know exactly where the suspect is at any given moment and a school of this size, you never know where they can be," Cherry said.

MORE: Are bulletproof doors the future of school safety? This school district is testing them out

Cherry was a first responder to the Parkland shooting.

"It's invaluable to have if, God forbid, there's another incident like that," Cherry said about the software.

For that reason, Pollack said he hopes this technology expands nationwide and is the future of responding.