Former Dallas police officer Amber Guyger was sentenced on Wednesday to serve 10 years in prison for the fatal 2018 killing of an innocent man she shot when she mistakenly entered his apartment believing it was her own.

But in a remarkable act of kindness, the brother of the victim took the witness stand and spoke directly to Guyger, saying, "I love you like anyone else," and later hugged her in the courtroom before she was led off to prison.

The Dallas County jury reached a unanimous decision on the sentence just before 4 p.m. Central Standard Time, after deliberating for a little over an hour.

Judge Tammy Kemp ordered Guyger and her attorneys to stand as she read the jury's decision on sentencing.

Guyer was turned over to the Texas Department of Criminal Justice to immediately begin her sentence. She could be eligible for parole in five years. 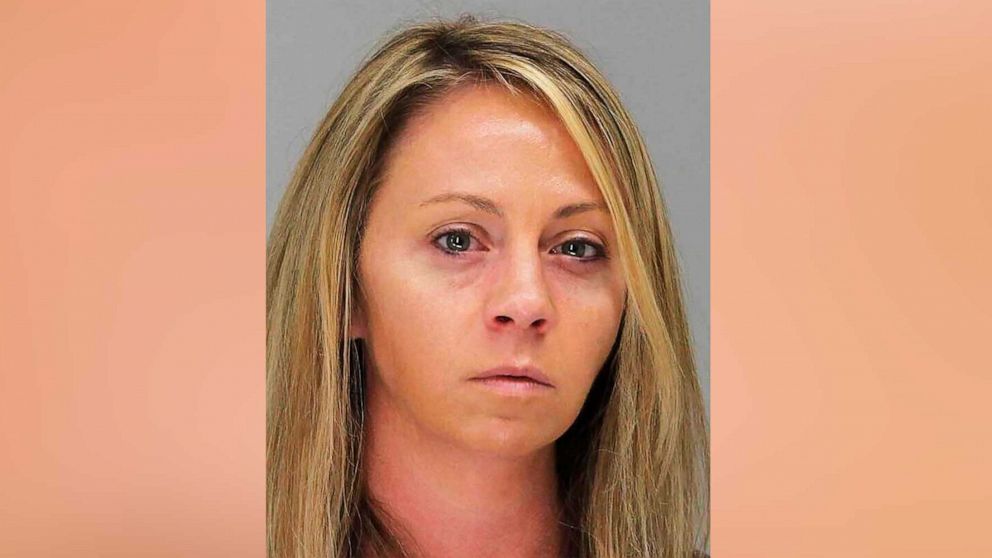 The sentence appeared to initially disappoint the family of the victim, Botham Jean, who had hoped for far harsher punishment for Guyger. Several members of the family broke down in tears, shaking their heads as if in disbelief of the jury's decision.

But Jean's 18-year-old brother, Brandt Jean, took the witness stand and spoke to Guyger, saying, "I know if you go to God and ask him, he will forgive you."

"I love you just like anyone else and I'm not going to hope you rot and die," Brandt Jean told Guyger. "I personally want the best for you. I wasn't going to say this in front of my family, I don't even want you to go to jail. I want the best for you because I know that's exactly what Botham would want for you. Give your life to Christ. I think giving your life to Christ is the best thing Botham would want for you."

Brandt Jean then asked Kemp if he could give Guyger a hug, a request the judge granted.

He stepped off the witness stand and met Guyger in front of the judge's bench and embraced as Guyger broke into tears. 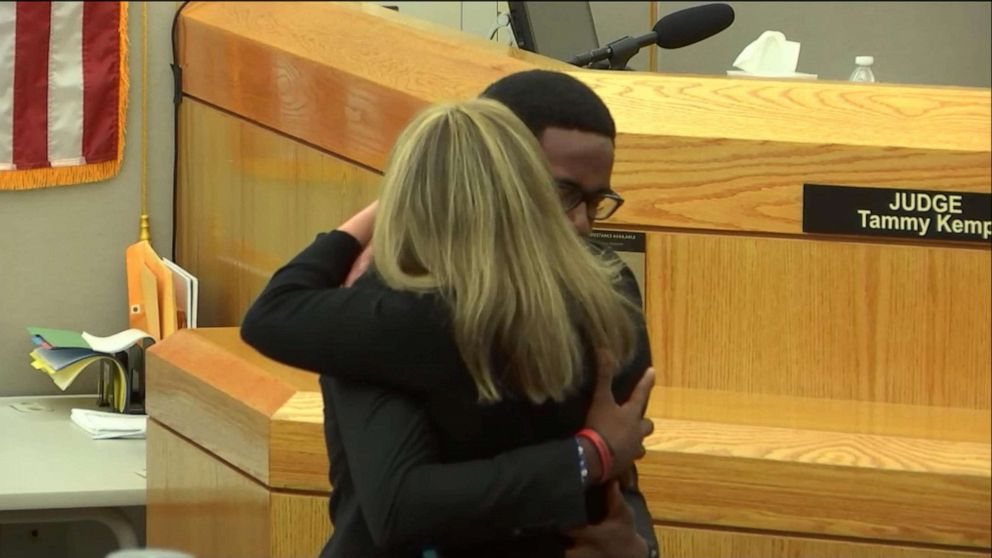 Moments later, Kemp spoke to Guyger privately and also hugged her and appeared to give her words of hope. She also handed her a Bible.

Jean's mother, Allison, said at a post-sentencing news conference that while the death of her son "changed my life, changed my family's life," she will accept the jury's decision and try to move on.

"That 10 years in prison is for her (Guyger) to reflect and to change her life," Allison Jean said. "But there is much more to be done by the city of Dallas. The corruption we saw during this trial must stop. The city of Dallas needs to clean up inside. The Dallas Police Department has a lot of laundry to do. The Texas Rangers need to get on board."

She noted the contamination of the crime scene after her son was killed and said the poor use of the training Guyger received as a police officer "should never happen again."

"His (Botham's) privacy was violated. She intruded on him and that was not enough. She killed him," Allison Jean said. "If Amber Guyger was trained not to shoot in the heart, my son would be standing here today."

Many supporters of the Jean family standing outside the courtroom said the sentence was like a "slap in the face" to the family and began chanting, "No justice, no peace!"

Dallas County District Attorney John Creuzot said he accepted the sentence of the jury, which was sequestered for the entire trial.

"I expected perhaps longer, but I respect what they did," Creuzot said outside the courtroom.

Creuzot described the compassion Brandt Jean showed to Guyger as "an extraordinary act of healing and forgiveness."

He said that in 37 years of practicing law, "I never saw anything like that."

Earlier in the day, the jury heard tearful victim impact statements from family members and friends of the victim, Botham Jean, and Guyger's relatives and former colleagues in the Dallas Police Department.

The sentencing phase came a day after the jury rejected Guyger's self-defense claims and convicted her of murder in the fatal shooting of Jean, 26, an innocent man eating ice cream in his own home just before he was killed on Sept. 6, 2018.

The 12-member jury reached its unanimous guilty verdict after deliberating for less than two days.

Guyger, who was fired from her job as a Dallas police officer in the wake of the shooting, had faced a maximum sentence of up to 99 years in prison. 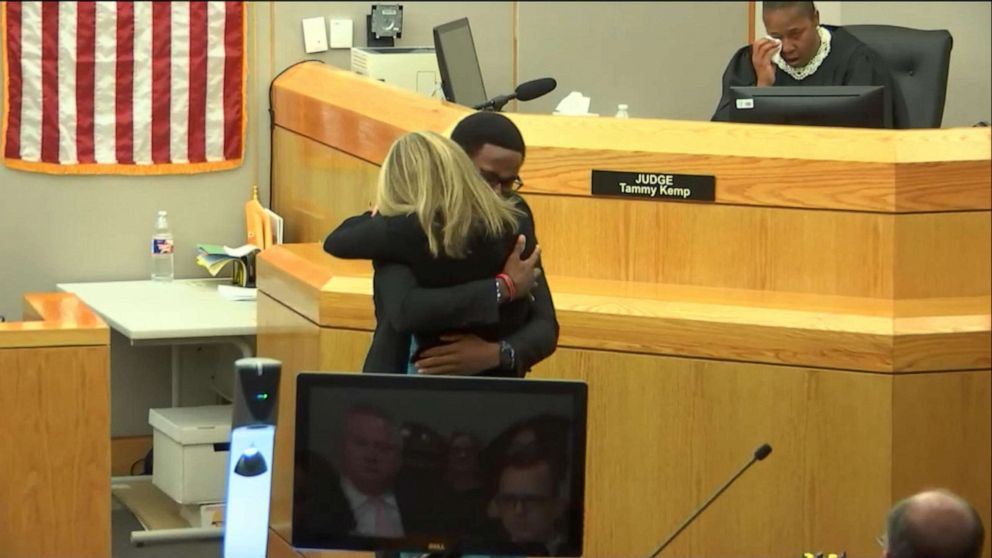 Before the jury began deciding Guyger's punishment, Dallas County Assistant District Attorney LaQuita Long suggested to the panel that the sentence should not be lower than 28 years, noting that Jean would have turned 28 this past Sunday.

"The only reason we all sit in this courtroom today is because of her actions," said Long, pointing to Guyger seated at the defense table. "And for her actions, there must be consequences."

She left the jury with a quote to mull over from the eulogy Botham Jean's minister gave at his funeral: "To the defendant, he was just a silhouette in a room. To EVERYONE who knew Bo, he was the brightest light in the room."

Guyger's defense lawyer Toby Shook asked the jury for mercy, pleading with them not to give Guyger a sentence meant for someone who kills out of "hate, for self-gain, who does so without remorse."

He said Guyger is incredibly remorseful and that she made a series of "horrible mistakes" that caused her to "pull that trigger in an instant, an instant she'll have to live with the rest of her life."

After being found guilty, the 31-year-old Guyger was immediately taken to jail and spent Tuesday night in custody. She was in handcuffs and leg irons when guards escorted her into court on Wednesday morning.

Judge Kemp granted a request from Guyger's defense team that the restraints be removed while Guyger was in court.

Earlier Wednesday, Jean's father, Bertrum Jean, broke down in tears on the witness stand as he spoke of his son. He said how much he missed the conversations on the phone that they shared every Sunday.

"Sundays are not a good day for me because I'm not hearing his voice," he said. 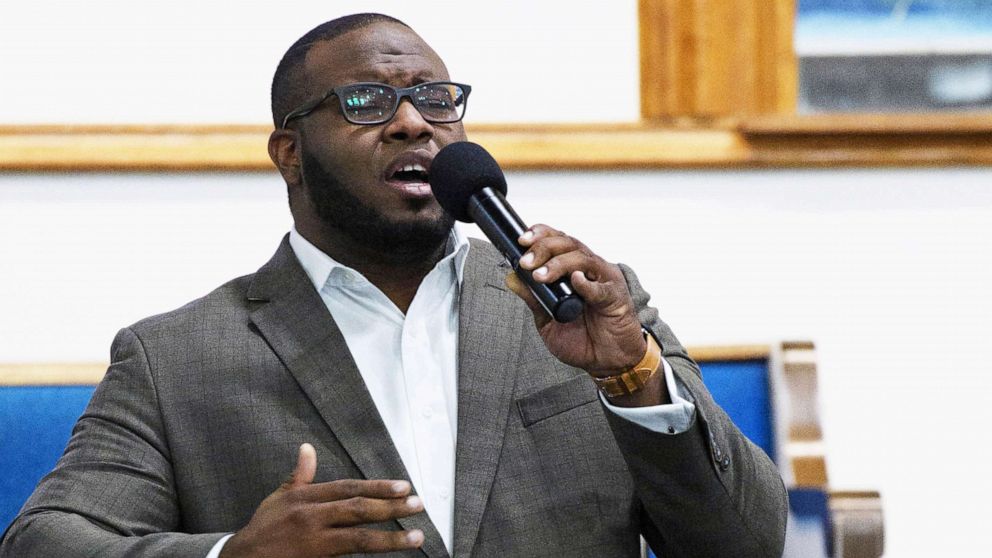 Bertrum Jean said his son's death has traumatized his family. Showing him a photo of him hugging his wife on the day of their son's funeral, Long asked him to describe what was going through his mind when the photo was taken.

"How could that happen to us, our family?" said Bertrum Jean, his voice choking with emotion. "How could we have lost Botham -- such a sweet boy. He tried his best to live a good, honest life. He loved God. He loved everyone. How could this happen to him?"

"How could it be possible?" he continued, wiping his eyes with a handkerchief. "I'll never see him again."

On Tuesday, Bertrum Jean's wife, Allison Jean, testified, saying, "My life has not been the same. It's just been like a roller coaster."

Guyger's mother, Karen Guyger, also addressed the jury, describing her daughter as a "sweet and loving" child who always worries about her.

Karen Guyger revealed that her former boyfriend molested Guyger when she was around 6 years old. Despite the childhood trauma, she said her daughter continued to work hard at school and even took up the violin and joined a mariachi band in high school.

She said Guyger worked full-time jobs starting from the age of 16 to support herself through high school and college at the University of Texas at Arlington. She said her daughter's childhood dream was to become a police officer, and that she joined the Drug Abuse Resistance Education (DARE) program in high school and went on ride-alongs with the Arlington, Texas, Police Department.

The mother said Guyger left college her junior year when she was accepted into the police academy in Dallas.

"She was so excited when she found out," Karen Guyger said.

The mother said that Guyger's bubbly personality dramatically changed after she killed Jean.

"She wanted to take his place. She'd always tell me she wished she could have taken his place. She feels very bad about it," the mother said.

Guyger's sister, Alana Guyger, 37, echoed their mother when she took the witness stand. 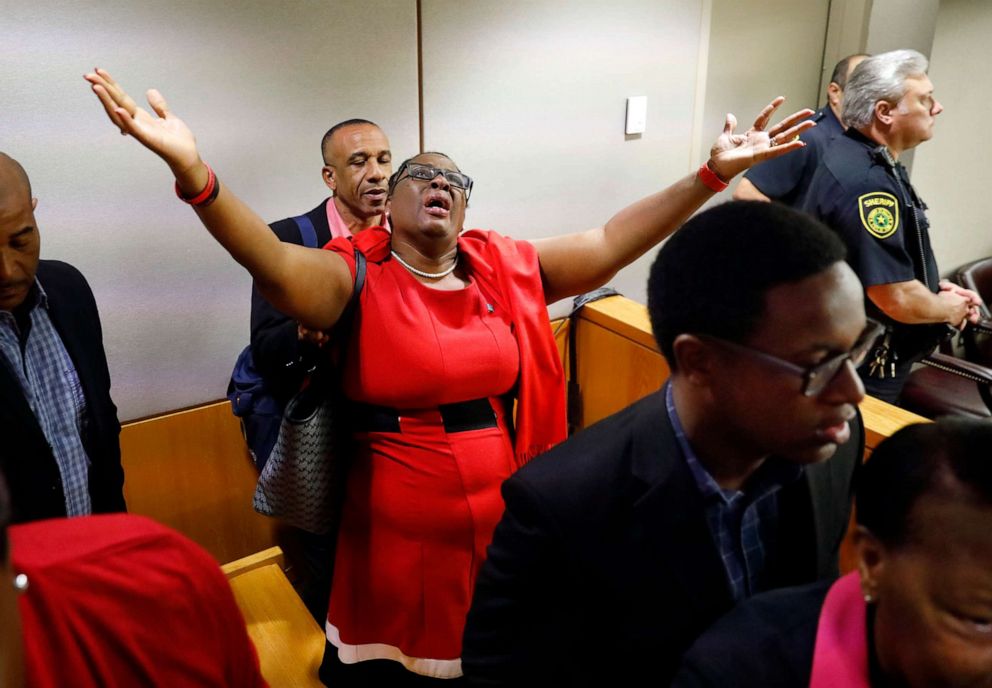 "She's doesn't have that same light or energy that she had before," Alana Guyger said. "She's expressed to me how she feels bad spending time with her family because he (Jean) can't spend time with his."

Several of Guyger's former colleagues with the Dallas Police Department also testified, describing her as an outstanding police officer who always had their back. Several of her friends also testified that Guyger was always supportive and the first one they turned to when they needed help through a rough patch.

Guyger did not testify during the sentencing phase.

(MORE: Mother of Botham Jean gives emotional statement: 'My life has not been the same')

But on Tuesday and Wednesday, prosecutors showed the jury numerous text messages and social media posts in which Guyger shared racists and violent views, or chimed in on equally offensive memes.

Under one meme reading "I wear all black to remind you not to mess with me, because I’m already dressed for your funeral," Guyger allegedly commented, "yah i got meh a gun a shovel an gloves if i were u back da f--- up."

(MORE: Ex-cop testifies at her murder trial: 'I was scared to death')

In a text exchange with police colleagues from Jan. 15, 2018, Guyger, who had been assigned to crowd control at the annual Martin Luther King Jr. Day parade in Dallas, answered a colleague who wrote, "When does this end lol." Guyger allegedly wrote, "When MLK is dead… oh wait…" She later texted about the parade crowd, writing, "Just push them… or spray your pepper spray in that general area."

After one of Guyger's former colleagues, Officer Thomas MacPherson, vouched for Guyger's good character, Long asked him if he was aware of her text about pepper spraying parade-goers.

"That would be out of character," MacPherson answered."