The eldest son of Britain's longest-reigning monarch has taken his late mother's place on the throne.

King Charles III is the first child of Queen Elizabeth II and Prince Philip, Duke of Edinburgh. Upon the death of his mother on Sept. 8, Charles succeeded her as king of the United Kingdom and the other Commonwealth realms.

Charles, 73, was born at Buckingham Palace in London in 1948. He was just 3 years old when he became the heir apparent as his mother acceded to the throne as queen, following the death of her father, King George VI. He is the first heir to see his mother crowned, according to a biography on the royal family's official website. 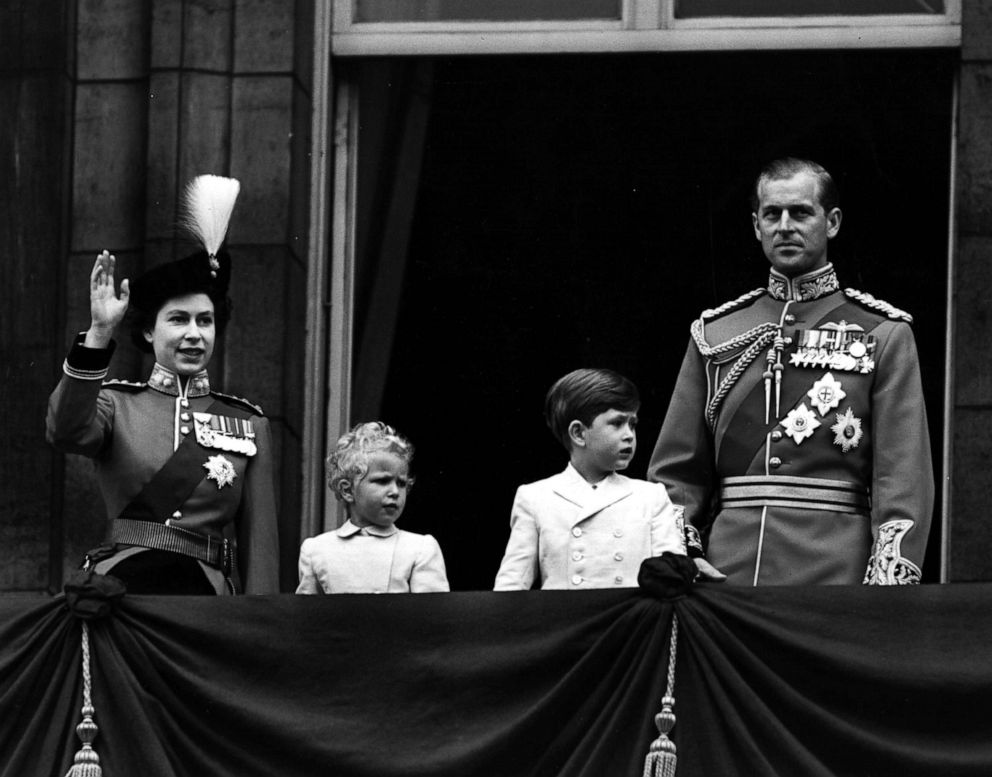 Fox Photos/Getty Images, FILE
Queen Elizabeth II in uniform as Colonel Chief of the Grenadier Guards, with Prince Charles, Princess Anne and The Prince Philip, Duke of Edinburgh, waving from the balcony of Buckingham Palace, in London, June, 1953.

Charles attended school rather than receiving tutoring at the family's palace home. In 1970, he graduated from the University of Cambridge with a Bachelor of Arts degree, becoming the first heir apparent to earn a university degree. Cambridge later awarded him a Master of Arts degree.

Elizabeth made her eldest son the Prince of Wales in 1969, among other royal titles, after he had spent a term at the University College of Wales at Aberystwyth, where he learned to speak Welsh. Two years later, Charles took his seat in the House of Lords, the upper house of the parliament of the United Kingdom.

Charles then spent the next few years serving in both the Royal Navy and Royal Air Force, following in his father's footsteps.

In 1981, Charles married Lady Diana Spencer, who became the princess of Wales. The couple had two sons, William and Harry, who are second and sixth in line to the throne. 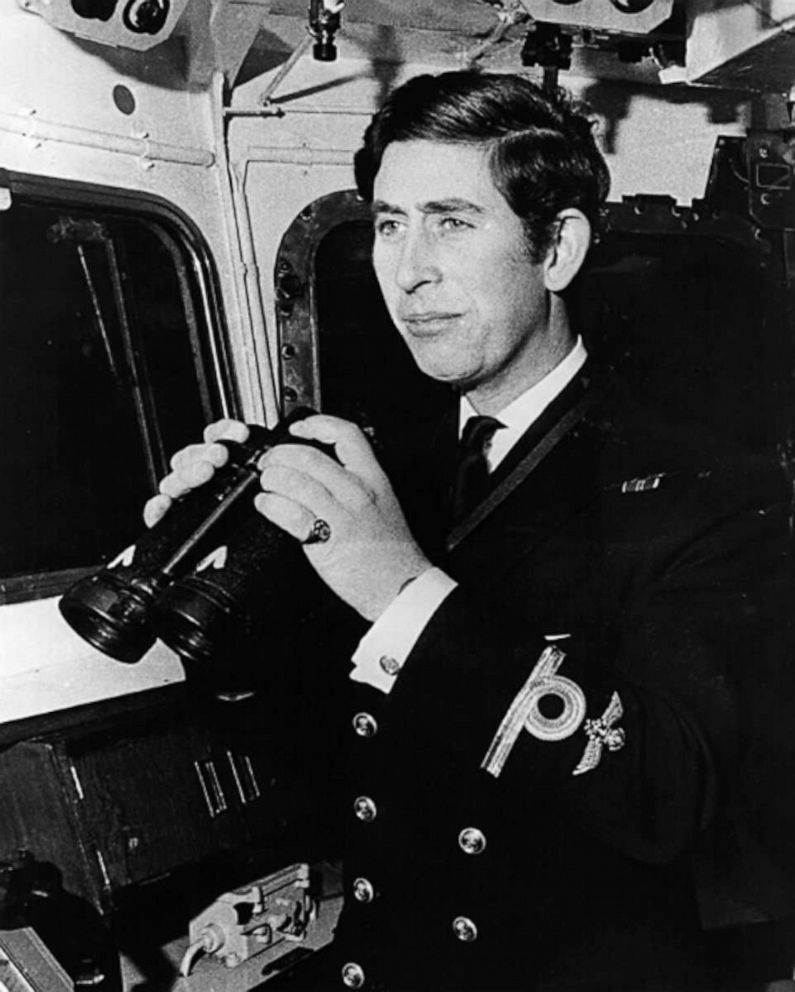 Fox Photos/Getty Images, FILE
In this Feb. 12, 1973 file photo, Charles, Prince of Wales is shown serving as a sub-lieutenant on the bridge of a Royal Navy Frigate, Minerva before setting sail on routine patrols and exercises around the West Indies.

A 1994 biography authorized by Charles -- "Prince of Wales," by Jonathan Dimbleby -- revealed that he felt pressured by his father to marry Diana and that he wasn't ever in love with her. According to the book, Charles began having an affair with Camilla Parker Bowles in 1986. The two had met at a polo match several years prior.

Charles and Diana agreed to separate in late 1992, and their marriage was dissolved about four years later, according to the royal family's official website.

MORE: Who's who in the British royal family

A 1992 biography on the late princess of Wales, "Diana: Her True Story," in which she collaborated with the author, Andrew Morton, revealed further details on the troubled marriage, including Diana's suspicion and jealousy over Charles's clandestine romance and how she came to consider Camilla as the "third person" in their relationship.

In 1997, Diana was killed in a car accident in Paris. Both the driver of the car and Diana's boyfriend, Egyptian socialite Dodi Fayed, who was another passenger, died as well. A throng of paparazzi on motorcycles had been chasing their vehicle just minutes before the driver lost control and crashed. An investigation later revealed that the driver was under the influence of alcohol and prescription drugs, and the paparazzi didn't cause the crash. 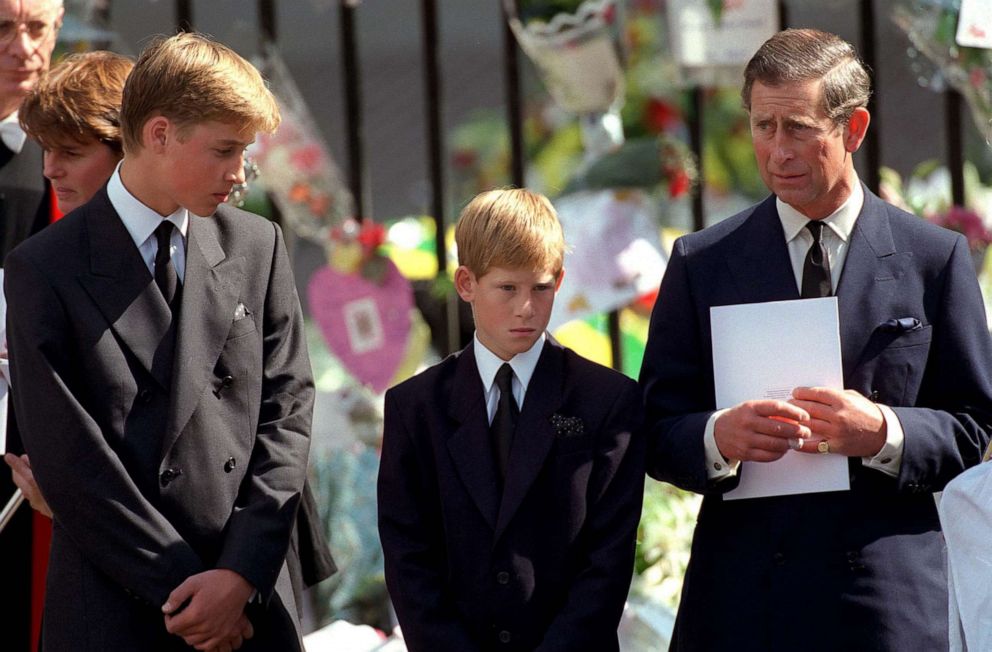 Anwar Hussein/WireImage via Getty Images, FILE
The Prince of Wales with Prince William and Prince Harry outside Westminster Abbey at the funeral of Diana, The Princess of Wales on September 6, 1997.

In 2005, Charles married Camilla, who became known as the Duchess of Cornwall. The couple live together in Clarence House, a British royal residence on The Mall in London, according to the royal family's official website. However, they are expected to move into Buckingham Palace now that he is king.

Charles and Camilla, 75, are also expected to be coronated side-by-side, per Elizabeth's request that Camilla become queen consort -- the title given to the wife of a reigning king.

Charles has five grandchildren by both of his sons.

As the longest-serving prince of Wales, Charles had spearheaded a number of initiatives and charitable work over the years, with a particular focus on global sustainability. 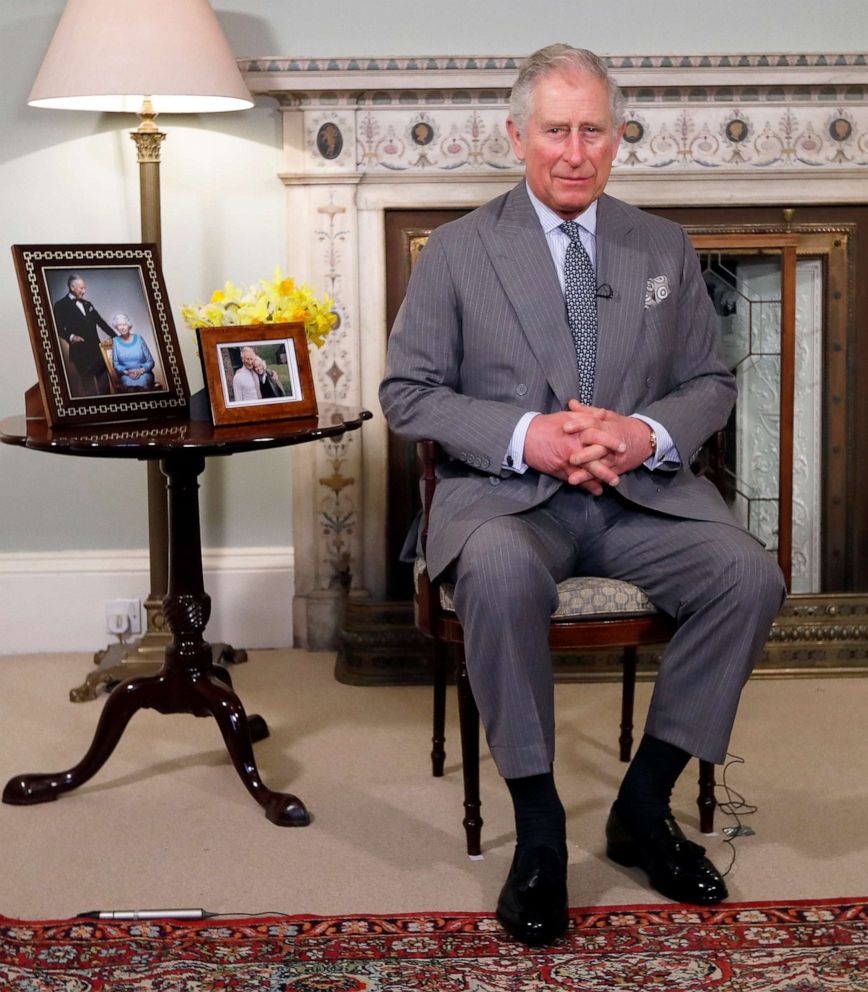 Kirsty Wigglesworth/AP, FILE
In this photo taken on Thursday, March 15, 2018, Prince Charles looks on ahead of delivering his Easter message at Clarence House in London.

For instance, he started an initiative in 2007 called "Mosaic," which offers mentoring programs to young people growing up in deprived communities. He also launched the "Campaign for Wool" in 2010 to promote awareness of the environmental benefits of wool and expand the market for British sheep farmers who are struggling to make ends meet.

Charles also took part in various sports including horse racing, sailing and scuba diving. He raised money for charity by playing polo up until late 2004, when he decided to retire from the game after playing it for more than 40 years, according to a biography on the prince's official website.

In his spare time, Charles likes to paint. Lithographs of his artwork are for sale and all proceeds go to The Prince of Wales's Charitable Foundation. He also enjoys gardening and hedge-laying, especially in his organic garden at Highgrove House, his residence near Tetbury in Gloucestershire.