Alex Morgan and Megan Rapinoe, two stars of the U.S. Women's National Team, say the team plans to appeal a federal judge's decision to throw out their unequal pay claim in the more than $66 million lawsuit against the United States Soccer Federation.

"This decision was out of left field for us. I think for both sides it was very unexpected," Morgan said Monday on "Good Morning America." "We will definitely be appealing and moving forward, if anyone knows anything about the heart of this team, we are fighters and we will continue to fight together for this."

The USWNT players, including Morgan, who is personally named in the decision, alleged in their lawsuit that the United States Soccer Federation violated the Equal Pay Act and Title VII of the Civil Rights Act of 1964. U.S. District Judge R. Gary Klausner disagreed on the former in his ruling filed Friday in Federal District Court in Los Angeles.

MORE: Judge throws out unequal pay claim made by US women's national team

"[The] history of negotiations between the parties demonstrates that the [women's national team] rejected an offer to be paid under the same pay-to-play structure as the [men's national team], and that the WNT was willing to forgo higher bonuses for other benefits, such as greater base compensation and the guarantee of a higher number of contracted players," he wrote. "Accordingly, Plaintiffs cannot now retroactively deem their [collective bargaining agreement] worse than the MNT CBA by reference to what they would have made had they been paid under the MNT's pay-to-play structure when they themselves rejected such a structure." 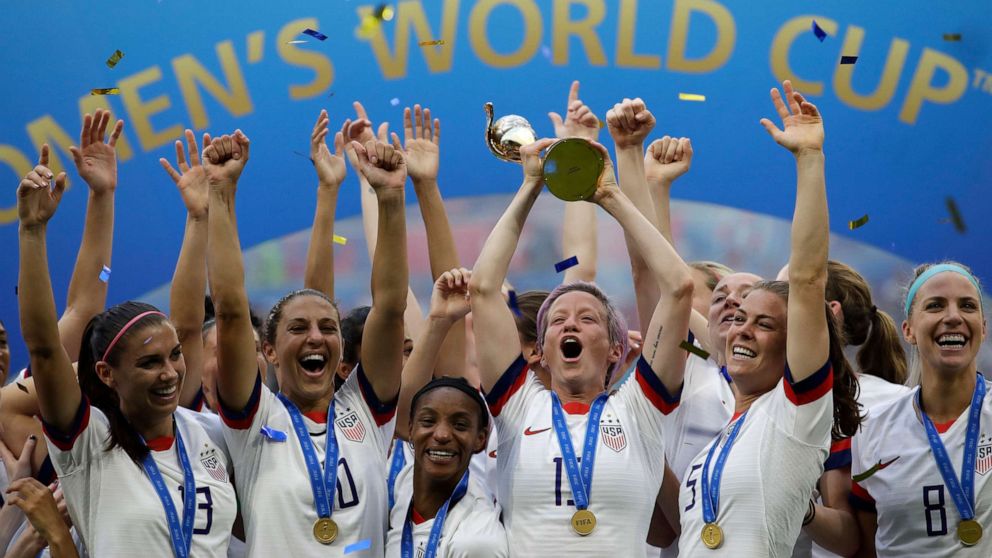 Alessandra Tarantino/AP, File
In this July 7, 2019, file photo, United States' Megan Rapinoe lifts up a trophy after winning the Women's World Cup final soccer match between US and The Netherlands at the Stade de Lyon in Decines, outside Lyon, France.

Rapinoe, named the FIFA women’s player of the year for 2019, described herself as "very shocked" by Klausner’s ruling.

"If we were under the men’s contract, we would be making three times more," Rapinoe said Monday on "GMA." "In that time that we’ve made just a little bit more, we’ve won two World Cups and we’ve won just about every single game that we’ve played in, so the rate of pay is just so different." 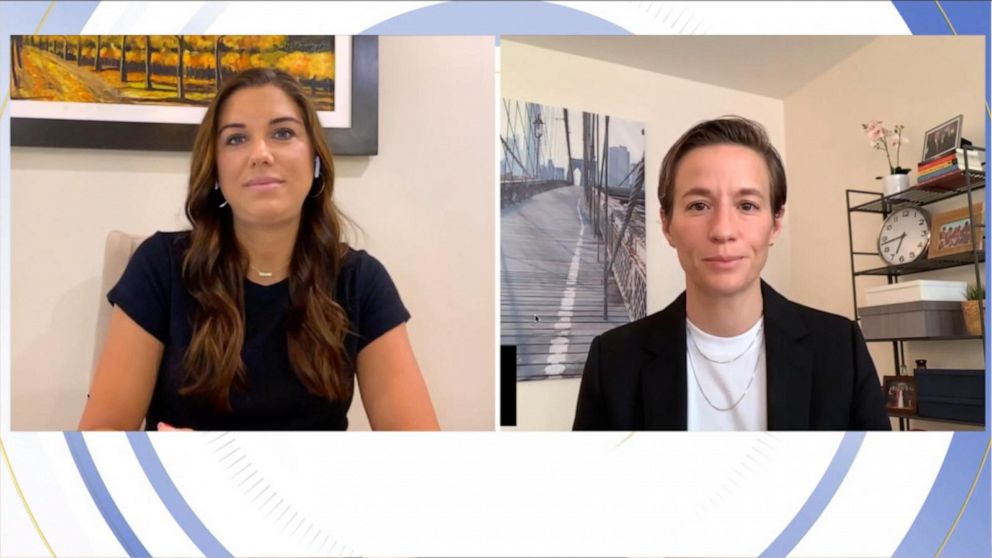 The women's national team won the World Cup in 2015 and 2019, and last won the Olympic gold in 2012. Due to the postponement of the Tokyo Olympic Games over COVID-19 concerns, the team will not get a chance to show if it can reclaim the top spot on the Olympic podium until at least 2021.

While throwing out the equal pay claim in the lawsuit, Klausner said he will allow the players' allegations of discriminatory hotel and flight accommodations, training support services and medical support services to stand.

"This is definitely a hurdle in the road but it’s nothing that’s going to stop or deter us from what we have always been true to, and that’s true equality in the sport," Morgan said. "We are still feeling optimistic and we’ll get through this."

Although disappointing to hear this news, this will not discourage us in our fight for equality. https://t.co/s1VWfF2IG0

Molly Levinson, a spokeswoman for the players, told ABC News in a statement Friday that they are "shocked and disappointed with today's decision."

“We will not give up our hard work for equal pay. We are confident in our case and steadfast in our commitment to ensuring that girls and women who play this sport will not be valued as lesser just because of their gender," she said. "We have learned that there are tremendous obstacles to change; we know that it takes bravery and courage and perseverance to stand up to them. We will appeal and press on. Words cannot express our gratitude to all who support us.”

The United States Soccer Federation said in a statement, "We look forward to working with the Women’s National Team to chart a positive path forward to grow the game both here at home and around the world. U.S. Soccer has long been the world leader for the women’s game on and off the field, and we are committed to continuing that work to ensure our Women’s National Team remains the best in the world and sets the standard for women’s soccer."

A trial has been set for June 16 in Los Angeles.