By Kennedey Bell
Video by Elisa Tang
Share —
Sign up for our newsletters to get GMA delivered to your inbox every morning!

At first glance, Darnell Atkins looks far from your average nail technician. Donning a mosaic of tattoos and rocking jet black nails, this manicurist is shaking up the nail industry one appointment at a time.

The 29-year-old Navy veteran, widely known on social media as Nen10doe, has accumulated more than 40,000 followers on Instagram and garnered thousands of interactions on Twitter, where he documents his daily nail journey. 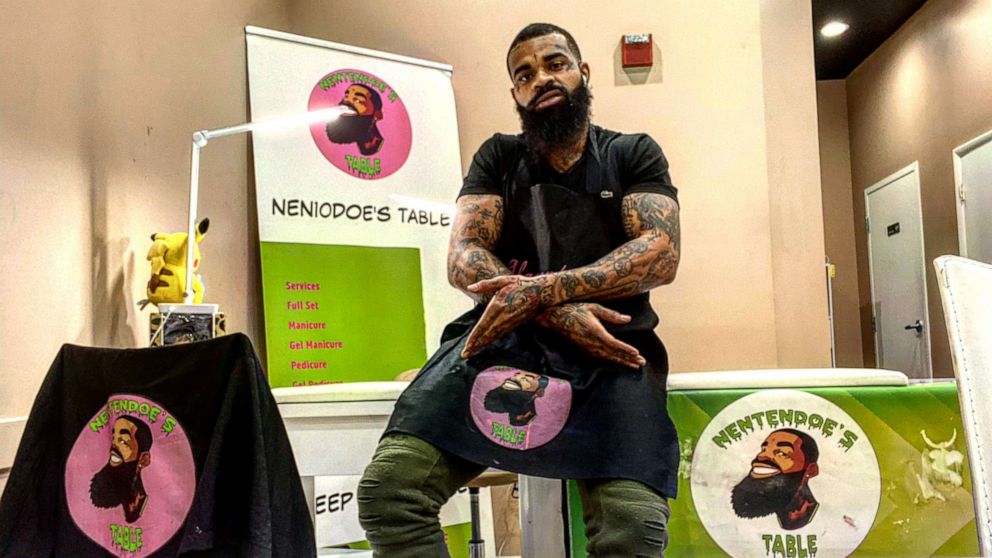 According to a 2018 study from the University of California, Los Angeles, 81% of nail salon workers are women. The same study indicates that only 2% of nail technicians in the U.S. are Black.

"Not only is he breaking social norms, but he is redefining the way we look at the beauty industry," said Roxanne Lloyd, a fellow nail technician and Atkins' friend.

MORE: No nail salon? Here's how to remove your gel manicure at home

Atkins said he developed an appreciation for self-care early in life when his mother took him to get manicures and pedicures. Having his nails groomed at the age of 13 made him feel like "a cut above the rest" when it came to impressing girls, he said.

"When we think of nails, as men, we think it's just all for women. We miss the ideology that comes with understanding the health of the nails," Atkins said. "Once we start to understand the role that nails play [for] men, then we'll probably have a better understanding of the services."

Years later, his self-care habit has resurfaced and his career path has led to the creation of Nentendoe's Table, Atkins' own nail business.

Referring to himself as a proud nerd, Atkins said the name Nen10doe originated from being confident in his quirky interests throughout his childhood. He said that as a child, he gravitated toward video games while most of his peers turned to sports.

"That [name] was just me identifying with always being myself because I just knew no one was more qualified to be me," he said.

Breaking into the nail industry was the last resort for Atkins after he received an other-than-honorable discharge from the Navy in 2013, a result, he said, of his former addiction to synthetic marijuana. He said the period following his release was one of the lowest points in his life as he struggled to secure a corporate job.

Atkins' life changed the day he approached a Black-owned nail salon, where he hoped to receive some self-care amid his hardships. On that day, Atkins said his signature style of black nails was born. 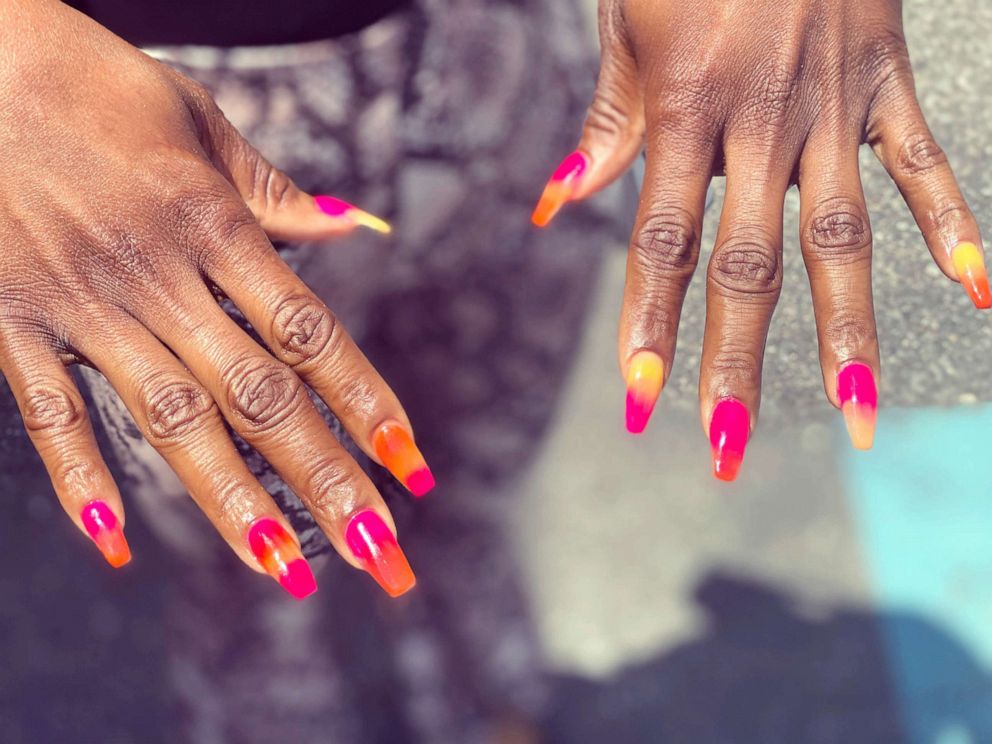 "I paid the $70 and I had them paint my nails all black because I wanted to get the full experience," Atkins said.

Shocked by the price of their services, he was eager to learn more about the nail industry. That day, he picked the brain of a manicurist and arranged to take classes with her on the basics of laying acrylic on nails.

The next day Atkins arrived at the shop "incognito," wearing a hood over his head for his training. He said he was fearful that he would receive harsh criticism from his peers.

Atkins said many clients were taken aback by his looks and demeanor when he started. He said it was difficult for people to process that he was a manicurist, but in return, it helped him improve his work ethic along the way.

"Did it discourage me? No, because I knew for a fact that type of stuff was going to happen," he said. "But if I would have let it affect me, I honestly wouldn't be where I am now."

Atkins said establishing rapport and creating bonds with his clients is what ultimately allowed them to see past his sex and appearance.

"The thing that kept me going with it was I just knew for a fact I didn't fit in here. I knew I wasn't supposed to be here, but it felt good to be here and it feels good to flourish," Atkins said.

Lilo Lee, one of Atkins' clients, told "GMA" she has been a customer since Atkins first started doing nails.

MORE: Are nail strips the secret to the perfect mani?

"He's just very consistent and his work is perfect. I wouldn't allow anybody else to touch my hands or my feet," Lee said.

Like many manicurists, Atkins' career was in jeopardy when the COVID-19 pandemic struck the nation. He quickly seized the opportunity to service what he calls an untapped market -- house calls and one-on-one appointments. 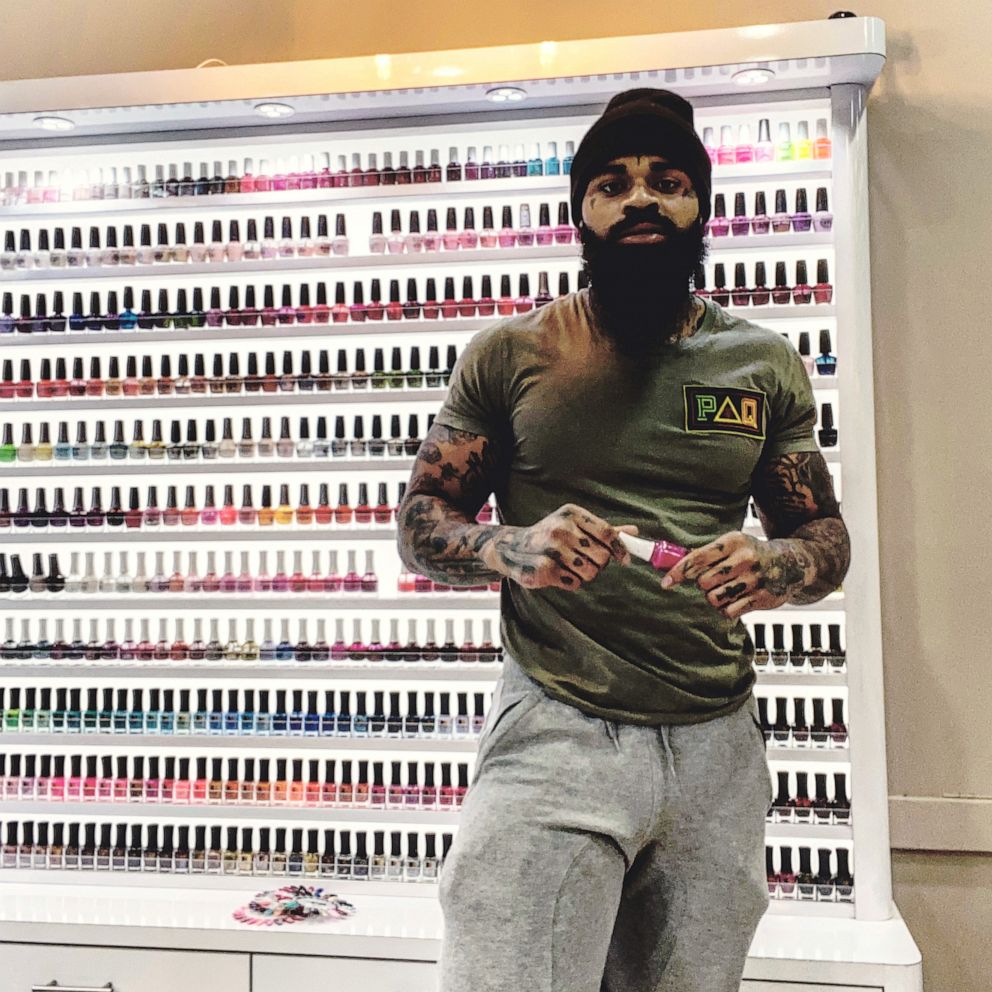 Courtesy Darnell Atkins
Atkins poses in front of a wall of nail polish at his former salon.

Atkins said he attributes his success to remaining consistent and confident in his craft regardless of judgment from his family and peers.

He said he believes other aspiring Black entrepreneurs can achieve success in starting a business through exploring opportunities that appear unconventional to them.

"For any entrepreneurial mind that needs some inspiration, find things that aren't normal and I guarantee you'll find promising success in it," he said.

Atkins said his ultimate goal is to create the best top coat polish on the market. Through his branding, he said he aspires to become a household name.