By Clayton Sandell
Share —
Sign up for our newsletters to get GMA delivered to your inbox every morning!

It’s hard to think Star Wars without thinking about toys. Since the moment the first movie hit the big screen, millions of action figures, toy space ships and lightsabers have fueled millions of imaginations.

But what if you actually lived in that galaxy far, far away? What would the toys made there look like? 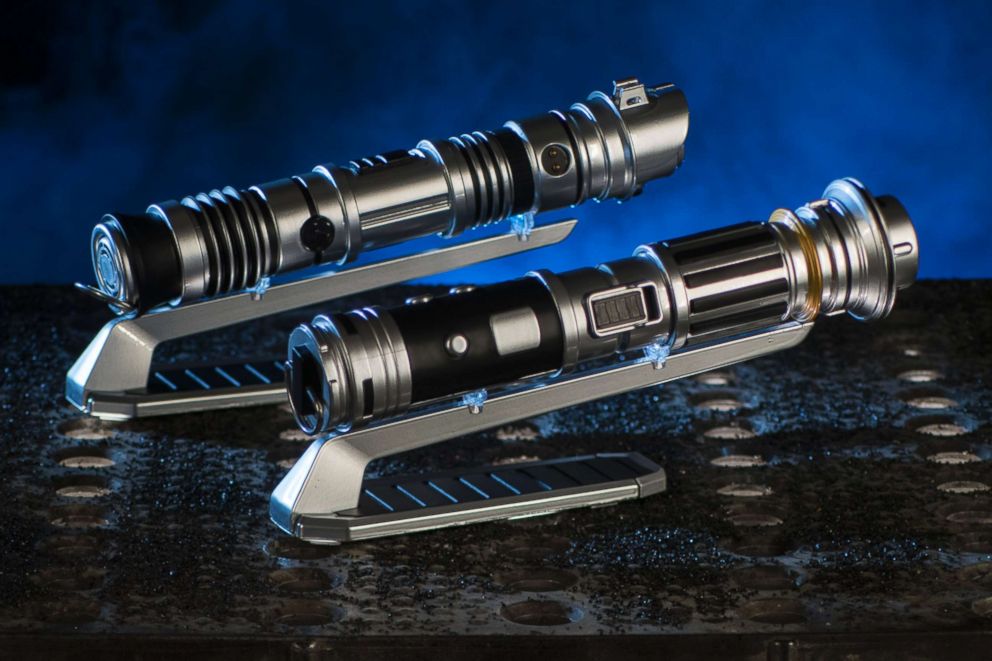 David Roark/Disney Parks
At Savi's Workshop - Handbuilt Lightsabers in Star Wars: Galaxy's Edge, guests will be able to build their own lightsaber, guided by ancient wisdom but crafted by the choices they make on their own adventure. Each build will begin with a personal connection to a kyber crystal used to ignite the custom lightsaber.
(MORE: 'Fem-splaining' 'Star Wars': Docu-series dives into female sci-fi fandom)

It’s one of the unique creative challenges for Star Wars: Galaxy’s Edge, the twin 14-acre attractions coming this year to Disneyland and Walt Disney World that don’t just celebrate Star Wars but strive to make it 100 percent real. Galaxy’s Edge takes place in a smuggling port known as Black Spire Outpost on the remote planet of Batuu.

Part of making the experience believable means the idea of steering guests into a typical gift shop as they exit a ride, as in other Disney attractions, is gone. 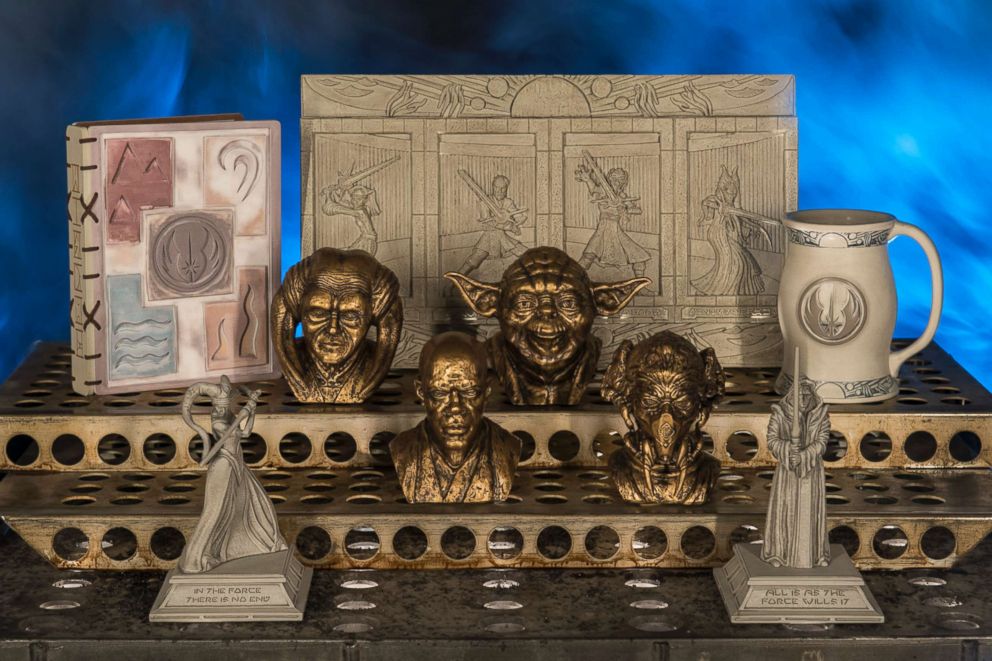 “The merchandise in the shops won’t be in cardboard boxes that say ‘Disney’ on them. They’ll all be something that were organically found on the land,” says Bob Chapek, chairman of Disney Parks, Experiences and Products. “They’re one of a kind.”

In keeping with the planet’s carefully crafted story, you won’t find any T-shirts emblazoned with a Galaxy’s Edge logo either, or that Wookiee mask made famous by Chewbacca Mom. 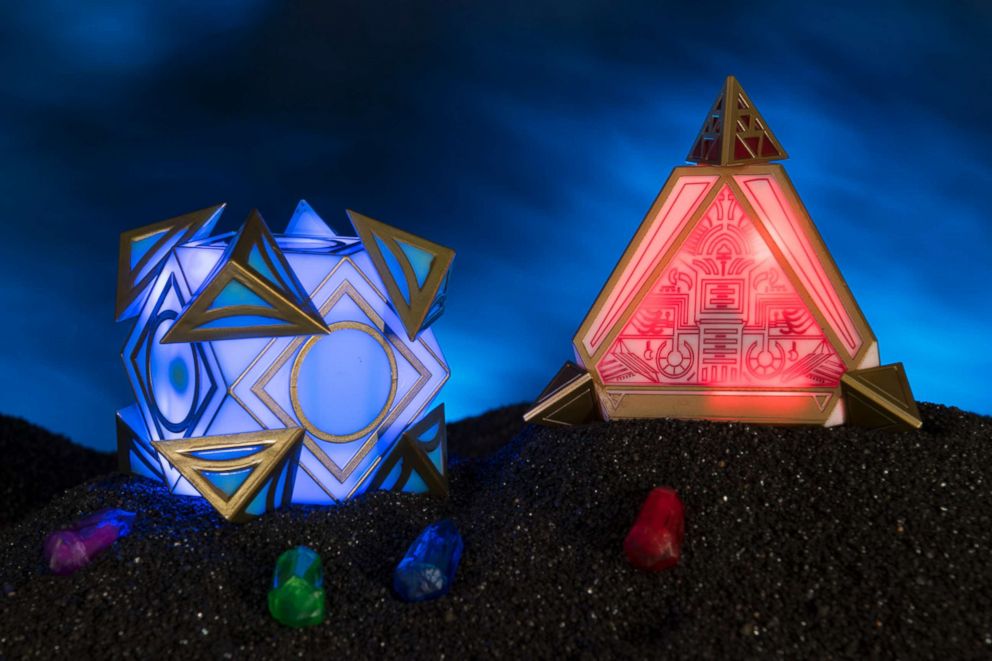 David Roark/Disney Parks
There are many rare and unique items to be discovered at Dok-Ondar's Den of Antiquities inside Star Wars: Galaxy's Edge. Holocrons, pictured here, are ancient repositories of wisdom. Jedi and Sith used them to record their teachings for future generations seeking to understand the mysteries of the Force. Kyber crystals can unlock additional content in both the Jedi and Sith Holocrons.
(MORE: Inside the visual effects of 'Solo: A Star Wars Story')

“You will experience retail in a way that only a character in a Star Wars film has ever been able to experience it,” says Brad Schoeneberg, director of Merchandise Strategy at Walt Disney World.

Guests walking the streets of Black Spire Outpost will discover a variety of marketplace stalls and shops.

Zabecca the Toydarian is an alien (think Watto from “The Phantom Menace”) running a shop that will offer action figures with a rougher, more artisan look and feel. You’ll find Rey, Finn, Chewbacca, Stormtroopers and a porg or two on the stands. 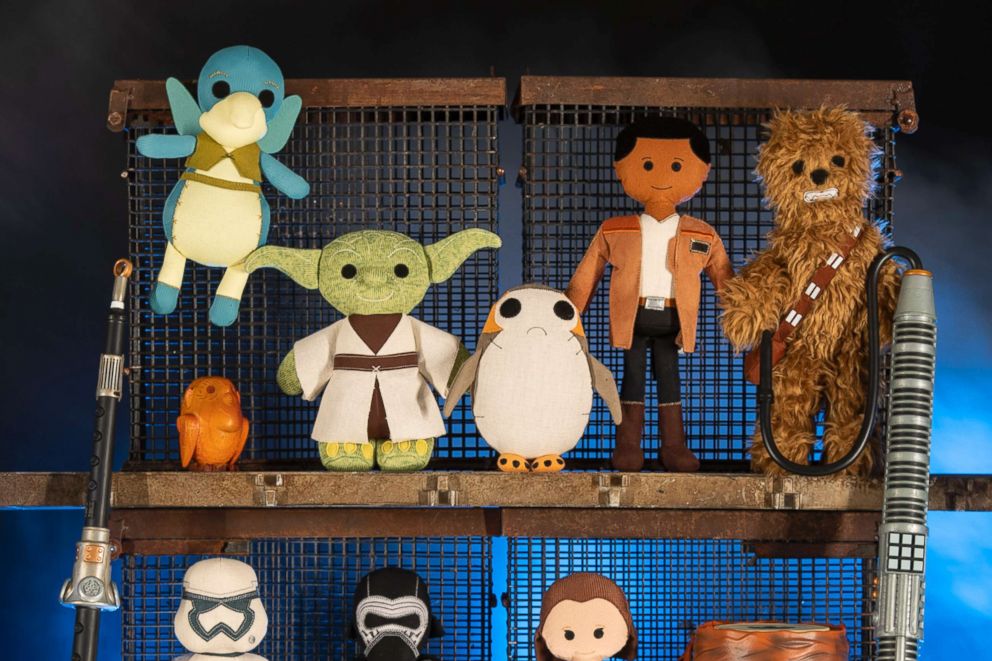 The Creature Stall will sell stuffed wampa and tauntaun creatures made famous in “The Empire Strikes Back,” as well as toy rathtars that mimic those tentacled rolling monsters known for swallowing up rival gangs in “The Force Awakens.”

In the Droid Depot, conveyor belts will carry the parts needed to build your own faithful astromech. You can mix and match the pieces you want to create a droid that looks like R2-D2 or BB-8. They can also be customized with chips that make them more interactive. 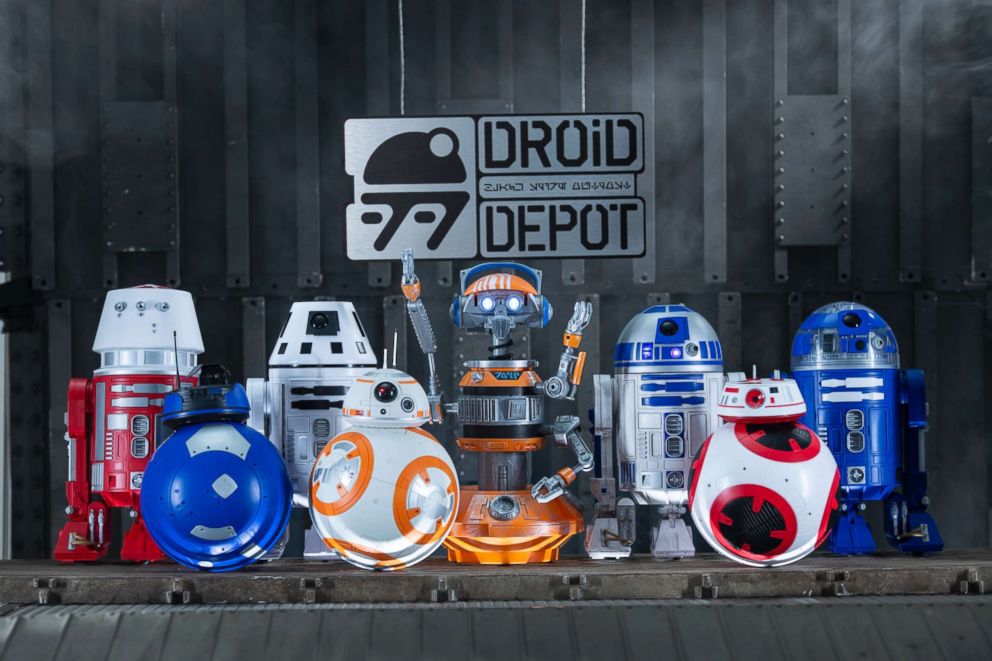 David Roark/Disney Parks
Disney guests visiting Star Wars: Galaxy's Edge will be able to stop by the Droid Depot to build their own R-series or BB-series droids that will act as a friend throughout the village of Black Spire Outpost.

“As you’re going through the land, they’ll actually receive signals and react differently depending on where you are in the world of Black Spire Outpost,” says Disney merchandiser Cody Hampton.

At Savi’s Workshop, guests can customize and build high-end lightsabers. There are four choices of Force-attuned “kyber” crystals to put inside that will determine the color of the blade: red, blue, green or purple. 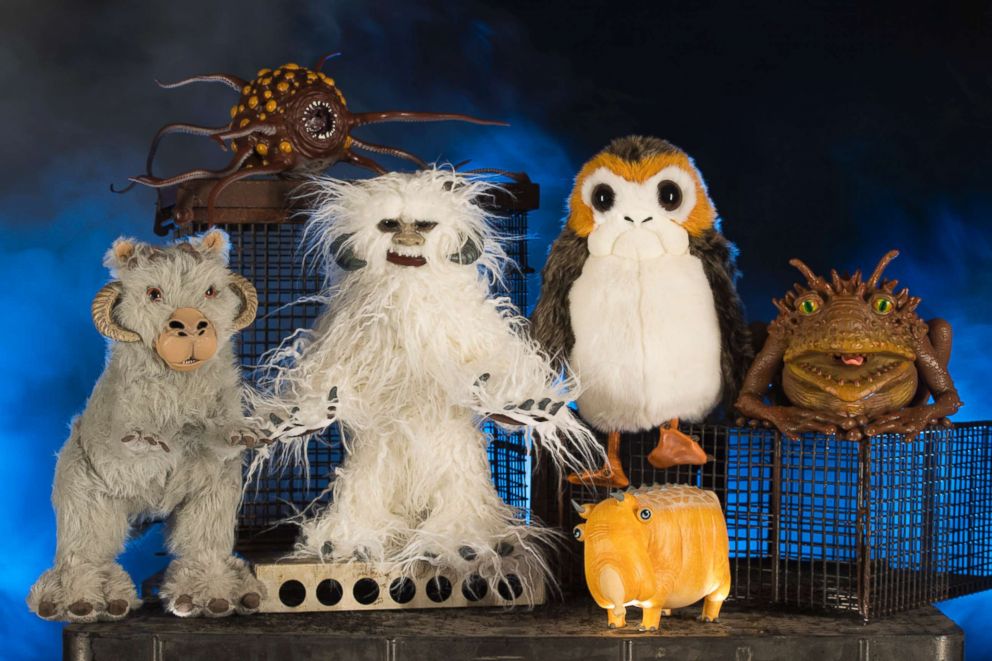 David Roark/Disney Parks
The Creature Stall in Star Wars: Galaxy's Edge will offer creatures of the galaxy, including porgs, tauntauns and more.

The items over at Dok-Ondar’s Den of Antiquities are said to be rare and mysterious.

“He has such a large collection,” says Walt Disney Imagineering Creative Producer Brian Loo. ”He no longer has to travel, because all of his clients come to him instead.”

Dok-Ondar’s offerings include Jedi and Sith holocrons, which only reveal their knowledge and wisdom to those skilled in the Force. 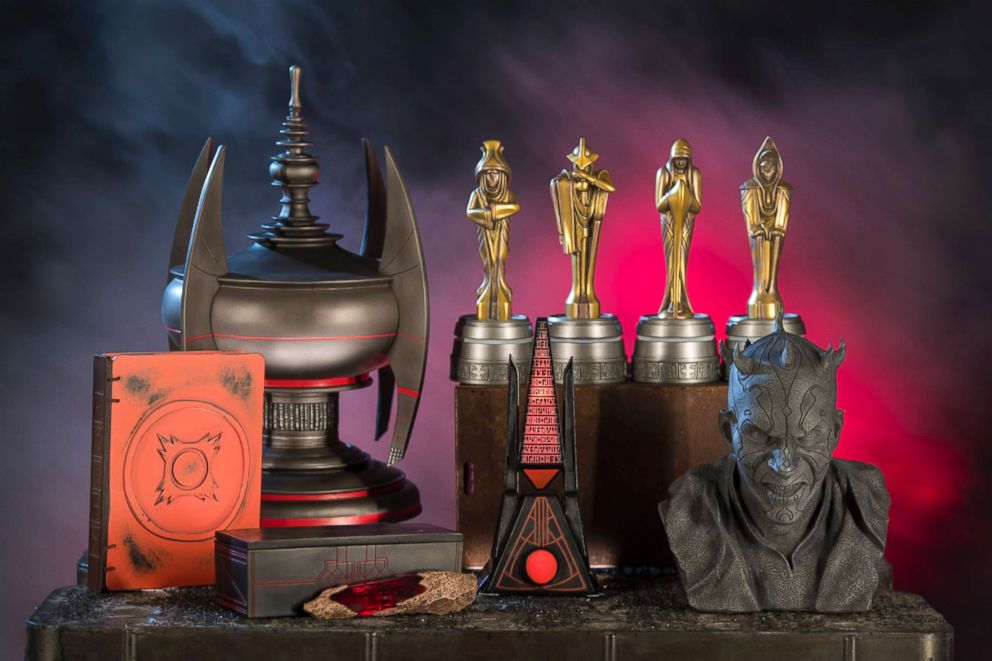 David Roark/Disney Parks
Dok-Ondar's Den of Antiquities in Star Wars: Galaxy's Edge will offer rare and unique items, including relics left behind by the Sith.

Guests to Black Spire Outpost will also find a couple of places to buy merch that lets them show allegiance to either the First Order or the Resistance.

Members of the First Order’s 709th Legion, known as the Red Fury, will operate a stall in a docking bay selling helmets, journals and waterbottles. On the opposite side of Black Spire Outpost, Resistance Supply will sell its own propaganda, including new pins, badges and hats. 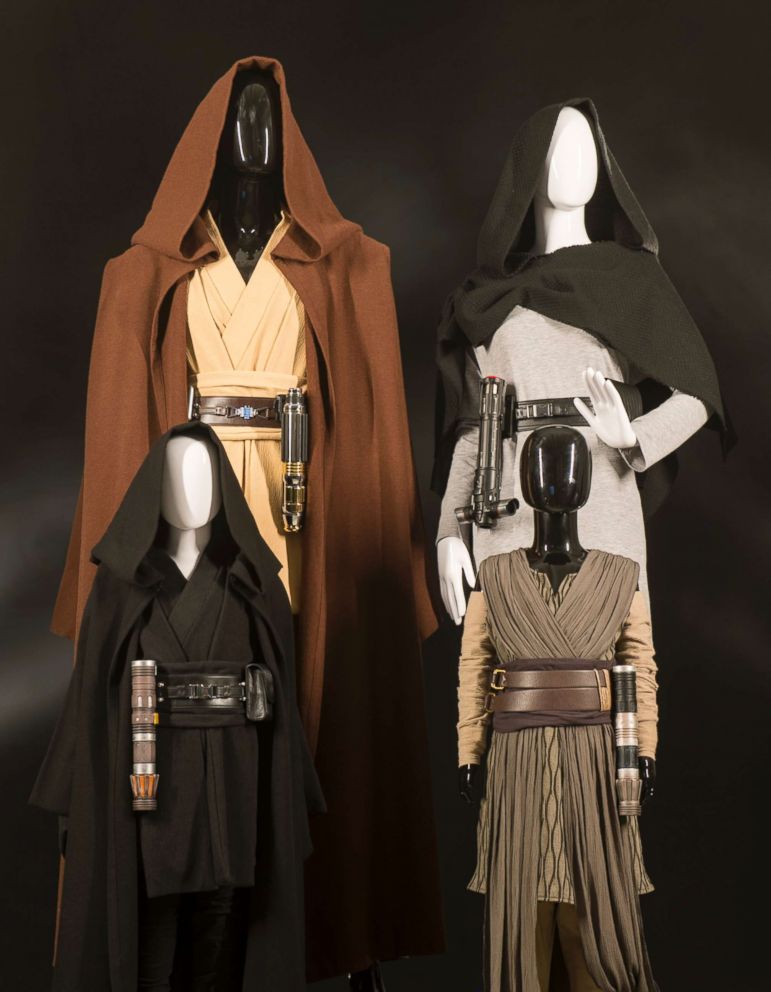 David Roark/Disney Parks
At Black Spire Outfitters inside Star Wars: Galaxy's Edge, guests will be able to mix and match clothing to create their own galactic style.

Droid and other toy prices are still being determined, Disney says. Star Wars: Galaxy’s Edge will open in the summer at Disneyland and later this fall at Walt Disney World.