From sayings like "mommy juice" and "rosé all day" to happy hours, drinking is part of American culture, particularly for women.

One thing that is less discussed though is alcohol's link to cancer, and how that impacts women.

"We're finding that probably anywhere between 5% and 10% of all cancers worldwide are due to alcohol use," Dr. Suneel Kamath, a gastrointestinal oncologist at the Cleveland Clinic Cancer Center in Ohio, told "Good Morning America." "It's something that we need to talk a lot more about."

MORE: 6 taboo facts women should know about alcohol and their health

In addition to potentially facing depression, liver disease and obesity, women who consume about one alcoholic drink per day have a 5% to 9% higher chance of developing breast cancer than women who do not drink at all, and that risk increases for every additional drink a woman has per day, according to the National Institute on Alcohol Abuse and Alcoholism.

One study published in 2019 found that women who were not at high risk for breast cancer based on family history increased their risk of breast cancer from moderate drinking.

For women, a moderate alcohol intake per week is defined as seven servings of alcohol or less, according to the Centers for Disease Control and Prevention, which advise women to have no more than one drink per day.

Heavy drinking is typically defined as consuming eight drinks or more per week, according to the CDC.

One serving of alcohol is just five ounces for wine and just one-and-a-half ounces for hard alcohol, far less than what is typically served in bars, restaurants and at home. 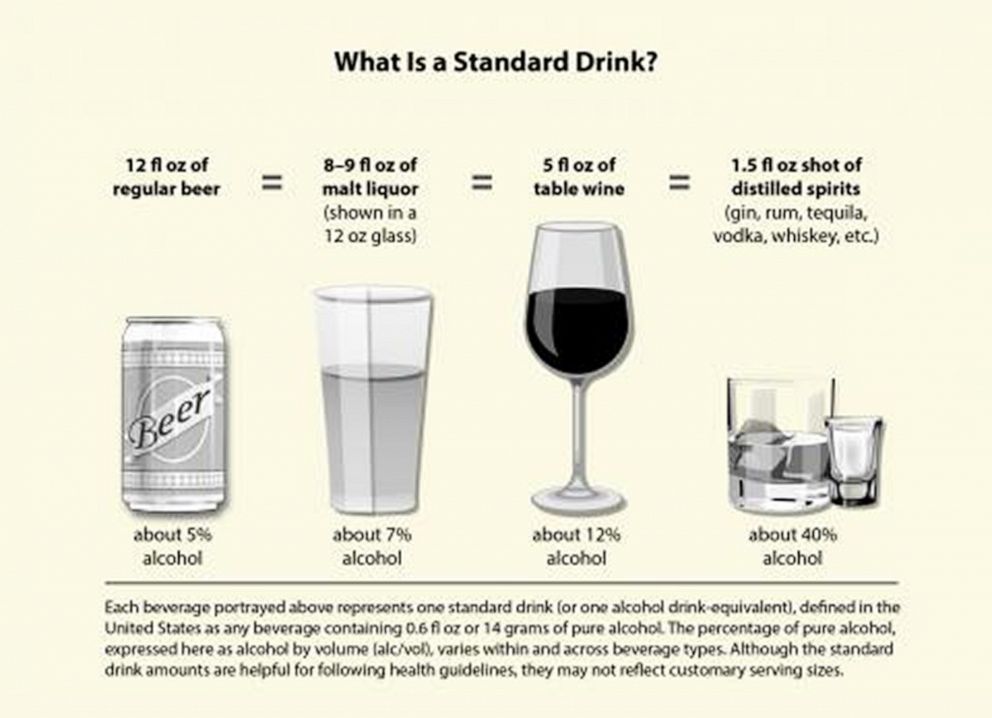 NIAAA
The National Institute on Alcohol Abuse and Alcoholism shares this graphic on how much alcohol a drink contains.

The data shows that even casual drinkers face a greater risk of cancer, most commonly liver and throat cancers but also colon and head and neck cancers, in addition to breast cancer.

"Over 100,000 cases of cancer a year were attributed to that type of drinking," said Kamath. "I think that's most surprising, that many of us really are comfortable with doing that and consider that to be very safe."

Drinking alcohol is listed by the Department of Health and Human Services as a known human carcinogen.

Women are more susceptible to alcohol-related heart disease than men; alcohol misuse produces brain damage more quickly in women than in men; women may be more susceptible than men to alcohol-related blackouts, or gaps in memory; and women who regularly misuse alcohol are more likely than men who drink the same amount to develop alcoholic hepatitis, a potentially deadly condition, according to the NIAAA.

"This is a perfect example of gender-specific medical differences," said Dr. Jennifer Ashton, a board-certified OBGYN and ABC News chief medical correspondent, explaining the difference lies primarily in enzymes that women lack to metabolize alcohol. "This is significant and we can't look at this, like so many other things in medicine, like it's one size fits all."

Liz Piscatello, 37, describes herself as a moderate, social drinker and said she is willing to put the reward of alcohol over the risk.

"I'm a firm believer that everything causes something, and you cannot live your life being scared," she said. "Live your life because you only live once. Tomorrow's not promised, so have fun while you can."

Kamath is among the medical experts warning though that the less alcohol intake the better for your health.

"What I recommend to people really is to limit alcohol intake as much as you can," he said. "The less you can do, the better."

According to Ashton, it is important that women be aware of the risks of alcohol and make a "deliberate choice" if they choose to consume.

"It's not the only thing that we do that can have negative effects," she said of alcohol. "It has to be a deliberate choice and we have to go into it with the awareness that we know, unfortunately, it's just not good for us."