From popular sayings like mommy juice, wine down, rose all day and happy hour to T-shirts that read "Mama needs wine," the marketing of alcohol towards women in America is omnipresent.

And while women have historically consumed less alcohol than men, that trend is changing, increasingly to the detriment of women's health, data shows.

The increases in alcohol consumption, binge drinking, and alcohol-related health issues are largely driven by women in their 30s and 40s. Over the past 20 years, as alcohol consumption among women has increased, the rates of death involving alcohol increased 85% among women, according to the National Institute on Alcohol Abuse and Alcoholism (NIAAA).

And this spring, amid the coronavirus pandemic, doctors across the country warned of anecdotal evidence showing increases in the number of hospitalizations and deaths caused by alcohol-related liver disease over the past year, particularly among young women. 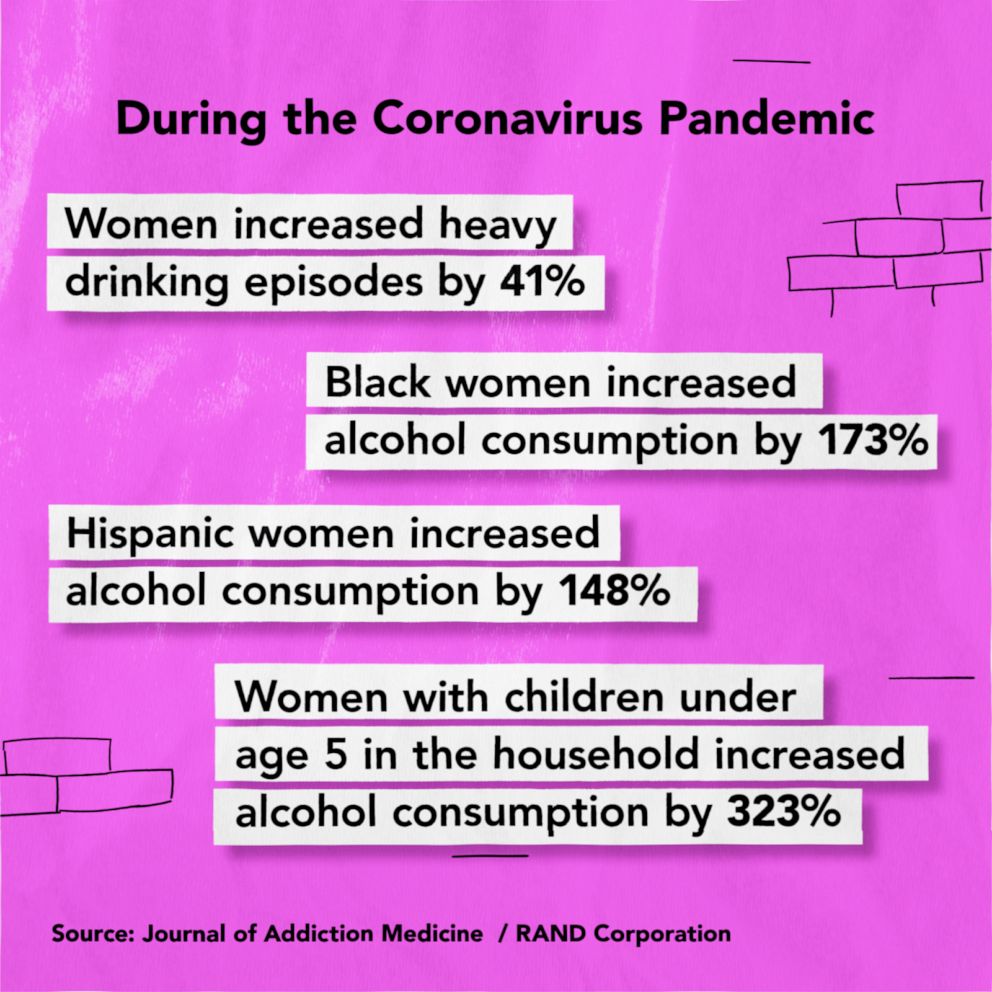 The increase in drinking among women comes as research shows that even one alcoholic drink per day can contribute to an increased risk of breast cancer for women. Women are also, research shows, at greater risk than men for health risks like alcohol-related cardiovascular diseases, liver disease and alcohol use disorder.

While the impacts of marketing and societal pressures have combined to make alcohol a common topic among women, talking honestly about how much they may be drinking and how it is affecting their bodies is still taboo, according to Dr. Jennifer Ashton, ABC News chief medical correspondent and a board-certified OBGYN.

"This is something that is really, really ripe with questions, emotions, myths, misconceptions, and unfortunately, stigma and taboo," said Ashton. "There is a taboo about alcohol for women that is oftentimes not spoken about at all, or if it is spoken about, it's whispered about."

"Alcohol is, in fact, a type of drug, and yet, it is socially acceptable in our country, in our society, in our culture," she added. "That can set up a potentially precarious situation, or relationship, for anyone." 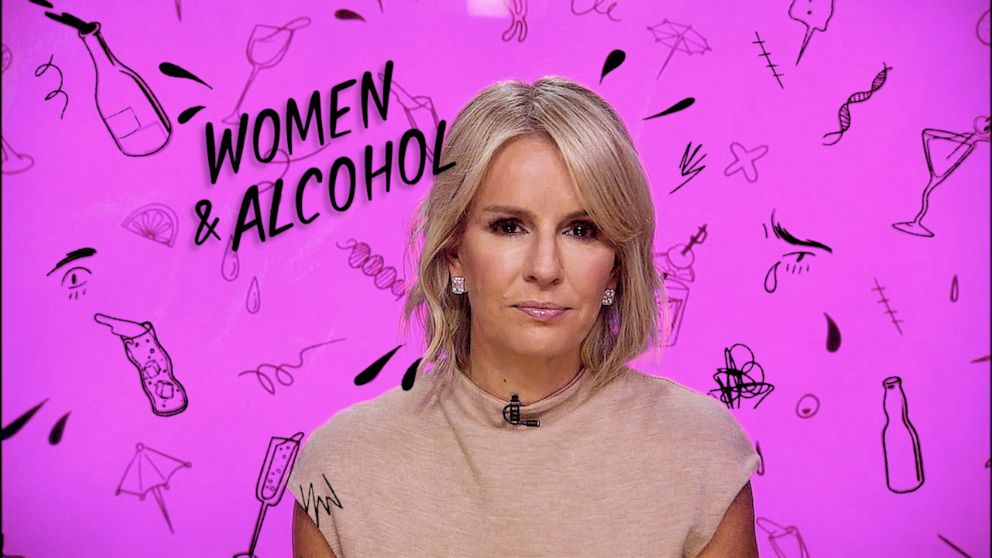 Here are six things women should know and talk about with their friends when it comes to alcohol, according to Ashton.

For women, a moderate alcohol intake per week is defined as seven servings of alcohol or less, according to the Centers for Disease Control and Prevention.

One serving of alcohol is defined as five ounces for wine and just one-and-a-half ounces for hard alcohol, far less than what is typically served in bars, restaurants and at home.

"You can do this experiment for yourself at home with water or wine, but let's start with water," explained Ashton. "You can take water, pour it into your wine glass to the amount that you think that you would serve yourself."

"If you were having a glass of rose, for example, and then pour that water into a measuring cup, chances are it is going to be significantly more than five ounces. It might even be twice that amount," she said. "So what you think is one drink, i.e., one serving, could actually be one-and-a-half or even two servings."

Ashton continued, "It doesn't matter whether it is one [alcoholic drink] a day or all on the weekends or spread out over a couple of days. If you're drinking let's say a margarita that's made with three ounces of tequila, because it's served in a giant, supersize, pretty glass, your seven drinks might actually be 21 drinks, 21 servings, and that qualifies as heavy alcohol consumption for a woman."

For women, even eight or more drinks qualify as heavy alcohol consumption. 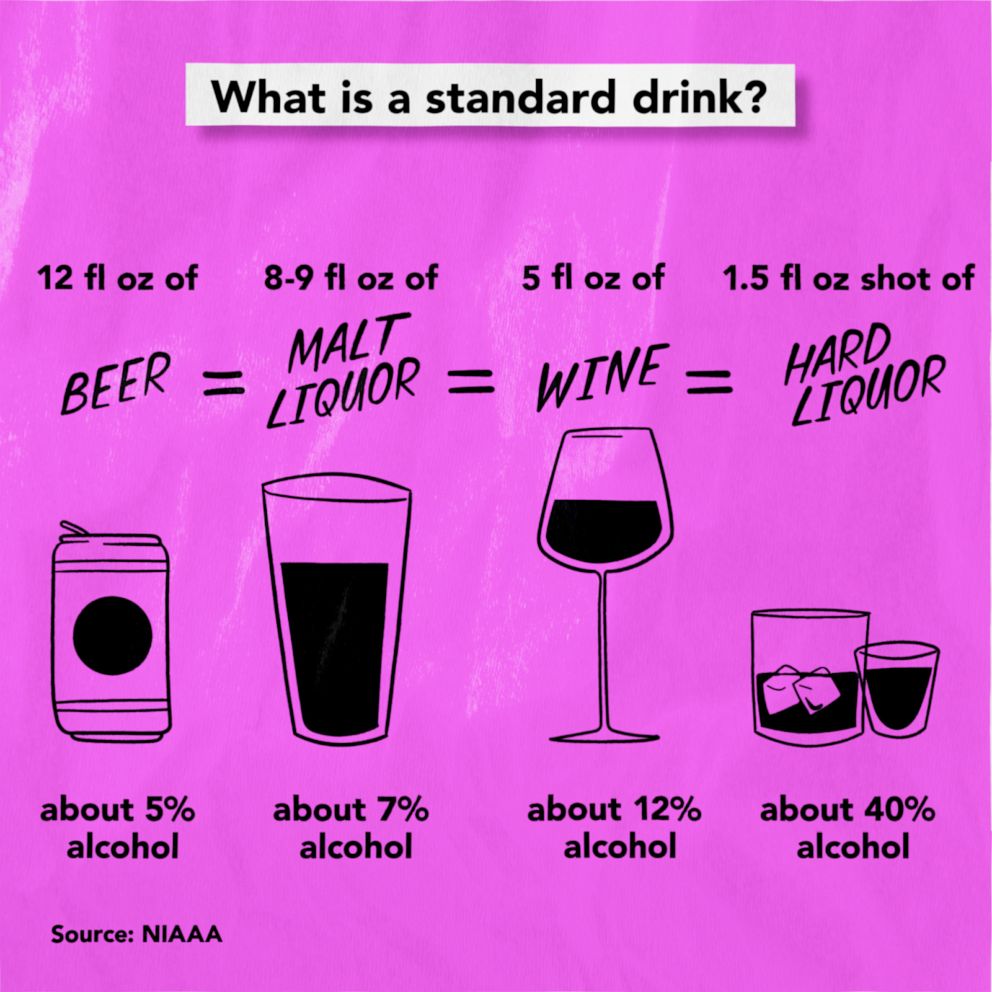 ABC News Photo Illustration
The National Institute on Alcohol Abuse and Alcoholism shares this graphic on how much alcohol a drink contains.

Ashton said that participating in Dry January -- not consuming any alcohol for the month of January -- for several years herself has taught her to keep a "mental tally" of the servings of alcohol she has per week.

"Now I kind of keep a mental tally of my servings per week so that I'm under that seven number that's recommended, or acceptable, in the medical literature for alcohol consumption for women," she said. "I just am aware of it very much like I would be aware of spending habits or my cardio exercise."

2. Drinking alcohol can cause cancer.

Drinking alcohol is listed by the Department of Health and Human Services as a known human carcinogen.

"That means it's known to be a contributing agent in the formation or development of various types of cancers," said Ashton, noting that those cancers include cancer of the esophagus, liver cancer, colon cancer and breast cancer.

MORE: I'm a mom who drank alcohol daily amid COVID-19. Here's what women need to know

Women who consume about one alcoholic drink per day have a 5 to 9% higher chance of developing breast cancer than women who do not drink at all, and that risk increases for every additional drink a woman has per day, according to NIAAA.

Men can drink double the servings of alcohol each week and still stay within the moderate alcohol intake limits because their bodies metabolize alcohol differently than women, according to Ashton.

"Generally, women are smaller, the body fat distribution in a woman is different and their metabolism is different," Ashton said. "So in general, two drinks for a woman could give you the blood alcohol level equivalent of one drink for a man."

"That's [why] it's important to take a gender-specific approach to this issue and not lump men and women together," she said.

4. The health effects of alcohol are worse than a hangover.

While women may talk or joke about the hangovers they have after drinking too much alcohol, what often goes unsaid, or even unknown, is what alcohol is doing inside their bodies.

Women are more susceptible to alcohol-related heart disease than men; alcohol misuse produces brain damage more quickly in women than in men; women may be more susceptible than men to alcohol-related blackouts, or gaps in memory; and women who regularly misuse alcohol are more likely than men who drink the same amount to develop alcoholic hepatitis, a potentially deadly condition, according to the NIAAA.

"We have to remember that almost anything, if done to excess, has the potential to be bad for us," said Ashton.

5. Not all women may safely consume alcohol.

For women especially, there are times in their lives when it is not medically safe to consume alcohol.

Women who should completely avoid alcohol are those who are under age 21, the legal drinking age, those who are pregnant and those taking medications that can interact negatively with alcohol.

When it comes to pregnancy, research has proven that any amount of alcohol intake at any point in pregnancy can be harmful, according to the CDC. Still, CDC data shows that as many as one in nine women report drinking while pregnant.

Doctors advise against drinking while pregnant because alcohol in the mom's blood passes through the umbilical cord to the baby and can cause everything from miscarriage and stillbirth and can increase the risk of fetal alcohol spectrum disorders which can cause physical, cognitive, and behavioral problems in children, according to the CDC.

Drinking during pregnancy is also associated with an increased risk of premature, or early, birth.

6. There are flags women can look for to know when drinking is too much.

"At this point, it's pretty well known that it was a strategic marketing campaign on the part of the alcohol industry to target women, in particular moms, to make alcohol consumption cooler, more hip, more current," said Ashton. "In terms of the medical, physical, psychological and societal implications of that, I think it's really up to women that we have to be able to look in the mirror and ask ourselves, 'Why am I reaching for this glass? Why am I reaching for this drink?'"

It's really up to women that we have to be able to look in the mirror and ask ourselves why am I reaching for this drink?

As a physician, Ashton said a red flag for her would be if a woman is answering that question all the time, "I feel so tense. I feel so stressed. I need it to help calm me down."

Another "glaring red flag" for Ashton is if women find themselves drinking alone, looking to drink in more covert or hidden or cryptic environments or in situations where they're hiding it from people.

For both of those red flag cases, Ashton suggests seeking medical help.

A "pink flag" for Ashton as a physician is if a woman answered the question of why she reached for an alcoholic drink by saying, "'Because I feel like I deserve it. Because it's been a tough year-and-a-half. Because it's just the low-hanging fruit for me, and it's better than doing something else."

"That may be a time to say, 'Is there something else going on emotionally, psychologically, in your environment, behaviorally, that could be targeted so that there are less potentially negative behaviors involved," she said.

The good news for women is that help is available, and it starts by talking about their drinking, be it with a doctor, with a friend, with a loved one or with a mental health professional, according to Ashton.

"I can't encourage women enough to speak up and seek help," she said. "It takes massive courage. It can be incredibly scary. But the health consequences will sneak up on someone who is consuming too much alcohol."

Describing the dangers of waiting too long to get help for drinking, Ashton continued, "Ultimately, it's like a marble rolling off the edge of a table. Once it gets to that edge, it's much harder to stop it."

If you or someone close to you needs help for a substance use disorder, call the Substance Abuse and Mental Health Services Administration (SAMHSA) National Helpline at 1-800-662-HELP (4357) or visit FindTreatment.gov, SAMHSA’s Behavioral Health Treatment Services Locator.