The impeachment trial of former President Donald Trump following the deadly Jan. 6 riot at the U.S. Capitol is providing a lesson on trauma for the country, experts said.

For some people, the trauma of that day is still raw and is being relived as they watch images and videos replayed during the impeachment trial. Others may have moved on with little or no trauma suffered from the siege, which left five people dead.

Even lawmakers who were on Capitol Hill that day have reported having very different experiences, as seen during senators' reactions to impeachment evidence and when Rep. Alexandria Ocasio-Cortez, D-N.Y., recounted her own experience in remarks on the House floor and in two widely viewed livestreams on Instagram.

Ocasio-Cortez's account was publicly questioned by Rep. Nancy Mace, R-S.C., in a debate that played out on Twitter.

This is a deeply cynical & disgusting attack, @NancyMace.

As the Capitol complex was stormed and people were being killed, none of us knew in the moment what areas were compromised.

You previously told reporters yourself that you barricaded in your office, afraid you'd be hurt. https://t.co/4FyWsaXSDx pic.twitter.com/7gW6yKO9gJ

The differing experiences are an important lesson for people in how individualized trauma can be, according to C. Vaile Wright, a clinical psychologist and senior director of health care innovation at the American Psychological Association.

"Different people can respond differently to different traumas," Wright told "Good Morning America." "Even though two people may have the exact same experience, their perceptions of it can vary based on their perception of how close they are to the threat, how in danger they are, and that's going to vary based on their own individual experiences."

Ocasio-Cortez revealed a very personal trauma when recounting her experiences during the Capitol insurrection.

"I'm a survivor of sexual assault," she said. "And I haven't told many people that in my life. But when we go through trauma, trauma compounds on each other."

Triggers for remembering or being victimized can be as seemingly insignificant as a smell or a sound, according to Wright.

"That's why people who have had previous traumas, when they are re-victimized, they are much more likely to have a negative response, to be more distressed," she said. "That's one of the things that makes somebody more vulnerable."

Understanding that each of our individual experiences is different is a critical tool for both empathy and healing, Wright noted.

"It's important for us as humans to understand that our experience is just our experience, that we can't really necessarily understand what other people are going through, and ideally that makes us less judgmental," she said. "To be able to put yourself in somebody else's shoes and to recognize, to empathize, that they could have experienced it differently, there's a lot of cognitive work that has to go into that."

"But it's critically important to support each other, to come together, to give ourselves our own space, to cut ourselves our own slack when we are having a hard time, but also to respect and help others even though their experience may be different than ours," Wright added. 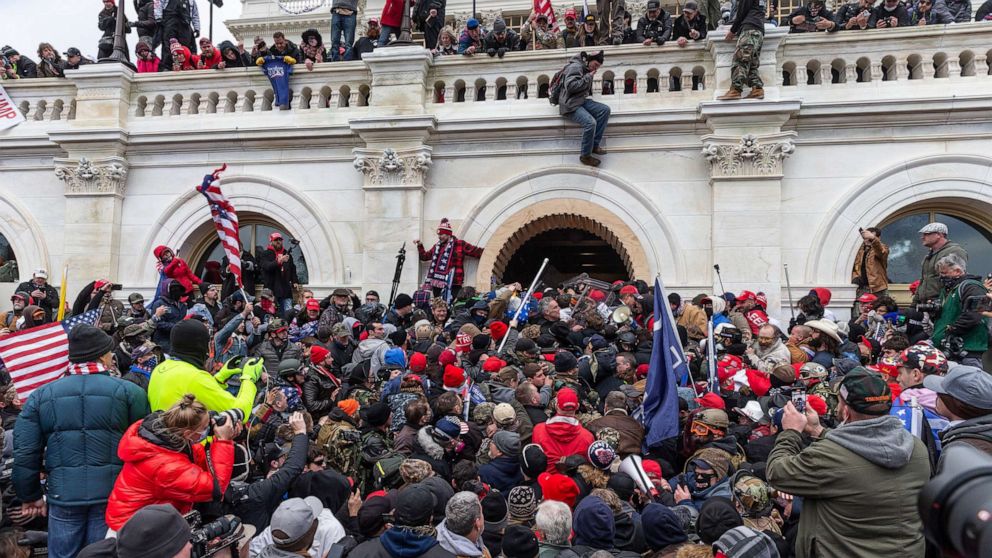 The impact of the Capitol breach on people's mental health is compounded by other issues people have faced over the past year -- the coronavirus pandemic and related economic hardship, racial unrest and related protests, and a divisive election and transfer of power, according to Alison Holman, a health psychologist and professor in the Sue & Bill Gross School of Nursing at the University of California, Irvine

"A growing number of collective traumas have occurred in America, and last year was an absolute avalanche of cascading crises for Americans to cope with," she said. "I think the Capitol riot has to be framed in an understanding that for the past few years, we've witnessed in America a growing amount of grievance and a growing amount of stress being expressed by the American population."

MORE: After deadly US Capitol breach, 5 tips to talk to kids and ease their anxiety

Holman added, "What we know from our research is that repeated exposures to traumas actually sensitizes people to have a stronger reaction to subsequent ones, so people's background lives, who they are and what they bring to the moment, is going to frame what they see."

And just as people experience and respond to trauma differently, they also respond using coping skills differently, so finding something that works for an individual is most important, according to both Holman and Wright.

Here are four tips from Holman and Wright to help cope with trauma and stress.

1. Set a time limit for the media you consume

"I think people feel compelled to watch, like if I'm not watching every single second of it I'm not taking this seriously. That's just not accurate," said Wright. "We don't need to continually expose ourselves to these negative images over and over again to care. We can still care while protecting our well-being."

"It's OK to take breaks from watching these certain images and engaging in these discussions," she said. "If what we're going for are effective, informed citizens, then we have to take care of ourselves too in order to be able to be that person."

2. Identify and use your best self-care practices

Keep a running list of self-care practices you know work for you so you can turn to it when you need a break, Holman said.

"What are the best coping strategies you've used in the past, what's helped you the most?," she said.

For some, going for a walk, getting fresh air, doing mindfulness-based stress reduction techniques, breathing exercises or identifying a person to whom you can reach out are very helpful.

"Not having a good sense of the future is very bad for mental health -- we know that from decades of research," said Holman, noting that uncertainty around the future is especially prevalent during the pandemic.

To help combat that, Holman recommends setting small goals every day, and breaking down bigger goals into attainable steps.

"Identify one small step toward something you want to achieve, and then give yourself a strategy to get to that goal," she said. "Taking small steps in the right direction is better than staying put and being paralyzed by the thought that you have no future."

4. Take care of your foundations

"At our foundation, it's really critical that we do things like get enough sleep, eat healthy, stay active and stay socially connected -- those four things," said Wright. "Because if you don't have that foundation, it can be really hard to be an effective problem solver, including the problem of, 'How do I cope?'"