Three people in California received lifesaving kidney transplants thanks to a unique three-way kidney donation in which three couples, all strangers, donated kidneys to each other.

"The first donor went into operating room at about 5 a.m. and about 90 minutes later, the first recipient went into another operating room and they donors and recipients continued to follow each other," Dr. Randolph Schaffer, transplant surgeon and director of the living organ donor program at Scripps Green Hospital, told "Good Morning America." "It was two rooms running for much of the day but in the end we had three happy , successful donors and three happy successful transplant recipients."

The three couples operated on in those two hospital rooms met for the first time on Jan. 21, when they all returned for their post-surgery checkups. 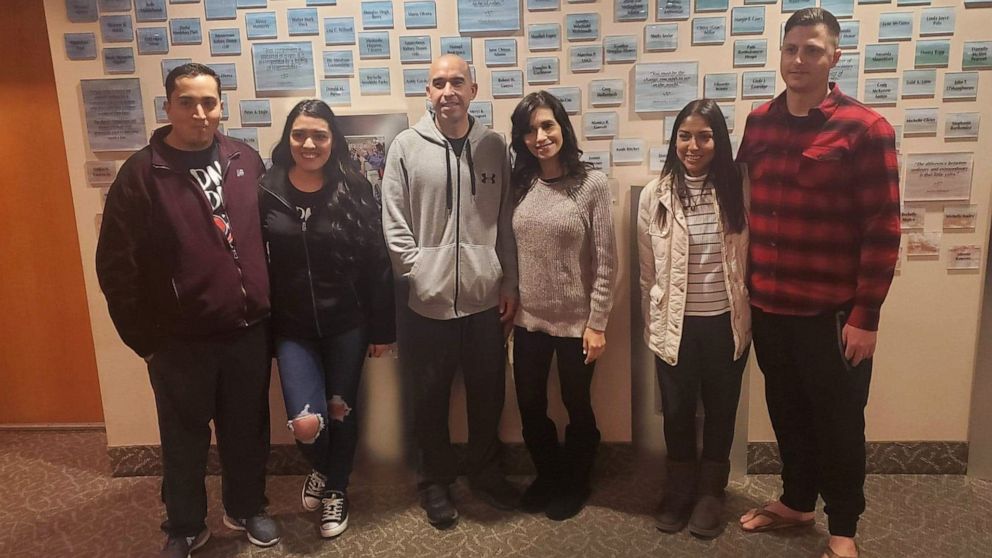 They exchanged hugs and said thank you to each other for the lifesaving gifts they'd received.

"It was amazing, a cool experience," said Jessica Lugo, a kidney recipient. "I really wanted to see who I got this beautiful kidney from."

Lugo, 31, of San Diego, California, had been on dialysis for the past five years after being diagnosed with a form of vasculitis that left her kidneys barely functioning.

Lugo had been on a kidney waiting list for several years. Her partner, Miles Compton, 33, was not a match for her, but he agreed to be part of a paired exchange in which he would donate his kidney so Lugo could receive a kidney.

Compton donated his kidney to Daniel Quintero, a 31-year-old from Riverside, California, who was born with just one kidney that deteriorated in function over time, necessitating a transplant. 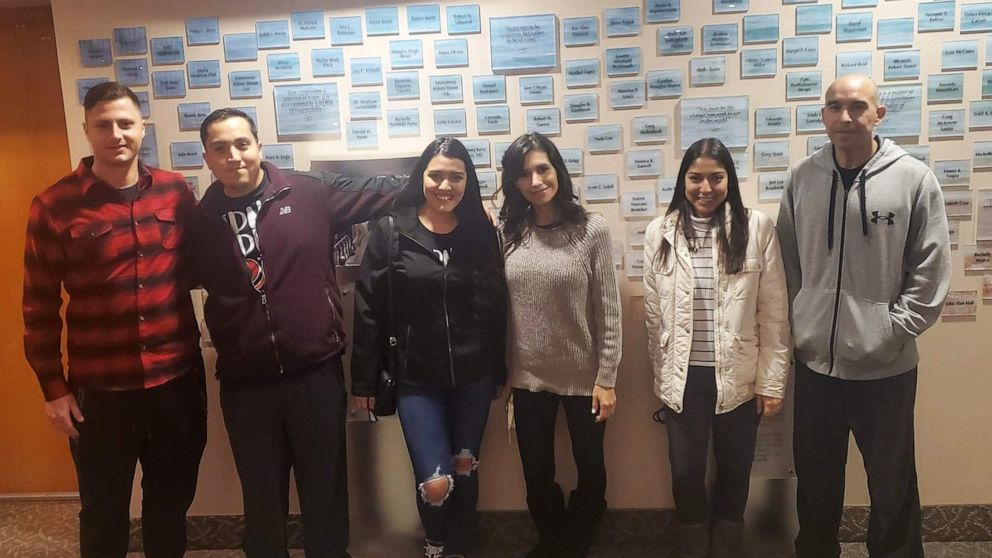 Quintero's fiance, Itzel Diaz, could not donate a kidney to Quintero because she was not a match. She was a perfect match though for Sandra Ponce, a 40-year-old mother of four who was diagnosed with lupus nine years ago and had been on dialysis for the past five years.

MORE: Baby who had 2 open-heart surgeries smiles for 1st time in hospital

In all, one half of a couple received a healthy kidney and the other partner donated a kidney to a stranger in order to help. 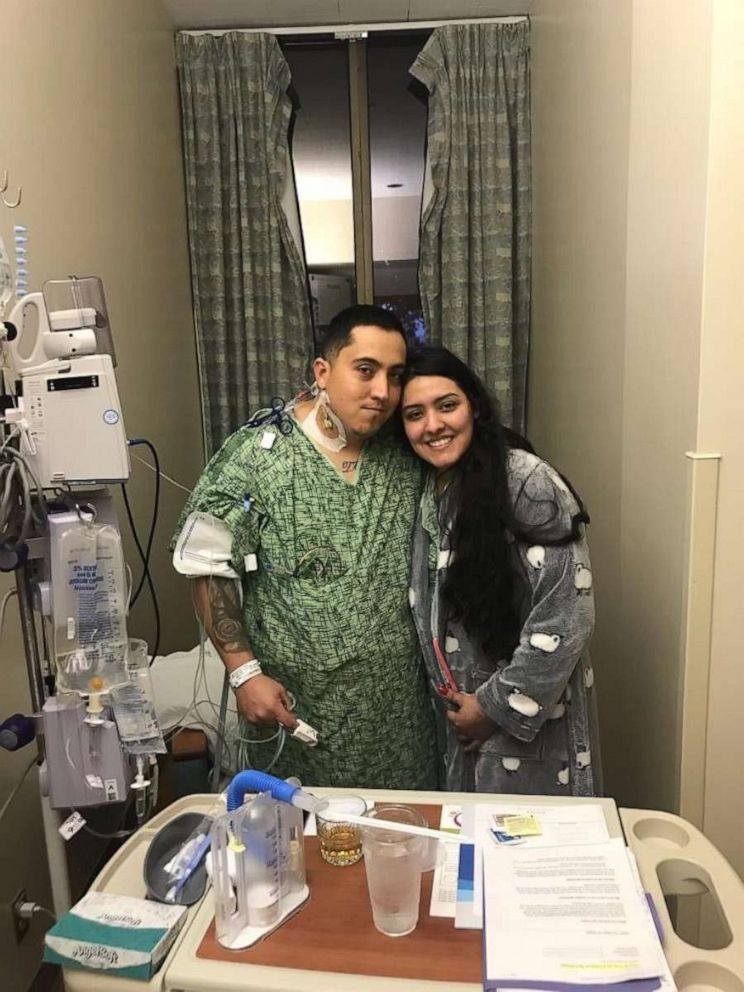 Each couple told "GMA" the three-way kidney donation has impacted them greatly, showing the goodness of complete strangers.

The night before the surgeries took place, Salvador Ponce said his 10-year-old daughter gave him a goodnight hug and told him, "Dad, you're a good man."

"Honestly, we did it, not for selfish reasons, but because we love our significant others," said Salvador Ponce. "The fact that we were all wiling to pair up and donate to someone else who was in need, I think that's what is special." 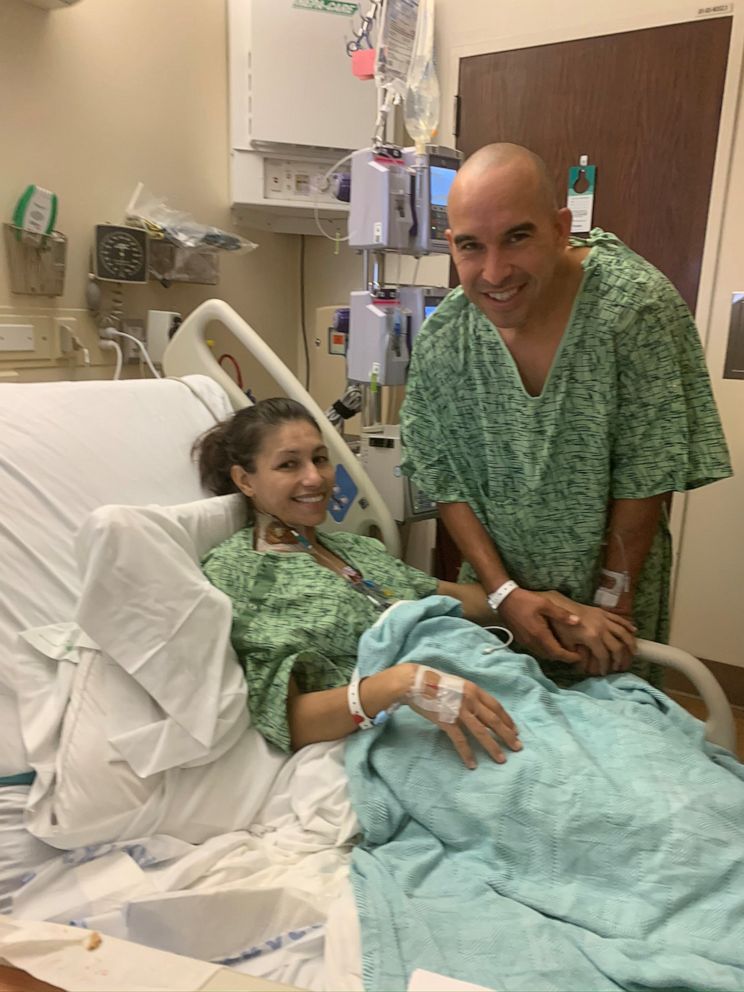 A kidney paired donation is defined as when "two or more pairs of living donors swapping to make a compatible match," according to the United Network of Organ Sharing (UNOS).

Making this particular three-way donation even more unique is the fact that all three couples were local, living only a few hours from each other at most, and all were being treated at the same hospital, Scripps Green Hospital, according to Schaffer.

All six of the surgeries were successful, with both the donors and the recipients leaving the hospital after just a few days.

The three couples have plans to get together at least once every year to celebrate what they call their "kidney-versary."