When the COVID-19 vaccine became widely available last year, it led to reports from some women of changes to their menstrual cycles after getting vaccinated.

Thanks in part to the persistence of women who spoke out on social media and documented their side effects in an online database created by two researchers, the National Institutes of Health (NIH) announced in August it was committing $1.6 million in funding to launch research studies at five universities across the country.

Now less than six months later, one of those studies, led by researchers at Oregon Health and Science University, formally documents what women described experiencing.

The study, published Thursday in the journal Obstetrics & Gynecology, found that vaccination can cause temporary changes to the timing of menstruation, with the typical experience being a period that's late by about one day after vaccination.

The effects were temporary, with a normal menstrual cycle returning within one or two months after getting the shot, according to the study, which evaluated the cycles of nearly 4,000 women who use Natural Cycles, an FDA-approved birth control app.

The study's lead researcher, Dr. Alison Edelman, professor of obstetrics and gynecology at Oregon Health and Science University School of Medicines, said the findings are important because they help affirm women's anecdotal experiences and let women know what to expect after getting vaccinated.

"On a personal level, any noticeable change to a person’s cycle – whether it be related to vaccination or other environmental stressors – can indeed feel significant," Edelman told "Good Morning America." "While reassuring, the study findings may also be validating to individuals who experienced menstrual disruption following vaccination."

"As a clinician, I can help provide them with information about what to expect with vaccination, which might include a slight variation in their cycle length and have them prepared for this possibility so that they do not need to worry," she said.

Edelman also reiterated that the study's findings do not mean the COVID-19 vaccine impacts current or future fertility.

"If an individual is avoiding vaccination due to the potential of menstrual disruption, these study results should be reassuring to them," she said. "In alignment with other previously published reports, there is no evidence to suggest that vaccines cause long-term impact to menstruation, fertility or pregnancy.

"In fact, contracting the COVID-19 virus can be devastating for pregnant individuals if unvaccinated. Therefore, the benefits of vaccine continue to outweigh the risks," Edelman added. 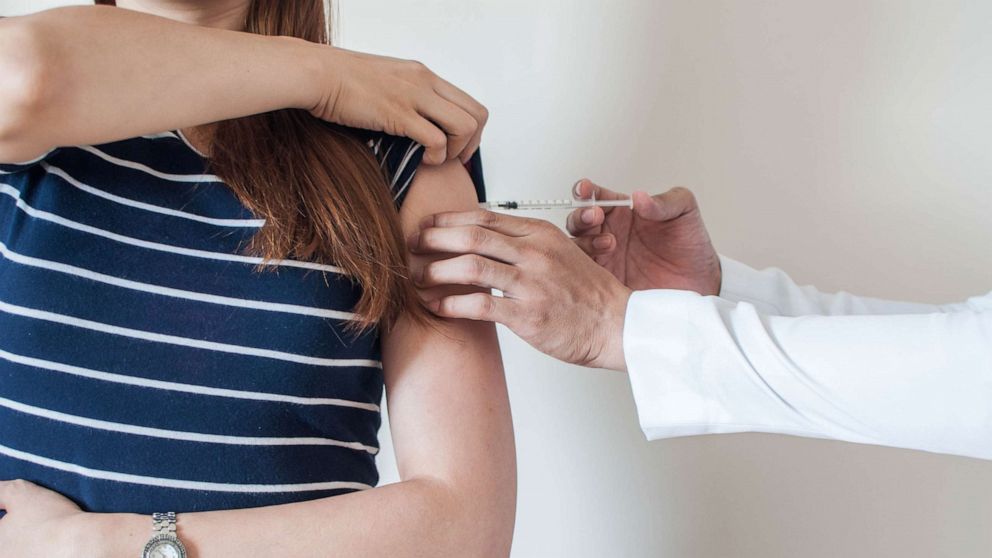 STOCK PHOTO/Getty Images
A woman is shown getting a vaccine.

Getting vaccinated produces a strong immune system response in the days following the shot, which may cause temporary changes to menstrual cycles. Studies have also documented temporary menstrual cycle changes among women who get COVID-19 infections.

Menstrual changes are controlled by a part of the brain called the hypothalamus, along with the ovaries, which use hormones as signals. These hormone signals can be disrupted when the body goes through changes that occur with an infection and even a vaccine.

Data on menstrual side effects was not widely collected during clinical trials for COVID-19 vaccines, which were conducted by the companies behind the vaccines, Pfizer and BioNTech, Moderna and Johnson & Johnson, Candace Tingen, Ph.D., program director of the Gynecologic Health and Disease Branch at the National Institute of Child Health and Human Development, told ABC News in September, shortly after the NIH's funding was announced.

MORE: After people spoke out about COVID-19 vaccines and period changes, research is underway

She said the NIH was motivated to fund research both from reports of menstrual side effects as well as the misinformation that followed around menstrual changes and fertility.

"There was a lot of misinformation out there, and NIH sees its mandate as countering misinformation with accurate information," Tingen said. "[Research] is something that we could do to step in and provide some real information about whether or not this is this is accurate."

Researchers are studying everything from menstrual cycle changes reported on period tracking apps like Clue to menstrual changes in women with endometriosis and women trying to get pregnant. They are examining how the vaccines may have affected flow, cycle length and pain, as well as exploring why COVID-19 vaccines may cause changes, according to Tingen.