One week after getting her first COVID-19 vaccine shot, Bernadette Ann Bowen said she started her period one day early.

Then, Bowen, a 31-year-old Ph.D. student at Bowling Green State University, said she experienced some of the worst menstrual cramps of her life.

"I started getting a headache and then started feeling cramps coming on," Bowen told "Good Morning America." "My nausea and abdominal pain became so severe at the peak of my cramps that I could barely stomach a few sips of water, as I laid there feeling like I was going to pass out from it all."

After Bowen saw people on TikTok discussing similar changes in their menstrual cycles after being vaccinated, she said she was "stricken with fear" over what could happen when she received her second dose of the vaccine.

"A lot of people I saw said their experience was after the second shot, so I was literally stricken with fear for a whole month wondering what would happen," she said. "I was so afraid that it would continue."

Bowen though, like most women who have reported menstrual changes after the vaccine, experienced only the one-time change to her period.

Nonetheless, she described it as "unacceptable" that people who menstruate did not know ahead of time that the vaccine may cause changes to the timing or severity of their menstrual cycles, even if temporary.

Not getting a single warning is unacceptable.

"Not getting a single warning is unacceptable," she said. "It would be one thing if we were given a single consideration, but just knowing the design of medicine is so biased that this wouldn’t have been reported as a warning, it’s telling."

Now, nearly one year after the COVID-19 vaccines began to be distributed in the U.S., the National Institutes of Health has committed $1.6 million in funding to "explore potential links between COVID-19 vaccination and menstrual changes," according a news release.

The funding, announced last month, comes as Pfizer booster shots are now authorized for high-risk Americans and adults over age 65. Dr. Rochelle Walensky, director of the Centers for Disease Control and Prevention, also added a recommendation for a third dose for people who are considered high risk due to where they work, such as nurses and teachers, both industries with largely female workforces. 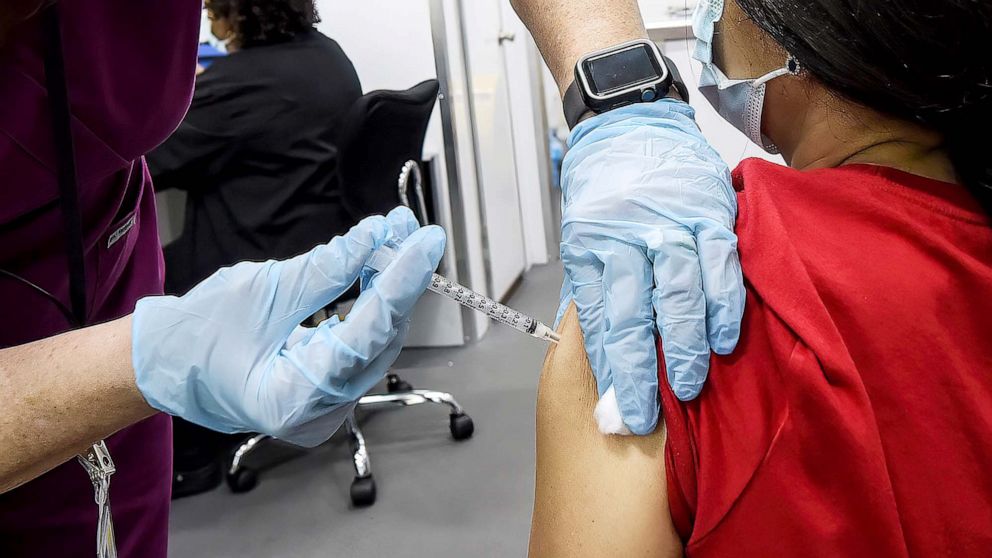 LightRocket via Getty Images, FILE
A nurse administers a dose of COVID-19 vaccine to a woman at a mobile vaccination event at the downtown campus of the University of Central Florida and Valencia College in Orlando, Fla., July 24 ,2021. Florida leads the nation in new coronavirus cases as hospitalizations surge. (Photo by Paul Hennessy/SOPA Images/LightRocket via Getty Images)

The research funding also comes months after people began to share on social media their experiences of short-term period side effects after being vaccinated.

Tens of thousands of people documented their side effects in an online database created by researchers Katharine Lee, of Washington University in St. Louis, and Kathryn Clancy, of the University of Illinois Urbana-Champaign, who each said they experienced unexpected menstrual cycles after receiving the COVID-19 vaccine, and began to collect data.

A colleague told me she has heard from others that their periods were heavy post-vax. I'm curious whether other menstruators have noticed changes too? I'm a week and a half out from dose 1 of Moderna, got my period maybe a day or so early, and am gushing like I'm in my 20s again.

The newly announced NIH funding, for which Lee and Clancy applied but were not selected, will go to researchers at five institutions: Boston University, Harvard Medical School, Johns Hopkins University, Michigan State University and Oregon Health and Science University.

The researchers will study everything from menstrual cycle changes reported on period tracking apps like Clue to menstrual changes in people with endometriosis and people trying to get pregnant, people who have not been vaccinated and teenagers. They will be examining how the vaccines may have affected flow, cycle length and pain, as well as exploring why COVID-19 vaccines may cause changes, according to Candace Tingen, Ph.D., program director of the Gynecologic Health and Disease Branch at the National Institute of Child Health and Human Development.

"Exactly like you’d see on a medication, that it may cause drowsiness, we want to say to women, 'If you get a booster, if you get a vaccine, you might have a slightly heavier period for a cycle or two,'" Tingen said. "That's what we want when we go in to get vaccinated, so we know how to prepare."

Data on menstrual side effects was not widely collected during clinical trials for COVID-19 vaccines, which were conducted by the companies behind the vaccines, Pfizer and BioNTech, Moderna and Johnson & Johnson, according to Tingen.

She said the NIH was motivated to fund research both from reports of menstrual side effects as well as the misinformation that followed around menstrual changes and fertility.

"There was a lot of misinformation out there, and NIH sees its mandate as countering misinformation with accurate information," Tingen said. "[Research] is something that we could do to step in and provide some real information about whether or not this is this is accurate."

Experts in the medical community agree menstrual changes potentially linked to COVID-19 vaccines are likely to be temporary, and current evidence suggests that the vaccine has no impact on current or future fertility.

A possible explanation for temporary changes to period timing, flow and pain may have to do with how the body responds to physical and emotional stresses. Prior studies indicate that COVID-19 itself can be a stressor, leading to irregular menstrual cycles for some people.

Menstrual changes are also controlled by the hypothalamus and the pituitary gland in the brain, along with the ovaries, which use hormones as signals. These hormone signals can be disrupted when the body goes through changes that occur with an infection, and even a vaccine.

The research funded by NIH to help solidify these theories will include as many as 500,000 participants, some of whom are already involved in clinical studies, according to Tingen. She said because of the studies' reach, transgender and nonbinary people will be included.

Dr. Laura Payne, director of the Clinical and Translational Pain Research Lab at McLean Hospital and an assistant professor in the department of psychiatry at Harvard Medical School, is one of the five researchers receiving NIH funding.

She is studying teens ages 14 to 19 to explore why the COVID-19 vaccines may cause changes in periods. 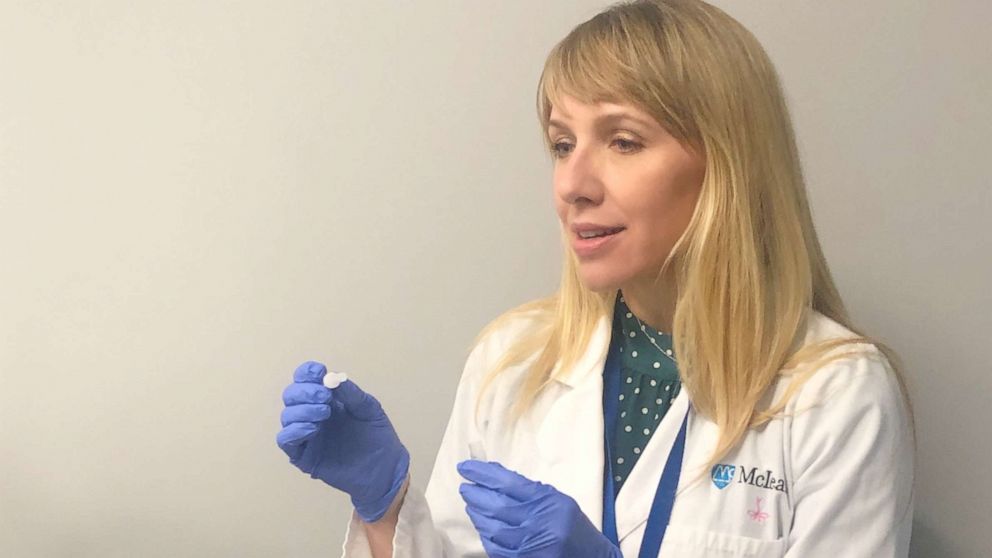 "Right now, the data on this particular mechanism is pretty limited to animal studies so we don’t really know how inflammation affects estrogen," Payne said. "I think if we can show that inflammation has an effect on the menstrual cycle, that can help us just better understand the different things that affect the menstrual cycle."

It’s an important measure of health for women.

"In the bigger scheme of things, we’re just putting the menstrual cycle and menstrual health to the forefront as an important part of medical research, and it just hasn’t been," she said. "It’s certainly an additional variable, but it’s really important and it’s important for women even if it’s not causing any kind of dangerous condition, it’s an important measure of health for women."

Payne called it a "miss" that changes to menstrual cycles were not looked at during the vaccine trials, but said she is hopeful that the work being done now will help prioritize menstrual research in the future.

"In the vaccine trials, what I'm guessing is that they were just looking for indicators of pretty severe health complications that would land somebody in the hospital and they didn’t feel like changes in the menstrual cycle were part of that," she said. "There's certainly an argument to be made for that, but I think with the anecdotal reports and with the research that myself and the other [principal investigators] will be doing, hopefully this will inform future trials to say maybe this isn't a life-or-death situation, but it’s important to women and it's important to include."

MORE: COVID-19 vaccines not believed to have impact on fertility, expert says

In addition to speaking out like so many people did when it came to menstrual changes with the vaccines, Payne said people can also volunteer for clinical research in order to move research on menstruation forward.

"Volunteering for clinical research is one of the best things that you can do to support the type of research that you want to see," she said. "One of the biggest obstacles that we face in clinical research is finding ways to access participants, particularly participants from diverse backgrounds, and that's something that we really are focusing on and NIH is really committed so we get an understanding from diverse samples of people."

Sara Yumeen, M.D., a preliminary-year internal medicine resident at Hartford Healthcare St. Vincent's Medical Center in Connecticut and a contributor to the ABC News Medical Unit, contributed to this report.