As experts continue to warn of a growing youth mental health crisis, new data is shedding light on how severely high school students have struggled during the coronavirus pandemic.

Over one-third of high school students in the United States reported experiencing poor mental health during the pandemic, while nearly half of students, 44%, reported feeling persistently sad or hopeless in the past year, according to data released Thursday by the Centers for Disease Control and Prevention (CDC).

Female high school students and those who identify as lesbian, gay and bisexual reported greater levels of poor mental health, emotional abuse by a parent or caregiver and having attempted suicide than their counterparts, according to the CDC.

The data found the pandemic's impact on parents' jobs and mental health was also felt by students, with 55% reporting experiencing emotional abuse by a parent or other adult in the home and more than a quarter of students reporting that a parent lost a job during the pandemic.

These data echo a cry for help

“These data echo a cry for help,” Dr. Debra Houry, CDC acting principal deputy director, said in a statement. “The COVID-19 pandemic has created traumatic stressors that have the potential to further erode students’ mental wellbeing."

The CDC's new data, based on a survey of high school students done over six months last year, is the first nationwide survey of its kind. It builds on previous statistics showing a growing mental health crisis among young people.

“The nation's youth we're experiencing a growing mental health crisis for COVID-19, and it's worsened during the pandemic,” Dr. Jonathan Mermin, director of CDC’s National Center for HIV, Viral Hepatitis, STD, and TB Prevention, said Thursday. “All children have been affected by the COVID 19 pandemic in some way but not all equally, and because of that, some of the youth experienced more serious effects [and] those effects can last for a long time."

In the last months of 2021, the U.S. surgeon general described the pandemic's impact on youth mental health as "devastating," and organizations representing child psychiatrists, pediatricians and children’s hospitals declared a national emergency for youth mental health.

In response to the growing crisis, U.S. Surgeon General Dr. Vivek Murthy has been on a listening tour with youth across the country this year.

"The pandemic’s been more challenging for some children,” Murthy told ABC News chief medical correspondent Dr. Jennifer Ashton in an interview for the ABC News primetime special “24 Months That Changed the World." “If we want to address this, we’ve got to listen to kids.”

3:26
"GMA" co-anchor Robin Roberts explores the state of the U.S. two years since the pandemic began and how life has changed in "24 Months That Changed the World," an ABC News primetime special.

The latest data from the CDC did have a silver lining, finding that schools can be a great mental health resource for students in providing a sense of belonging and support, called "school connectedness."

Students who felt connected to adults and peers at school were significantly less likely to report feelings of sadness or hopelessness and less likely to seriously consider or attempt suicide, according to the CDC.

The data though also found that less than half of students, 47%, reported feeling close to people at school during the pandemic. In the first weeks and months of the pandemic, many schools in the U.S. switched from in-person to remote learning, relying on tools like Zoom to stay connected with students.

Students need our support now more than ever

“School connectedness is a key to addressing youth adversities at all times – especially during times of severe disruptions,” Dr. Kathleen A. Ethier, director of CDC’s Division of Adolescent and School Health, said in a statement. “Students need our support now more than ever, whether by making sure that their schools are inclusive and safe or by providing opportunities to engage in their communities and be mentored by supportive adults.”

Earlier this month, President Joe Biden addressed the youth mental health crisis in his State of the Union address. At the same time, his administration announced a "national mental health strategy" that includes a proposal to expand early childhood and in-school mental health services.

In October, the U.S. Department of Education released resources to help schools support students' mental health, social and emotional needs through the $122 billion in pandemic relief funding made available to state and local education leaders.

In August, the Biden administration also pledged $85 million in funding at the start of the 2021-22 school year for mental health awareness, treatment and training in schools.

Dr. Gabrielle A. Carlson, a psychiatrist and president of the American Academy of Child and Adolescent Psychiatry, told ABC News in November that she sees schools as being on "the front lines" of the mental health emergency among kids.

"We need better integrated care, and by integrated we mean you put mental health where the kids are," she said. "And having access to mental health resources in schools is so important because there's fewer of the access barriers in school." 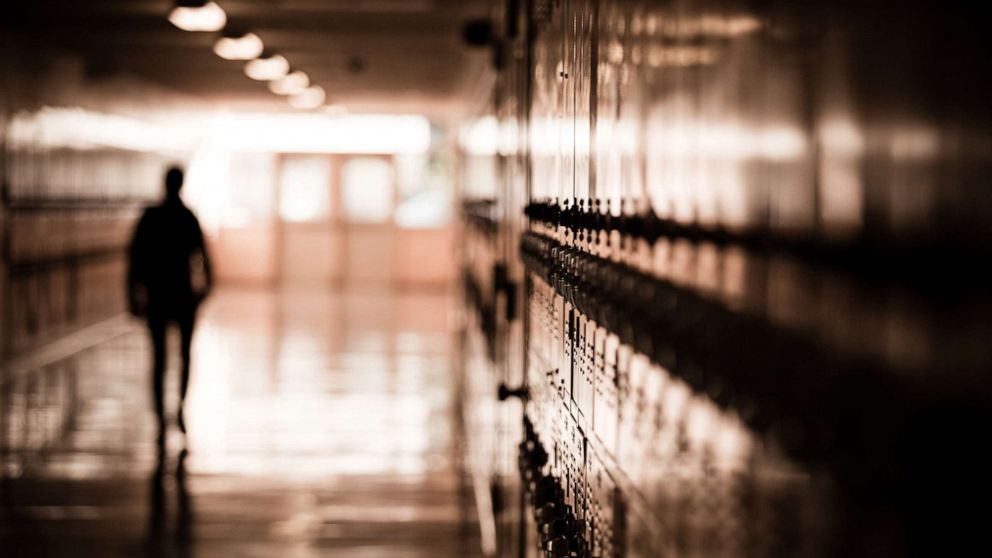 STOCK PHOTO/Getty Images
A high school student walks down a dark hallway in a public high school in this undated stock photo.

The money, the largest single donation in JED's history, will allow the foundation to scale its work to reach over 12 million students, the foundation's CEO, John MacPhee, told ABC News.

MORE: Experts warn of youth mental health crisis. Here's what one nonprofit is doing about it

The goal of the foundation's efforts, according to MacPhee, is to make mental health awareness and support part of the culture of schools.

"Everyone in the school, everyone in the community, has a role to play to support the mental health and well-being of young people," he said. "It's a culture of caring where there is really no wrong door, so it is everyone's responsibility to notice and support someone who might be struggling."