As new cases of COVID-19 decline across the country for the first time in weeks, the debate over face masks for kids is reaching a fever pitch.

New Jersey Gov. Phil Murphy, a Democrat who has imposed some of the strictest pandemic-related mandates in the United States, announced Monday that the state’s requirements for masks in schools will end the second week of March.

"Balancing public health with getting back to some semblance of normalcy is not easy," Murphy wrote on Twitter, confirming the mask requirement will end March 7. "But we can responsibly take this step due to declining COVID numbers and growth in vaccinations."

Officials in three additional states -- Connecticut, Delaware and Oregon -- also announced Monday they will pull back state mask mandates in the coming weeks, leaving it up to local school districts to decide masking rules going forward. 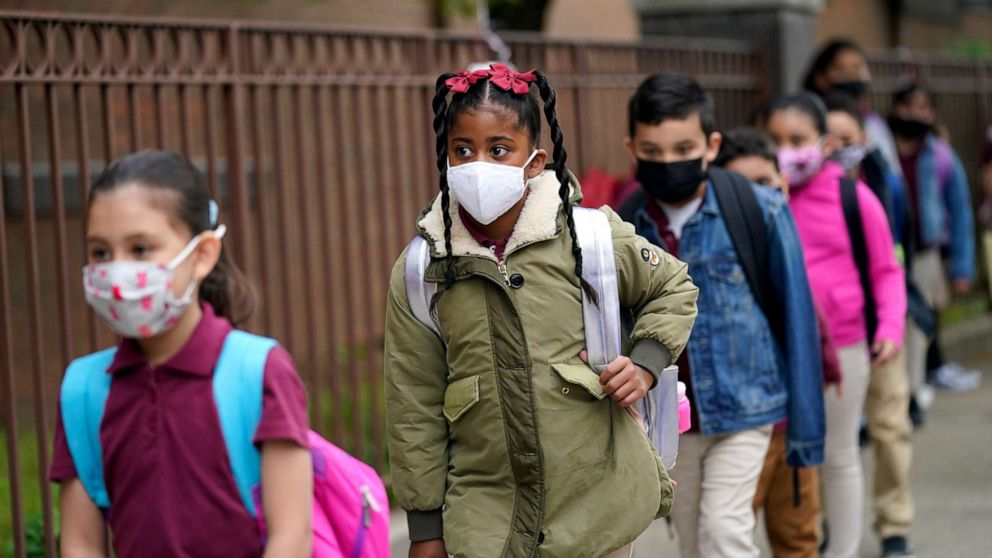 Both the American Academy of Pediatrics (AAP) and the Centers for Disease Control and Prevention (CDC) continue to recommend universal indoor masking at schools for all people ages 2 and older, regardless of vaccination status.

More than one dozen states and Washington, D.C., currently require face masks in schools, according to an ABC News analysis. Other states, like Texas and Virginia, have banned mandates.

In Virginia, where Gov. Glenn Youngkin's executive order allows families to opt their children out of mask requirements at school, at least seven school districts have filed a lawsuit against the order.

The mask debate has also moved to the courtroom in Illinois, where a judge last week ruled against Gov. JB Pritzker's school mask mandate after parents and teachers from more than 150 districts filed lawsuits, according to WLS-TV, an ABC station in Chicago. 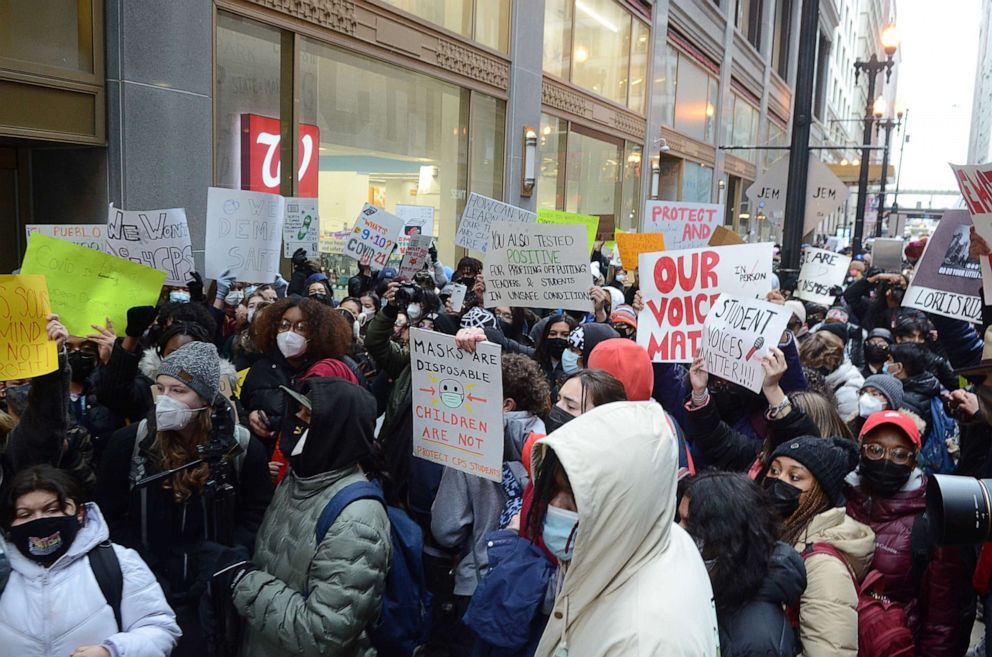 Anadolu Agency via Getty Images, FILE
Students held a walkout to demand a voice in the ongoing battle between the school district and the teacher's union over COVID-19 safety measures, Jan. 14, 2022, gathering in front of Chicago Public School headquarters in Chicago.

Studies show that masking in school dramatically reduces the risk of COVID-19 transmission. Fewer outbreaks means schools can stay open for in-person learning. But some parents wonder how masking might interfere with in-person learning.

Karla Alsop, a mom of three in Virginia, blames masks for her daughter's difficulty with reading. Alsop's daughter attends a public school in Stafford County, where schools continue to follow a mask mandate.

"She's saying that she can't read like a second grader and she's afraid to go to school. I can't, as a parent, let that go," Alsop told ABC News. "This is about parents having the rights to make the best decisions for their kids regarding their health, regarding their education." 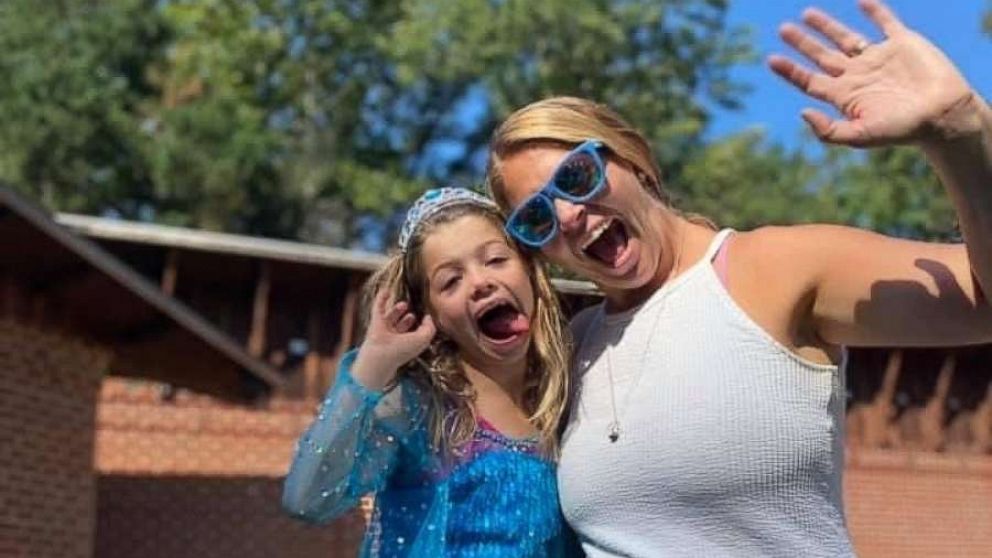 So far, studies show that for most children, masking at school has minimal effect on development and learning comprehension.

"That's something we can still see and still be very expressive with, even if you're wearing a mask," Lee said of body language cues.

In Florida, where mask mandates in schools were dropped last fall, Kimberly Lasher continues to send her three daughters, ages 11, 9 and 6, to school wearing masks.

"We just chose to wear masks, I think, to help protect those who maybe aren't taking the same precautions," said Lasher. "Perhaps if my daughter is wearing a mask, that can prevent them from spreading COVID to another student or even a teacher and, in our opinion, every little bit helps, for sure." 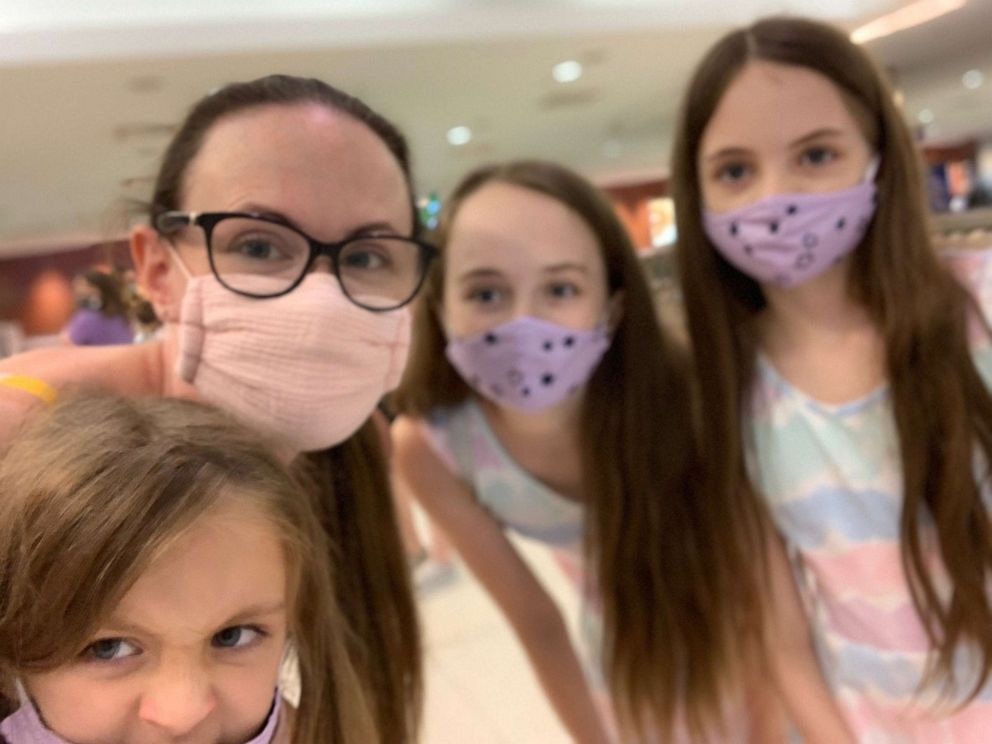 According to a poll released last August, 69% of people of supported their local school districts requiring teachers, students and administrators to wear masks in schools at the start of the school year. The same poll, released by Axios/IPSOS, found one in three Americans support state laws prohibiting local governments from requiring masks.

MORE: Pfizer requests authorization of COVID-19 vaccine for kids under 5: What to know

Pediatric cases of COVID-19 surged over the holidays amid the omicron variant but have begun to decrease, according to a report by the AAP and the Children’s Hospital Association.

The AAP and Children's Hospital Association, however, warn that pediatric cases remain “extremely high” and triple the peak level of the delta surge in the summer of 2021.

Though children ages 5 and older are now eligible to be vaccinated against COVID-19, more than 28 million eligible children remain completely unvaccinated, according to federal and census data.

Dr. Elissa Perkins, a mom and a Boston Medical Center emergency room doctor with expertise in infectious diseases, said she believes there needs to be a more nuanced approach when it comes to kids and masks.

Perkins told ABC News she was a "very early proponent" of community-wide masking, but said her philosophy began to change as vaccines became more widely available, including to kids.

Only kids ages 5 and older are currently eligible to be vaccinated against COVID-19. Most health experts counter that because even vaccinated kids can still transmit the virus, removing mask mandates could pose risks to younger siblings.

"That, for me, was the start of the inflection point when it became time to think about what are we accomplishing with mandatory masks," she said. "At the same time, masks went from being what were what were initially a short-term intervention to a long-term intervention."

Perkins continued, "Masks have become a long-term intervention, and we need to examine what the possible downsides might be if we plan to continue them."

Researchers at the National Institutes of Health (NIH) have heard parents' concerns and are now studying the potential downstream effects of prolonged masking for children, according to Dr. James A. Griffin, chief of the NIH's Eunice Kennedy Shriver National Institute of Child Health and Human Development.

"We do understand that one of the areas where masks do impair children is in their ability to understand what is being said to them," said Griffin. "The difference between being able to understand a 'bill' and a 'dill' with the mask on that 'd' and 'b' sound can be very hard to distinguish without being able to see the lips, so there are challenges ... we do recognize."

Rachel Simmons, a parenting expert and the author of of the bestselling book "Odd Girl Out," said if parents are concerned about their child's struggles due to mask-wearing, they can help their kids cope by creating a plan.

"When our kids have a plan for who they can go see, what they can do when they get stressed out, research tells us they will have the tools to deal with the situation when it comes up," said Simmons, who also recommends teaching kids mindfulness exercises, like feeling their feet on the ground, and supplying them with something calming, like a fidget toy, note or mint, to use during the day." 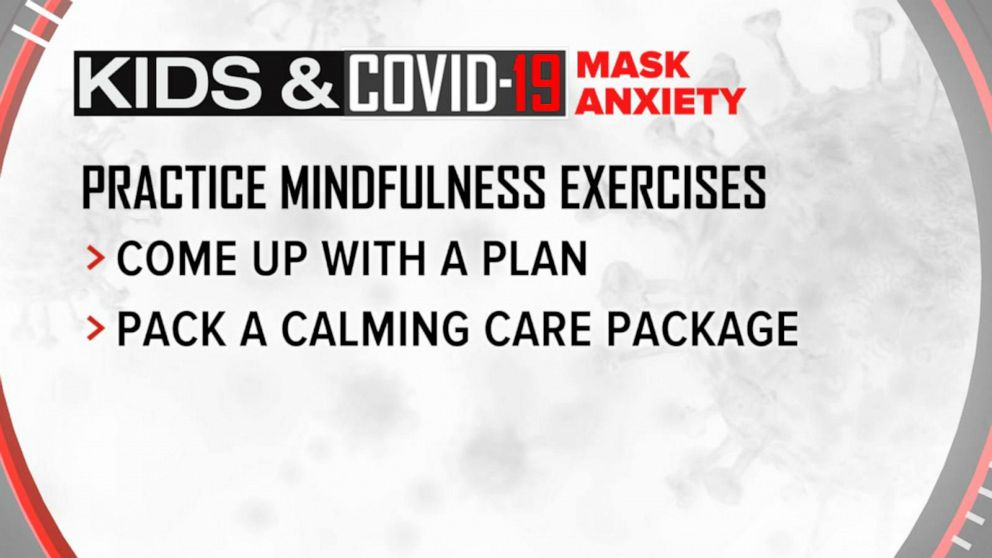 For parents who are struggling with how to respond to their child's school if they don't agree with the mask policy, Simmons said the best approach is to be a "partner" to the school.

"If you're difficult to deal with as a parent, it will be harder to get heard," she said. "So don't send emails late at night. Be a partner to the school. Show your kids that you can respect someone even when you disagree." 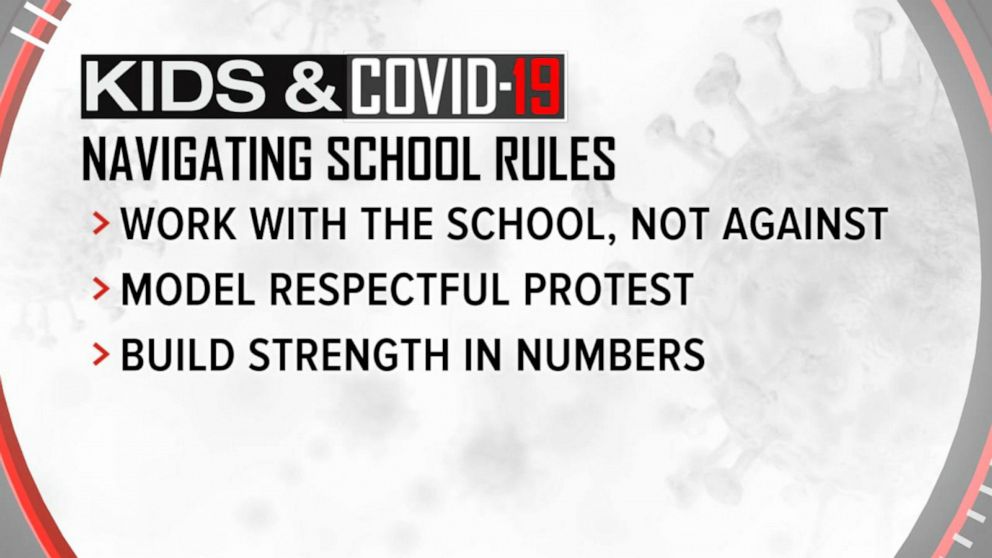 Simmons added, "And remember, your best way to be heard is if you have other parents standing with you."