Dani Donovan, a 30-year-old woman from Omaha, Nebraska, said she spent the better part of a decade going to different doctors to seek help for chronic pain.

At each visit, according to Donovan, she would be told she needed to lose weight, a discouraging cycle that she said kept her from seeking more medical care.

"I was in pain and all doctors would say to me is that I need to lose weight," Donovan told "Good Morning America," noting the experience would often lead her down a cycle of binge eating due to her frustration and pain. "I felt like doctors wouldn’t listen to me and it was making me not go to want to see the doctors."

That changed when Donovan went to see a new primary care physician, whom she said listened to her symptoms instead of focusing on her weight.

While in the waiting room at that doctor's office in December, Donovan saw what are called "Don't Weigh Me" cards, business cards that are designed for a patient to hand to a nurse or doctor.

The cards read on the front, "Please don't weigh me unless it's (really) medically necessary. If you really need my weight, please tell me why so that I can give you my informed consent."

On the back of the card is a list of reasons why a person may not want to be weighed, including the risk of weight stigma and stress and that "most health conditions can be addressed" without knowing a patient's weight, according to the card.

Saying "no" when you're asked to step on the scale at the doctor's office can feel so intimidating.

But you can get 5 of these cards for free (just $1 for postage)!https://t.co/OBZEkEsFYT

The cards were a game-changer for Donovan, who said they left her empowered to ask to not be weighed at doctors' appointments.

"I had heard online that you could ask doctors not to weigh you, but I still felt really intimidated to say that out loud," said Donovan. "You're used to going to the doctor's office and them herding you onto the scale. It's just part of the routine."

"I was able to just show the card to the woman who was bringing me back and it was like OK and we continued on," she said. 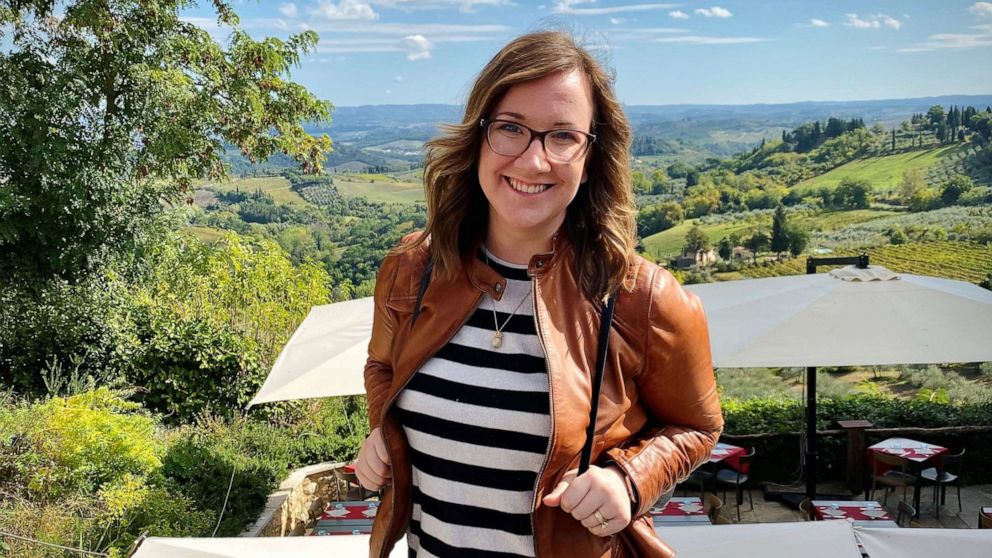 Dani Donovan
Dani Donovan, of Nebraska, shared a photo of "Don't Weigh Me" cards in a tweet that went viral.

Donovan said she was ultimately diagnosed with Ehlers Danlos syndromes, a group of inherited connective tissue disorders, according to the National Institutes of Health.

"It just made a huge difference to have been heard," said Donovan, adding that she now feels comfortable going to see her doctors.

It was a similar experience with weight stigma at doctors' offices that led Ginny Jones to create the "Don't Weigh Me" cards nearly four years ago.

MORE: How this mom changed her health by ditching the scale

Jones, the founder of More-Love.org, described by Jones as an "online resource that empowers parents to raise kids who are free from body hate and eating disorders," said she began asking to not be weighed at doctors' offices when she started her recovery from a decades-long eating disorder.

"I decided I would not be weighed unless it was necessary," said Jones, explaining that she asked her doctors verbally at each appointment. "Very interestingly, in many, many years of asking not to be weighed, it's never been required for my care." 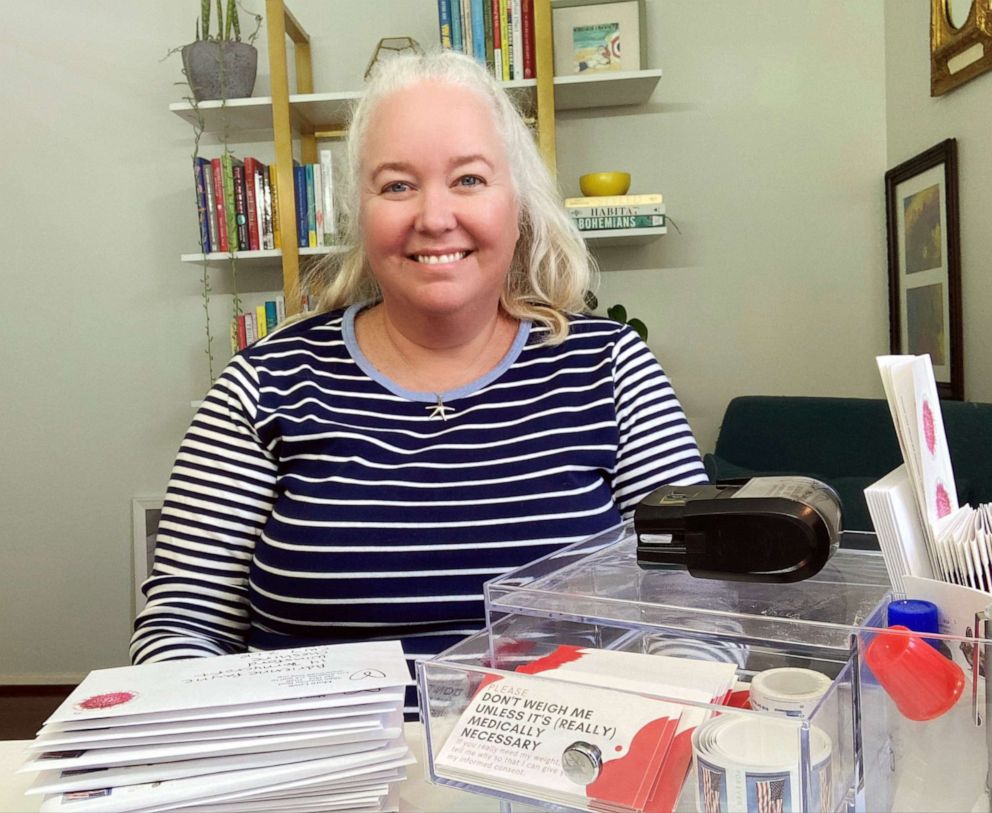 Ginny Jones
Ginny Jones, of California, is the founder of More-Love.org and the creator of "Don't Weigh Me" cards.

Jones said that as she began working with parents and people in recovery from eating disorders, she saw she was not alone in not wanting weight to be the focus of doctors' appointments. She launched the cards as a way for people to have something in their pocket they could just easily hand to a doctor or nurse.

"I posted them on my website kind of thinking maybe a couple people would be interested," said Jones. "And they have had a huge demand."

The cards, which are available for sale on Jones's website, have been purchased by not just individuals but also therapists, dietitians and doctors, according to Jones. 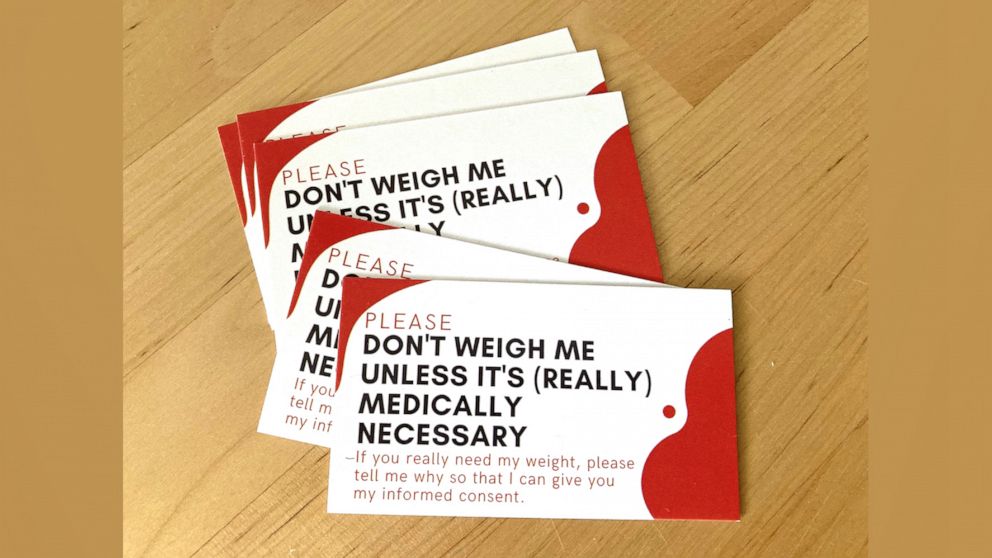 Dr. Lesley Williams-Blackwell, an Arizona-based family medicine physician and eating disorder specialist, carries the cards in her office so that patients can take them and use them with other doctors.

Williams-Blackwell said she started doing automatic blind weights -- meaning the patient is weighed but the number on the scale is not shown to them -- in her practice after an incident in which a patient fled the office after being weighed.

"She was so upset that she fled the office," said Williams-Blackwell. "That just illustrated for me that you don't know, especially if it's your first time meeting someone, how [weight] being the first piece of data that they're presented with, even before you have an opportunity to meet them, could be very triggering or upsetting."

Williams-Blackwell said when she takes her three children, ages 9 to 12, to doctors' appointments, she asks that their weights not be shown or discussed.

She said, in her experience, it is important for doctors and patients to look beyond a single number when it comes to someone's health.

"I really would challenge people to look at health in a more holistic way and to not feel that they have to get so pigeonholed into weight as the sole marker of how healthy someone is," said Williams-Blackwell. "Because the reality is that there's there's so much more to health."

Chelsea Kronengold, a spokeswoman for the National Eating Disorders Association, said doctors' focus on weight can often not only miss other conditions that may be present, but can also lead to weight stigma and eating disorder behaviors. 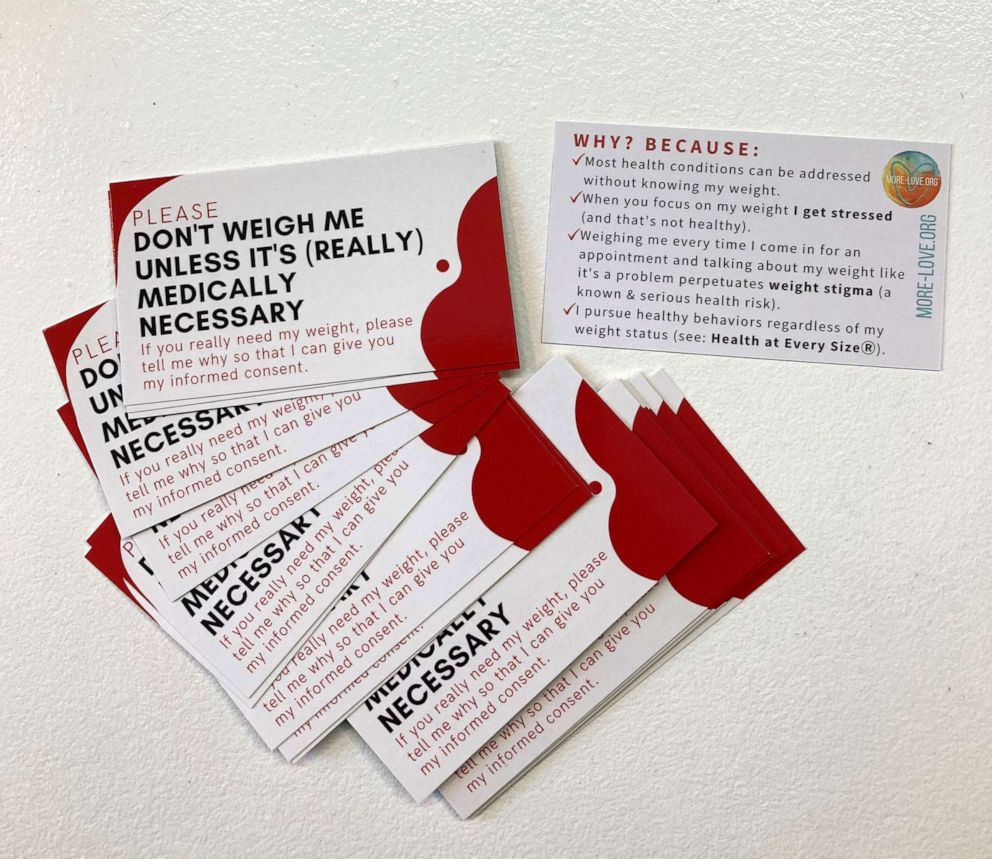 "Weight stigma is discriminating or stereotyping someone based on their weight, which we know that medical providers frequently do, as well as the general public," said Kronengold. "And weight stigma can increase body dissatisfaction, which is a leading risk factor in the development of eating disorders."

Nearly 30 million Americans will have an eating disorder in their lifetime, and over the past two years of the coronavirus pandemic, eating disorders have been on the rise in the U.S., according to NEDA.

Jones said she hopes the conversation around weight changes in society to the point that it puts her "Don't Weigh Me" cards venture out of business.

"My dream and my vision is that we actually live in a society that respects bodies regardless of weight, and that being weighed at the doctor's office is not an assumed first step," she said. "I don't want to be in business in 10 years selling cards. My vision is actually that we change the conversations at a much deeper level, and that doctors start to recognize the harm that being weighed [in their offices] can cause."