By day, Alease Daniel works with embryos, eggs and sperm in a laboratory as an embryologist at a North Carolina fertility clinic.

Outside of the lab, Daniel, 26, breaks down myths and misconceptions about infertility on TikTok, where she has gone viral with videos she says she hopes make a confusing and stressful topic more easy to understand.

"I saw that our patients had a lot of questions for us about the process, what was happening in the lab, and I really wanted a way to give them that information," Daniel told "Good Morning America." "And I figured if our patients don't know it, there are patients all over the place who don't know."

As an embryologist, Daniel plays an often unseen but critical role in the in-vitro fertilization process as the person responsible for embryos from the time of egg retrieval to when an embryo is implanted into the uterus.

"You're the one responsible for growing embryos, freezing embryos, thawing embryos, all the stuff that happens in the IVF lab," Daniel said of an embryologist's role, which also includes grading embryos to decide which are usable and testing embryos to screen for genetic diseases.

MORE: Why is infertility so painful?: Doctor and patient break down taboo women's health topic

Daniel said she hopes to reach a large audience on TikTok, as fertility problems affect about 9% of men and about 11% of women of reproductive age in the United States, according to the National Institutes of Health.

Here she breaks down four myths about the process of trying to get pregnant.

Myth No. 1: Infertility is a women's issue.

Daniel said some of the most common misconceptions she sees in questions she gets on TikTok center around sperm, the male reproductive cell.

"I don't think it's a topic that a lot of people are thinking about," she said. "A lot of people going into fertility are thinking that it's the egg source, not necessarily the sperm source, which is not the case. There are a lot of reasons for infertility." 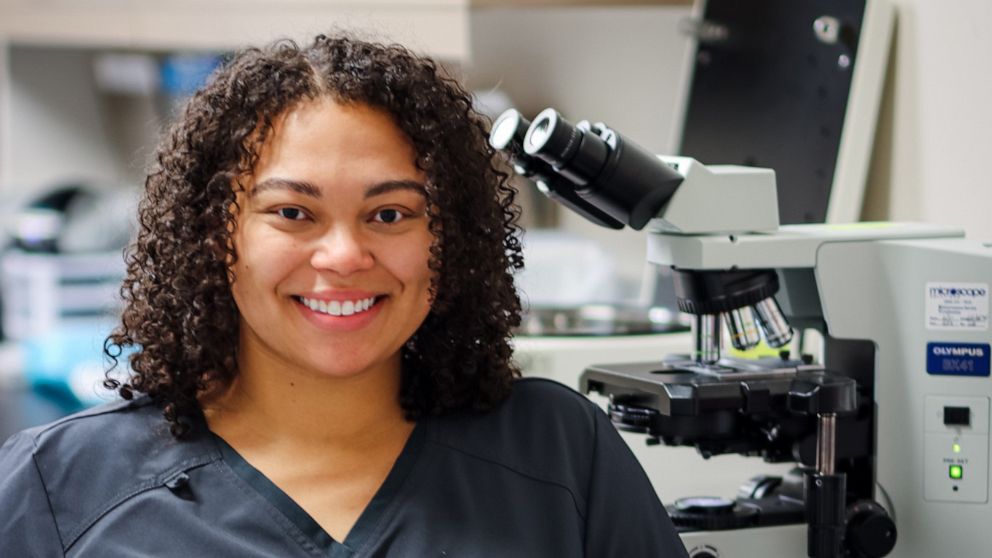 Amaris Daniel-DASHphotography
Alease Daniel is an embryologist who shares information about infertility on TikTok.

In her clinic work, Daniel said most of the patients she sees come in assuming the woman is experiencing infertility issues, when, in fact, it can be a male issue too.

"I think a lot of people who are producing sperm think that if they're ejaculating, then there's no issue, and that is just not the case," said Daniel. "Just because someone is ejaculating doesn't mean that there is sperm in the ejaculate."

Couples who go in for an initial visit with an infertility specialist should expect to have the male partner examined just as thoroughly as the female, according to Daniel.

"If you go to a specialist, they're going to have you get a semen analysis," she said. "A semen analysis is probably one of the top tests that I would recommend for a couple to get because it's very cheap, it's efficient and you get a lot of information from it."

Myth No. 2: IVF will guarantee a successful pregnancy.

While the process of IVF is increasingly common in the U.S., it is not a guaranteed way of having a baby, according to Daniel.

"I would say the biggest misconception about IVF, in general, is that IVF guarantees a baby," said Daniel. "And that is just not true."

IVF involves removing a woman's eggs, fertilizing the eggs in the laboratory and then transferring the resulting embryos into the woman's uterus, according to the Centers for Disease Control and Prevention. Around 2% of all infants born in the U.S. every year are conceived using assisted reproductive technology, the most common of which is IVF, according to the CDC.

"We have lots of patients who have done multiple cycles, multiple back-to-back with their eggs, with donor gametes, and they still don't have the little one they've been working towards," she said. "I think a lot of people don't realize the pregnancy rates with IVF are not 100%, or even 90%. They are much lower than that."

Myth No. 3: Embryo grading is the same at every fertility clinic.

The most common question Daniel said she gets on TikTok is about understanding embryo grading, the tool that embryologists and physicians use to determine which embryos to freeze and transfer.

"We want to make sure an embryo can survive everything we're putting it under," Daniel said on why grading is necessary. "When you're seeing your embryo grades, it's a really a great way for an embryologist to know that this embryo has a better chance of surviving."

Grading is a judgment made on the appearance of the embryo and is a subjective assessment, according to Daniel.

"Every clinic has different degrees of strictness when they're grading an embryo," she said. "Some clinics may be more strict, some may be a little more lenient, but the biggest goal is to have everyone in the clinic to be on the same strictness level."

Daniel said patients should ask their physician if they grade embryos, and how.

"Some clinics put more weight on it than others," she said. "So it's a good idea to ask your clinic, how much weight do they put into the grade of an embryo?"

While stories of embryo mix-ups at fertility clinics make headlines, those incidences are not as common as people may think, according to Daniel.

"That is a big fear of patients," said Daniel. "Because [fertility] is such a big field and such an important field with a lot of emotions involved, when there is a mistake, it's everywhere ... but it is very unlikely for things like that to happen."

Daniel said she gets questions often about how to protect embryos when going through IVF. She said the first question to ask the clinic and doctor is, "What is your protocol for chain of custody?"

Chain of custody refers to the identification of each person who handles sperm, oocytes and embryos through every step of the IVF process, beginning at egg retrieval, according to the American Society for Reproductive Medicine, which offers guidelines on chain of custody protocol.

Daniel also recommends that patients make sure the fertility clinic frequently asks for identification and details.

"I always like to instill in patients to make sure, especially with partners, they're labeling their stuff, like collection kits," she said. "And any time you go to a appointment, make sure you have your ID with you."

Daniel said of the protocols she follows at her clinic, "When I check ID, I'm asking your name, your date of birth, why you're here, what you're doing, what you're expecting in terms of gender or sex selection, all of those things get asked."