A record number of women were elected to Congress last year, and two congresswomen are showing their power by shining a spotlight on critical women’s issues.

“As a Black mother and grandmother, Black maternal health is deeply personal," Adams told "Good Morning America" in a statement. "My daughter had serious complications with her pregnancies, and if not for the quality prenatal care she received, the outcome could have been different. Unfortunately, countless Black women do not have access to quality pre- and post-natal care or culturally-competent services."

Disparities in healthcare can no longer be tolerated. We are losing too many Black mothers and Black babies to preventable childbirth complications. We can and we will do better. #ForThePeople pic.twitter.com/GM7pw7ws7t

The Caucus was launched with more than 50 founding members, including a number of Underwood's freshman female colleagues, including Rep. Ayanna Pressley, D-Mass., and Rep. Lucy McBath, D-Ga.

About 700 women die each year in the U.S. due to complications from pregnancy or giving birth, according to the Centers for Disease Control and Prevention, and some 65,000 women nearly die of pregnancy-related complications. While every other developed country has seen a decrease in maternal deaths in recent years, the U.S. has seen an increase, data shows.

The numbers are even more staggering for African-American women.

Though it spends the most $, the US has the worst maternal death rate in the developed world. Rate is nearly 4x worse for black women than white women, even adjusted for education & income. I’m lauching the Black Maternal Health Caucus w/@RepAdams to elevate this important issue. pic.twitter.com/iWUHxx8viV

“If you're an African-American… your risks of dying in childbirth are three to four times higher than if you're white,” Dr. Neel Shah, assistant professor at Harvard Medical School and an OB-GYN at Beth Israel Deaconess Medical Center in Boston, told ABC News last year. “It's not tied to income. It's not tied to education… It's something about the lived experience of being African-American.”

Underwood told a story Tuesday at the launch of the caucus about a friend who was her classmate at Johns Hopkins University and later became a CDC epidemiologist. The woman, identified by Underwood as Dr. Shalon Irving, died in 2017 at age 36, three weeks after giving birth to her daughter.

"Shalon’s story is heartbreaking. And it’s unacceptable how common it is in this country," Underwood said. 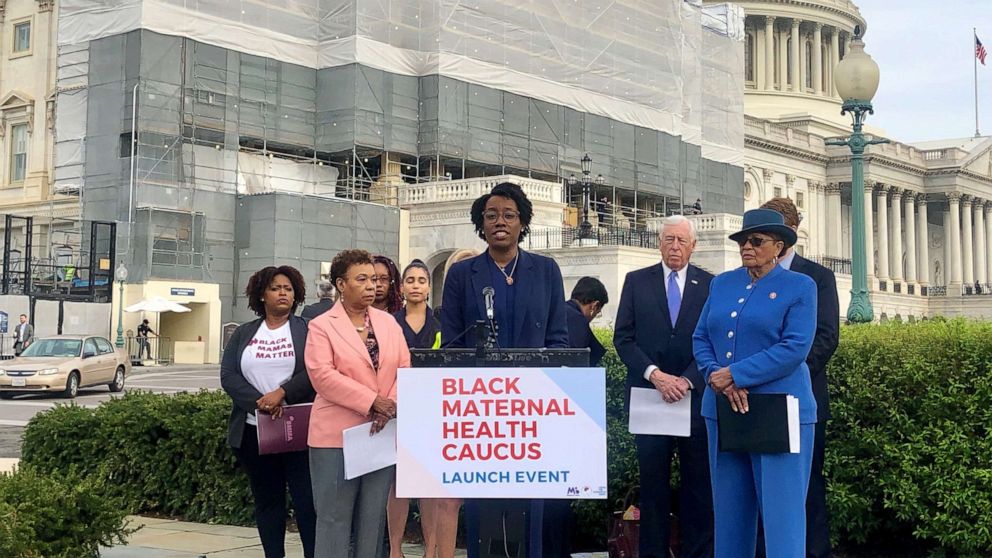 A Brookings Institution study found that black mothers with advanced professional degrees, such as a master's degree or higher, have a higher chance of infant mortality compared to white women whose highest education level is the eighth grade.

The most common complications that women die of during and after childbirth around the world include severe bleeding, infections, high blood pressure during pregnancy, complications from delivery and an unsafe abortion, according to WHO.

The goal of the Black Maternal health Caucus is to "raise awareness within Congress to establish Black maternal health as a national priority, and explore and advocate for effective, evidence-based, culturally-competent policies and best practices for health outcomes for Black mothers," according to a statement released by the offices of Rep. Underwood and Rep. Adams.

"The status quo is intolerable, we must come together to reverse current trends and achieve optimal birth outcomes for all families," Underwood said in a statement.