“We tried to see how different ways of wearing the mask would affect the amount of droplets that escape,” said Dr. Sid Verma, an assistant professor of ocean and mechanical engineering.

To conduct the demonstrations, researchers retrofitted a mannequin to release droplets through the nose and mouth, simulating a cough, sneeze or speaking. The droplets, made from a water and glycerin mixture, were then highlighted by a green laser beam.

The popular blue surgical, non-medical mask was placed loosely on the mannequin’s face. The researchers purposely did not press down on the internal nose clip.

“There were no droplets that were able to pass through the material,” said Verma. ”But we noticed that there were droplets escaping, primarily from the gap along the top edge of the mask.” 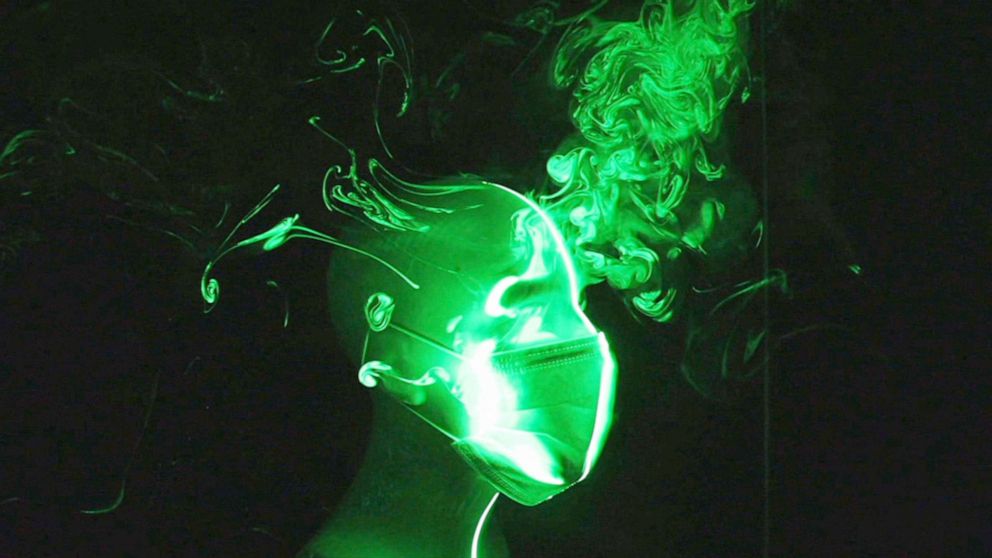 ABC News
A mannequin head is seen in a demonstration showing particles escaping from the gaps found between the blue non-medical surgical mask and the mannequin's face.

When researchers pressed down on the internal clip, contouring the mask to the curves of the mannequin’s face, they reported fewer particles escaping, although they saw an increase in particles that leaked from the sides of the mask, by the cheeks.

“The main thing to keep in mind is make sure it fits snugly on the face and any metallic wires or strips that are present, you should always try to press it down so it contours well to your face,” according to Verma. 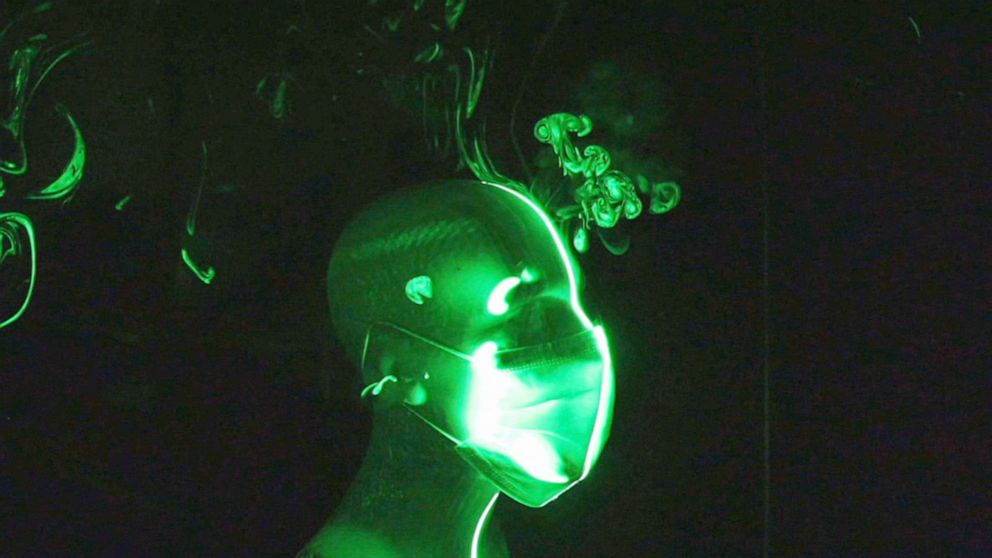 ABC News
A masked mannequin head is seen in a screen grab, of a demonstration showing that there are significantly fewer particles escaping after researchers pushed down on the internal nose clip in the mask.

Researchers also demonstrated the “half-mask” trend, when the mask is worn below the nose, only covering the mouth. “We see droplets escaping, everywhere,” said Verma during the demonstration.

“When you’re half-masking, you’re keeping your nose exposed, which makes it easier for the virus particles to enter and begin its infection,” according to Dr. Jay Bhatt, an ABC News medical contributor. Bhatt explained that half masking is a risk to both the person doing it and those around them, because virus particles can be released through the nose as well, and if a mask is not worn over the nose to block them, the particles can be released freely into the air. 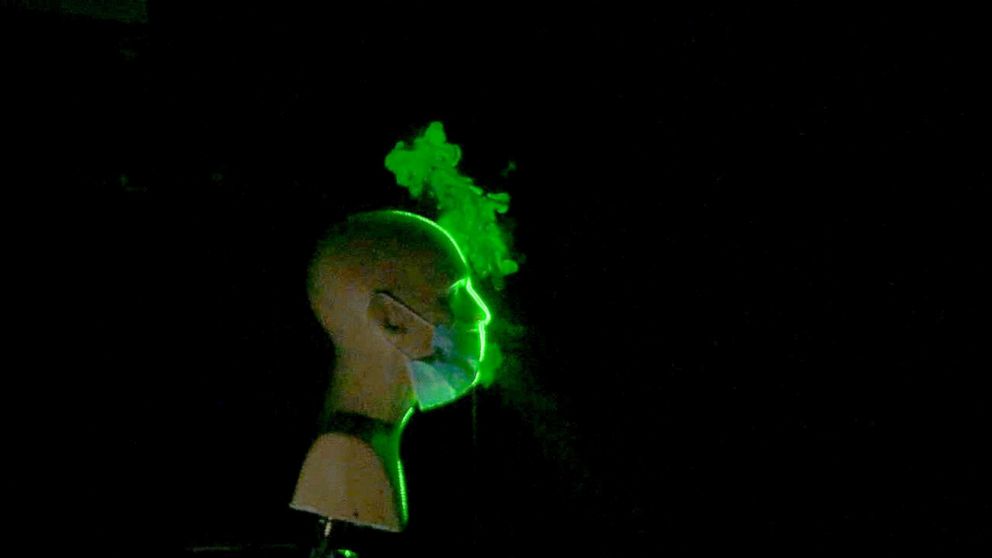 ABC News
A masked mannequin is seen in this screengrab visualizing what could happen when a person wears a mask below their nose, but covering their mouth, sometimes referred to as "half-masking."

From their observations of the demonstrations, researchers reported that particles escaping from the top of the mask usually start moving backwards, behind the mannequin. The particles can easily be carried to the right, left or behind a person, said Verma, depending on the ambient air flow conditions in the room. “That’s why it’s so important to keep practicing social distancing even when everybody’s using a mask,” he said.

The homemade mask, made with multiple layers of cotton quilting, was also included in the series of demonstrations.

Researchers had previously tested this type of homemade mask in an earlier study, published in the journal Physics of Fluids. In that study, which compared different styles of face coverings, the homemade mask with two-layers of cotton quilting blocked the most droplets in comparison to the bandanna, a loosely folded handkerchief, and a cone style mask.

In this demonstration, particles were visibly streaming from the top of the homemade mask, which did not have an internal nose clip.

MORE: Protect your face during coronavirus with these easy DIY face covers

“When quality masks restrict the flow of droplets through the material, these droplets tend to get redirected to wherever there’s small gaps or openings in the mask,” said Verma. 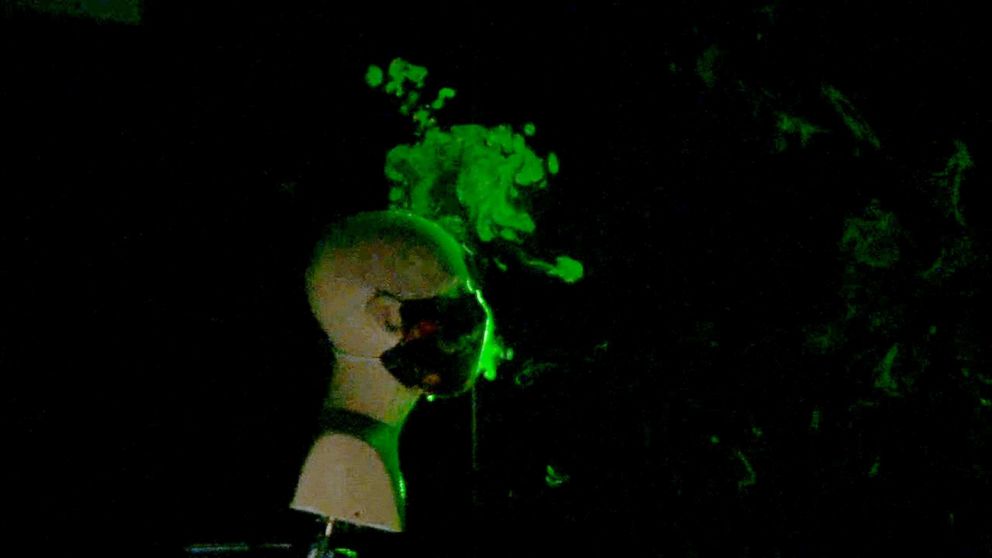 ABC News
A masked mannequin head is seeing in an exclusive demonstrations by engineering professors at Florida Atlantic University show the possible trajectory of particles that escape from the top of the mask.

The mask that showed the least amount of escaping particles and droplets was the N95 mask. Researchers attributed a multitude of reasons for this, including a heavy metal clip that closes the gap very effectively, two straps over the head to secure the mask as opposed to ear loops and a rigorous custom-fitting process. But they also cautioned that this type of mask is not for general public consumption because it should be reserved for health care workers and that the mask itself is very uncomfortable to wear for long periods of time.

“We've come to regard masks as part of our daily life. And so it's ultimately really important to balance the issue of effectiveness versus comfort when we're wearing masks,” said Bhatt, who was the former chief medical officer of the American Hospital Association. He stressed that these types of resources, such a N95 masks, should be reserved “for colleagues of mine on the front line.”

MORE: Scientists tested 14 types of masks: Here's what worked and what didn't

According to a recent model from the University of Washington’s Institute for Health Metrics and Evaluation, the widespread use of masks could prevent 100,000 COVID-19 deaths by the end of the year.

“The most important takeaway is masks do restrict the spread of droplets, but they are not perfect. They don't reduce the risk of transmission to zero,” said Verma. “This is why it's so important to still keep practicing social distancing.”