A child under the age of 5 has died due to complications from flu and respiratory syncytial virus, or RSV, health officials in California confirmed on Monday.

The California Department of Public Health did not release additional details on the child or their illness, but noted this is the first pediatric death in the state due to RSV and flu this season.

The child's death comes as cases of RSV and flu have been appearing earlier this year than usual and are on the rise across the United States.

Earlier this month, health officials in Michigan confirmed a 6-year-old died after developing complications from RSV, a contagious virus that can spread from viral respiratory droplets.

According to data from the Centers for Disease Control and Prevention, over 11,000 RSV infections were diagnosed in September 2022 – which rose to over 44,000 for the month of October.

At the same time, positive tests for influenza reported to the CDC by clinical laboratories jumped from 2,083 to 7,504 in October, according to CDC data.

Though cases of RSV are on the rise, death from the virus remains rare, according to the CDC.

There are between 100 to 500 pediatric deaths and 14,000 adult deaths each year related to RSV, with the actual figure likely higher due to undercounting.

Experts told ABC News that a combination of waning immunity to COVID and lack of exposure to other viruses, combined with close gatherings indoors, is fueling a "perfect storm."

"Mostly the issue is there's low population immunity and kids are, once again, gathered again," said Dr. John Brownstein, an epidemiologist and chief innovation officer at Boston Children's Hospital, and an ABC News contributor. "And this is facilitating rapid spread of viruses like RSV."

On Nov. 4, the CDC issued an official health advisory in response to the rise in respiratory infections in children.

The health advisory warned that "co-circulation of respiratory syncytial virus (RSV), influenza viruses, SARS-CoV-2, and others could place stress on healthcare systems this fall and winter."

Doctors say it's possible for people to become infected with two or more viruses at the same time. If this happens, especially in children or people with weakened immune systems, it can lead to a more severe illness.

RSV is a contagious virus that can spread from viral respiratory droplets transferred from an infected person's cough or sneeze; from direct contact with the virus, like kissing the face of a child with RSV; and from touching surfaces, like tables, doorknobs and crib rails, that have the virus on them and then touching your eyes, nose or mouth before hand-washing, according to the CDC.

"Pretty much all kids have gotten RSV at least once by the time they turn 2, but it's really younger kids, especially those under 6 months of age, who can really have trouble with RSV and sometimes end up in the hospital," Dr. William Linam, pediatric infectious disease doctor at Children's Healthcare of Atlanta, told ABC News last year. "That's where we want to get the word out, for families with young children or children with medical conditions, making sure they're aware this is going on." 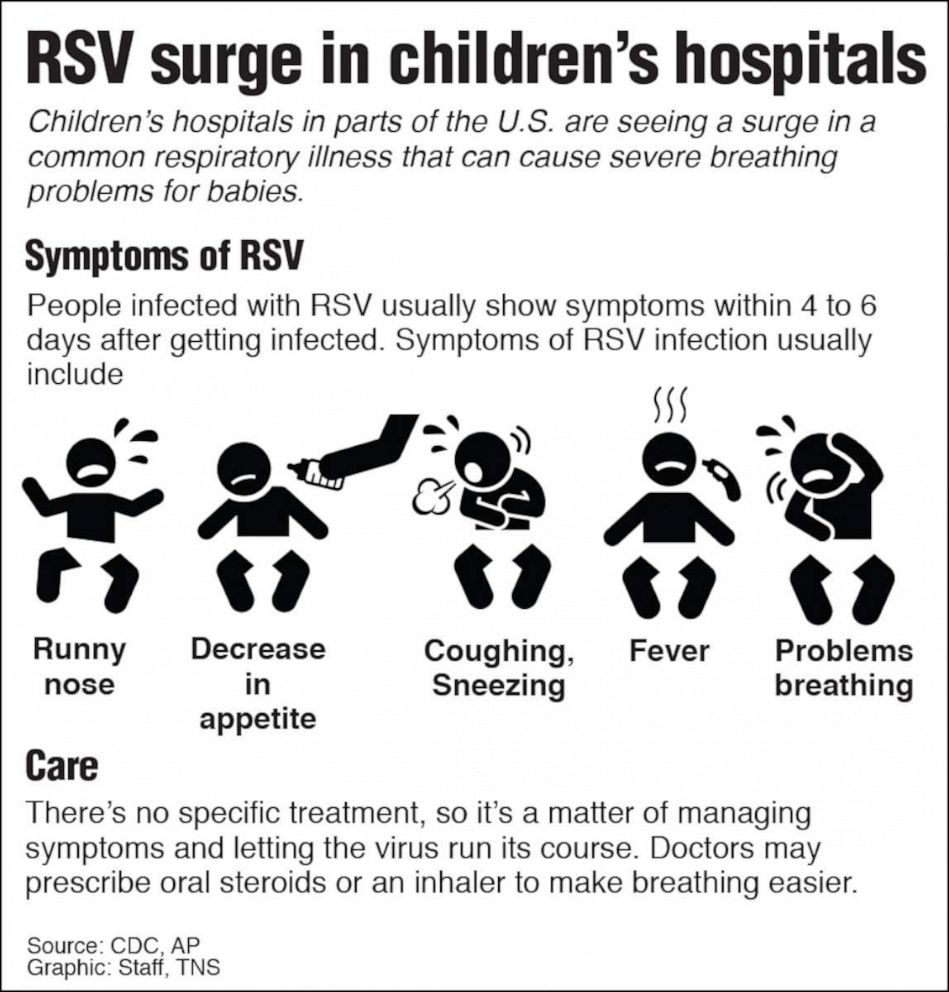 TNS via Newscom
Symptoms of RSV in babies.

"Not making a wet diaper in over eight hours is often a good marker that a child is dehydrated and a good reason to seek medical care," he said. "Sometimes kids under 6 months of age can have pauses when they're breathing and that's something to get medical attention for right away."

According to Linam, parents can help protect their kids from RSV by continuing to follow as much as possible the three Ws of the pandemic: wear a mask, wash your hands and watch your distance.

Infants who are born prematurely (less than 29 weeks) and are less than 12 months old may benefit from a medication to prevent complications of RSV since they are at increased risk of severe disease, according to the American Academy of Pediatrics.

Infants born prematurely with chronic lung disease may also qualify for medication. Parents should discuss this with their pediatrician.