By Katie Kindelan, Cathy Becker
Video by Brittany Berkowitz
Share —
Sign up for our newsletters to get GMA delivered to your inbox every morning!

Joseph DiMeo was on his way home from working the night shift at his job in Clark, New Jersey, two years ago when he fell asleep at the wheel and his car rolled over and burst into flames.

The explosion left DiMeo, now 22, with third-degree burns over 80% of his body.

DiMeo spent the next four months of his life in the burn unit of a New Jersey hospital, including over two months in a medically induced coma. His body was so badly burned that his fingertips were amputated, and he lost his lips, ears and eyelids.

"The therapist actually told me what happened to my body, and I was pretty bummed out at first," DiMeo said in an interview that aired Wednesday on "Good Morning America." "But you know, that was my life at that point, so I had to push through it."

Unable to live independently because of his injuries, DiMeo moved in with his parents, John and Rose DiMeo, who became their son's primary caregivers and marveled at his determination to move forward.

"He's been that way the whole way through, just, 'What's next? What do we do next?'" said DiMeo's father. "He just kept knocking down the goals [and is] still doing it." 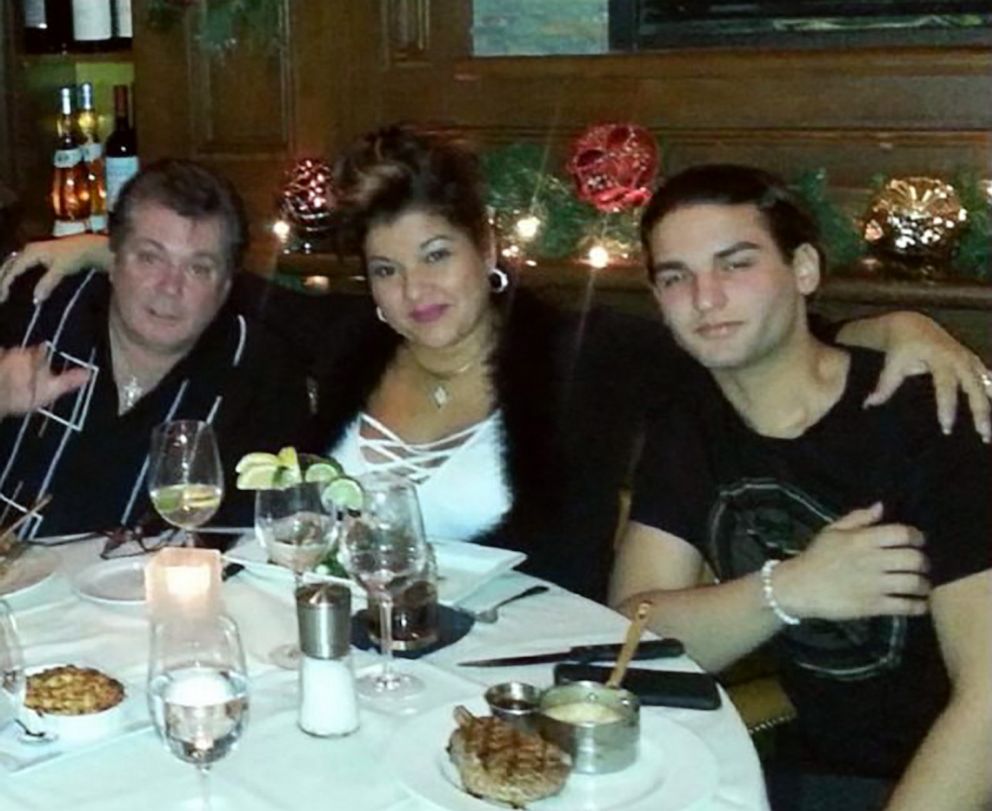 Courtesy NYU Langone Health
Rose and John DiMeo are pictured with their son Joe prior to his 2018 car accident.

Over the next year, DiMeo underwent 20 reconstructive surgeries, to the point where his plastic surgeon told him there was nothing more he could do to help DiMeo regain functionality.

DiMeo then sought a last shot at help from Dr. Eduardo D. Rodriguez, chair of the Hansjörg Wyss department of plastic surgery at NYU Langone Health.

"A lot of his body was severely burned, and if it wasn't burned, it was scarred from removing skin to cover those burns with skin grafts," Rodriguez told "GMA." "So physically, he was severely compromised, but his spirit was very strong and with great hope to not want to live this way for the rest of his life." 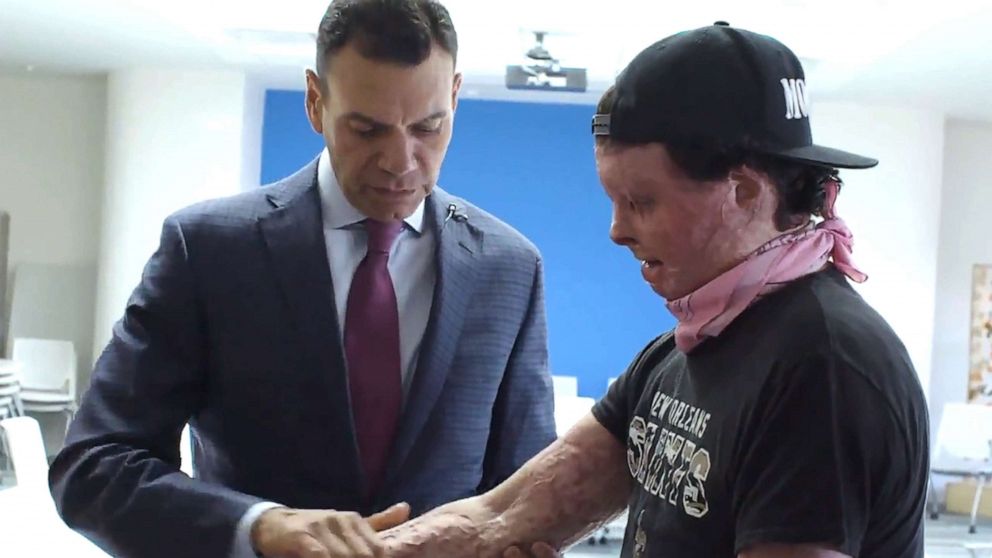 Because of his young age, good health, the severity of his burns and his motivation, DiMeo was considered a good candidate for both a face and a double hand transplant.

"I never heard of such a thing before that," DiMeo said of the transplant. "But I said, 'Let's do it then. If they're offering it, it must be working out.'"

"I was pretty excited. I wasn't really scared or nervous, I just wanted to get through it," he said.

The 'needle in a haystack' search for a donor

Before DiMeo could get through the rare procedure, the team at NYU Langone Health had to find a donor, which they estimated at a 6% chance of finding an exact match.

"We knew that it would be a needle in a haystack," Rodriguez said of the search, noting that all the surgeries DiMeo had undergone added to the complication. "We had to actually broaden our search beyond the state of New York, to the entire country, so every state in the country was actually looking for a donor for Joe."

DiMeo went onto the transplant waiting list in late 2019, just a few months before the start of the coronavirus pandemic in the United States.

The search for a donor for DiMeo continued throughout the pandemic, as did the monthly rehearsals that Rodriguez led with his medical team, even as they were called to work in different departments to respond to the surge of COVID-19 cases in the New York City area last spring.

"We had been training for Joe's operation for numerous months, and all sudden everything comes to a screeching halt," Rodriguez said. "All of us, we get taken away from our normal duties to go care for COVID patients in the main hospital, so we're now refocusing our attention on saving people's lives, but even while we're there in the ICU, and in critical care settings, we never forget about identifying Joe's donor." 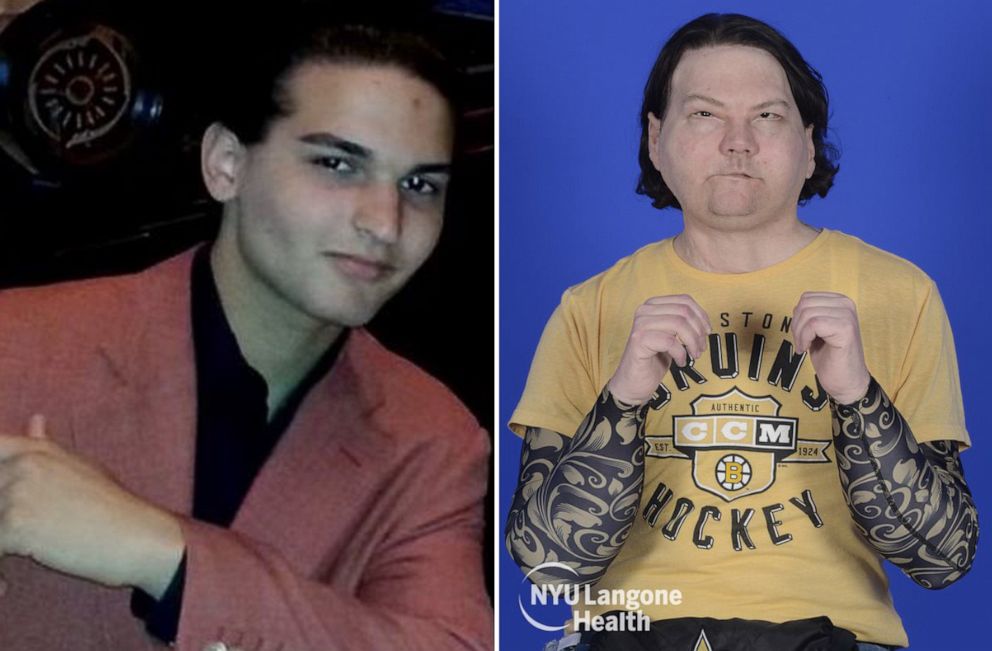 Rodriguez said his team became worried about using in-demand personal protective equipment (PPE) during their rehearsal surgeries, so they began to recycle their own PPE in the simulation lab. They also had to consider factors that did not exist in previous transplants, like making sure everyone, including DiMeo, remained negative for COVID-19.

"We were not going to leave Joe out there without his operation happening," Rodriguez said. "So every element of safety was put into play to ensure that we can perform this surgical procedure with the amount of people that were required in an institution that would support this."

During the search for a donor, DiMeo was able to connect with Cameron Underwood, a California man who underwent a face transplant at NYU Langone after sustaining a self-inflicted gunshot to the face in June 2016.

"I always thought there was new hope when I met Dr. Rodriguez, but when I saw Cameron the first time, I knew it was, like, a for sure thing now," DiMeo said, adding that he learned from Underwood to "just keep pushing through."

And while DiMeo's parents had their own fears about what could go wrong during the transplant, they saw how much their son "wanted his life back," according to Rose DiMeo.

"I just wanted him safe, on the couch, in the room where he's safe," added John DiMeo, explaining that his son told him he wanted to go back to work and drive again. "But hearing him say it, then I've got to say, you know, 'If you want to do it, then I've got to get on board with this. It's happening.'"

In August, around 10 months after the search began, a donor in Delaware was identified as a perfect match for DiMeo.

Inside a 23-hour transplant procedure

The donor, who remains anonymous, was transferred to NYU Langone on Aug. 10.

Just two days later, on Aug. 12, DiMeo was in the operating room, undergoing what would become the first-ever successful face and double hand transplant to date. 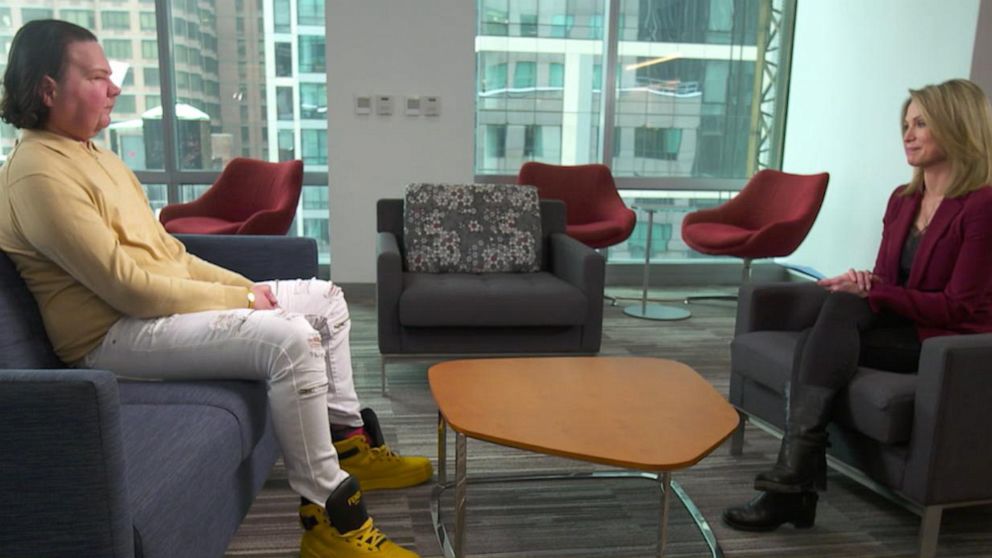 The surgical team transplanted both of DiMeo's hands to the mid-forearm and his full face, including the forehead, eyebrows, both ears, nose, eyelids, lips and underlying skull, cheek, nasal and chin bone segments.

In order to restore the likeness of the donor, the team used lifelike, three-dimensional replacements of the donor’s face and hands in the procedure, according to NYU Langone Health.

Because of advances in technology and the preparation of Rodriguez's team, DiMeo's transplant of both hands and face was several hours shorter than Underwood's face transplant in 2018, according to Rodriguez. 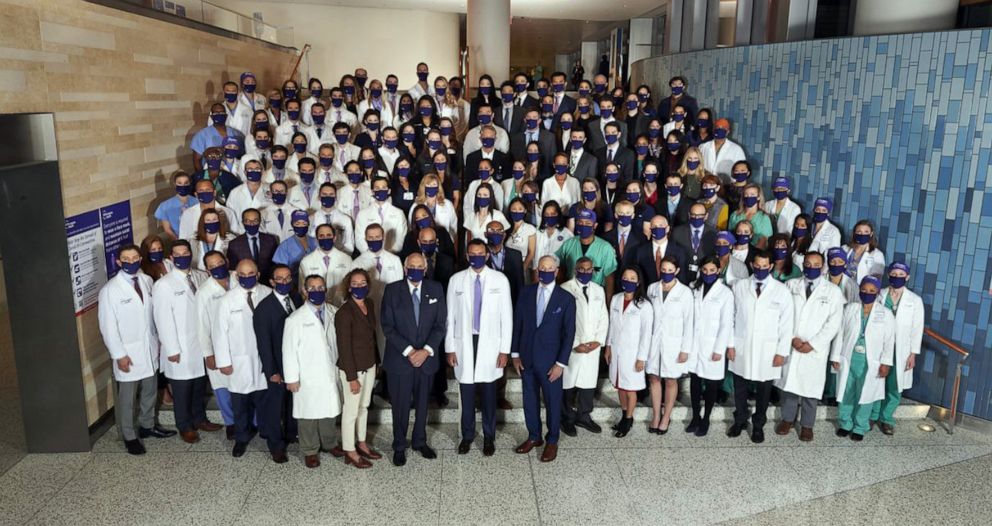 "On a personal and professional level. I'm so proud of our team, our institution to be able to provide this gift to Joe, because it just confirms how far medical science has advanced," Rodriguez said. "We continue to get better."

3:20
Dr. Eduardo Rodriguez led the 23-hour procedure on Joe DiMeo, who was severely burned in a car accident.

Waking up to a new face and new hands

When DiMeo woke up after the transplant, he said an occupational therapist opened his eyes for him, and he saw his hands first, then his face.

"It still didn't actually hit me because, I don't know, it didn't seem real at first," he said. "You know, like, how could I do this all this at once?" 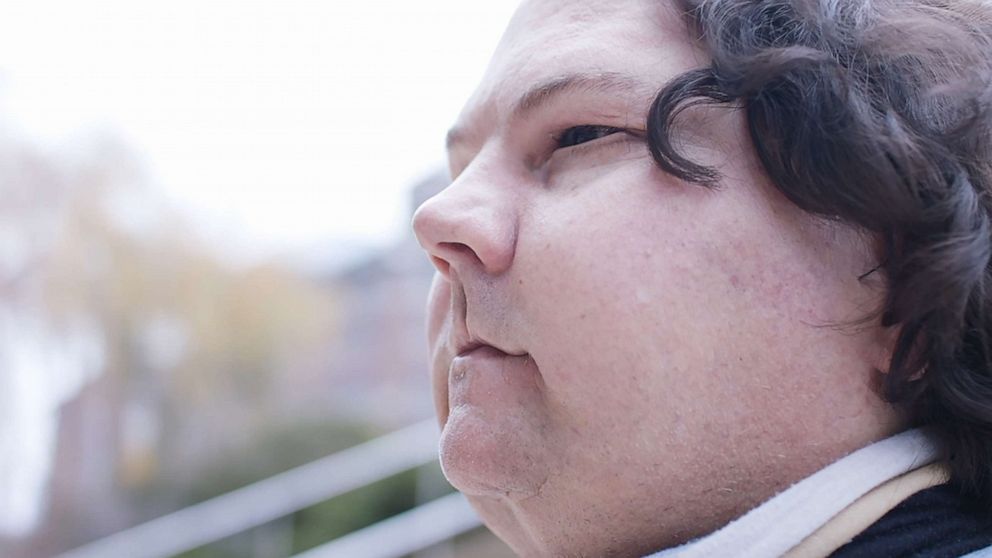 Four months after the transplant, DiMeo, who was completely dependent on his parents, is able to now dress and feed himself, throw a ball to his dog, practice his golf swing and play pool, and he has started resistance training with his new hands.

He has so far not experienced any rejection to the transplant. 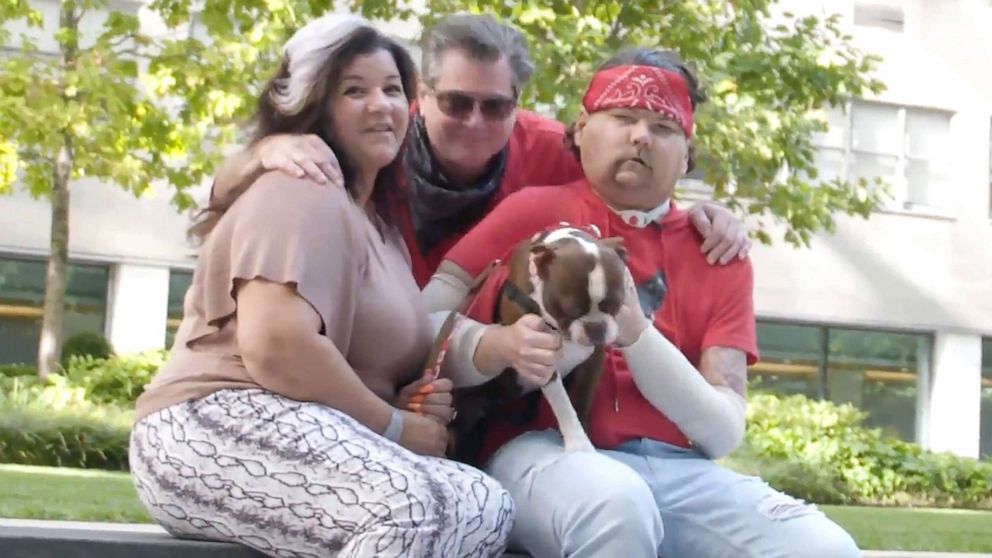 NYU Langone Health
Rose and John DiMeo are pictured with their son Joe after his face and double hand transplant.

"They said that I'm ahead of schedule because, right now, I have 20 pounds of grip strength, and usually people don't get that in five months," he said. "Even on my days off of therapy, I still go downstairs and work out."

DiMeo has also reached out to the family of his donor, whom he now has the face and hands of but does not know any details about.

"I sent them a letter, but I know they just had someone passed away, so I'm not trying to rush them or anything," he said. "I'm very grateful for them to give this gift to me, and I don't really know how to thank someone that, you know, gives you a second chance at life. I'm very thankful for it."

DiMeo said he hopes to live on his own again within the next two years, and then beyond that, have a family, a career and a "normal" and "simple" life. He said he thinks the full impact of his face transplant will hit him when he fulfills another goal, driving on his own again.

3:01
Joe DiMeo, 22, says he has been given a “second chance at life” after 16 surgeons spent 23 hours replacing his full face and hands in the groundbreaking procedure.

"It's pretty interesting to see someone's face on me, but I guess it didn't hit me yet," he said. "I think it'll really hit me when I'm driving by myself and, like, I look in the rearview mirror and see myself, by myself, you know, alone."

"I think that's when it'll hit me, because driving is my goal, long-term goal, now," DiMeo said. "It's peaceful for me."

Knowing that he has a second chance at life is also what DiMeo said keeps him motivated, along with his dog Buster, whom he credits with always cheering him up. 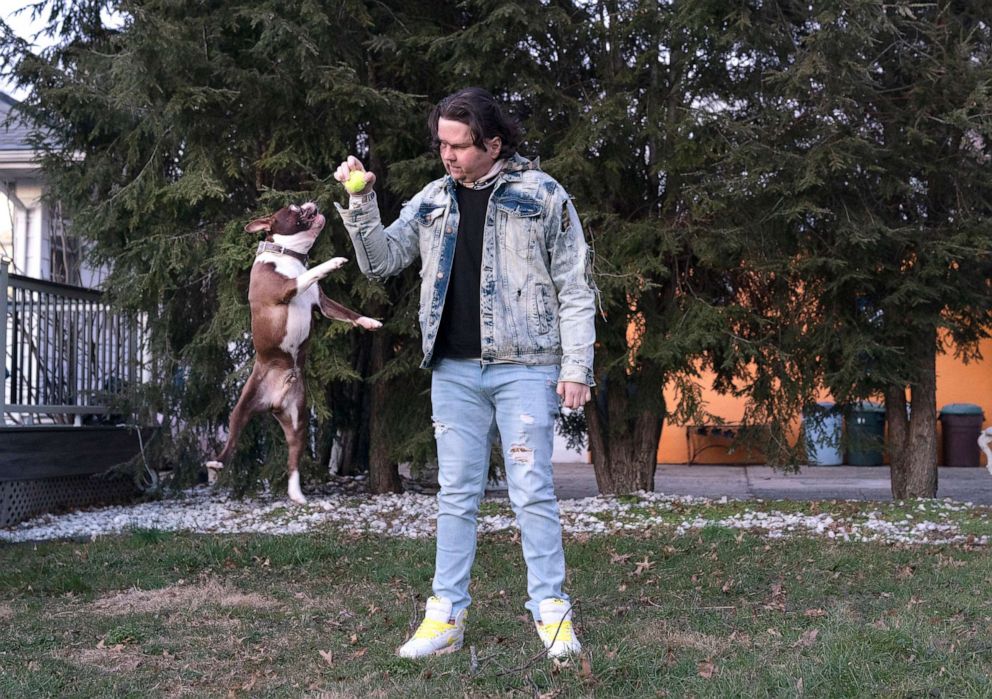 Mark Lennihan/AP
Joseph DiMeo plays ball with his dog Buster in the backyard of his house in Clark, N.J., Jan. 28, 2021, six months after an extremely rare double hand and face transplant.

"I really couldn't do anything before when I was burned, but this gives me a second chance," DiMeo said of the transplant and the donor. "I don't want to mess it up. I only got one shot now, so I just got to keep working through it."