Rebecca Roberts and her partner, Rhys Weaver, tried for several years to get pregnant with their first child together.

The couple was then thrilled last year when they learned that Roberts, after being put on fertility medication, was expecting.

When Roberts had her third ultrasound at 12 weeks pregnant, she said her thrill turned to shock when doctors discovered a second baby.

"It was really, really shocking to be told there were two babies instead of one," Roberts, 39, of Wiltshire, England, told "Good Morning America." "Then they told me there was a three-week size difference between the two babies that the doctors couldn’t understand."

The doctors had trouble understanding what was happening with Roberts' pregnancy because it is an occurrence so rare that the actual number of times it has happened is unknown, according to Roberts' doctor, David Walker, an OBGYN at Royal United Hospital in Bath. 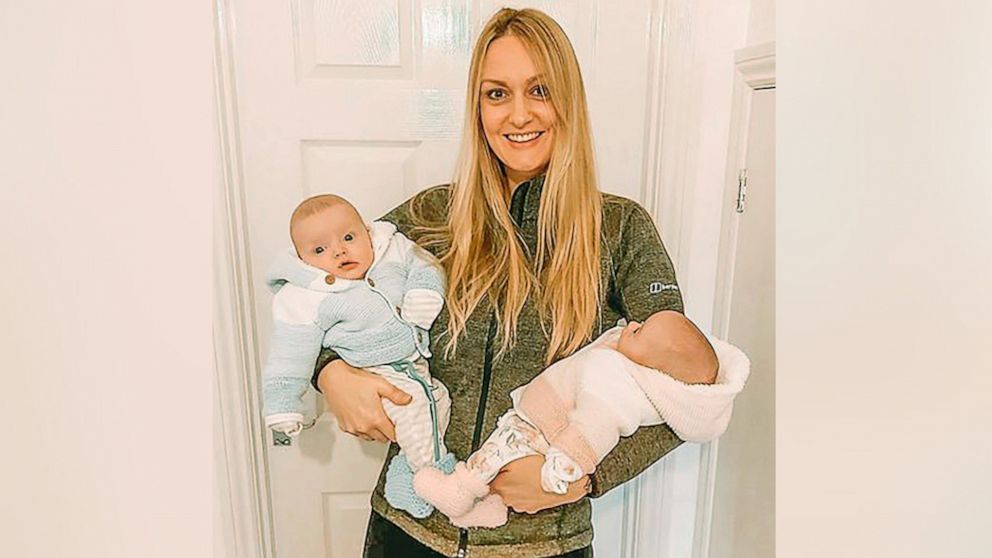 Roberts' pregnancy was diagnosed as superfetation, a phenomenon where a second, new pregnancy occurs during an initial pregnancy. In order for it to happen, eggs are released from the ovary on two separate occasions. They fertilize and then implant into the uterus, according to Walker.

"My initial reaction was how had I missed the second twin," Walker said. "And following this [I] was slightly relieved that it was not my mistake but a quite extraordinary pregnancy."

MORE: Twins who survived one of the rarest separation surgeries in the world are now thriving toddlers

In Roberts' case, her older twin measured three weeks older than the younger twin, believed to be one of the biggest age differences among known superfetation twins.

Roberts learned she was expecting a rare set of twins without Weaver by her side. He was not allowed to attend the appointment in-person because of COVID-19 restrictions in place.

"When I found out we were having twins, he was out in the parking lot," Roberts said of her partner. "There was such a mixture of emotions."

Roberts said she and Weaver struggled to find any information online about superfetation because it is so rare. 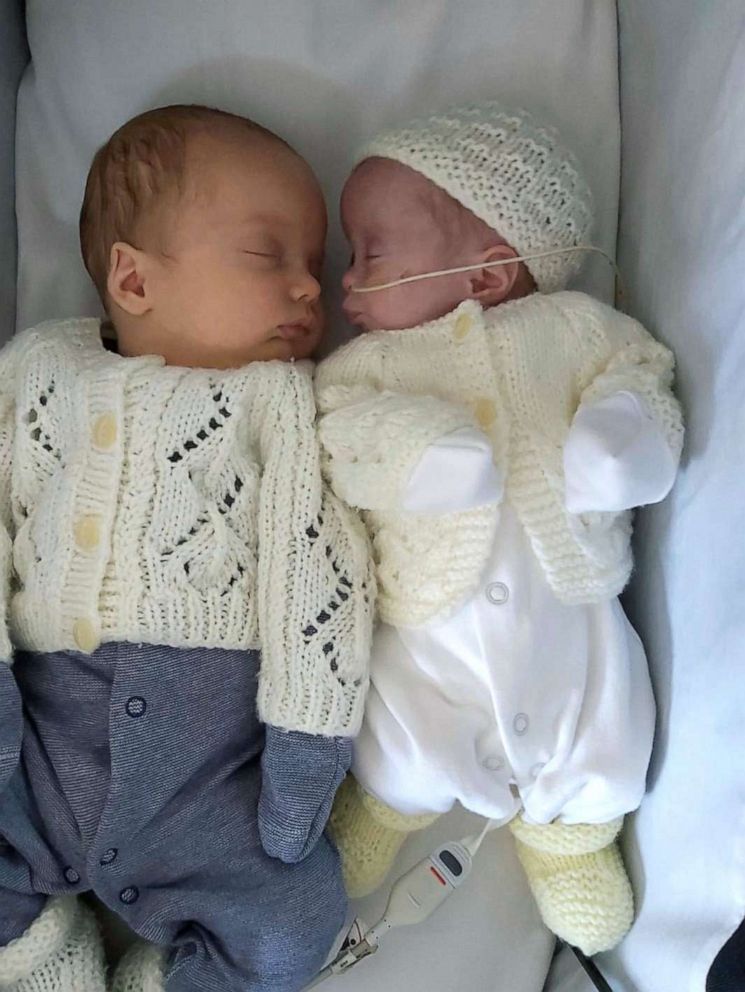 Courtesy Rebecca Roberts
Twins Noah and Rosalie were born on the same day but were conceived at different points.

They were also told by doctors that their younger twin, a daughter they named Rosalie, may not survive.

"What came after getting pregnant was just such incredible hard work," said Roberts. "It wasn’t all happy and rainbows like you expect a pregnancy to be. It was quite scary."

She went on, "With twins it’s scary already and then because of my age and the fact that they were conceived at different points, and then we were told that all the odds were against Rosalie." 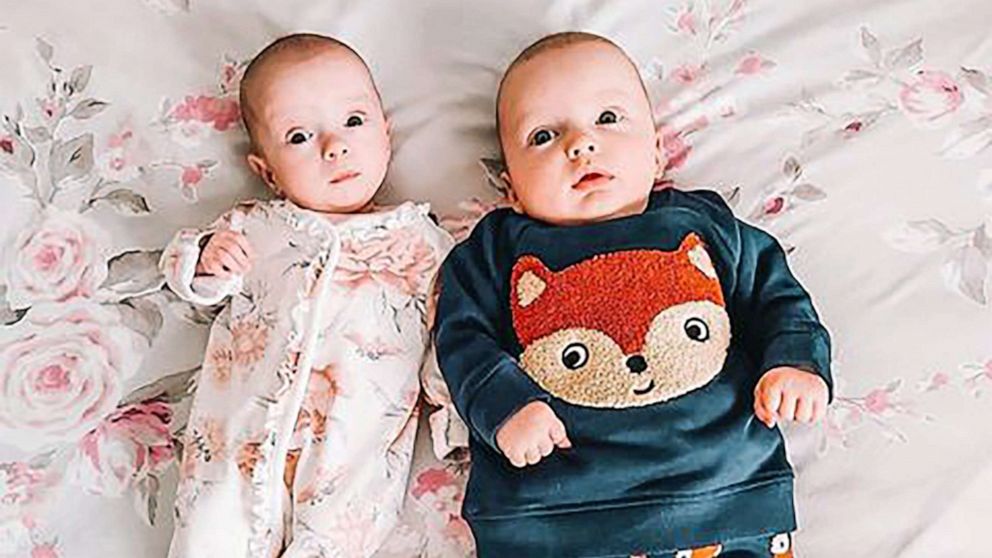 Courtesy Rebecca Roberts
Twins Noah and Rosalie were born on the same day but were conceived at different points.

When Roberts was 33 weeks pregnant, doctors induced labor because Rosalie had stopped growing properly due to a problem with her umbilical cord.

MORE: Mom hits 'twin lottery' with two sets of twins in one year

"She was only a 30-week gestation baby who hadn’t grown properly at the end," Roberts said of Rosalie. "Her placenta never really grew properly."

Rosalie spent the next 95 days in the neo-natal intensive care unit (NICU), while her brother Noah spent just over three weeks at a different NICU.

The family was finally reunited just before Christmas, when Rosalie came home. 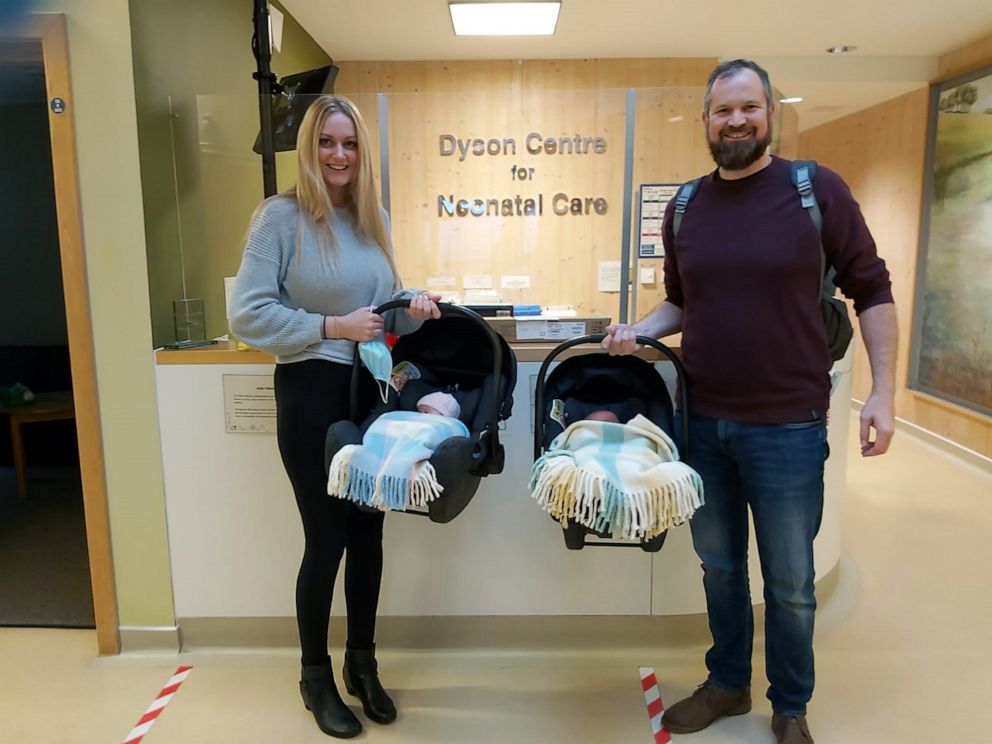 "I wanted another child for years and years and years and I waited for the right guy to come along and then I met Rhys and we fell in love and we wanted a baby and we were trying for ages to have one and we couldn’t get pregnant," she added. "Then we got pregnant and were blessed with two babies. It’s like, wow, this was worth waiting for."

Roberts said she sees an incredible bond already between Noah and Rosalie, who is growing and catching up to her brother in size.

"When we lay them down next to each other, it’s like they instantly know and they reach out and touch each other’s faces and it’s just the most beautiful thing," she said. "Twins have an amazing bond anyways but the story between these two, when they’re old enough to find out, they’ll feel even more special."